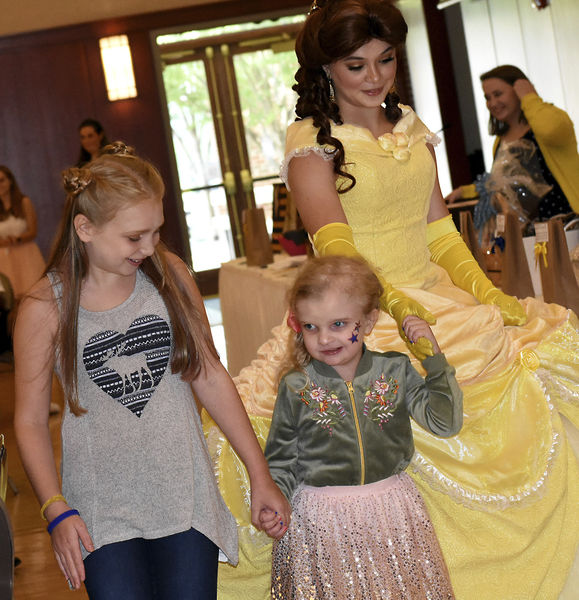 Tammy Shriver/Times West Virginian Endsley Batton, left, Ziler Hawkins and the Book Princess walk together during the fashion portion of the Da’Sean Butler and West Virginia University a Moment of Magic and Hoops for Hope Brunch. 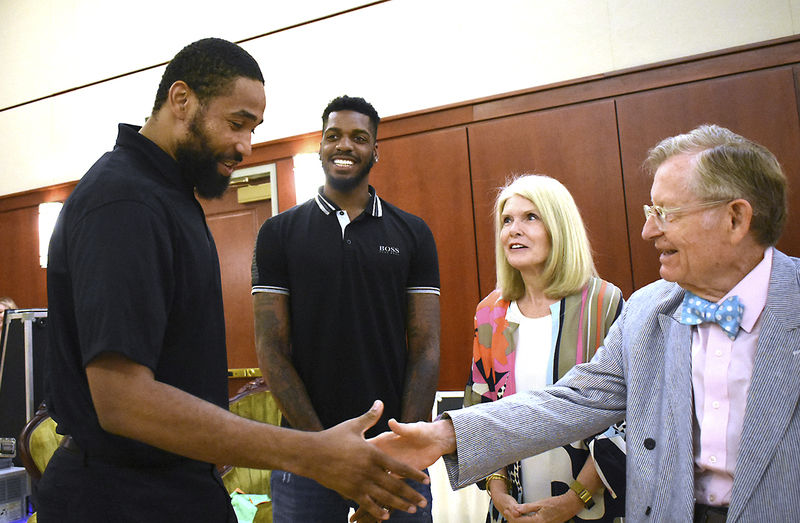 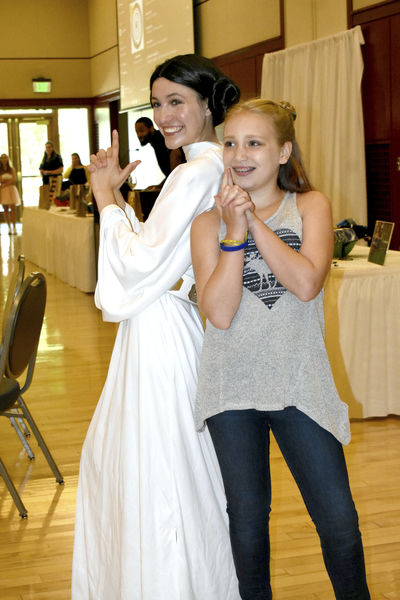 Tammy Shriver/Times West Virginian The Space Princess and Endsley Batton strike a pose during the fashion show portion of the Da’Sean Butler and West Virginia University a Moment of Magic and Hoops for Hope Brunch at the Erickson Alumni Center in Morgantown. Batton, 13, is a survivor of soft-tissue cancer rhabdomyosarcoma. 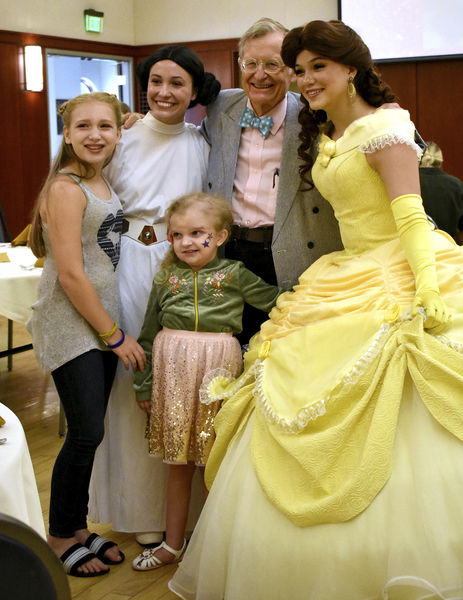 Tammy Shriver/Times West Virginian Endsley Batton, left, Ziler Hawkins and the Book Princess walk together during the fashion portion of the Da’Sean Butler and West Virginia University a Moment of Magic and Hoops for Hope Brunch.

Tammy Shriver/Times West Virginian The Space Princess and Endsley Batton strike a pose during the fashion show portion of the Da’Sean Butler and West Virginia University a Moment of Magic and Hoops for Hope Brunch at the Erickson Alumni Center in Morgantown. Batton, 13, is a survivor of soft-tissue cancer rhabdomyosarcoma.

morgantown — The smile Ziler Hawkins gave was blinding as she walked into the ballroom of the Erickson Alumni Center to tackle the runway.

Her blonde curls draped over her shoulder, purple stars lined her cheek, and a pink sequined skirt draped over her knees, Hawkins lapped the perimeter of the room 12 times as a slideshow of pictures of children posing with their favorite characters in hospital rooms rolled on elevated screens. At a table, Kim and Keith Hawkins watched their 7-year-old daughter forget about how she had already undergone 15 brain surgeries and five shunt replacements by the time she was 5 years old.

“In general, she lets it roll off her back. She doesn’t know she’s different than anybody else,” Kim said. “But it does make her feel special that she gets to be a part of it and be with these characters.”

Since she was 6 months old, Ziler has lived with hydrocephalus, a condition where the brain can’t drain water. She was joined by 13-year-old Endsley Batton, who is a survivor of soft-tissue cancer rhabdomyosarcoma, as one of the guests of honor at the first-ever “A Moment of Magic Foundation” fundraising brunch. The West Virginia chapter of the national nonprofit partnered with the “Give a Hoop Foundation,” founded three years ago by Da’Sean Butler, a former WVU men’s basketball player and current forward for the Hapoel Jerusalem Basketball Club, to raise money for both children’s organizations.

“A Moment of Magic Foundation” was founded five years ago by Kylee McGrane and Margaret McAndrew at Mount Saint Vincent College, and upon graduation was launched nationally.

The organization’s mission encourages college students to volunteer at children’s hospitals and other social service institutions to provide creative programming to children who are living with medical vulnerabilities.

Since its inception in 2014, the organization has grown to include 21 chapters across the country. WVU “A Moment of Magic Foundation” Chapter President Marra Sigler became inspired to start a chapter at WVU when her mom sent her a link to a “Today Show” segment about the nonprofit.

“I love kids,” Sigler said. “Every employment, every job I’ve ever had has been with kids. And being a princess is really cool, too. Combining them was really exciting.”

The WVU chapter, Sigler said, has about 80 members. The students often go to Ruby Memorial Hospital — branching out occasionally to hospitals in Maryland, Virginia, and Pennsylvania — and visit the children dressed as comic book and princess characters to help the kids take their mind off their illness and “just be a kid.”

They also participated in MountaineerThon and the Penn State IFC/Panhellenic Dance Marathon, both of which raise funds for children in need of special medical care who could otherwise not afford it.

“Having people come in and visit is a bright spot,” said Kim. “When you’re so sick and you’re so sad, to have someone come in — a favorite character — it just makes a huge difference to see that smile on their face because they don’t have a lot to look forward to.”

Growing up in Newark, N.J., Butler didn’t have a lot. But helping other people was something that was instilled in him at a young age.

Butler said his grandmother raised him in the church, and when his grandfather had a stroke, they didn’t have money to have people come and assist him, so the caretaking fell to Butler. He said he learned to build his days around helping as many people as he possibly could, a trait that stayed with him through high school and college.

“You grow up and you figure out what kind of person you want to be. I want to be somebody that is able to help and not hurt and build and help the kids,” Butler said.

Butler started the Give a Hoop Foundation to give back to the community and people that give him so much.

“I know how many people had to help me get to where I am today, so I figured, ‘Why not give back and help out as much as I possibly can,’” Butler said.

This vision paired “beautifully,” according to Butler’s mother-in-law and Morgantown coordinator Evie Brantmayer, with Give a Hoop, which aims to provide disadvantaged children with necessities such as school supplies, clothing, and athletic equipment.

Sigler reached out to Butler about partnering with the organization after she saw a tweet from Butler in late December about his charity. Brantmayer, who received Sigler’s email inquiry, was eager for the opportunity to unite the two causes.

“We were looking for someone to partner with, and this was the result,” Brantmayer said. “Really, Marra and AMoM, they did everything. They set everything up, and they just did an amazing job.”

The idea for the brunch, the first one Sigler ever coordinated, came about during brainstorming sessions with Brantmayer. Butler said he and his wife, Meg, sit down about once or twice a week to develop new avenues for fundraising and new ways of giving that money back to those who can use it, and added his wife and his mother-in-law “set this up perfectly.”

“Ever since I started this, I wanted to work with WVU sports in some capacity,” Sigler said. “I grew up watching Da’Sean play basketball, and I’ve always wanted to somehow do this.”

“We literally are here to assist them,” Butler said. “Once I heard we were a part of this, what they did as far as what they do there every day is about making kids happy, especially when we’re talking about kids that have every reason in the world not to be happy. Their job is to put smiles on those kids’ faces and make them feel better for a day, and I was like, ‘I’d be stupid to not do this, because that’s what I want to do.’”

The brunch featured a silent auction for items ranging from fishing poles and gift cards to Mountaineer memorabilia to raise money in addition to tickets for the event. “Where I grew up, you see a lot of kids growing up without the necessities that they need to get by in life,” John Flowers said. “It’s good that Da’Sean is willing to give back to the kids that don’t have those things. It definitely hits close to home, and I think it’s great that Da’Sean is doing this.”

Sigler, fundraising chair Cara Laswell, and off-campus coordinator Aly Coppage (a member of the James Madison University chapter), secured donations for the raffle. However, Sigler made sure that every detail was coordinated around making sure attendees knew the event was for the children, including creating the slideshow.

“It’s really nice to see an even more direct impact,” said Laswell, a Fairmont native. “Even when we go far away, sometimes we go to D.C. or Virginia, it’s such a warm feeling to see the reaction that kids get when they see their favorite person.”

“They’re really the stars of it all,” Sigler said. “We have special seats for them, they got a whole brand-new outfit, they got a makeover, they have their favorite characters here. This is really all about them, them being here.”