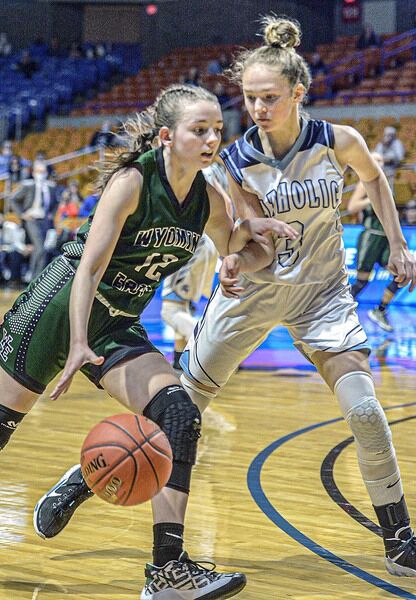 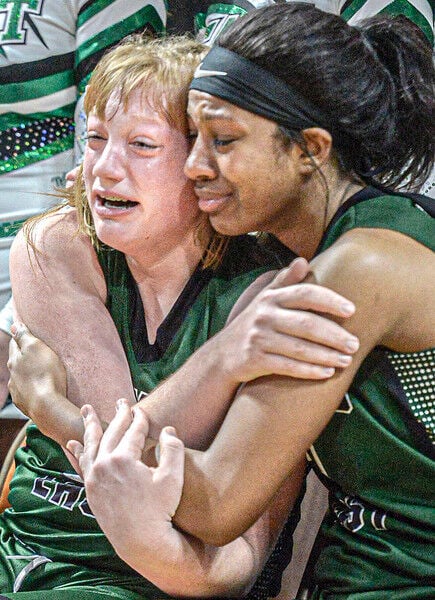 CHARLESTON — Two years ago, there was a more somber tone in the Wyoming East program.

Shoulder to shoulder, sitting to the left of coach Angie Boninsegna, tears filled the eyes of seniors Jazz Blankenship, Emily Saunders and then-sophomore Skylar Davidson at the podium following a 51-39 loss to Fairmont Senior in the Class AA title game.

In the midst of the most painful moment of their careers, the senior Lady Warriors were looking forward to the program's future.

“I remember my freshman year when we came back home and everybody was out there,” Saunders said then. “A lot of those girls were in fifth grade then and they’re in eighth grade now and are going to start working out with us over the summer. They really do look up to us, and watching us do this. They want to be a part of this. It’s great inspiration.”

A part of it they were.

For seven of the eight members of this team that saw heavy minutes during their run — Sarah Saunders, Hannah Blankenship, Daisha Summers, Kayley Bane, Abby Russell, Madison Clark, Colleen Lookabill — the memories of that championship game five years ago are fresh.

"I've always looked up to Jazz my entire life, so she usually gives me pointers," Hannah Blankenship said. "I take that to heart because I know she sees how I play and she gives me an honest opinion. Like, I was in middle school and I followed the bus home when they won states and it was just amazing.

"It was just an amazing experience even for me and I wasn't a part of the team. I remember as soon as they crossed the county line they were everywhere. I just kept telling the girls that you guys want to experience that. That's just something special. "

Being a part of that parade and wanting that experience for themselves has been a driving factor for this East team which played a freshman (Clark), three sophomores (Lookabill, Bane and Russell) and two juniors (Blankenship and Summers).

Of course, the ties are deep.

Sarah Saunders' sister Emily was a freshman on the 2016 team. Abby Russell's sister Brooke played on the 2018 and 2019 teams, averaging a double-double in the 2019 state tournament.

"We've been blessed at East the last six or seven years and the kids stay around," Boninsegna said. "We've got a lot of siblings — Sarah and Emily, Abby and Brooke. They've been good role models for our kids. These kids will continue to be good role models for the kids coming up. They're good people and that's the main deal."

Emily is at Tennessee, but Jazz Blankenship (Concord) and Brooke Russell (Bluefield) joined the East support staff after their respective collegiate seasons ended. Due to the pandemic, their seasons ended as the high school season began, affording them the luxury to do so.

"I had basically grew up with the upperclassmen when I was here," a grinning Blankenship said. "I texted Angie and I was like, 'Ang, our seasons are completely different this year. Get me in there!' and she told me she got me. I really wanted to be around these girls. I knew it was going to be a year for them and I wanted to be there.

"These girls really bought into the roles that they were given when they joined this team. they've worked so hard to get better. To see them improve from what they were coming out of middle school to what they are now, it's amazing. You wouldn't even recognize some of these girls if you had watched them. This feeling they're feeling tonight, they'll never forget it."

Having those players around has been beneficial. This group has credited them not only for the motivation to carry the torch, but the improvement they've made to help them do so.

"I've known them like all my life," Russell said. "I watched the championship game when they won it in 2016 and I was like, 'I want to do that, too' and we worked so hard to get up here. And now we're here and it's because they've worked with us throughout the season and even before it."

Much like her predecessors, Russell is already eyeing the future. The sophomore will be a focal point of East's team next year as they hope to repeat and inspire the next generation.

"I've got to be a leader like Sky is," Russell said. "I want to get the team together over the summer and work really hard with everybody so we can do it again."