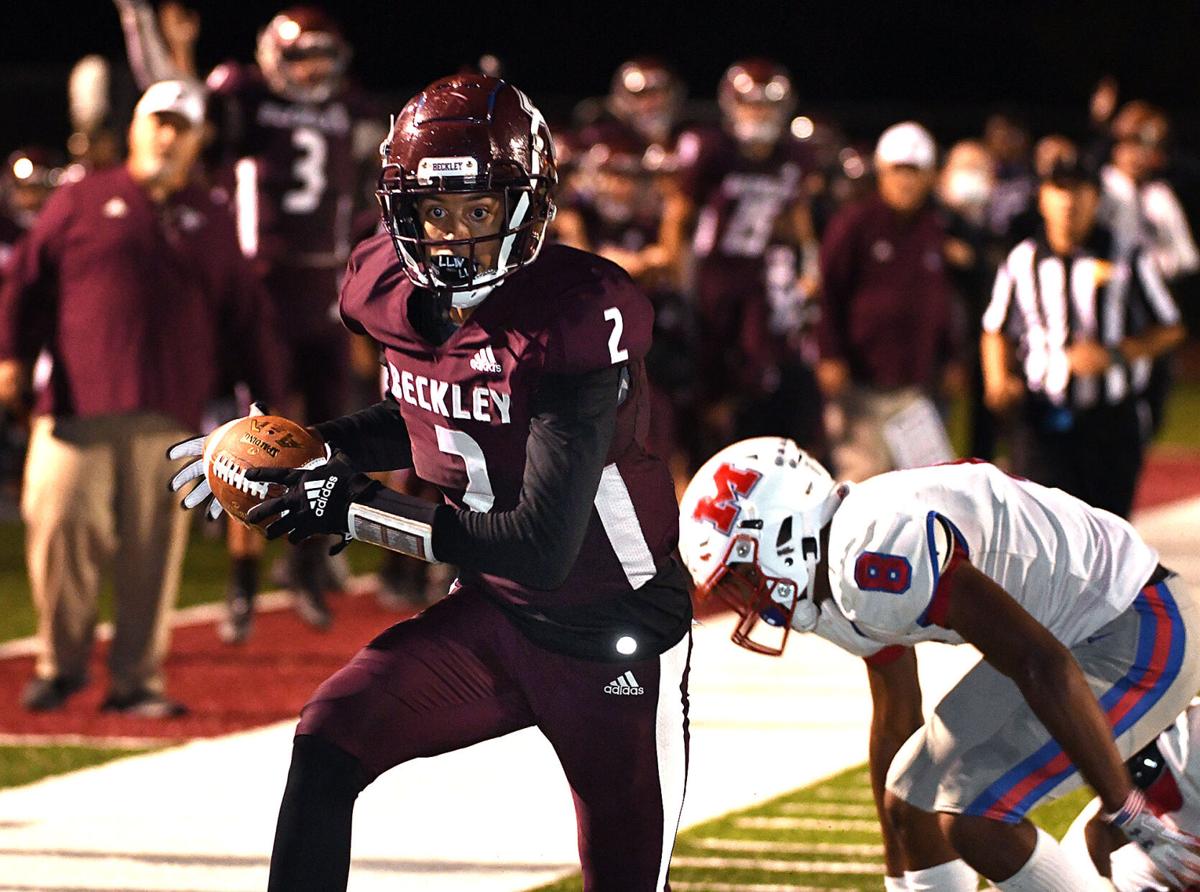 Keynan Cook, of Woodrow Wilson, left, caught a pass against Brodrick Washington, of Morgantown, in the second quarter for a touchdown during game held at Woodrow Wilson High School. (Rick Barbero/The Register-Herald) 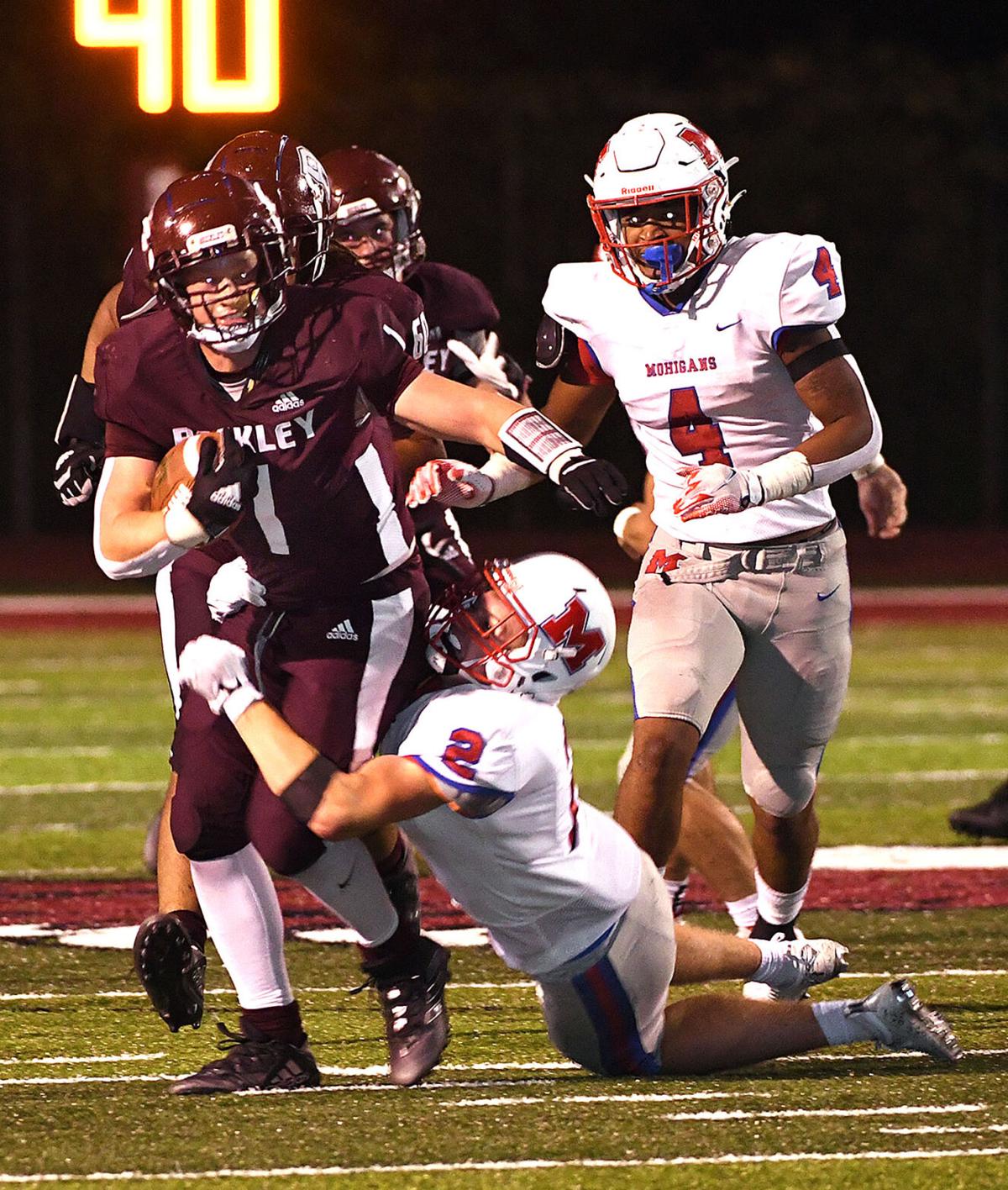 Maddox McMillen, of Woodrow Wilson, left, drags, Jarrett Lawrence, of Morgantown, for some extra yards in the first half during game held at Woodrow Wilson High School. (Rick Barbero/The Register-Herald)

Keynan Cook, of Woodrow Wilson, left, caught a pass against Brodrick Washington, of Morgantown, in the second quarter for a touchdown during game held at Woodrow Wilson High School. (Rick Barbero/The Register-Herald)

Maddox McMillen, of Woodrow Wilson, left, drags, Jarrett Lawrence, of Morgantown, for some extra yards in the first half during game held at Woodrow Wilson High School. (Rick Barbero/The Register-Herald)

In the not-too-distant past, Woodrow Wilson probably would have lost a game like the one that transpired Friday night.

But coach Street Sarrett sees something different this time around.

Tied 21-21 after regulation, Matthew Moore put the Flying Eagles ahead with a 20-yard touchdown run on the first play of overtime. Connor Mollohan’s PAT made it a seven-point game.

After getting to the one on their first OT play, the Mohigans gave the ball to Jarrett Lawrence, who brought the ball in to make the score 28-27. Morgantown elected to go for two, but Redfern cut Washington down at the eight-yard line to end the game.

“We got out there and we just went with we had been doing all night,” Sarrett said. “We ran that old power play off tackle. Matt Moore, that line blocked down, had some good blocks.”

“We were kind of depleted in the backfield. We were running out of backs and we figured if we had to go another offensive series we might not have enough guys in there, so we just decided we were going to go for it,” Morgantown coach Sean Biser said. “We called a play that had been working all night, they made a great play and hats off to them.”

Woodrow (2-2) now has two wins in a season for the first time since going 3-7 in 2018. Sarrett agreed this was a game his team might not have pulled out in recent seasons.

“Yeah, these kids have fought,” Sarrett said. “We had that bye week with Bluefield being out (a Covid-related cancellation last week), and we had two great weeks of practice. These guys, man, they turned it on. They really did.”

Woodrow overcame four turnovers. Morgantown (1-3) was only able to convert one into points — the first touchdown of the game, a 38-yard touchdown pass from Maddox Bowers to Jarrett Lawrence after an interception in the game’s first two minutes to put the Mohigans ahead 7-0 at the 10:15 mark.

After that, Woodrow changed its offensive attack and put Redfern at quarterback. Regular starter Maddex McMillen lined up as a ball carrier.

The Eagles moved the ball well in the scheme, with Moore, Jay Jones and McMillen running effectively through the night. The turnovers proved costly until the overtime finish.

“We prepared for it. We just didn’t play well,” Biser said.

“We had it planned during the week and I said, you know what, we’re going to test the waters and try to help our defense a little bit,” Sarrett said. “We just got out there and we pounded that ball like we always have when we get in that formation.

“The kids believe in it and our line was a lot better tonight. People talk about our line. I think they showed some people tonight that they’re growing up. We moved the ball and we could go in and out from wing-T double tight to five wide and switch our quarterback around. He’s running back, he’s quarterback, he’s throwing the ball. Great job tonight.”

Morgantown led 14-13 after the third quarter and went ahead 21-13 on Lawrence’s 24-yard run on the first play of the fourth quarter.

Woodrow later got the ball at its 44 with 7:44 to play and inserted McMillen back in at quarterback. The shift worked, with McMillen hitting a wide open Keynan Cook in the end zone for a 20-yard touchdown. Moore ran in the two-point conversion to tie the game at 21-21 with 4:07 left.

On the next drive, Cook intercepted Bowers at the Woodrow 49 and returned it to Morgantown’s 32. The ensuing series saw Woodrow line up for a 43-yard field goal attempt, but Mollohan’s kick was wide right.

Morgantown ran out the clock to set up overtime.

Moore ran 18 times for 76 yards and two touchdowns for Woodrow.

McMillen was 11-of-15 for 150 yard and two touchdowns. Both touchdowns went to Cook, the first a highlight catch in which he went up, batted the ball a couple of times, pulled it down and easily sped to the end zone to bring the Eagles to within 14-13 with 1:04 left in the first half.