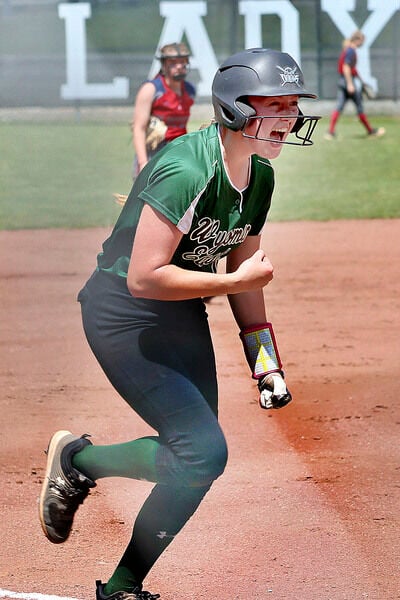 Wyoming East's Oliva Hylton celebrates after hitting a home run to put the Lady Warriors ahead 2-0. 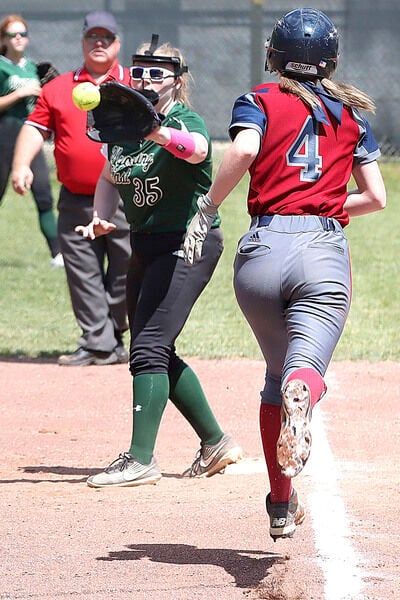 Wyoming East's Andrea Laxton makes a play to get Bluefield's Cara Brown out at first. 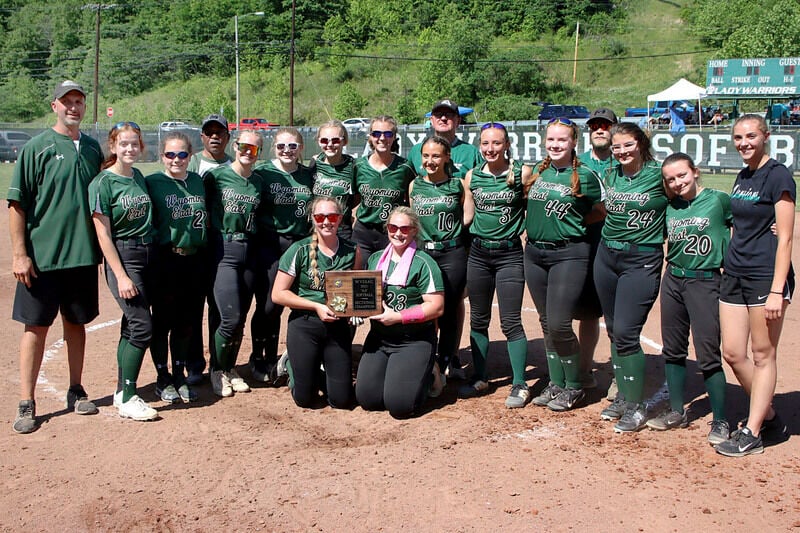 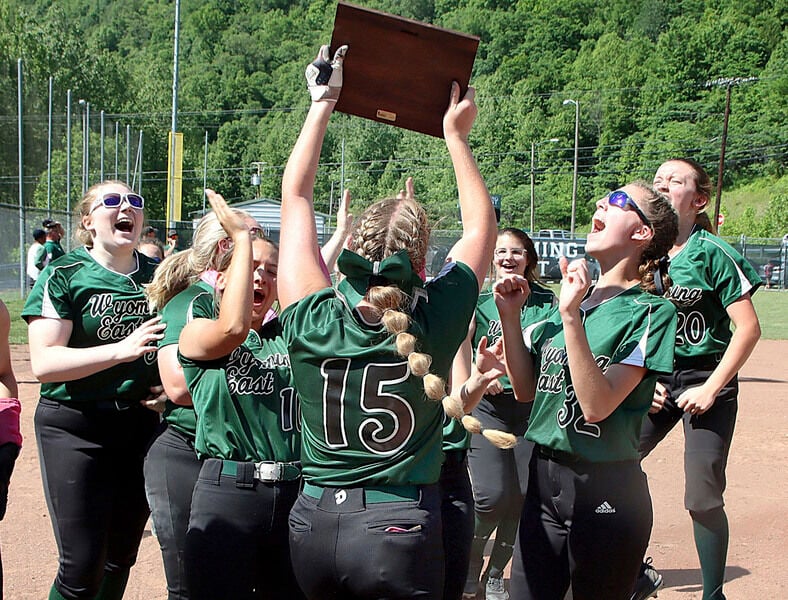 Wyoming East's Oliva Hylton celebrates after hitting a home run to put the Lady Warriors ahead 2-0.

Wyoming East's Andrea Laxton makes a play to get Bluefield's Cara Brown out at first.

NEW RICHMOND — Prior to the recent realignment, Wyoming East and Independence had waged some classic postseason sectional softball battles.

One day after the Patriots punched their ticket to the regionals from Section 2, the Warriors followed suit Saturday with a five-inning, 9-0 win over Bluefield to capture the Class AA Region 3 Section 1 title.

East's win Saturday was sparked by the outstanding play of Oliva Hylton, who allowed just one hit and drove in five runs to lead the Warriors.

In three sectional wins in the circle, Hylton allowed just one run and two hits, which included a perfect game against county rival Westside.

"I tell myself that not everything is in my control," Hylton said. "I have to do what I can do. I have to hit my spots, make sure my pitches are sharp and do everything I can do to throw it as hard as I can."

"When Liv pitches good, we normally hit decent enough to win. When she hit that home run, the game was over," Wyoming East head coach Robert "Doc" Warner said. "I knew the rest of them would hit then. Whenever we get the bottom of the order on base, we are tough."

Bluefield made some noise early when Abby Richardson blasted a one-hopper to the fence that resulted in a two-out triple.

However, it was the last noise made by the Beavers the rest of the way. If anything, it served as a wakeup call for Hylton.

The junior hurler squashed the Bluefield threat with a strikeout which started a run of 13 consecutive batters retired.

Hylton came to the plate with two outs in the bottom of the first inning and sent the Wyoming East crowd into a frenzy by blasting a shot over the left field fence for a two-run home run.

"I spent a lot of time in the cage the last two days which had paid off," Hylton said. "Before the game I told myself to focus, get up there and swing and let my bat do the work."

Trailing 2-0, the game took an odd twist for the visitors in the top of the third inning when it was ruled that a Bluefield player was using an illegal bat and had to be ejected.

"It was an illegal bat. We had played 22 games with it and I thought everyone was using a legal bat. That is my fault," Bluefield head coach Barry Reed said. "The score was 2-0 when all that happened. Looking back it may have been a much closer game if that hadn't happened. We will learn from it."

Wyoming East began to put the game out of reach in the bottom of the third when a single from Maddie Clark and two hit batters loaded the bases for Hylton.

Hylton's double brought home two runs before Kayley Bane scored on a wild pitch for the third run of the inning.

Andrea Laxton singled home another run and later scored on a wild pitch to make it a 7-0 Wyoming East lead after three innings.

The closest the Beavers came to another hit off Hylton was a bloop fly over first base in the fourth inning off the bat of Gracey Rockness.

What looked to be a sure hit just inside the foul line was erased on a diving catch from right fielder Makayla King for the first out of the inning.

The Warriors scored the final two runs in the bottom of the fourth on a sacrifice fly from Paige Laxton and an RBI-single from Hylton, her third hit in as many trips to the plate.

Fielding a young team with no seniors and just two juniors, a sectional championship was not what Warner expected to start the season.

"I expected Westside to be here, really," Warner admitted. "We started (the season) playing Shady (Spring) and we played pretty good. When the basketball players came back and started playing, I thought we were going to be pretty good."

Warner was not the only coach surprised to be playing in the sectional championship. After years of struggle, Bluefield announced its arrival to the list of future softball contenders.

"We didn't play as good as I hoped we would have played today, but we were 16-6 this year and we have had a good year," Reed said. "We are trying to start a small tradition for softball at Bluefield High School. Hopefully the tradition has started and now we can take the next step."

Independence and Wyoming East will start the best--of-3 regional tournament Monday, June 14, in Coal City for the right to go to the state softball tournament.

Game 2 will be played in New Richmond with a third game in Coal City if needed.

The only meeting between the teams was a month ago, also in Coal City, which resulted in a 2-0 win for the Patriots.

"They have a really good pitcher. If we can't hit, it is going to be a long two days. When we played them last time we put the ball in play a few times," Warner said.