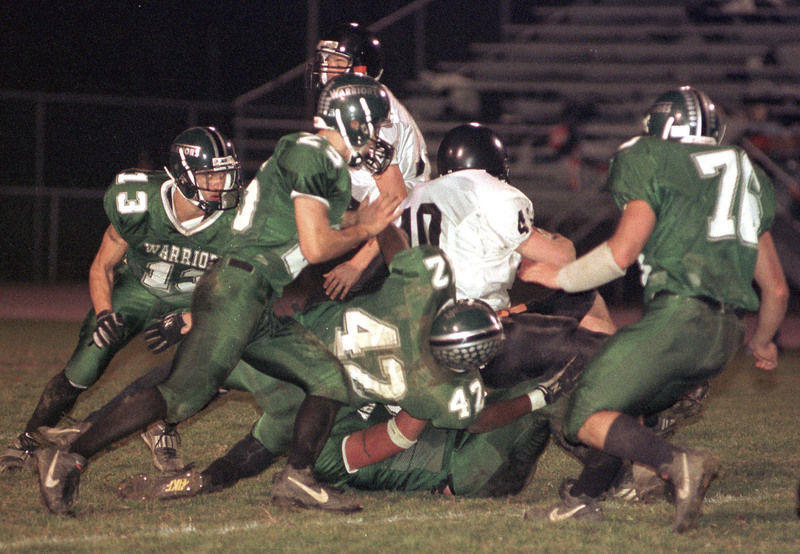 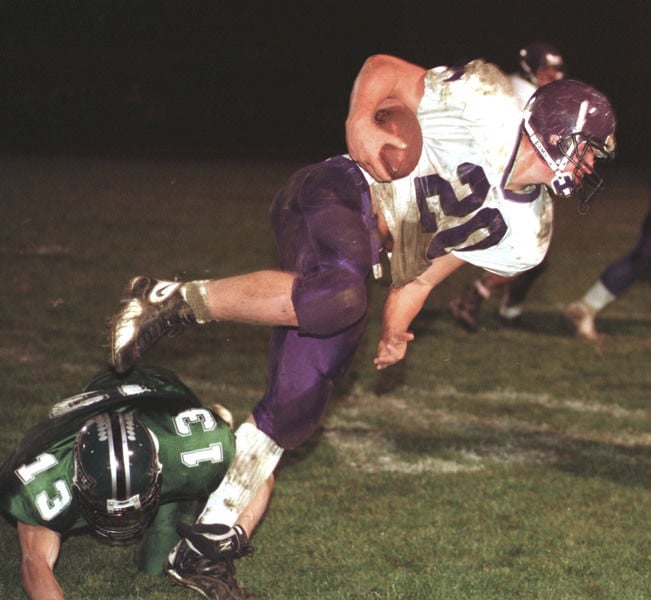 Editor’s note: “Remember When?” is a series highlighting the area’s most memorable performances, whether it be a game, season or individual player performance.

Hopes are high in New Richmond this year.

With the arrival of head coach Larry Thompson, the Wyoming East faithful have set their sights on Wheeling with championship aspirations. In some corners, this is the most optimistic the community has been since 1999 when the program won the Class AA state championship.

For those who remember the '99 team, there were plenty of highlights, as expected. The team ultimately finished 14-0. A 76-12 demolition of Sherman in the quarterfinals, in which the Warriors compiled nearly 500 yards on the ground, ranks near the top.

But perhaps the most memorable game was the one in which the Warriors faced the most adversity against what has become a familiar foe. This week the Warriors will renew their rivalry with that foe, James Monroe.

It was Nov. 26, 1999, and Wyoming East was rolling. The Warriors were fresh off a dominating performance against Sherman, in which they rushed for a playoff-record 493 yards. That victory was a reflection of Wyoming East's season — the only one-score game it played was a 27-26 overtime win against Iaeger to open the season.

Despite their dominance, the Warriors weren't taking their undefeated foes lightly.

The Mavericks entered the semifinal matchup with a pristine 11-0 record, looking for the first title game berth in school history.

"We didn't see them that year, but we heard they were supposed to be pretty bad to the bone," said Tank Tunstalle, a sophomore running back for Wyoming East that season. "We expected to see run after run. We expected a heavy dose of a kid named Ben Thornton. I think we had one video on them, but most of what we had was from our coach's standpoint. For me, I played deep safety and I knew I had (Huff Award winner) Ashley McNeely in front of me. Nothing usually got past him, so I was good."

The Warriors were playing in their home away from home, Van Meter Stadium in Beckley, since their field at Mullens High School was not playoff approved.

"We didn't have the field at East at the time so we played our regular season games at Mullens," Wyoming East head coach Kevin Grogg said. "It was approved to host Class A playoff games, but not AA. The atmosphere, though, was something else. I'll never forget it. It was the biggest crowd that ever watched a game at that stadium. It was packed."

"It gave me chills," Tunstalle said. "That was different than anything we had ever played in before."

If there were any nerves on the Warriors' part, they didn't show.

Tunstalle opened the scoring with a 63-yard punt return in the first quarter, answered by James Monroe shortly thereafter with a Jason Dowdy receiving touchdown.

Afterward, Wyoming East started to pull away. A touchdown pass from Robert Gunter to Jeremy Clark and a field goal from Grogg's son, Justin, made it a 17-6 game at the break. East kept rolling in the third quarter when Gunter ran it in from 13 yards out, giving the Warriors a 23-6 lead.

"It surprised me," Grogg said. "They were a really good team, so we didn't expect to jump out to a start like that."

"Our thought process was to not take our foot off the gas," Tunstalle said. "Throughout the season we knew if we can keep rolling, they end up quitting. These boys were made for this, though."

James Monroe head coach Don Jackson consulted with Thornton and quarterback Matt Dixon to brainstorm a solution to get back in the game. They found one that worked.

"It was kind of a mutual agreement to put me back there at quarterback," Thornton said. "Coach Jackson pulled us aside and asked for our opinion. We kind of agreed to start going deeper. We had a spread offense, which wasn't something you saw a lot of back then. We didn't get that deep into it, either. We were kind of like (Wyoming East), where we didn't really have much of a challenge throughout the year to get too deep into it."

"They put Thornton at quarterback and we had never seen this," Tunstalle said. "We knew he could run, but he could throw it, too, and we didn't know that and we weren't prepared for that. We came up in the box to help with the run and he took advantage of that. He was a man among boys and we had never seen anything like him."

"We had seen them do that throughout the year some on tape," Grogg said. "We were prepared for it, but when they put him in there, he just ate us up. I think we stopped one drive at the end to get the ball back. I think that's the only time we stopped them. We didn't have an answer for him."

After the change, Thornton led the Mavericks to 18 straight points, throwing a 50-yard touchdown pass and rushing for another, while also breaking off a 35-yard run that set up a 1-yard score by Dixon.

With 3:28 remaining, Thornton's five-yard rushing touchdown gave the Mavericks a 24-23 lead, followed by an unsuccessful two-point conversion attempt. At that point Grogg was panicked, but his team wasn't.

"It was the complete opposite," Grogg said. "I panicked and they didn't after they cut the lead. The kids were saying don't worry, we got it. They were confident. Nobody was shook."

Following the score, Wyoming East began its methodical march with great field position, starting the drive at its own 41.

At that point, with the clock ticking, the Warriors stayed true to who they were, moving the ball on the ground. The sophomore Tunstalle opened the drive with a 10-yard run to move East into James Monroe territory, then, on second-and-10, came the gut punch. A 21-yard run from Tunstalle moved the Warriors into field goal range.

"Gunter looked me in my eyes and said, 'We're taking the ball down the field. Do not fumble, Tank,' and I knew that was it," Tunstalle said. "In my mind, I'm like 'OK, I got you.'"

"I knew it was over when Tank ran it down there," Grogg said. "It was over. My son was the kicker and he was first-team all-state kicking for three years and at that time held a state record for field goals made. He made one earlier in the game, too, so I knew we had it then and there."

The Warriors continued their march, riding Tunstalle — who accumulated 49 yards on the drive — to the Mavs' 5-yard line with under 30 seconds left. That was when Grogg played his ace.

The Warriors faked a run to Tunstalle off the right tackle and Gunter ran a bootleg to the left side of the field, diving to the pylon for the game-winning score with 23 seconds left.

"The play that Robert scored on, we put in the week before, so James Monroe had never seen it," Grogg said. "It caught them off guard. Robert wasn't what you'd call a mobile quarterback, but we put it in as a two-point conversion in case we needed it for one. We blocked it well. We ran Tank off tackle and faked it right and came back left. Ashley McNeely was the lead blocker and he had it blocked incredibly well."

The impact of Tunstalle on the final drive was what ultimately set up the winning score, as the Mavericks were keyed in on him.

"I'm not going to lie, I was on the side they ran the bootleg to," Thornton said. "They ran it right down our throat all drive and when they got close to scoring, it was a shock factor. When they got down into the red zone, we told ourselves we weren't going to let Tank score here and Kevin called a great play that took advantage of that."

Gunter's touchdown run was his second of the game, after rushing for only one throughout the entire regular season.

"All I was thinking was, 'Make it to the pylon,'" Gunter told The Register-Herald after the game. "It looked like Ashley (McNeely) wasn't sure which way to go, so I read it to the outside and just dove for the end zone."

Following the score, Jame Monroe was unable to answer, and the Warriors punched their only ticket to Wheeling.

"That is the best high school football game I've ever seen or been a part of," Grogg said. "It tops the championship game tenfold. They said it was the biggest crowd to ever watch a football game in that stadium. The crowd was crazy big. It was packed and the atmosphere was tremendous.

"Maybe if we had lost the championship game I would've looked at it differently, but it was the best thing I've seen, and we all thought that was the (de facto) championship game. There wasn't a doubt those were the two best teams in Class AA that year."

Wyoming East's encore was a 57-21 victory over Bluefield the following week for the program's only state championship in school history.

Following the season, Thornton was named the Class AA first-team all-state captain on offense and finished as the runner-up for the Kennedy Award. McNeely was named captain of the defense, while Gunter and Tunstalle secured second-team honors.

"The awards were nice, but we were more excited about making history," Tunstalle said. "In Wyoming County, when something big is going on, they shut down the whole town and throughout that season that's what we saw. We had so much support, even playing that game up in Beckley. The chance to go out there and make history was enough for us and I'm still proud of what we accomplished."