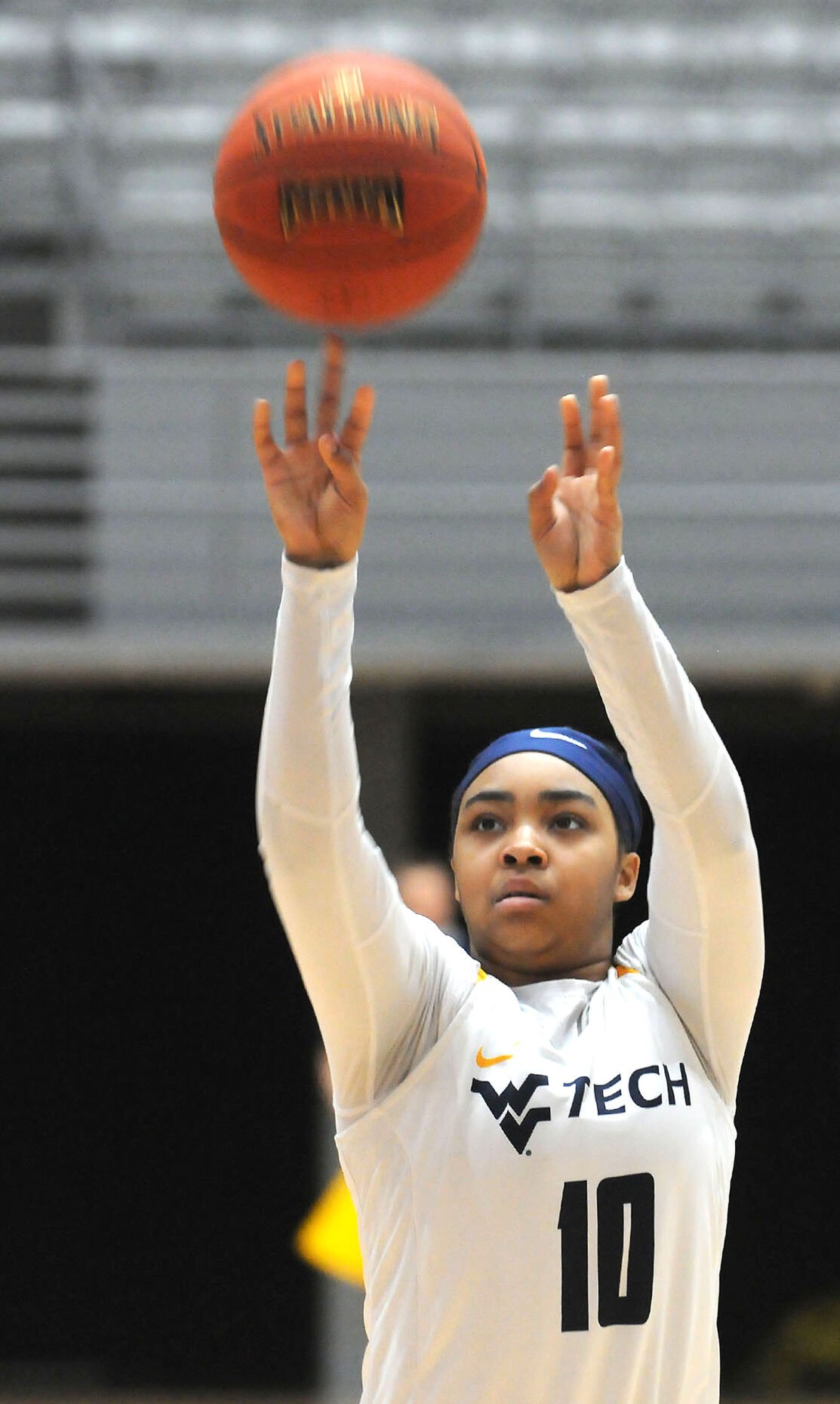 WVU Tech’s Alexandria Gray shoots from the top of the key during the first half against Potomac State College Friday in Beckley. 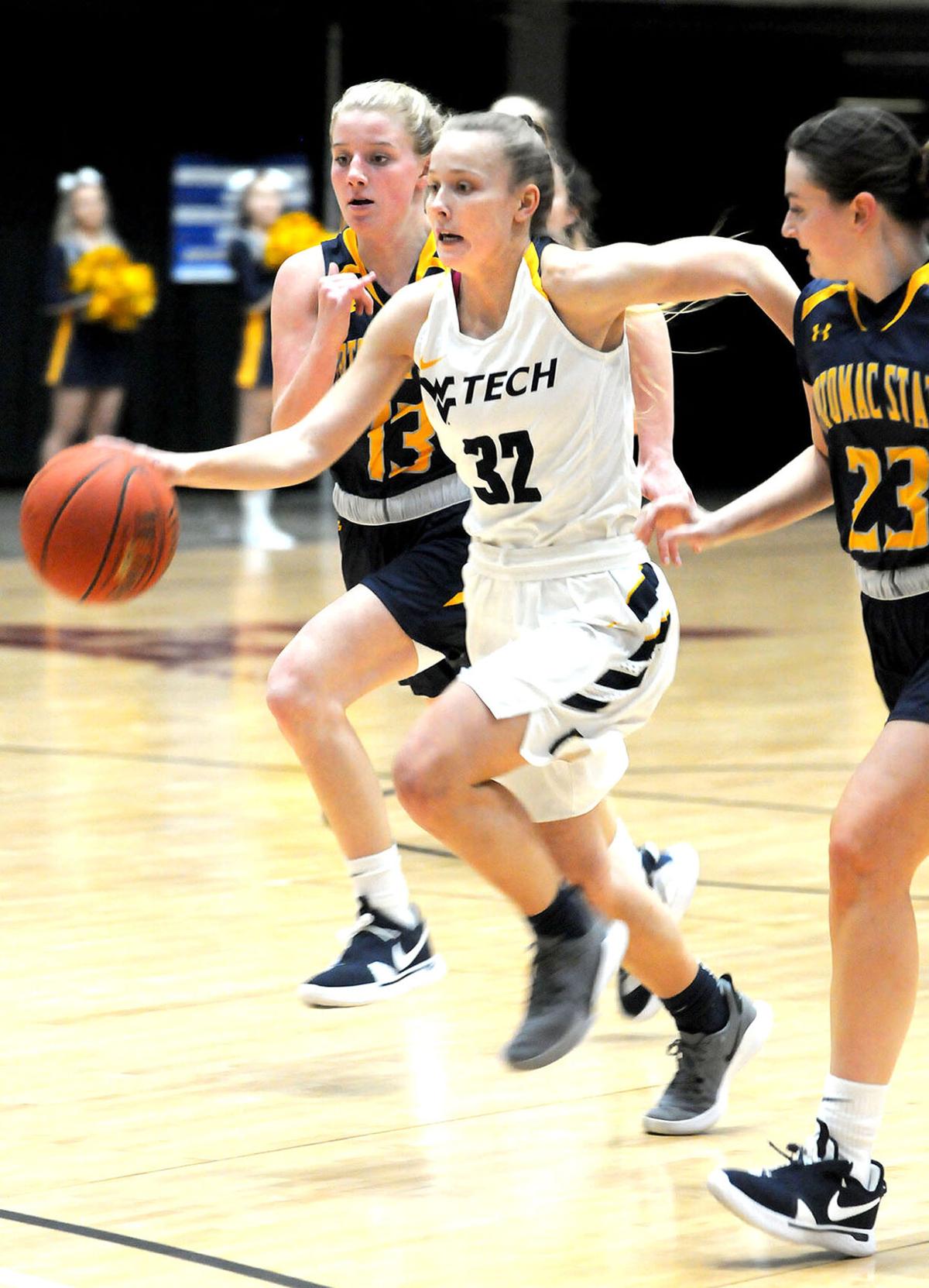 WVU Tech’s Alexandria Gray shoots from the top of the key during the first half against Potomac State College Friday in Beckley.

The first goal was to build momentum going into next week’s River States Conference Tournament. Second was to send seniors Alexandria Gray, Kathylee Pinnock Branford and Isabel Barrio out with a win on Senior Night.

Dominating the game with defense, which has become their calling card under coach Anna Kowalska, the home team converted steals and turnovers into offense to trounce Potomac State College 112-34.

When the final horn sounded, Tech had forced 34 turnovers and had frustrated the visitors with 20 steals.

"We wanted the seniors to have a great experience and also build momentum for the tournament Monday. That is what we did tonight," Kowalska said.

Unfortunately for the visitors, the lack of game experience showed.

Potomac State College could not match the speed or physical play of the Golden Bears, who scored on four of their first five trips, taking command early and never looking back.

Two 3-pointers from Barrio and one from Gray sparked a 10-0 run in the first three minutes.

Playing nearly the entire game, Barrio made the most of her opportunity by scoring 18 points, grabbing eight rebounds and handing out eight assists.

"With Izzy there is one thing about her, she always works hard in practice and she never gives up. She makes everyone else better because she practices so hard every day and I respect that," Kowalska said. "She has played four years for me and I couldn't be more proud of her. She is a straight-A student and a math major. Her work ethic is beyond what I expected when she came into the program. She is a great teammate and she just wants to win as a team."

A basket from McKenna Douthitt briefly cut the lead to eight, but that would be the only field goal of the first quarter for the Catamounts.

A jumper in the lane from Brittney Justice pushed the lead back to double figures, where it would stay the rest of the way.

Three free throws from Barrio and a couple of buckets from Whitney Justice made the lead 15 with just over two minutes left in the first quarter. The lead stood at 27-5 by the end of the quarter.

Battling her way back from an injury that has slowed her this season, Branford hit a step-back jumper and two free throws to give Tech its biggest lead of the opening 20 minutes at 38 points with just under a minute to go.

Like Barrio, Branford narrowly missed a triple-double with 20 points, 11 rebounds and eight assists.

"Last year she was a huge part of why we went to the Sweet 16. She had huge games for us and she has always been a winner," Kowalska said about Branford.

"Alex has gone through a lot. She had injuries early in her career, but she kept going, never quit and played four years for us. I appreciate that more than anything else," Kowalska said. "During her junior year she exploded and was a second-team all-conference player. She hit some huge shots for us last year. At nationals she hit two huge 3s from the corner that gave us a lead against Morningside. She is very talented."

The telling statistic again for the Golden Bears was how they shared the basketball, with 34 assists on 43 made baskets.

"They do like each other and get along well off of the court. I think the quarantine actually helped us to get along better," Kowalska said, smiling. "We impress upon them during practice that they have to share the basketball. We work on passing a lot and scoring in transition. One more pass may be the better one and I think they have that mentality."

Now the focus  turns to the RSC Tournament. WVU Tech, the No. 10 seed, will travel to No. 11 Carlow for a 6 p.m. battle Monday. If the Golden Bears win, they will host No. 9 Midway on Wednesday.

"We have to play defense, we have to rebound and, third, we need to have production from every position. If we do that, we can go pretty far," Kowalska said. "It is a long route and there are several really good teams this year. We lost at Point Park and at Rio (Grande), but we didn't have a chance to play a lot of teams in the conference. That will make the tournament even more interesting. It will be a challenging tournament."