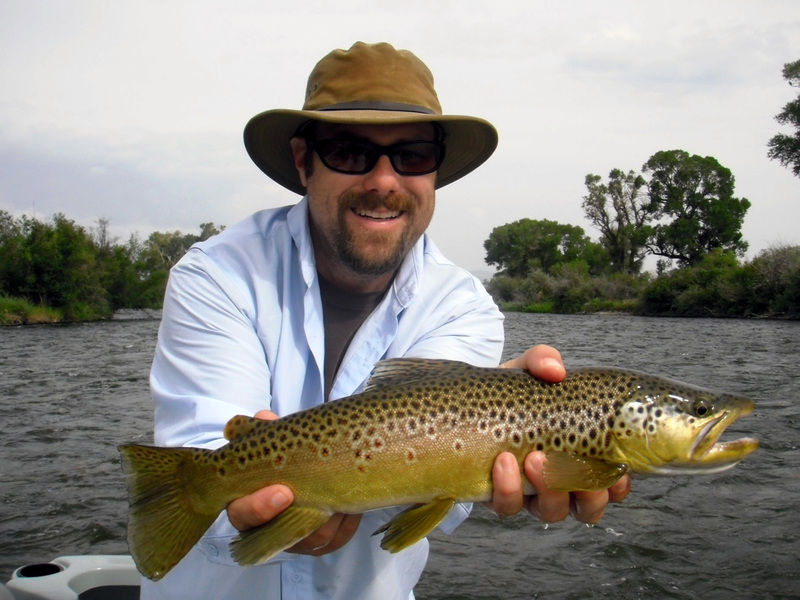 Tara Ferguson/For The Register-HeraldWriter Clint Ferguson holds an 18-inch brown trout he caught on his fishing trip in the Rocky Mountains. 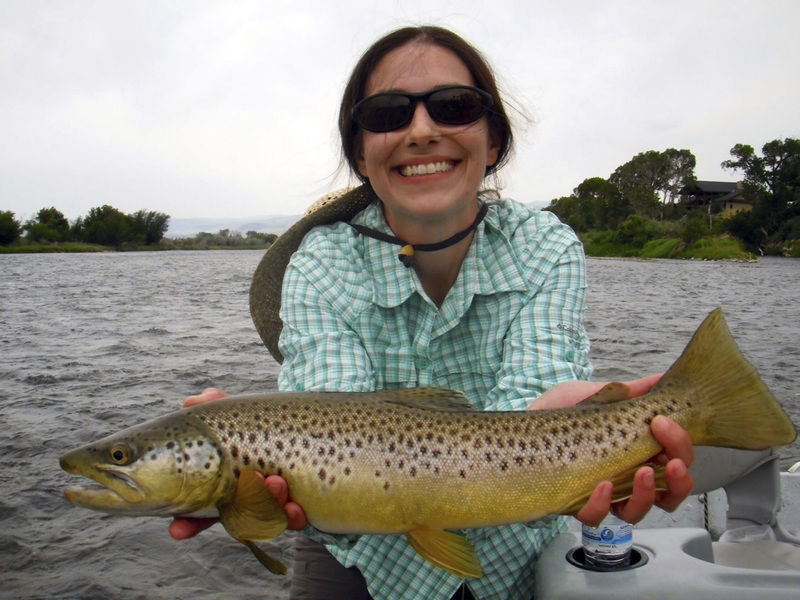 Tara Ferguson/For The Register-HeraldWriter Clint Ferguson holds an 18-inch brown trout he caught on his fishing trip in the Rocky Mountains.

In my last column Tara and I were roaming around in the Rocky Mountains catching a few trout along the way. On our fourth day we ventured over to Ennis and the Madison River Valley. The Madison River is probably one of the most talked-about rivers in Montana, and for good reason, with several miles of quality trout water and breathtaking scenery every direction you look.

Once again we met up with Cody, and drove up to Varney Bridge to start the float. Cody rigged us up with a big dry fly made out of foam known as the Chubby Chernobyl. This big fly imitates the nocturnal stoneflies that prowl along the banks at night. They’ll often fall onto the water and then skitter across the surface as this particular stonefly doesn’t have any wings and can’t fly. The big nocturnal stones are a tasty and irresistible meal for hungry trout below — especially for the bigger fish we hoped to catch.

Since it was still early in the morning, we started with the big dry flies, as the trout will still be looking for them. We no longer floated under Varney Bridge when I pitched my fly out about 10 foot off of the bank and a huge head came up and inhaled it. I set the hook and the fight was on. I knew it was a nice brown trout as I saw a flash of yellow when it turned. After a couple of runs I managed to get the trout’s head to the water’s surface and drug him into Cody’s net. It was a plump, 18-inch, hooked, jawed brown, not five minutes into the float.

“If it’s going to be like this all the way down through here, this could be epic,” I thought to myself. Of course you can also get the first fish on the first cast curse; that sometimes happens as well. The latter started to take course as things slowed up after a couple more feisty rainbows took the big dry. The wind picked up which the Madison is also known for in the wide open valley. Rain clouds hovered all around us and we thought for sure we were going to get wet but the rain missed us. With the wind we switched to a nymph rig and started fishing underneath. I picked up a couple more rainbows while Tara struggled in the back of the boat. It was one of those days when one of us had the hot hand and the other one fished hard with little results.

Thankfully for me, I had the hot hand. I’ve also been the one on the other end, and I really wanted Tara to catch a big fish. We traded places in the boat, but it didn’t matter as I managed a few more fish from the back. As the wind picked up even more, we switched to throwing streamers in hopes of catching some nice brown trout. We went through a slow stretch and started to round a bend when all of a sudden Tara’s rod doubled over. She thought she was hung up for a second then it moved and she realized it was a fish.

“Fish on!” Tara yelled. The fish stayed down at first, and we couldn’t see it, which usually means it’s a nice one. Tara kept pressure on the fish as we continued drifting down the river. Finally, the big fish came up and I saw the top of its tail fin. “Tara, that’s a nice brown!” I said, as she proceeded to tell me, “Shut up, until I get it in!” After a few tense seconds Tara worked the big brown to the boat and into the net. I think I was more excited than Tara because I knew it was going to be a long evening and night until then. It measured just shy of 21 inches and ended up being the big fish of the trip.

Needless to say we were all pumped after that. It’s amazing how one big fish can completely change the mood. We still had a mile left to float, and someone flipped the switch to the on position as it was nonstop fish-catching action to the take out. I caught three fish on three consecutive casts. It was that good! We fished hard all the way to Ennis and the end of our float. The last mile really brought our numbers up for the day and gave us the true Madison River experience.

After the long day we hit the sack for our last night in Twin Bridges. The next morning we woke up early and drove back to Ennis for breakfast. After that we went down the Madison River to the Valley Gardens section in hopes for some more nocturnal stonefly action. The river is wide here and braids out into several channels. It looks intimidating to cross the wide river but it isn’t too deep.

We started across the big river when Tara started to question me if we really needed to cross. “Hold on and follow me, there’s a good channel over there,” I told her as we continued pushing through the current. We made it across and found ourselves in the middle of a trico mayfly hatch, as there were thousands of them flying by. They are tiny mayflies, and the fish were eating them and ignoring our big flies. We only fished for an hour, as all we were seeing were small fish. Of course Tara had to give me an “I told you so” as we trudged back across the river. “We should have never crossed and saved some time,” she said, with which I reluctantly agreed. It was getting hot anyway so we decided to head over to the Gallatin River in the Big Sky area.

When we arrived and finally found a stretch nobody was fishing, I parked the rental vehicle and we walked to the river. It was ice cold, so we decided to wear our waders in which we hadn’t had to until then. I noticed everyone else was wearing waders on the Gallatin and after sticking a toe in I knew why. The spruce moths were starting to flutter around so that’s what we tied on to imitate them. Long story short, we fished a couple sections on the Gallatin and caught a couple rainbow trout before venturing back towards Bozeman for our last night. We ran up Portal Creek 3 miles into the mountains and caught a handful of westslope cutthroats along the way for the last fish of the trip.

The next day started out too early with a 6 a.m. flight only to arrive in Chicago for an almost 7 hour layover. Needless to say Tara and I walked and saw most of Chicago O’Hare airport. That was definitely enough people watching and being around the fast paced city life for me. I also noticed that people are rude nowadays and it seems to be getting worse. That’s all I have to say about that. I was more than ecstatic to touch down, put my feet in Almost Heaven and be back home again.