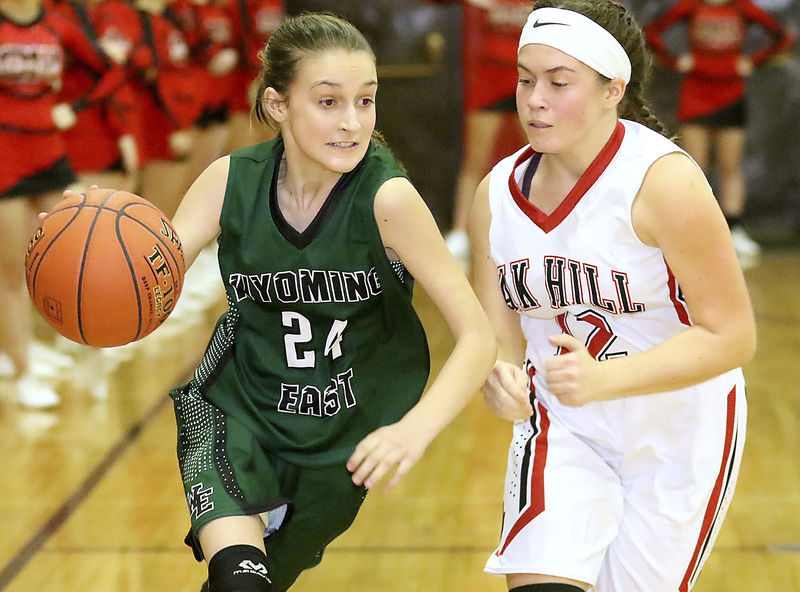 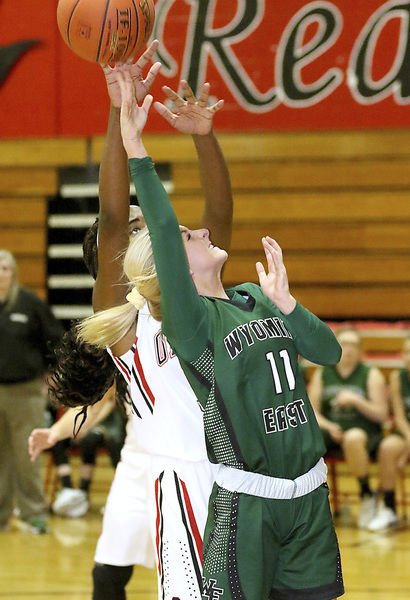 OAK HILL — Wyoming County has held a firm grip on the Class AA Region 3, Section 1 crown in recent years and it appears that Wyoming East and Westside are again the teams to beat.

However, a steadily improving Oak Hill program under head coach, Marshall Murray, entered the 2019-20 season hoping to put an end to the dominance of Wyoming County duo.

With three of the five games being played away from the Lilly Center, a home win against the Lady Warriors was much needed to kick off the rough stretch.

Unfortunately for the home team, Wyoming East showed it was not quite ready to hand over the crown.

Forcing 18 first-half turnovers, the Lady Warriors built a 16-point lead after the first quarter and led by 20 points at the break. When the final horn sounded, Wyoming East had completely frustrated Oak Hill in a 65-33 win.

“We came out really strong in the first quarter and I think it really helped set the tone of the game,” Wyoming East head coach Angie Boninsegna said. “We used our speed the best we could tonight. Skylar got off to a really good start and got some steals for us.”

One coaches happiness is often another coaches frustration and the Oak Hill coach had plenty to be frustrated about Thursday.

“I expected us to play a lot better than we did tonight. We didn’t execute our plays and we didn’t talk on defense,” Murray lamented. “Every time we drove (the basket), a girl stepped up and stopped us. We let (Wyoming East) score layups and we would stand there looking at them. I am very disappointed with this this effort tonight.”

All-state guard Skylar Davidson got Wyoming East rolling with two steals and converted them into layups. Hannah Blankenship made it a 6-0 East lead before Samiah Lynch finally got Oak Hill on the board, just over three minutes into the game.

“We haven’t played the calibre of Wyoming East so far this season and with (Skylar) back now, she runs everything and everybody is better when she is out there,” Murray said.

With Davidson moving the ball up the floor and finding the gaps in the lane, Daisha Summers feasted with six straight points.

With the frustration mounting for the Lady Red Devils, Davidson and Hannah Blankenship buried back-to-back 3s to cap a 13-0 run.

“Skylar threw two great passes underneath and we were able to convert,” Boninsegna said.

Davidson finished with a double-double over her 25 minutes of action, scoring 14 points and dishing out 12 assists to lead East.

Lynch gave Oak Hill some hope with two buckets, but, a 3 late in the quarter from Blankenship put the score at 22-6 after the first eight minutes.

The real frustrating part of the night for Oak Hill was its inability to exploit its advantage in the paint.

“We wouldn’t do it and when we finally did get it inside, we wanted to take the ball low,” Murray explained. “Then the opposite girl would come in and the ball was gone. We didn’t function well from the start tonight. We got caught up in their stuff and what they like to do. Mental breakdowns and not talking on defense kills you.”

Oak Hill’s big threat inside, Marcayla King, scored her first points with 7:03 to play before halftime. However, the Lady Red Devils would not score another field goal until 1:13 mark of the third quarter.

Relegated to points from the foul line, Oak Hill was outscored 24-10 to give East a commanding lead.

“We are getting better on defense, but, it is a process with us because we are so young,” Boninsegna said. “We need to get where we just react, not think and then react. We are not totally there yet, but we are in the process of getting there. It is a big jump for the freshman coming up from middle school.”

Summers scored 12 points for East and Blankenship had 11, all in limited minutes.

Wyoming East (6-3) is back in action at PikeView Tuesday, while Oak Hill (5-3) travels to Bluefield Monday.