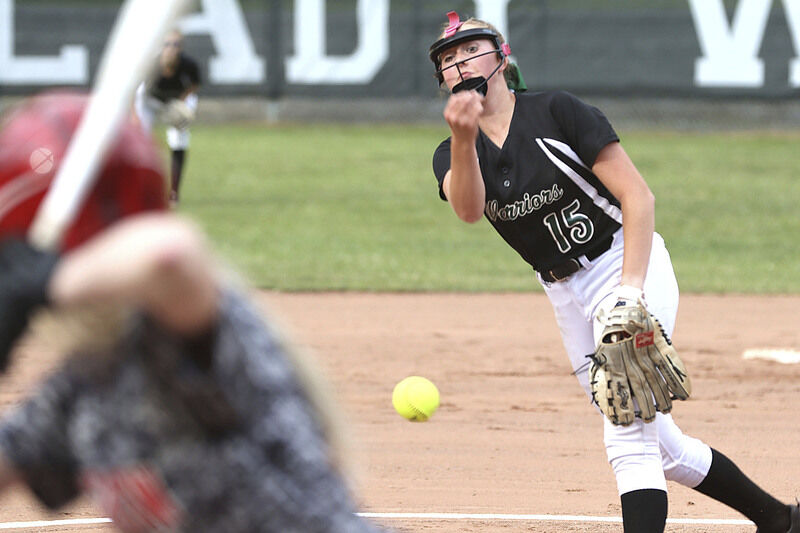 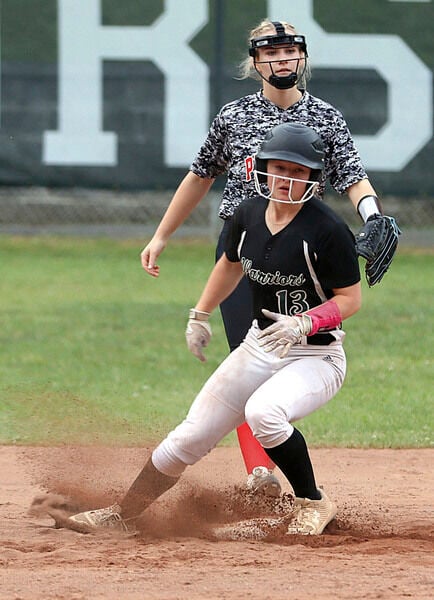 Wyoming East's Lilly Hill makes it to second for a double. 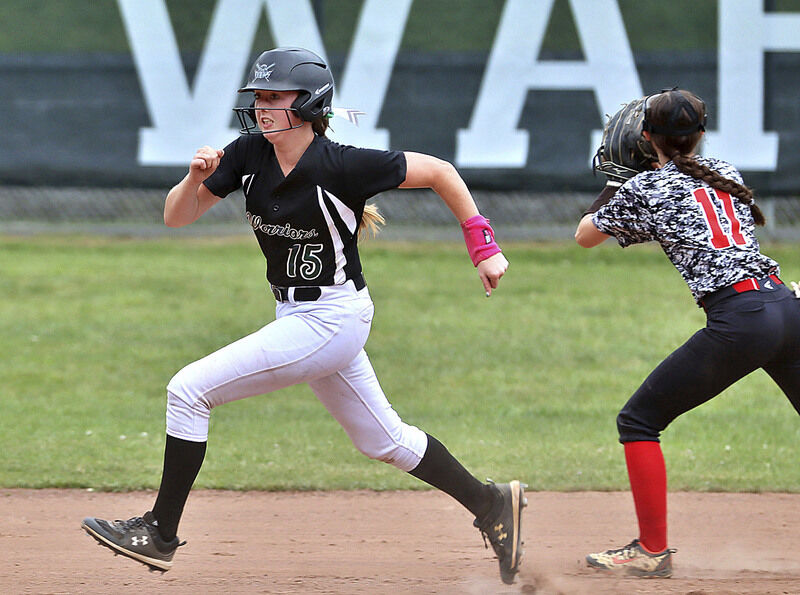 Wyoming East's Olivia Hylton rounds second on her way to an in the park home run against Pikeview putting Wyoming East ahead 3 to 1 in the first inning. 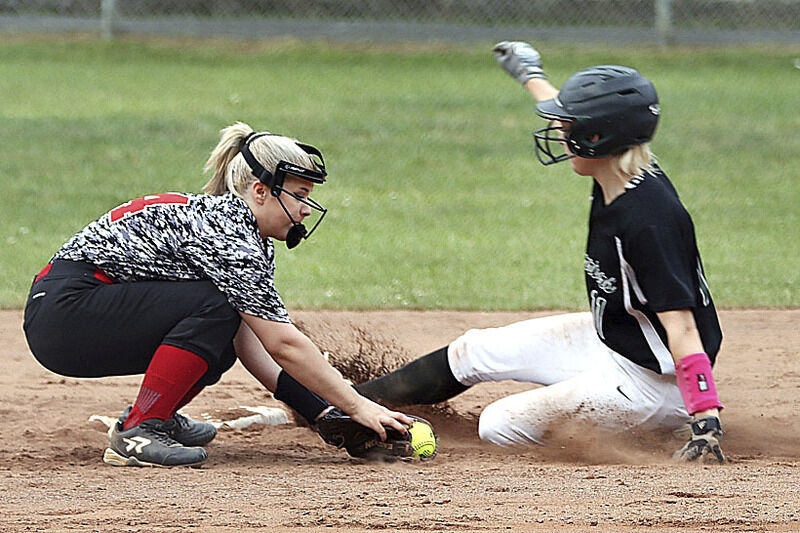 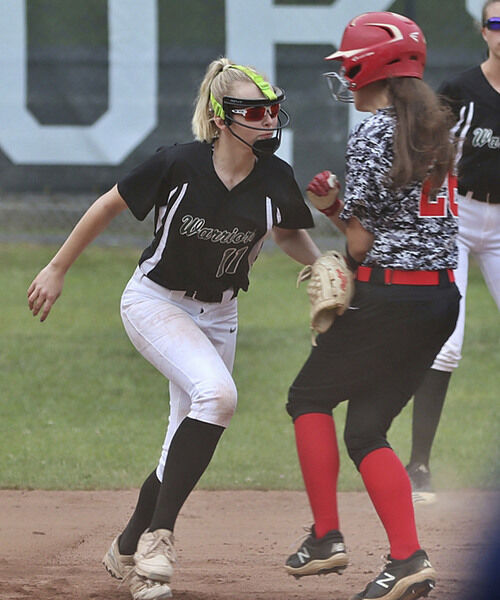 Wyoming East's Kayley Bane tags a runner on second to complete a double play in the third inning. 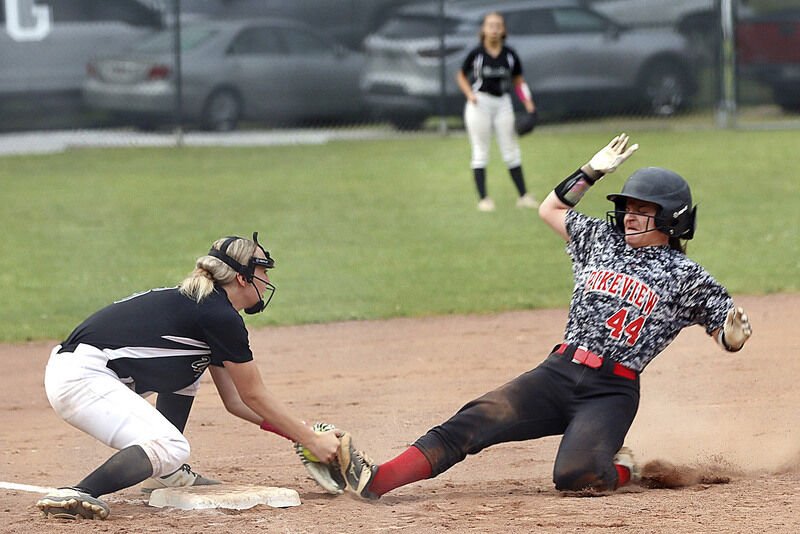 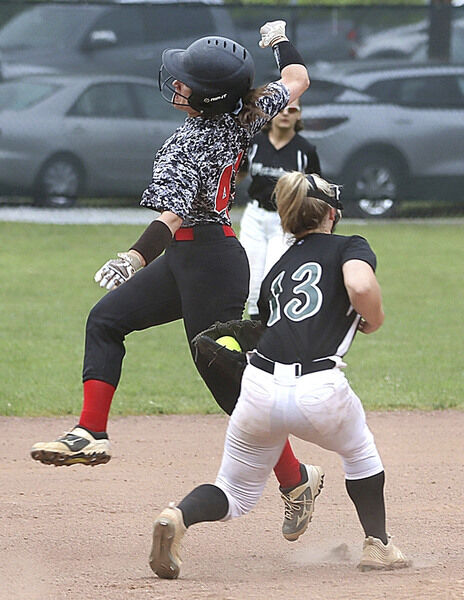 Lady Warrior Lilly Hill tags a runner out on third before throwing to second for the double play.Jim Cook/ for the Register-Herald

Wyoming East's Lilly Hill makes it to second for a double.

Wyoming East's Olivia Hylton rounds second on her way to an in the park home run against Pikeview putting Wyoming East ahead 3 to 1 in the first inning.

Wyoming East's Kayley Bane tags a runner on second to complete a double play in the third inning.

Lady Warrior Lilly Hill tags a runner out on third before throwing to second for the double play.Jim Cook/ for the Register-Herald

NEW RICHMOND — Wyoming East softball is no stranger to success in the postseason.

However, most of the players that generated that success have graduated leaving the Warriors with seven starters seeing sectional play for the first time.

Pounding out 10 hits over four innings to go along with a dominant pitching exhibition from junior Olyvia Hylton, Wyoming East (14-10) ran past PikeView 12-1 in five innings.

"We started out a little slow, but we kept putting the ball in play and (PikeView) made some mistakes," veteran Wyoming East head coach Robert "Doc" Warner said. "Then we finally got a couple of hits and started hitting the ball hard."

Coming into the contest a decided underdog, the Lady Panthers (4-19) had a golden opportunity for a big inning after back-to-back hit batters opened the game.

With runners at first and third, Chrsitina Hale delivered PikeView's only hit of the game for a 1-0 lead.

Unfortunately for PikeView, the inning quickly short circuited when Madison Whittaker was thrown out going to third and Hale was gunned down trying to move up to second.

A groundball out ended the threat and the Panthers never recovered.

"When you are playing a quality team with a quality pitcher, you just can't make errors," PikeView head coach Steve Compton said. "When they give you something, like the two hit batters, you have to take full advantage of it."

The quick work by Hylton's teammates was a big confidence booster.

"That sequence showed me that I could put my full faith in my team and know that when I am struggling, they will have my back. It let me know I wasn't in it alone," Hylton said.

Wyoming East took the lead and full control of the game in the bottom of the opening frame.

Madison Clark singled and promptly stole second and third. The speedy freshman then forced a pick-off throw from the catcher and raced home, beating the throw back to the plate.

A walk to Andrea Laxton brought Hylton to the plate who ripped a shot into right-center. The diving attempt came up empty allowing Laxton to score easily and Hylton to ramble into third with a triple. After the throw got away at third, Hylton scored for a 3-1 lead.

When Hylton returned to the mound, she was a different pitcher.

"When I came back into the dugout after the first inning, I told myself I had to refocus," Hylton said. "I approached the second inning like it was the beginning of the game."

Over the next four innings, Hylton fanned 13 straight batters. The only base runner coming when a third strike got away and Whittaker reached first base.

"She pitched really well after the first inning," Warner said. "I told she was a little slower than normal and then she really picked it up."

With Hylton reigning fire from the mound, the Lady Warriors began to find the mark at the plate. Seven hits collectively over the third and fourth innings along with five PikeView errors put the game out of reach.

"It was self-inflicted wound after self-inflicted wound for us today," Compton lamented. "I knew coming in it was going to be hard scoring against them. For us to have to have a chance, we had to score a few runs and keep them from scoring. We had chances to get out of those innings, but we just didn't make the plays."

Wyoming East will host county rival Westside today in a winner's bracket clash, while PikeView will travel to Bluefield today in an elimination battle.