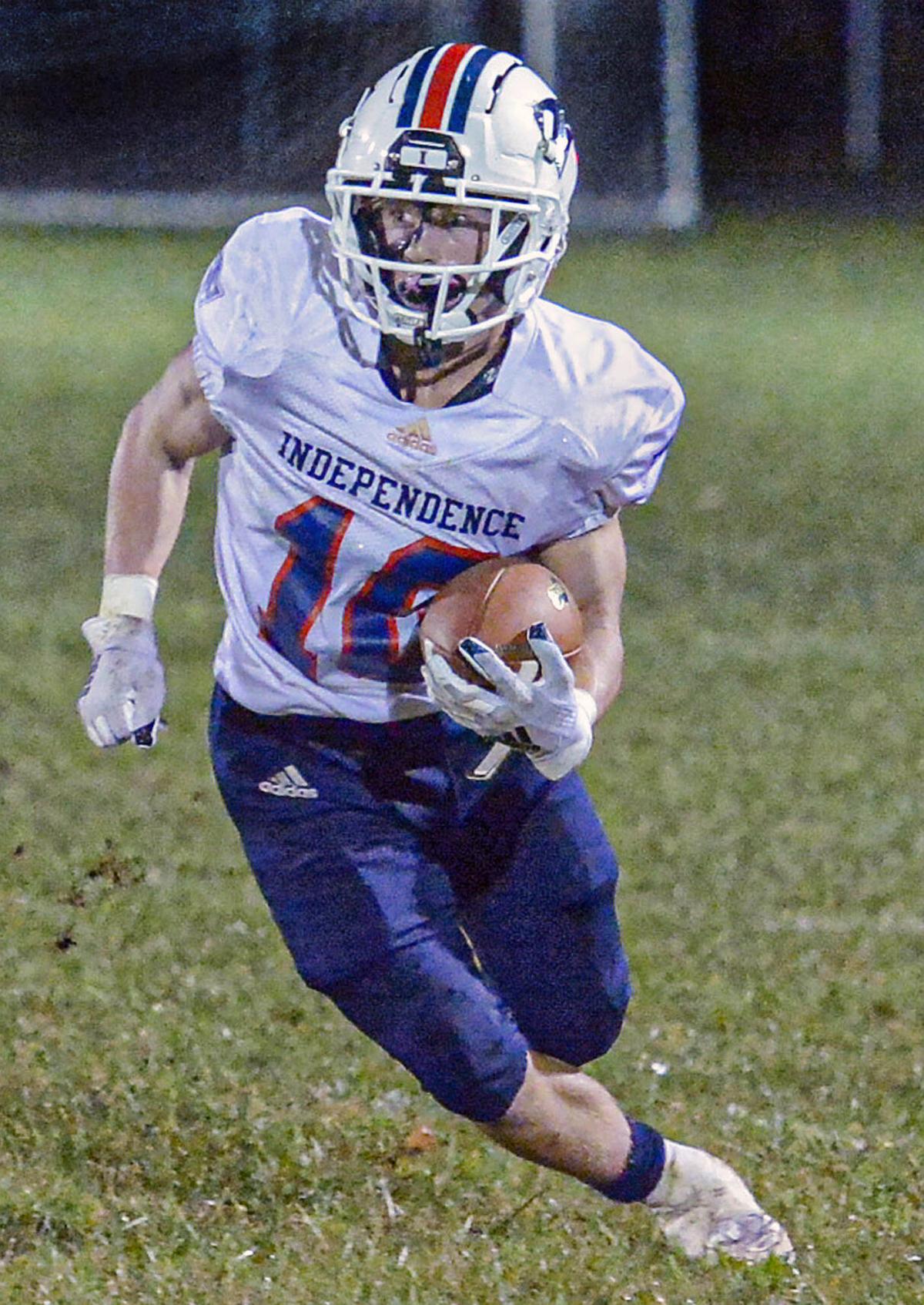 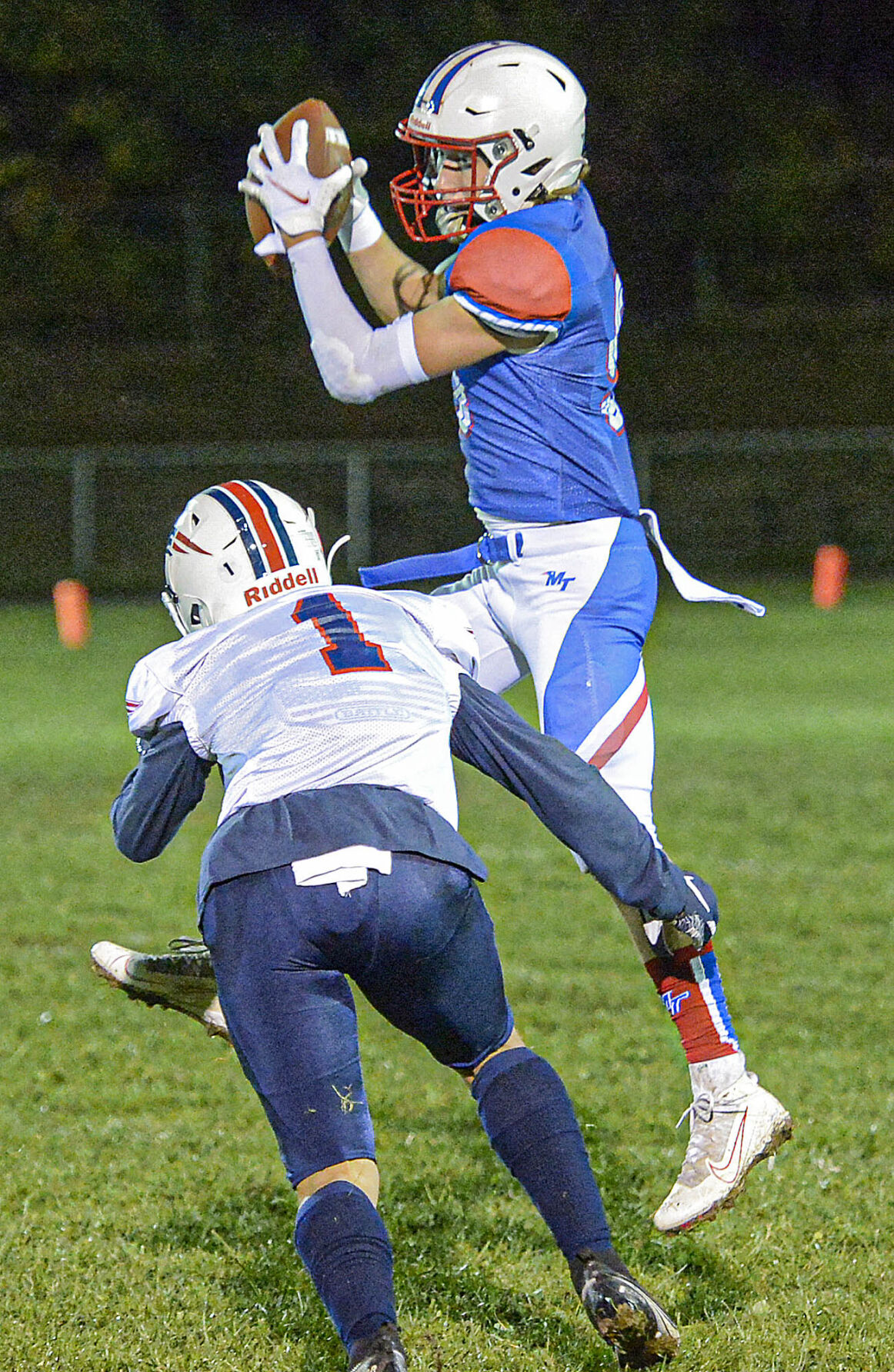 F. Brian Ferguson/Register-Herald=Midland Trail’s Cody Harrell braces for the hit from Independence’s Trey Bowers after pulling down a pass reception on Friday in Hico. 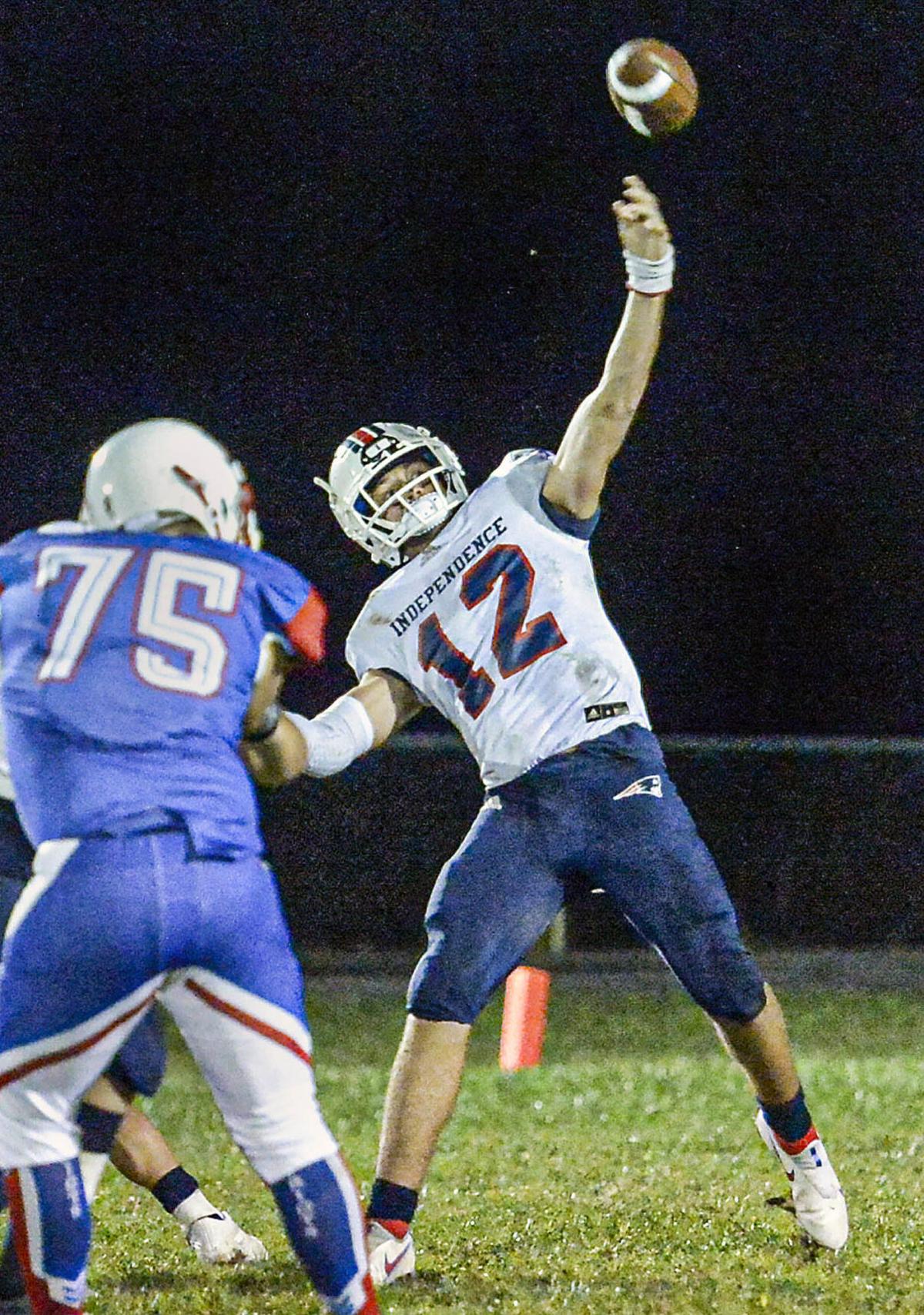 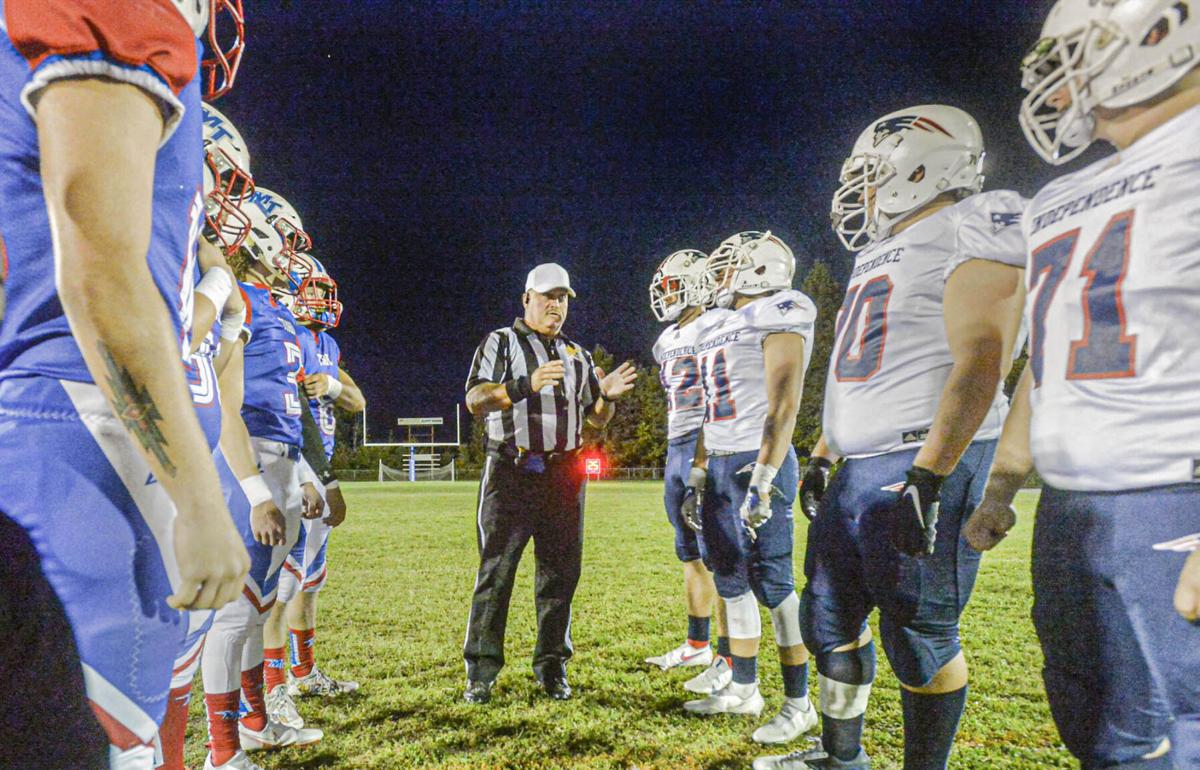 F. Brian Ferguson/Register-Herald=Midland Trail’s Cody Harrell braces for the hit from Independence’s Trey Bowers after pulling down a pass reception on Friday in Hico.

However, the Raleigh County Patriots — minus star running back Atticus Goodson and nine other players — returned to their normally prolific offensive ways in the second and third quarters, piling up 54 points to cruise to a 60-21 conquest of the Patriots from Fayette County in the annual Patriot Bowl.

Independence's lowest point output this season came in a 47-0 defeat of Liberty Raleigh in the season opener.

It marked Independence's first win in the Patriot Bowl series since head coach John H. Lilly assumed the reins in Coal City four years ago. "It's the first time since I've been here," Lilly said.

Independence scored on the first play of the second quarter against Midland Trail on a 17-yard run by Judah Price (16 carries for 245 yards and three scores on the night). Price's score capped a drive that included a pivotal 46-yard pass from Logan Phalin to Trey Bowers, and it opened the floodgates for an offense that would chip in three more TDs in the second period alone — a 62-yard pass from Phalin to Cyrus Goodson that was set up by a Colten Caron interception, a 52-yard Price jaunt and a 20-yard Caron pass from Phalin.

In that time span, Midland Trail could muster just one six-pointer on a 65-yard pass play from Josh Dickerson to Ayden Simms, in which Simms broke clear of two Independence defenders across the middle and hauled in the Dickerson aerial in stride and raced to paydirt.

Independence kept up the pressure after the two teams took the field for the third quarter. The squads traded turnovers, with Trail fumbling the ball over to Independence, then the visitors turning the ball right back over on a Robert Ruffner interception. Indy's Price then logged an interception of his own on the next possession, and that eventually led to a 7-yard scoring hookup from Phalin to Caron. That possession featured a 64-yard, zig-zagging run in the open field by Price.

Price then tacked on a 74-yard TD gallop, and Phalin scored from 1 yard out for a 46-7 lead late in the third frame.

Midland Trail answered with a 45-yard TD pass from Dickerson to Simms — their second scoring hookup of the night — and teammate Cody Harrell sprinted 75 yards to the end zone on a kick return late in the third quarter. Talon Shockey's third PAT kick of the night gave Trail its final points on the evening.

Of his team's foe in the early going, Lilly said, "They did a great job defensively (in the first quarter), and they kind of had us confused there. Once we kind of figured out what they were doing, we started throwing the ball.

"They just loaded the box and sent the house and shut down the run, so we just went to the pass the rest of the game. They did a great job and played hard."

On the evening, Phalin completed 9 of 20 passes for 271 yards, with four of the aerials resulting in TDs. He also crossed the goal line on two runs, including a 52-yard burst with 11:18 remaining in the final period. "We're trying to get better with it (the passing game)," said Lilly. "It's a work in progress."

"They whipped our butts," said Midland Trail head coach Frank Isaacs. "We took it on the chin, but we're going to go over to Independence (next year) and we're gonna whip their hind ends.

"We don't take lightly getting beat here 60-21. I said we would never have a clock run constantly when they put that new rule out, and we did tonight (in the fourth). We take that personally. Next year it will be a personal game, whether it's week 1, week 2 or week whatever. I'll find them on a freaking Sunday or a Saturday and we'll play a game, and we're going to put it to them."

Isaacs embraced the way his team started out against the Class AA Patriots in the opening quarter. "Our guys fought; our guys went out and played the way we can play. Like I said, having two starting linebackers (Aden Isaacs and River Barnhouse) out (hurt the team's chances). They didn't have their starting running back, but having those two guys out means a lot.

"And, on a single-A team, we're missing a starting corner, and we had to move a safety to corner, and, guess what, we don't have a safety on the team, so we had to change our whole defense. Second  quarter, I guess they exploited that a little bit. They realized and they started throwing the ball a little bit. I'm not going to take anything away from them, because they are a really, really good football team with lots of speed. Their three guys ran by our three fastest guys like we were standing still. There isn't a whole lot you can do about that.

"A lot of teams it's not up front, it's the speed difference. And that's what happened tonight."

"Kudos to coach and those kids," Lilly said. "They were short-handed, we were short-handed." Independence had 10 players out, with two quarantined, seven hurt and Goodson in attendance at an out-of-state baseball function. "And they had a bunch of kids out. I thought both teams battled hard. It's hard to play when you've got that many kids out."

Of his 5-0 Patriots, Lilly said, "We've gotta get ready for a tough Man team coming in. We've got our work cut out for us. We'll get Atticus back next week, and hopefully we can keep getting better.

"We knew since June he wasn't going to be here. I guess since we knew we didn't make it a big deal. We love him, he's a great kid. We're not going to go real deep in the playoffs without him. We (experienced) a little bit of adversity in the first quarter, and we hung in there."

"All those skill guys get a lot of love," he added, "but I think it speaks volume for our line.

"Atticus averages 211 (yards), and we put another running back there and he got 226. I think it shows a lot of our offensive line (and) where we're at."

"Last week, Nicholas County beat us physically, and that was disappointing to me," said Isaacs, who absorbed a hard hit during a collision on the sideline Friday and was down briefly. "We come here tonight and we didn't get beat physically.

"Every score they had was because of the skill level, or because we had to adjust because of what we didn't have. We matched them on the physicality level, and that's something I can be proud of. We knew we were coming in with odds stacked against us, and we fought for a quarter and a half. The score should have been 28-21 at halftime. We didn't because we were missing some players."

Independence will host Man next Friday.

Midland Trail (2-3) is slated to visit James Monroe next Friday.

"I'm proud of our kids," said Isaacs. "When you're a little kid and you get your butt whipped, you learn something. And we will learn something from this.

"Our playoffs start next Friday. We've got to win out, we feel, to get in the playoffs, and we've never been in that position before since I've been here. We're looking forward to it and we like the challenge.