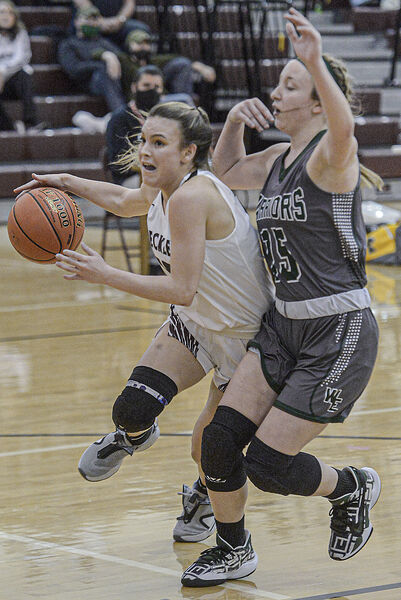 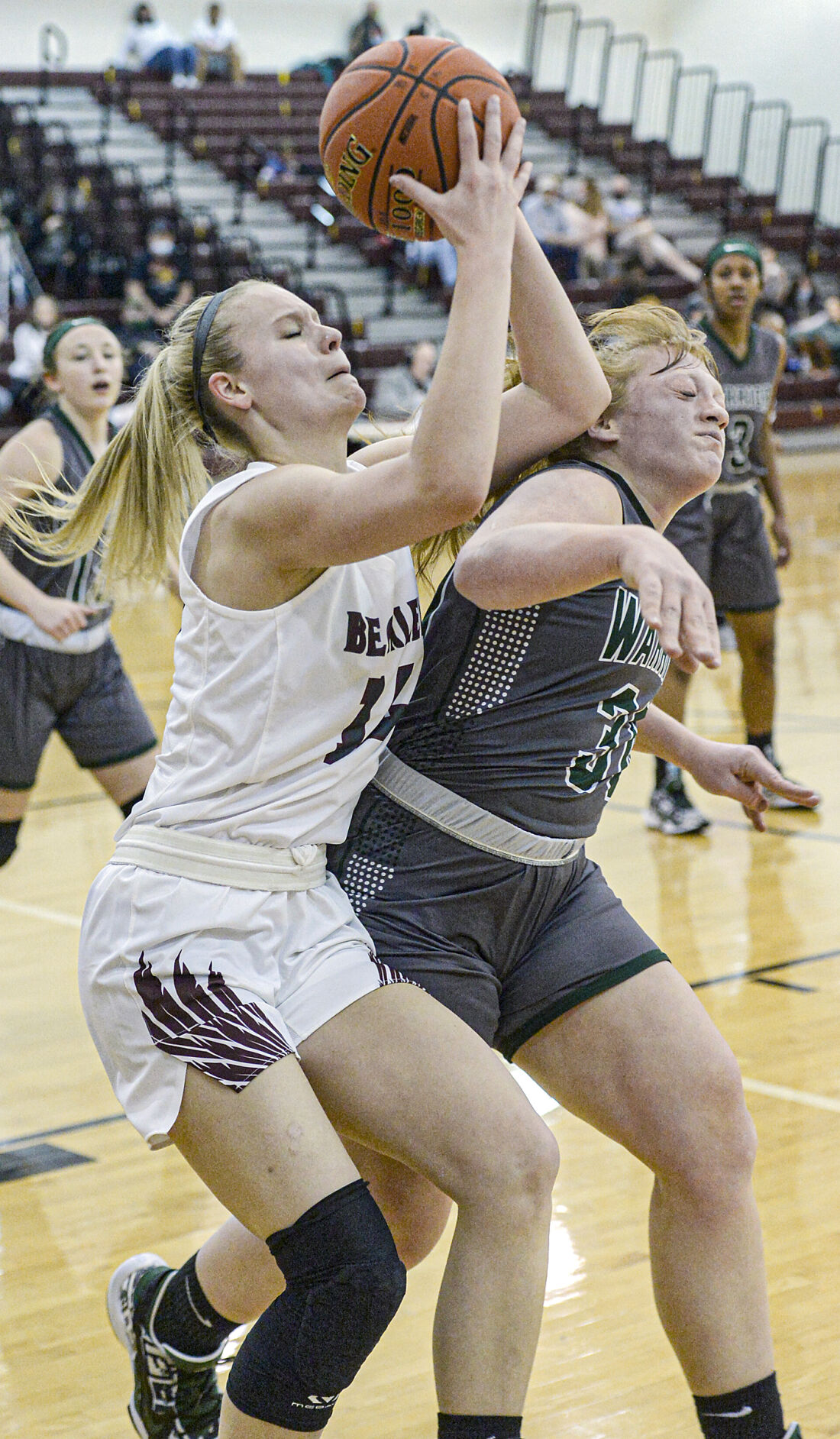 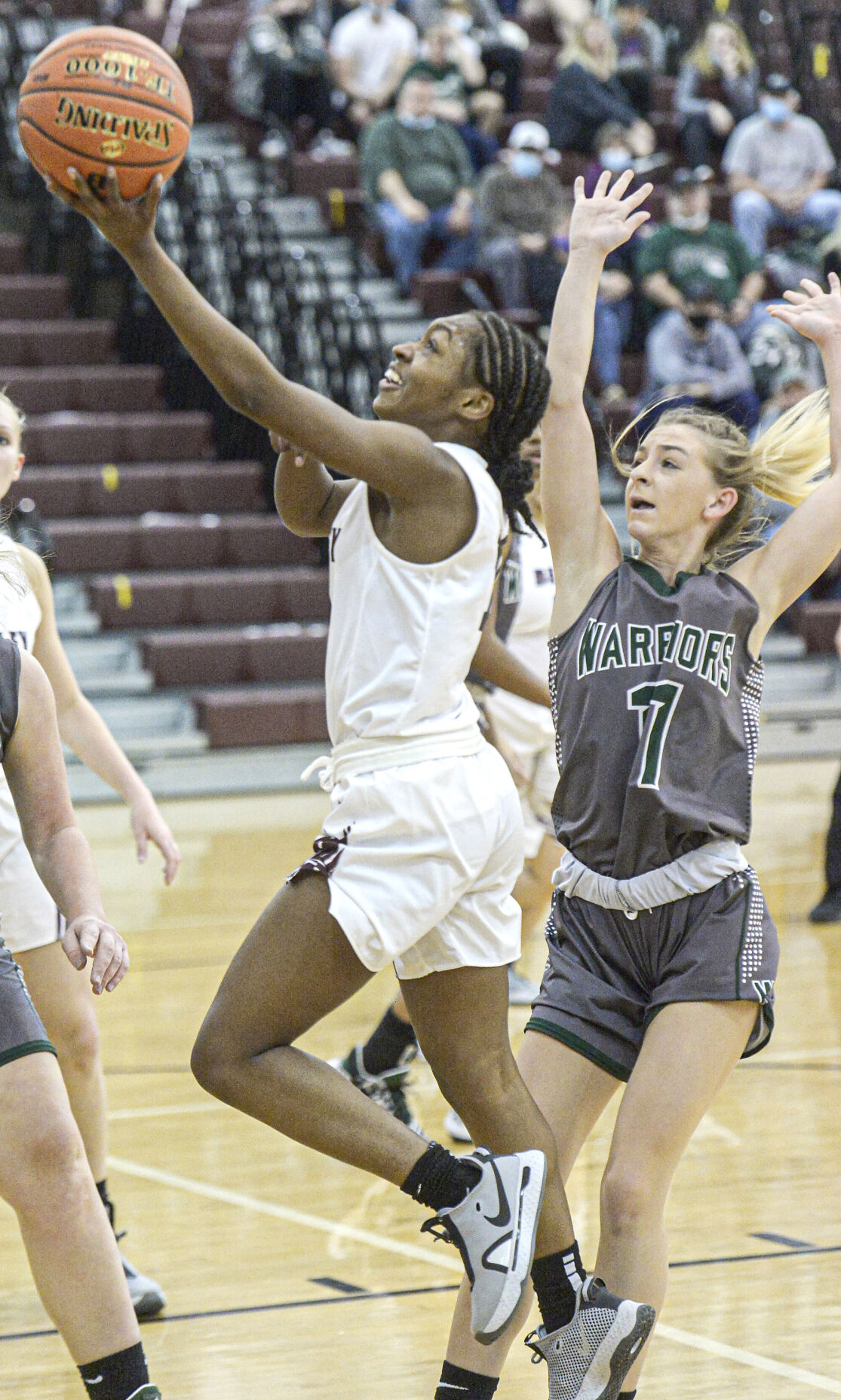 In fact, it's more of an old friend, which is probably why Woodrow Wilson thrives in it.

Trailing by six points with a minute to play and down three starters at that point, Beckley rallied for a 43-41 victory over Class AA No. 2 Wyoming East Saturday in Beckley.

Leading the charge was senior Cloey Frantz, who scored 10 of her game-high 26 points in the final minute to propel the comeback.

"They answered the bell," Nabors said. "They believed. We had a really good practice yesterday and a really good shootaround early this afternoon and they believed they just weren't losing today. That's what they said. We went to the old motto from when I played — 'Refuse to lose' — and that's what they did tonight. We made a lot of mistakes and we didn't play our best game. We were undermanned, but we had girls that stepped up and it was a great team effort and I applaud that."

Despite the rapid flurry of points in the final minutes, there wasn't much offense to go around in the first half. Neither team led by more than three points as the Lady Warriors took a 17-15 advantage into the intermission. Playing a role in the stagnant game was the defense of both teams. The Lady Warriors were held to 6-of-24 shooting in the first half, while Beckley was 6-of-15.

Facing a smaller team, Nabors schemed to his players, throwing out a defense to force the Lady Warriors to play from the perimeter.

"We just looked at personnel and looked at the last game," Nabors said. "We looked at what Skylar (Davidson) was able to do to us — get to the rim. She got to the rim tonight, too, but we just thought we'd switch it up tonight. We call the defense 32 and it's like a matchup zone that looks like man and makes it hard to tell what we're doing. They do a good job of hiding the zone. We've got to get better at it though, because there were times in the second half where we were in the wrong position and they had people cutting down the lane and we didn't have anyone rotating over and they got easy baskets."

As Nabors noted, East was able to find holes and build leads throughout the second half.

The first came when East's Madison Clark scored on a layup, followed by a 3-pointer from Davidson. That helped The Lady Warriors to a five-point lead that dwindled to four at the end of the frame.

Beckley had other plans.

"When we got down they didn't quit," Nabors said. "I still saw the look in their eyes that they wanted to win. There was no panic. Coach Gene (Nabors) called a great timeout that probably won the game, to be honest with you. We hit a shot and we were able to get our heads together and get a game plan to finish out the effort. It was just a great team effort from my coaching staff, coaches Gene and Radar, making sure we had the right people in the game at the right time."

That was when Frantz erupted.

The senior raced down the court and nailed a 3-pointer with 59 seconds left, making it 39-36 and forcing Beckley to foul. That worked out well for the hosts, as East converted on just one attempt and Frantz again took charge, banking in another trey to make it 40-39.

"I knew I had to step up," Frantz said. "They were playing us up and heavy. Our plays weren't really flowing well so I knew our drags and people screening for me would work so that's what I just went for to get open."

Again, free throws plagued East, which converted on just two of six attempts in the final minute and finished 7-of-20 for the game.

"We're not shooting great from the outside either, but we are a good shooting team," East head coach Angie Boninsegna said. "We're getting to the line, we're rushing through a lot and we're not taking our time and we keep doing that over and over again. We've tried to put more emphasis on free throws and layups, but we've just got to go back to doing the fundamental things we're capable of doing. We were very flat. They came out with energy there and we didn't.

"The game just came down to a lack of foul shots on our part. We had a lot of missed opportunities under the basket and we were 7-of-20 from the foul line. That's just what it came down to."

After East made its second and last free throw of the final minute, Frantz was fouled on a drive and was true on both attempts, tying the game at 41.

Having talked over what they wanted to run, East elected not to take a timeout and was fouled on a shot attempt with 14 seconds left, but failed to convert on either of the two attempts. Beckley secured the rebound and called a timeout. Needing to go the length of the court, Frantz did just that, driving coast to coast with the aid of screens and nailing the game-winning layup with three seconds left.

"That was leadership," Nabors said without hesitation. "She leads by example and she's been doing that for the last four years. We told her the ball was going to be in her hands and nobody is toughing it but her unless they trapped her or she didn't have a lane. We put the ball in her hands and told her to get us this win. I thought the girls did an excellent job executing down the stretch. I thought they fouled when they were supposed to, they listened and I've got to give a lot of credit to Bella Staples. She was the one that freed Cloey up for the game-winning shot. She listened, did exactly what we told her to do and set a really good screen for Cloey so she could go downhill, and the rest is history."

Davidson led East with 20 and was the only player to score in double figures for her team.