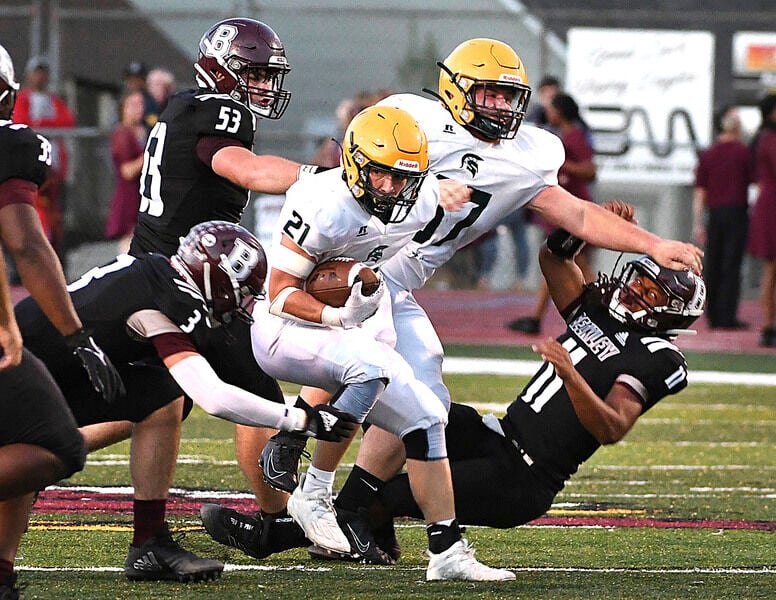 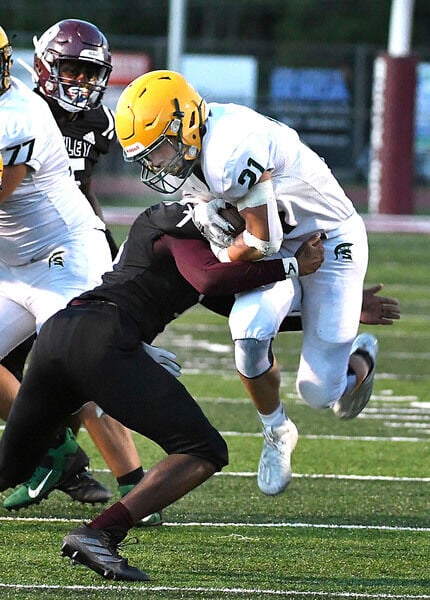 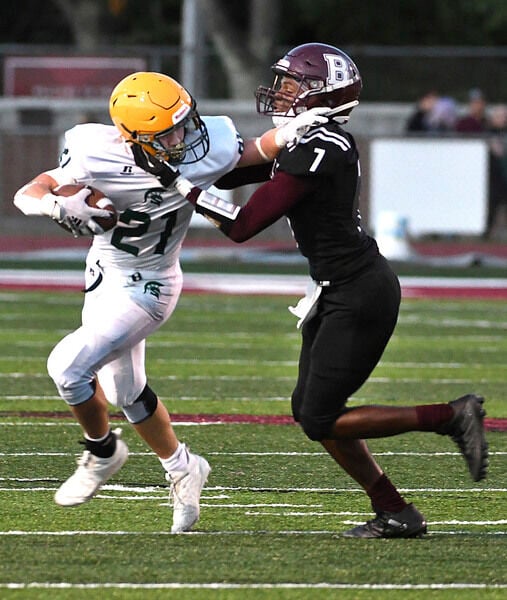 Ian Cline, of Greenbrier East, left, tries to get away from, Tyiai Kimble, of Woodrow Wilson during game at VanMeter Stadium in Beckley Friday night.(Rick Barbero/The Register-Herald) 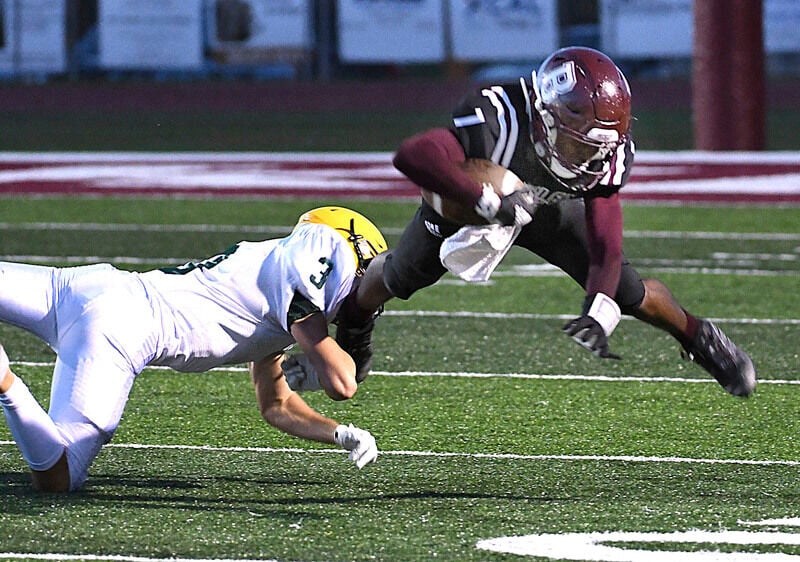 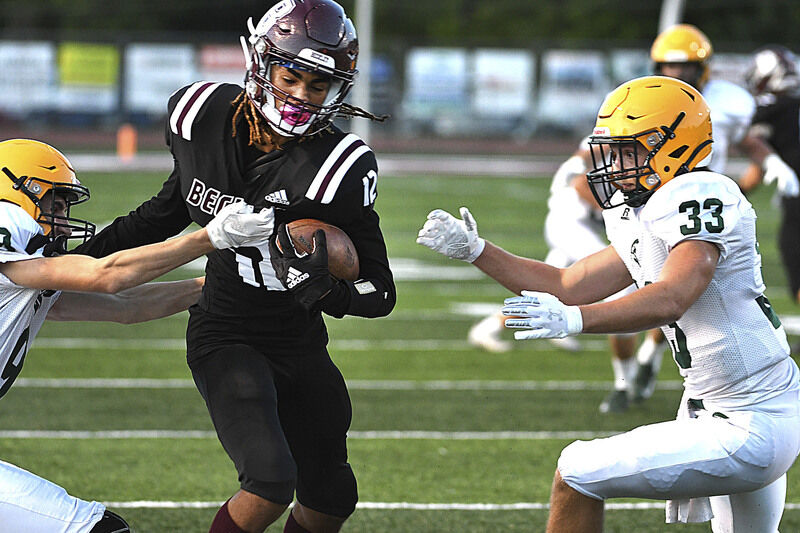 Ian Cline, of Greenbrier East, left, tries to get away from, Tyiai Kimble, of Woodrow Wilson during game at VanMeter Stadium in Beckley Friday night.(Rick Barbero/The Register-Herald)

Greenbrier East sophomore Ian Cline has a ritual to ready himself for games that he swears his well-intentioned teammates try to break.

So far, they haven’t.

After Friday’s 28-14 victory against Woodrow Wilson, they may want to join him.

Cline carried 39 times, which is likely a school record, for 134 yards and a touchdown in the victory. Cline had all but 10 of the Spartans' carries in the game.

Greenbrier East (2-0) scored in each quarter and leaned heavily on that run game late to hold off a Flying Eagles comeback attempt.

At 5-foot-9, 155 pounds, Cline might seem an unlikely candidate for nearly 40 carries. But then there’s that ritual.

“I have a little thing and the boys don’t like it too much, but I usually stop talking about two or three hours before the game and delete social media so I can get my head straight for the game,” Cline said. “They joke around with me and try to get me talking a little bit but I just keep my head right.”

Greenbrier East coach Ray Lee might make it a rule that everyone incorporates the Cline pregame ritual. He didn’t set out to give Cline 39 totes, but he also wasn’t afraid to do it either.

“The thing about Ian is he works his tail off in the offseason,” Lee said. “You can see how it pays off. He is one of the hardest working guys we have in the program. He stays after practice and does extra and it’s because he wants to get better. We can count on him and depend on him like that to never give in and that is the one thing I’m proud of in him.”

It was Cline’s five-yard touchdown with 7:45 remaining that gave the Spartans a 28-14 lead. But more than that, it was his gut-check running in the fourth, as he continued to turn out three-to-six-yard gains to keep the clock running.

“He carried the ball 39 times, controlled the clock on us and kept the offense off the field,” Sarrett said. “Sustained drives. They converted fourth downs on us. We hold them three downs and they convert on fourth down. That’s the ball game. My hat's off to them.”

The Spartans led 14-0 at the half but that changed almost as soon as the bands exited the field.

Lucas McCallister returned the second-half kickoff 90 yards for a touchdown to make it 21-0 and, given the rest of the quarter, it was a key moment.

“I saw a lane open there, my blockers held their blocks,” McCallister said. “I told coach before that if it came to my side, I was going to take it back. I thought that was important to start the second half good and I trusted my blocks out there.”

Greenbrier East scored right off the bat when Bryson Ormsbee took in a screen pass from quarterback Monquelle Davis (5-of-7 passing for 75 yards and two touchdowns) and shed a couple tacklers and raced 42 yards for a touchdown.

In the second quarter, on fourth down at the nine, Davis found Braden Bragg from nine yards out.

“It was a last-minute look,” Davis said. “It was supposed to be a fade route to the outside receiver, it ended up being Bragg wide open in the middle.”

Woodrow had hoped to get a more effective night from its run game, and it did. Sarrett went to the wing-T some in the first half and Matt Moore had a couple of big gainers.

“We’ve got that in our package, we run a little bit of wing-T stuff,” Sarrett said. “When you're down 14, though, the wing-T stuff will only take you so far.”

In the second half, the Woodrow Wilson passing game woke up.

McMillen finished with 184 yards passing, most of that in the second half. He completed 10 straight passes at one point of Woodrow Wilson’s two scoring drives.

He had a big 24-yarder on third down to keep the first drive going and finished it with an 18-yard pass to Elijah Redfern. On the second scoring drive he completed a 61-yarder to Georgetown-bound Keynan Cook and set up his own two-yard sneak.

But it was too much Cline in the second half.

“In middle school I had maybe 10-15 carries so (39) carries is the most I’ve ever had in a game,” Cline said. “I’m going to have to get some recovery the next couple days.”

He has earned it.

For Sarrett, he said the Eagles were a victim of too many mistakes.

It was the first time East has beaten Beckley in three straight games since 1996-98.