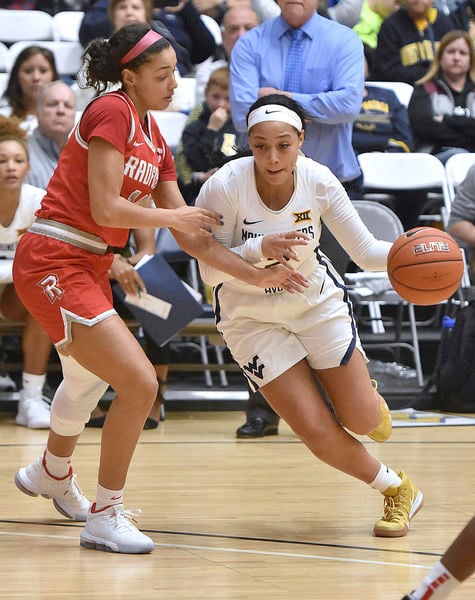 (Brad Davis/The Register-Herald) WVU's Kysre Gondrezick gets around Radford's Makaila Wilson as she starts a drive from the perimeter Sunday afternoon at the Beckley-Raleigh County Convention Center. 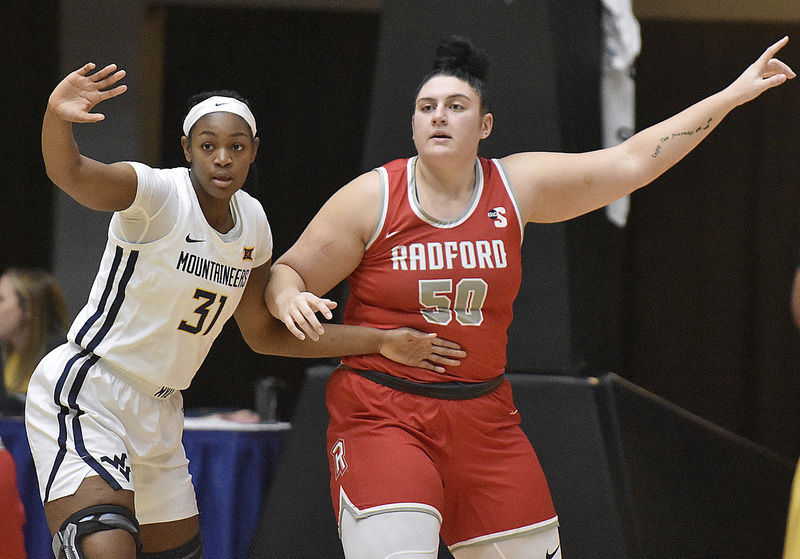 (Brad Davis/The Register-Herald) Former Greenbrier East player Sydney Nunley battles for positioning underneath with WVU's Rochelle Norris as she plays for Radford against the Mountaineers Sunday afternoon at the Beckley-Raleigh County Convention Center.

(Brad Davis/The Register-Herald) WVU's Kysre Gondrezick gets around Radford's Makaila Wilson as she starts a drive from the perimeter Sunday afternoon at the Beckley-Raleigh County Convention Center.

(Brad Davis/The Register-Herald) Former Greenbrier East player Sydney Nunley battles for positioning underneath with WVU's Rochelle Norris as she plays for Radford against the Mountaineers Sunday afternoon at the Beckley-Raleigh County Convention Center.

Tynice Martin made her season debut Sunday against Radford. Leading up to that, the West Virginia senior has had a good vantage point from which to watch Kysre Gondrezick.

She likes what she has seen from the junior Michigan native. So has Lady Mountaineers coach Mike Carey, and Beckley-area fans of the Mountaineers got to witness her in action as well.

Gondrezick scored a game-high 22 points and West Virginia pulled away in the second quarter for a 74-37 win over the Lady Highlanders at the Beckley-Raleigh County Convention Center.

The former Miss Michigan Basketball at Benton Harbor High School matched her season average as WVU improved to 3-0. She was 8-of-13 from the field, including 3-of-5 from 3-point range.

"It's only been three games. I don't want to get too excited," Gondrezick said. "It's a matter of just knowing my role on the team, being able to be a playmaker and to be able to score. ... With Tynice out, I felt like I've had to carry the weight a little bit more. But now that she's back I'm excited to be able to be more unselfish and to have her as a threat."

Gondrezick missed all but the first five games of last season due to personal reasons. She is back this season and thus far has emerged as a team leader in the absence of another star.

Martin missed the Lady Mountaineers' first two games while she was suspended pending the resolution of a domestic battery charge stemming from a July 15 incident. She liked what she saw from Gondrezick during that time.

"It's funny, it's kind of obvious," Martin said. "She's a threat. Of course, last year we missed her. She's proved her point that she can score layups, pullups, 3s, and that's something that we need. It's dangerous having her on one wing and me on the other."

"That's going to be hard to guard," Carey said.

Martin did not start but entered after the first radio timeout at the 7:26 mark of the first quarter. She played 19 minutes and finished with six points on a pair of 3-pointers.

Carey said he entertained the thought of holding the 5-foot-11 guard out one more game because she got banged up during practice last week, but she would not allow it.

"I asked her before (the game), and she said, 'I'm playing.'" Carey said. "I respect her and I respect she will tell me the truth, so I went ahead and played her. She will be the first to tell you her timing was a little off and getting (comfortable) with the other players, but we'll get it."

Martin conceded she was a little tired after the game.

"Of course. I'm not going to lie," Martin said. "It is what it is. As the time goes and as many games as we play, it's going to get better. You can do as much conditioning as you want but you have to get in game shape (by) playing games. Yes, I am a little bit winded but it will get better."

Gondrezick and Martin were quick to credit their teammates, and Carey has stressed the importance team depth will play this season. That came to the fore in Beckley, with all 10 players scoring.

The Highlanders shot just 13-of-48 (27.1 percent) and turned the ball over 21 times. The Mountaineers had nine steals, three by Martinez.

The weekend was a big one for Radford center Sydney Nunley, a 2015 Greenbrier East graduate. She returned to the building where she engaged in many battles with rival Woodrow Wilson.

"It was definitely a reminiscing moment," the senior said. "We had gotten here a little bit early, so I was able to just kind of sit there and take it in for a minute, because I do remember whenever I was there for the Big Atlantic Classic and the Beckley versus Greenbrier East games. It's always fun and just a good time."

Nunley was battling a cold but still finished just shy of a double-double with 12 points and nine rebounds. She scored Radford's first eight points.

"I felt like I did what I was supposed to do," she said. "I tried to lead my team. We've still got to figure some stuff out with our team camaraderie and what we are supposed to do, and the roles for each other. We'll figure it out, but it showed up tonight. It's just something that we've got to figure out."

After the game, Carey thanked the Beckley fans for their support.

"I think in five years this is my first time playing here, so just having fans out. having people screaming, it was great," Martin said.