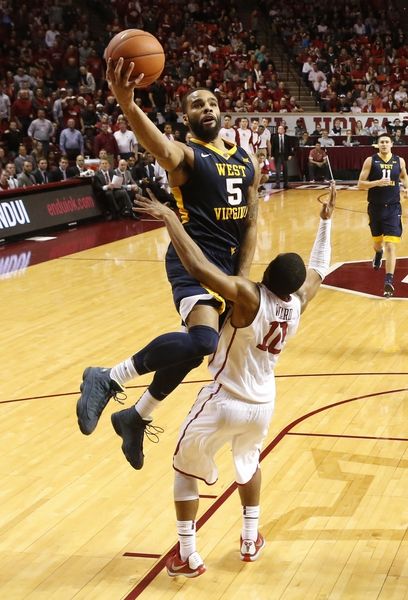 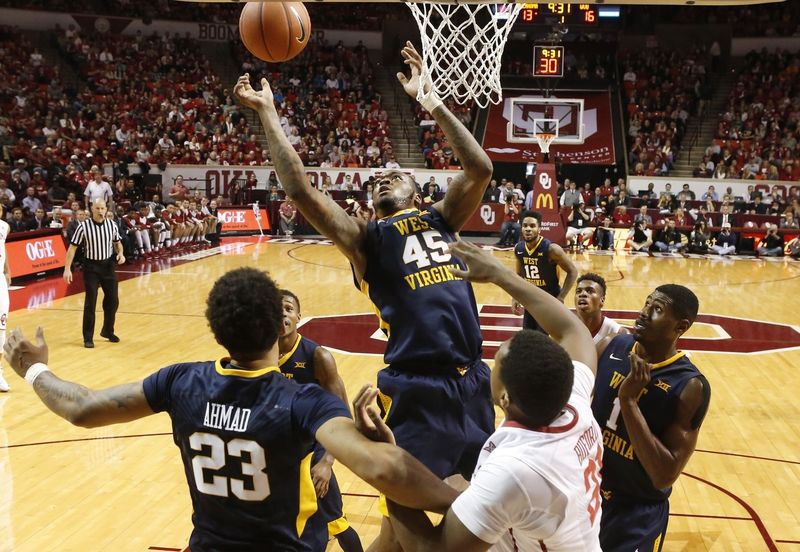 West Virginia forward Elijah Macon (45) reaches for a rebound in the first half of an NCAA college basketball game against Oklahoma in Norman, Okla., Saturday, Jan. 16, 2016. (AP Photo/Sue Ogrocki)

West Virginia forward Elijah Macon (45) reaches for a rebound in the first half of an NCAA college basketball game against Oklahoma in Norman, Okla., Saturday, Jan. 16, 2016. (AP Photo/Sue Ogrocki)

Focus, motivation and intensity weren’t a problem for the West Virginia basketball team last week. When the schedule includes the No. 1 and No. 2 teams in the country, most everybody is going to come to the gym ready to play.

That was certainly the case for the Mountaineers, who beat No. 1 Kansas and took No. 2 Oklahoma to the wire in Norman, Okla., before falling short on a last-second put-back for the Sooners.

The split against the country’s top two teams moved WVU (15-2, 4-1 Big 12) to No. 6 in the country, but head coach Bob Huggins believes this is where the real challenge begins. In a Big 12 conference that includes five ranked teams and at least four legitimate contenders for the league title, it’s important to play with that same energy every time out.

The Longhorns aren’t considered one of the Big 12’s top teams under new head coach Shaka Smart, but their resume does include wins over No. 3 North Carolina and No. 17 Iowa State, the same Cyclone team that knocked off the top-ranked Sooners Monday night.

“It’s not a team you can sleep on,” said WVU junior forward Devin Williams, who leads the team with 14.1 points and 8.6 rebounds per game but played just 15 minutes in the 70-68 loss to OU on Saturday because of foul trouble. “We have to come out with a lot of intensity and get headed back in the right direction.”

The Longhorns have been a tough matchup for the Mountaineers since joining the Big 12. WVU beat them twice in 2013 but then lost four straight before a 71-64 victory last year in Morgantown finally ended that skid.

Texas’ size and length have been a problem for previous WVU teams, but this group of Longhorns is a little different.

Center Cameron Ridley is out of the lineup after breaking his foot. Six-foot-10 senior Prince Ibeh has taken his place and is a big-time shot blocker, though his offense his limited Senior Connor Lammert (6-9) brings additional size, but he’s not as skilled as Ridley.

Even without the injuries, Texas has been a little different under Smart, who took VCU to five NCAA Tournaments and a Final Four in six seasons before heading to Texas.

Smart is known for his “havoc” style of basketball that includes some press and a great deal of up-tempo offense. He’s implemented some of that already at UT and is slowly adding more.

“It’s a change in philosophy and a change in the way they play,” said WVU head coach Bob Huggins. “So it’s going to take them a little bit of time. And the injuries have hurt him. But he’s done a great job. They’re playing pretty well right now.

“They’re very talented, when you can beat Carolina and some of the people they’ve beaten (you’re talented).”

Isiah Taylor is the point guard, and he’s averaging 17.2 points and 4.8 assists per game, both team highs.

“I like everything about him,” said Huggins. “I think he understands when people are coming open and gets the ball to them. He’s the best guy in our league at pushing the ball, and he’s got the best mid-range game in the league. He’s just really good. I think he’s the best point guard in our league.”

Javan Felix, a senior, is one of the other guards, averaging 10.8 points and 1.9 assists per game. Including a 19-point effort in Morgantown last year.

“They’re a good, athletic team with good guards,” said WVU senior guard Jaysean Paige, who’s averaging 13.7 points and 3.8 rebounds off the bench for the Mountaineers. “They’ve been together and are experienced.”

The abilities of those guard, Paige believes, could give the Longhorns an advantage against WVU’s “Press Virginia” defense, which is averaging 11.4 steals per game.

“It makes them a little more dangerous,” said Paige. “They have more playmakers out there and play more up-tempo.”

WVU enters today’s game tied with Kansas and Baylor for the Big 12 lead, and it knows if it wants to be a true contender, home games against teams in the middle of the pack are games it has to win.

“It’s a blessing to be where we are, but we’re not satisfied. We feel like we could have won the Virginia game and the Oklahoma game, so we’re going to keep working and try to get better.