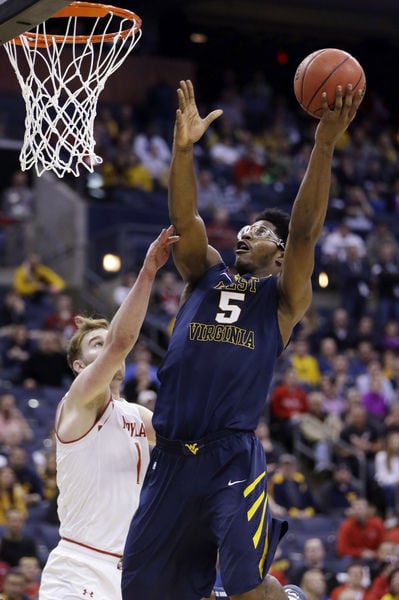 AP PhotoWest Virginia's Devin Williams (5) shoots against Maryland's Evan Smotrycz during the second half of an NCAA men's tournament college basketball game in the Round of 32 in Columbus, Ohio, Sunday, March 22, 2015. Williams led West Virginia with 16 points in a 69-59 win. (AP Photo/Tony Dejak) 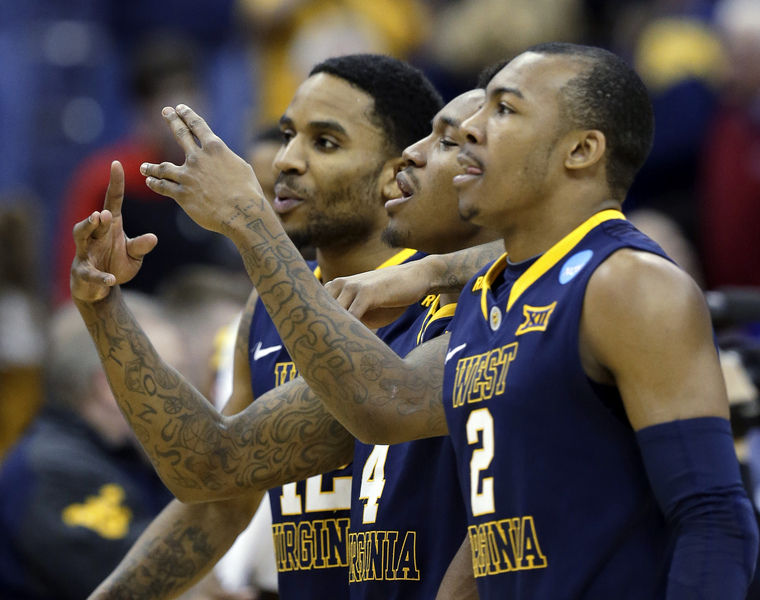 AP PhotoWest Virginia’s Tarik Phillip, Daxter Miles Jr. (4) and Jevon Carter (2) celebrate after a 69-59 win over Maryland in an NCAA Tournament Round of 32 game Sunday in Columbus, Ohio. West Virginia advanced to the Sweet 16 and play top seed Kentucky Thursday in Cleveland.

AP PhotoWest Virginia's Devin Williams (5) shoots against Maryland's Evan Smotrycz during the second half of an NCAA men's tournament college basketball game in the Round of 32 in Columbus, Ohio, Sunday, March 22, 2015. Williams led West Virginia with 16 points in a 69-59 win. (AP Photo/Tony Dejak)

AP PhotoWest Virginia’s Tarik Phillip, Daxter Miles Jr. (4) and Jevon Carter (2) celebrate after a 69-59 win over Maryland in an NCAA Tournament Round of 32 game Sunday in Columbus, Ohio. West Virginia advanced to the Sweet 16 and play top seed Kentucky Thursday in Cleveland.

Oklahoma overcame Dayton's home-state advantage and moved on to a regional that seems truly up for grabs. West Virginia also had a successful stay in Ohio State's hometown, but there is no doubt about the favorite where the Mountaineers are headed.

The Sooners and Mountaineers were the only Big 12 teams out of seven that made the field of 68 to get out of the first weekend.

Buddy Hield, Jordan Woodard and Oklahoma eliminated 11th-seeded Dayton 72-66 on Sunday to advance to the East Regional in Syracuse, New York, where the No. 3 Sooners will be the highest-seeded team.

Oklahoma meets seventh-seeded Michigan State on Friday. The Spartans eliminated No. 2 Virginia earlier Sunday, while top-seeded Villanova was knocked out by North Carolina State on Saturday.

Sooners coach Lon Kruger, who joined Eddie Sutton as the only coaches to take four teams to the round of 16, said there is no reason to think the bracket has opened up for the Oklahoma.

"When you get to the Sweet 16, everyone deserves to be there. They've gotten there for a reason," he said. "Obviously, Michigan State is a terrific program and (coach) Tom (Izzo) does a great job and they've got that NCAA success culture. And our guys respect that. They know that the seeds really don't mean anything."

Hield scored 15 points, including a layup after Woodard's steal to make it 57-56 with 5:56 left. Oklahoma never trailed again, slowly growing its lead from the line. Woodard had 16 points, including seven free throws in the final minute.

Oklahoma held Dayton scoreless for 9:04 and without a basket for 10:32 in the second half.

With the Sooners up four, Hield stuffed Darrell Davis as he went up for a fast-break layup after a turnover by Woodard. Hield said the turnover was his fault.

"I either had to foul them, don't let them get a shot up, but I made a good hustle play," the Big 12 player of the year said.

Dayton was trying to become the first team to reach the regionals as an 11 seed in consecutive seasons.

Injuries, suspensions and academic issues forced the Flyers (27-9) to play with seven scholarship players most of the season, but they managed to reach the NCAA Tournament and win two games, starting with the First Four at home.

"We just had a couple of plays not go our way," coach Archie Miller said. "And give them credit for making them. But it won't take away from the season. I'll remember this season for as long as I live, regardless of how long I coach."

Gary Browne scored 14 points and Daxter Miles Jr. had 12 as the fifth-seeded Mountaineers (25-9) advanced to the second weekend of the tournament for the first time since 2010, when they went all the way to the Final Four.

Next up: A showdown with top-ranked Kentucky in the Sweet 16. The Mountaineers will take on the undefeated Wildcats (36-0) on Thursday night in the Midwest Regional semifinals in Cleveland.

"I'm pretty sure nobody in the world thinks we're going to get past Kentucky besides the 1.2 million that's in West Virginia," guard Juwan Staten said.

Williams said about Kentucky: "It's another team. They put their drawers on the same way we do."

Terrapins coach Mark Turgeon said Trimble was cleared by doctors the first time he was hit in the head, but not the second. Playing without their star freshman point guard against the Mountaineers' pressure was too much for Maryland to overcome.

"We have one point guard in our program, and a really good one in Melo," Turgeon said. "And it's the first time all year really that he couldn't play. He took a beating tonight. So would the outcome have been different? But obviously we weren't the same without him out there. We were just trying to figure it out."

The 23 turnovers was a season high for the Terps.

Maryland was trying to advance to the round of 16 for the first time since 2003 — a year after the Terps won the national championship under coach Gary Williams.