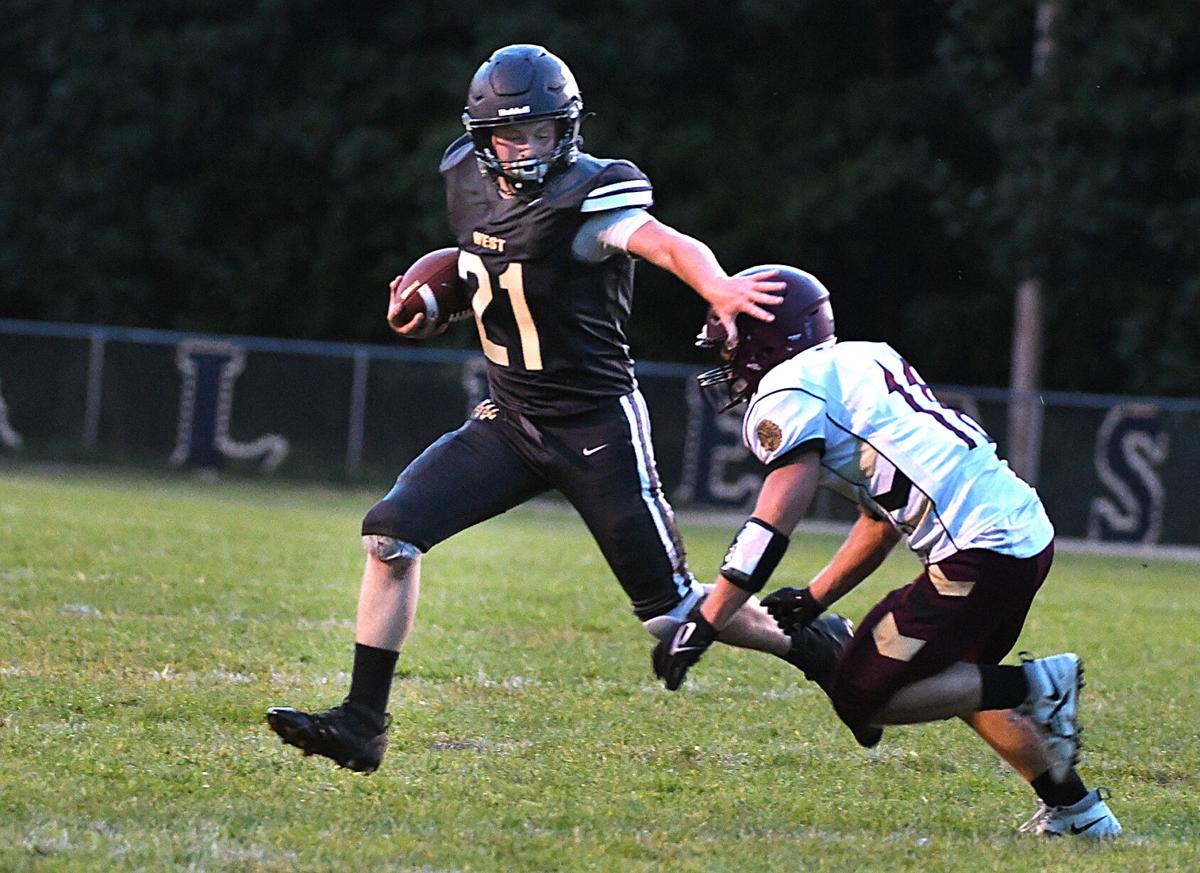 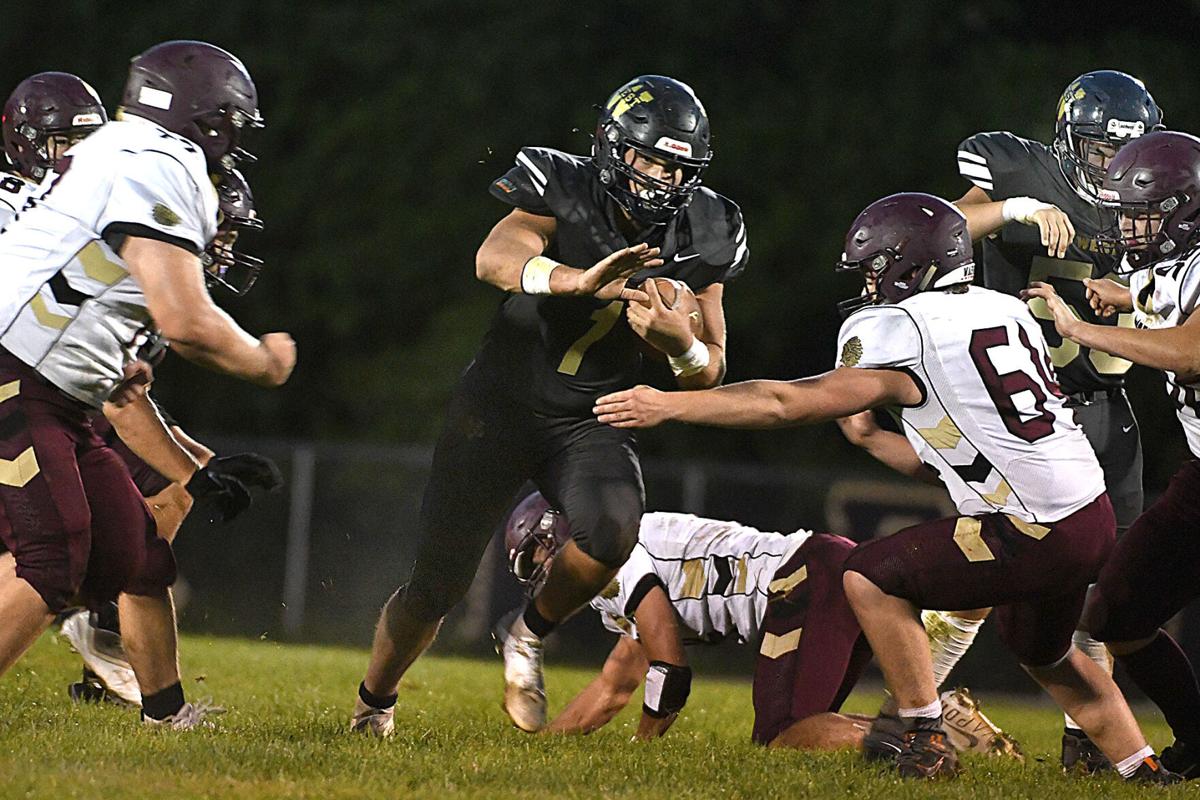 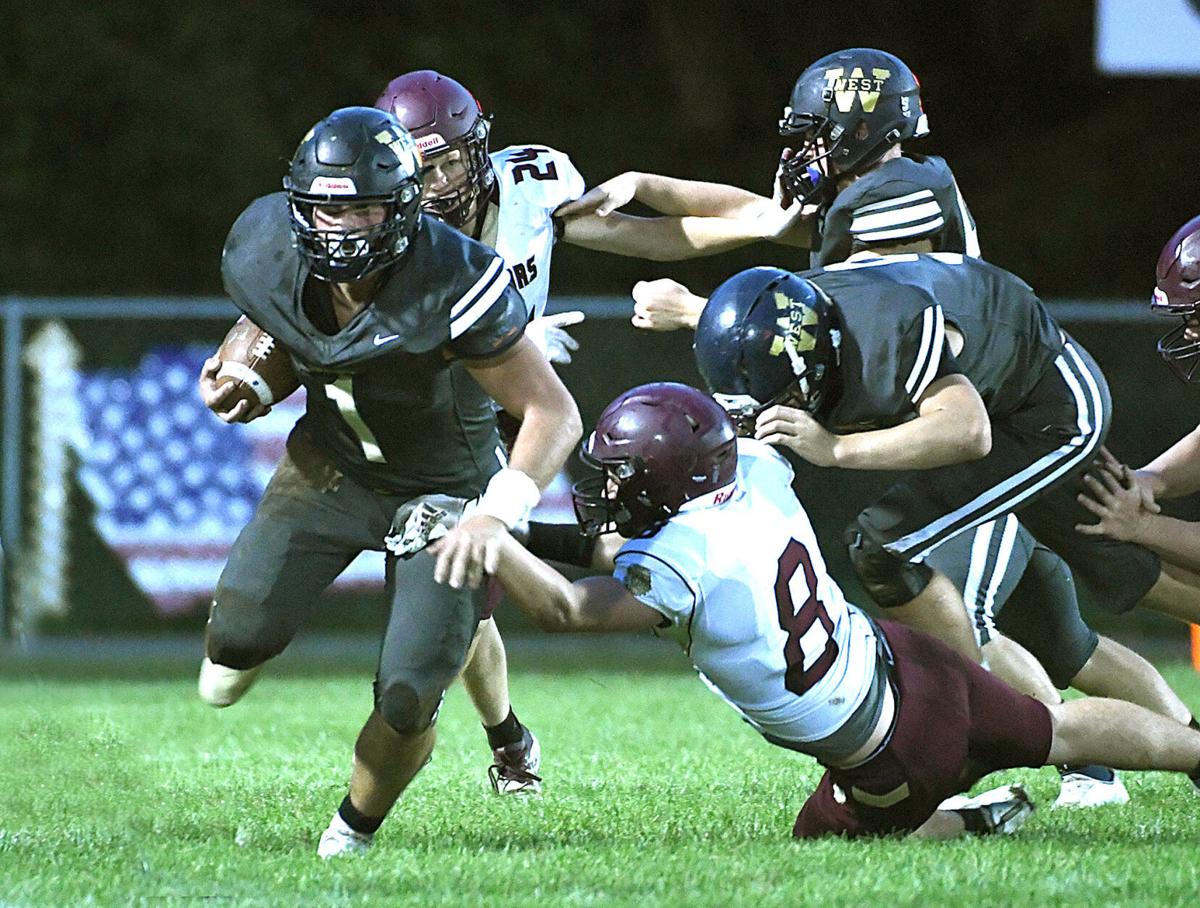 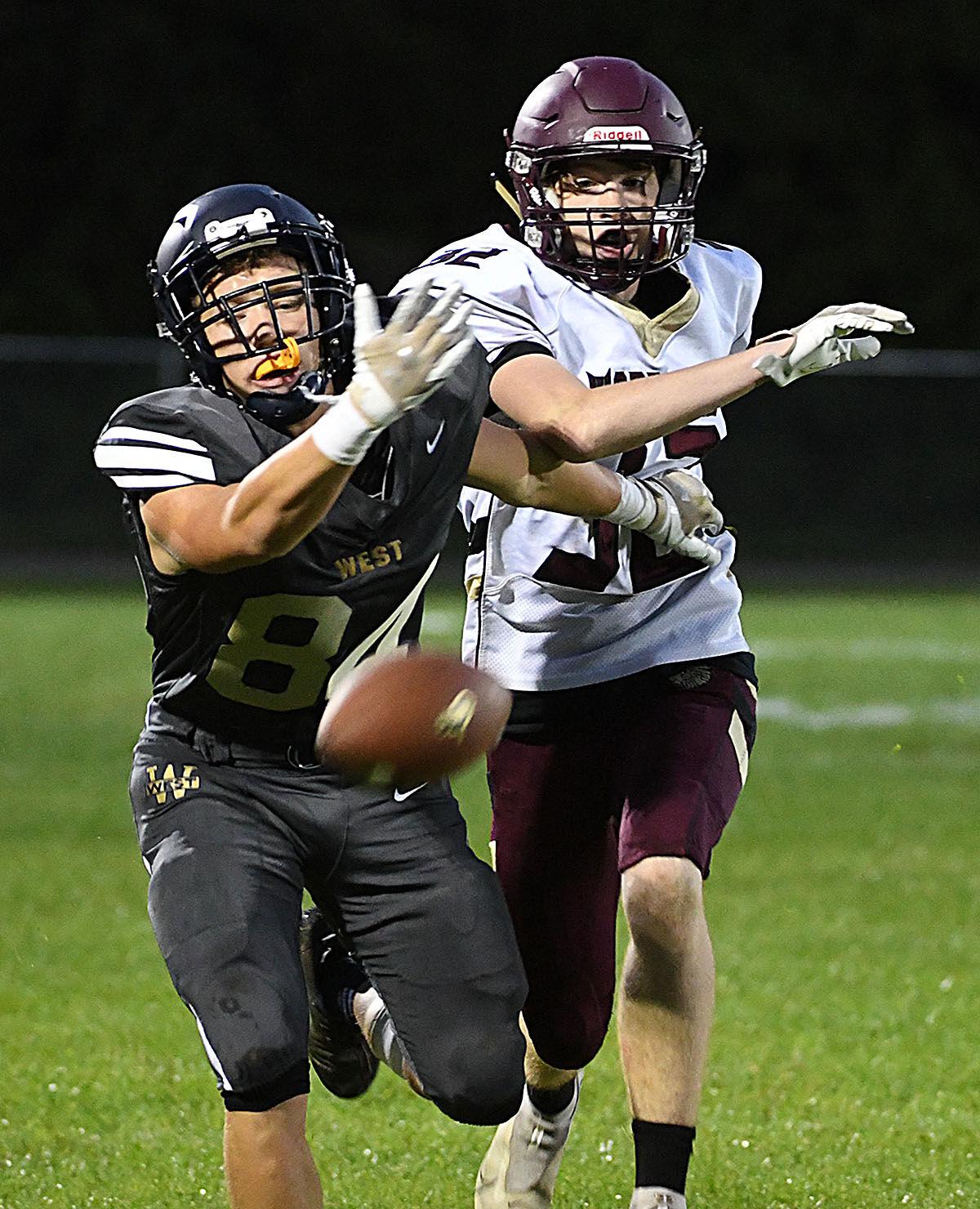 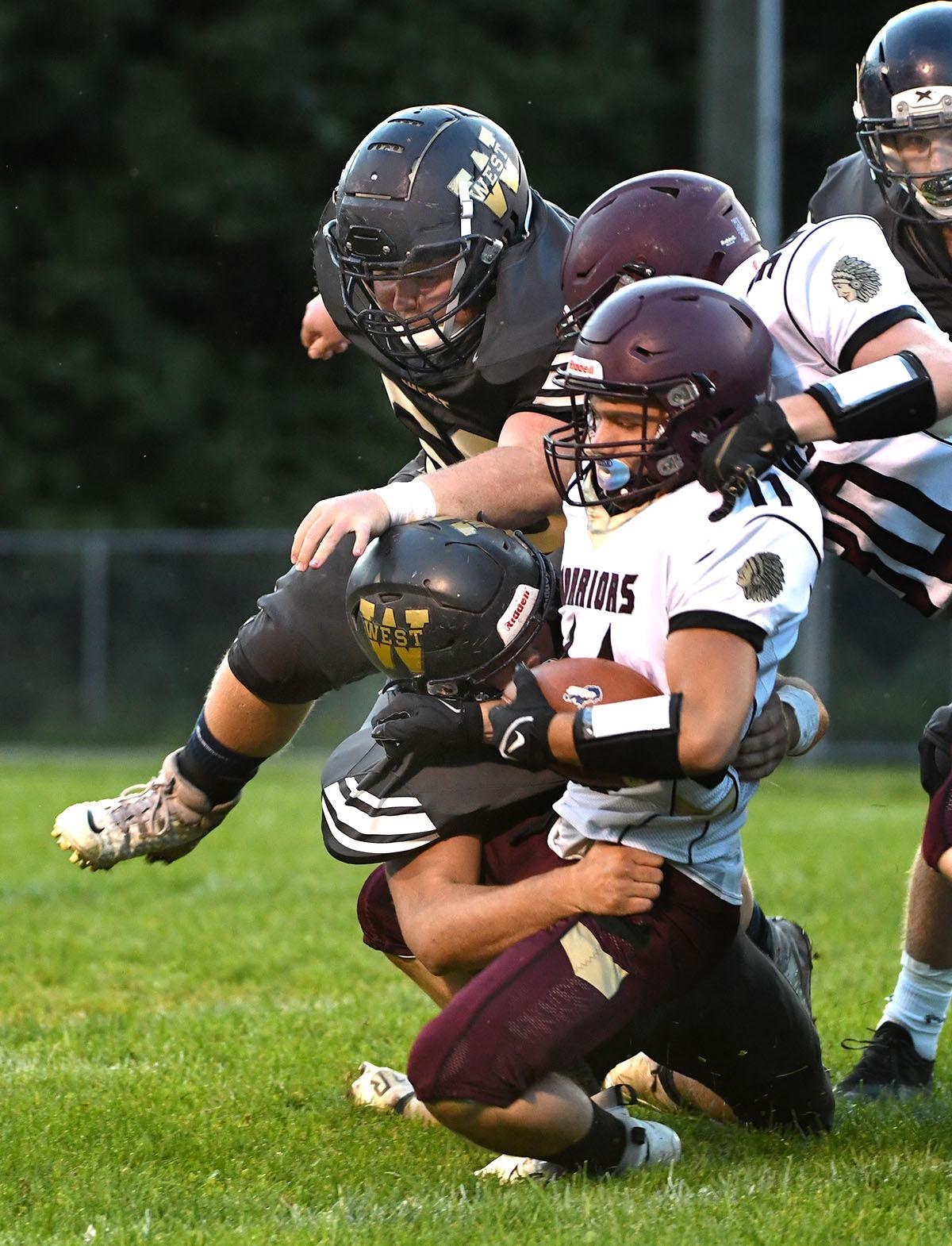 CHARMCO – Perhaps there is no better place than Greenbrier West for former WVU fullback Owen Schmitt to begin his coaching career.

The one-time 235-pound fullback was famed for his 57-yard touchdown run in the 2007 Fiesta Bowl, when he was dubbed the Runaway Beer Truck as he was sprinting toward the end zone.

At Greenbrier West he sees a lot of himself on the field, hard runners who are as apt to initiate contact as take it.

The Cavaliers ran for 239 yards and three touchdowns and dominated Pocahontas County defensively in posting a 32-0 shutout Friday night.

Ty Nickell led the way with 129 yards, running with a purpose in the Greenbrier West home opener.

Nobody embodies the running style of Schmitt more than Nickell. In fact, he has been likened to a smaller version of Schmitt.

In fact, he has been self-proclaimed the miniature runaway beer truck.

“We were just joking around in practice one day and I just said it,” Nickell said. “It just kind of fell into place and all my teammates came with it and stuck with it. I’ve kind of got that mentality of Owen. He was a great football player and that’s what I want to be.”

“Owen has been good for us,” head coach Toby Harris said. “He comes down to practice and these guys know he’s been there; they know he’s done it. I think he’s a good example for our kids to see and understand that you have to be tough, put your head down and run the football.”

It wasn’t so much runaway run plays that keyed the Cavaliers Friday, only seven of their 49 carries going for 10 yards or more.

Quarterback Cole Vandall had a hand in three scores, scoring twice on a touchdown run and an interception.

There was a key stretch where the Cavaliers nearly doubled their lead late in the second quarter and Vandall had a hand in both. Two touchdowns in a three-play span gave the Cavaliers a 26-0 lead at the half.

Vandall, who has thrown a touchdown in all three of the Cavaliers' games this season and was tabbed to replace all-stater Kaiden Pack, did it again, finding a wide-open Roy Loudermilk for a score.

Vandall then intercepted a Braeden Hayhurst pass and returned it 46 yards for a touchdown.

“I’d say my interception (will be the highlight from the win),” Vandall said. “It was my first high school pick-6 and after the adrenaline was really flowing.”

Vandall threw for 73 yards and ran for 69 in the victory.

“That was really important, we needed that momentum at that time,” Harris said. “That interception put us on a roll.”

Robinson scored two touchdowns on a pair of two-yard runs for the Cavaliers.

“We have some kids who can run the football,” Harris said. “And we had a couple who were out tonight.”

Kadin Parker suffered a fractured jaw in the opener at Buffalo but likely will return in the regular season.

As efficient as the offense was, the defense was dominating.

The Cavaliers held the Warriors to 75 yards rushing, a lot of that in the fourth quarter, and 154 yards overall.

The Warriors had 11 plays of zero or negative yardage.

First-year player Chase McClung moved to safety for the first time Friday night, and he had an interception.

“We have a lot of guys who are aggressive, they just want to play,” said McClung, a member of the Cavaliers' state tournament basketball team. “They don’t care what the play is, they just want to go hit someone and that helps a lot. I think this defense is solid. Give us a couple more games and we’re going to be pretty good.”

The Cavaliers made a little history Friday, wearing gray uniforms that arrived at the school Friday afternoon.

The school also had a moving pregame show dedicated to veterans, the 9/11 victims, first responders and 13 military members who were killed in Afghanistan last month, as 13 members of the football team came onto the field with 13 flags.