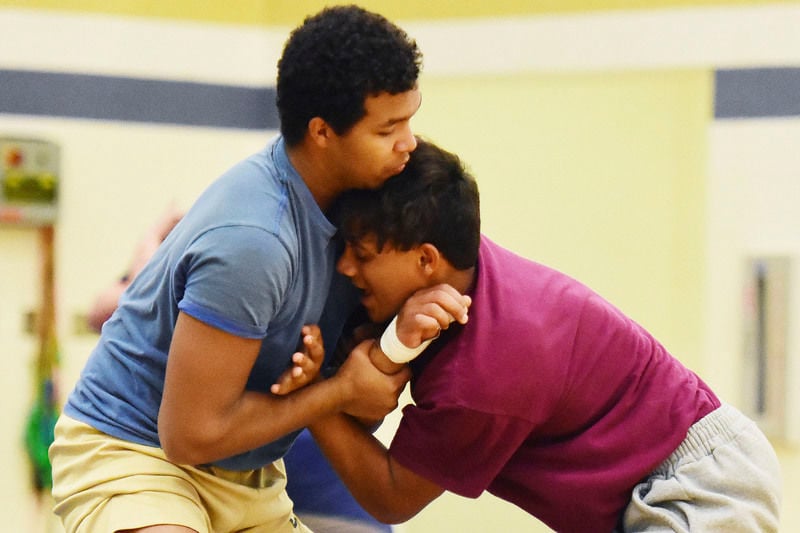 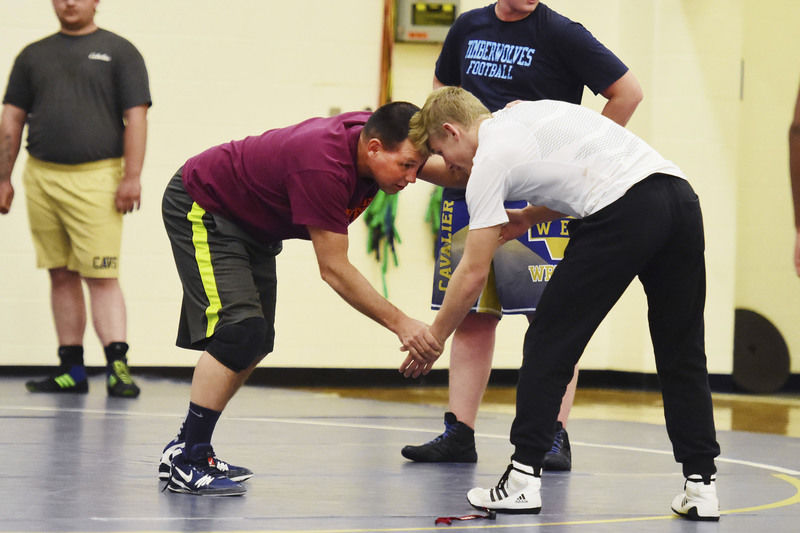 Greenbrier West wrestling coach Jeremy Tincher demonstrates a move with Brad Blevins during their practice at the school in Charmco on Tuesday. (Chris Jackson/The Register-Herald)

Greenbrier West wrestling coach Jeremy Tincher demonstrates a move with Brad Blevins during their practice at the school in Charmco on Tuesday. (Chris Jackson/The Register-Herald)

The month of February ended with Greenbrier West winning its second wrestling state championship. The next day, coach Jeremy Tincher breathed a big sigh of relief.

"I have probably never been so glad for a state tournament to be over as I was last year," Tincher said.

It's not that he didn't enjoy leaving Huntington with another trophy. The road to getting there was just about as rocky as it could get for a state champion.

From start to finish, from the mat room to the gyms and arenas, injuries wreaked havoc on the Cavaliers. Tincher has always believed in his wrestlers, but even he could feel doubt creeping in.

"We dealt with so much," Tincher said. "Even in regionals I wondered if we would even qualify some kids that I knew would be state place winners if they could get there, because they were hurt."

The story finished with the exact ending everyone expected. The Cavaliers validated their season-long stay as the state's top-ranked team with the Class A state title. The trophy now sits with the Class AA title West won in 2013 — still as a Class A school.

It was a fitting end to a season that presented one challenge after another.

"I said this a hundred times, we had more of a CrossFit team than a wrestling team," said Tincher, who also took home his second Coach of the Year award. "We never really got to practice wrestling because we could only do this drill with this kid, and this kid could only go on the bottom. Our conditioning had to be modified to accommodate all the different injuries we had.

"I think it speaks volumes about this group of kids and their resiliency and determination to get there and win a state championship."

West qualified nine for the state tournament and five wound up placing. Of the nine, five will be returning. Dan Nutter (132 pounds), Colten Dorsey (170) and Colton Kessler (182) all graduated.

The fourth who won't be back is an unexpected and big loss for the Cavaliers.

Chase Patterson was set to be back for his senior year, but offseason knee surgery makes that appear unlikely. Patterson was a two-time state finalist, including last year's runner-up finish to Independence's Mason Kump at 195 pounds.

"It doesn't look like he will be back," Tincher said. "It's hard to replace a Chase Patterson. In my opinion he was one of the top five wrestlers at any weight class in the state of West Virginia. But we have other kids who are capable of winning matches and winning state championships for us."

Sophomore Colby Winnings is also back, and sophomore Eli White, senior Justin Wilhelm and sophomore Brad Blevins, a transfer from Greenbrier East, have had a good preseason thus far.

"We've got some kids who can make some noise." Tincher said. "I still think we have the best team, on paper. But just like Karl Warden (the father of former Independence head coach Cliff Warden) said, the paper will let you write whatever you want."

The schedule will have the Cavaliers prepared for another shot at a memorable last weekend. They begin Dec. 14 at Roane County before heading to Class AAA Cabell Midland the next weekend. That is followed by the annual Lindsey Raines Memorial Duals in Charmco.

There is also the West Virginia National Guard Duals in Summersville, the WSAZ Invitational in Huntington, a dual at Woodrow Wilson and the Class A Challenge at Ritchie County.

All of that before the Coalfield Conference Invitational and the Region 3 and state tournaments.

"I think the hardest thing to do in sports is to repeat, at any level," Tincher said. "The NFL, the NBA, MLB, NHL, college football, college basketball. How many of those guys do you see repeat? For us to do that is going to take commitment. Do you want two rings, or are you satisfied with one?

"My message this year is, we didn't have any (individual) state champions last year. We have several kids who are very capable of being state champions. If the kids want to be state champions, then the team thing will take care of itself."