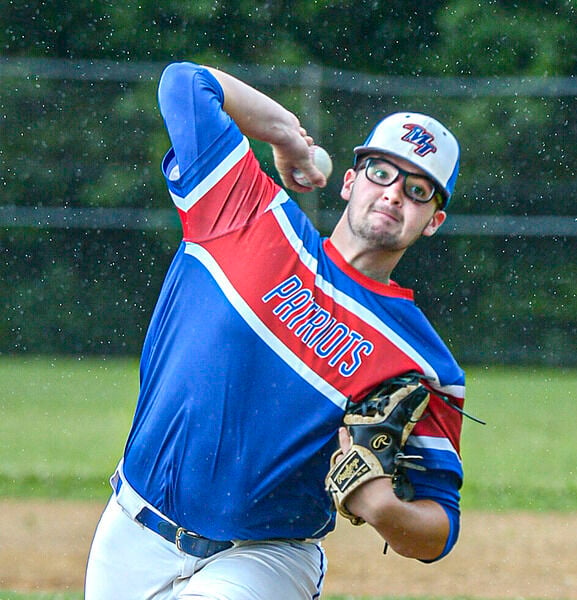 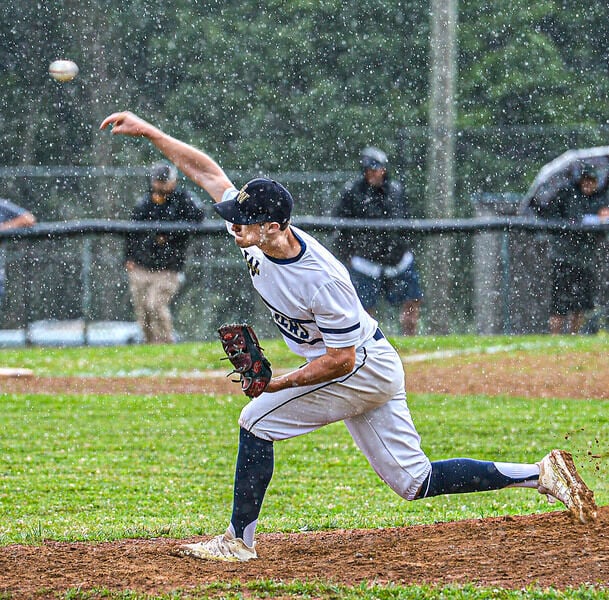 F. Brian Ferguson/For TheRegister-HeraldGreenbrier West pitcher Evan McDade delievers in the rain to a Midland Trail batter during their Class A Region 3, Section 2 elimination game Monday in Hico. The game was suspended due to rain in the bottom of the third inning. It will resume today at 1 p.m.

F. Brian Ferguson/For TheRegister-HeraldGreenbrier West pitcher Evan McDade delievers in the rain to a Midland Trail batter during their Class A Region 3, Section 2 elimination game Monday in Hico. The game was suspended due to rain in the bottom of the third inning. It will resume today at 1 p.m.

HICO — Midland Trail and Greenbrier West were vying for a spot in the Class A Region 3, Section 2 baseball championship game against Charleston Catholic.

Mother Nature had other ideas.

A steady rain throughout and eventual lightning forced the elimination game showdown to be stopped in the bottom of the third inning with Trail leading 3-2.

The game is scheduled to resume today at 1 p.m. with Cade Kincaid at the plate, Griffin Boggs on first base and no outs for the Patriots.

No. 2 hitter Chase McClung got the scoring started for West. After smacking a one-out double, McClung came in to score on a blistering shot from Matt Mills that could not be handled in the infield off the wet grass.

Trail made its noise in the second inning with an RBI-single from Indy Eades before Larry Bigham followed with a single of his own to drive in two more for the 3-1 lead.

Ty Nickell worked a bases loaded walk to cut the deficit in half in the top of the third, but West could not capitalize further on the bases loaded situation.

Midland Trail starter Bo Persinger short-circuited the Cavaliers’ threat with a strikeout for the final out of the inning.

Due to pitch count rules, neither starting pitcher — Evan McDade for West ,or Persinger — will be available to pitch today.

It iss the second time in the tournament that Trail has had a game stopped and forced to be finished the next day. Trailing 6-4 to Charleston Catholic in the bottom of the sixth last Thursday, the Patriots wound up on the short end of a 12-5 decision Friday.

“It was frustrating last week, but everything is an experience. I don’t think we will be as frustrated,” Midland Trail head coach John Mark Kincaid said. “The other day we were in the game and they were up to bat. We were hoping to get them out and have a chance to win the game. It is kinda flipped now with us up to bat, but both teams will have to change pitchers.”

The Class A Region 3, Section 2 softball tournament was also held up. Greenbrier West and Richwood were in a scoreless tie in the bottom of the second when rain forced its suspension.

They will resume today at 3 p.m. in Richwood. The winner will advance to the championship game Wednesday at 5:30 p.m. at Midland Trail.