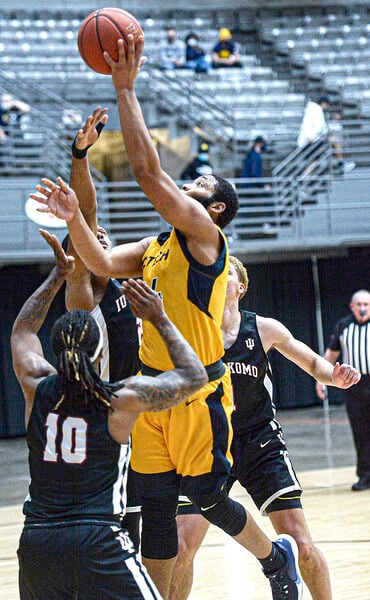 F. Brian Ferguson/For The Register-HeraldWVU Tech’s Tamon Scruggs weaves his way through the Kokomo defense for the score during their River States Conference Tournament semifinal game Wednesday at the Beckley-Raleigh County Convention Center. 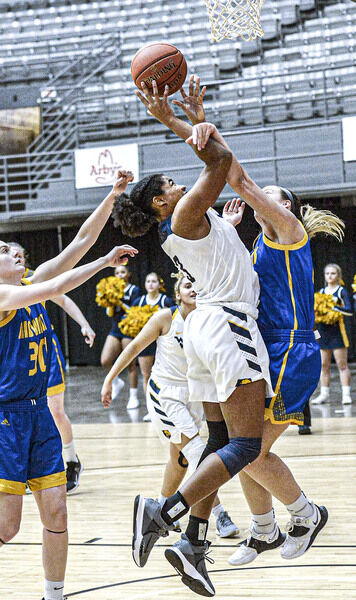 F. Brian Ferguson/For The Register-HeraldWVU Tech’s Tamon Scruggs weaves his way through the Kokomo defense for the score during their River States Conference Tournament semifinal game Wednesday at the Beckley-Raleigh County Convention Center.

The objective is simple now: Win, and you’re in.

Not that WVU Tech has lost its focus on winning another conference championship.

Both the men’s and women’s basketball teams have advanced to the River States Conference Tournament semifinals. And thanks to a change necessitated by the coronavirus pandemic, both teams will be playing for another trip to the NAIA national tournament.

All four semifinal winners in the men’s and women’s brackets will receive automatic national bids. Normally, the regular season champions would have already had their spots clinched, but with each team having a varying number of games canceled due to the virus, regular season standings were scrapped for this season.

So that’s what’s at stake for the Golden Bears, who will play their semifinal games on Saturday. And they will both have to do it on the road.

The men will play at Alice Lloyd for a 2 p.m. tip-off. The women will return to Asbury and will start at 3 p.m.

The winners will advance to Tuesday's conference championship games. Even with the promise of an NAIA trip before they even get to Tuesday, Tech still wants to take the league hardware.

Second-year coach James Long’s team avenged that loss on Wednesday with a 79-66 win over the Cougars in the second round. The Golden Bears (10-6) outscored the Cougars 15-3 in the first 5 1/2 minutes of the second half to take a 50-34 lead and eventually led by 21 before holding them off the rest of the way.

Senior guard Noah Young is the Eagles’ leading scorer at 14.1 points per game and also tops in assists at 4.7. Junior guard Will Philpot (8.8 ppg) is one of the league’s top rebounders and is pulling down 8.9 boards. Another guard, Chandler Stewart, is good for 13.9 points and 1.5 steals.

Tech and Alice Lloyd did not meet in the regular season.

The Tech women, meanwhile, face a rematch at Asbury, which took the Golden Bears to overtime on Jan. 21 before Tech prevailed 97-92. That game was also played on the road.

The Golden Bears (10-8) opened the tournament with a 96-48 first-round win at Carlow, then defeated Midway 77-68 in Wednesday’s quarterfinals. Tech was down by two after the third quarter but shot 54 percent in the final period while holding Midway to under 32 percent.

Tech was also 8-of-13 from the free throw line in the fourth quarter after attempting just three foul shots through the first three periods.

Asbury (14-5) eliminated Oakland City 82-72 in the quarterfinals. The Eagles are the nation’s top 3-point shooting team, averaging 14.8 per game, and are sixth in scoring at 87.1 points per game.