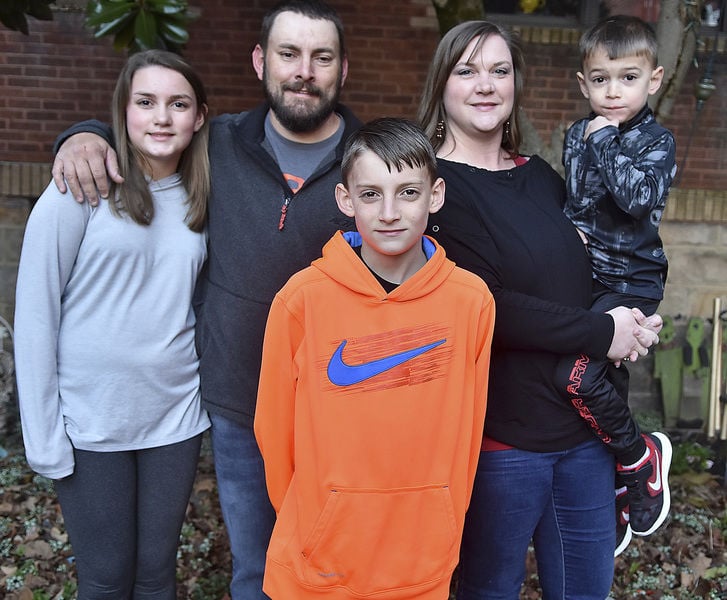 (Brad Davis/The Register-Herald) Nine-year-old Gunnar Tabor and his family pose for a quick photo during a Register-Herald visit with the Shady Spring residents at KSI Sports inside the School of Harmony Friday afternoon. With him are his big sister Addison, 12, little brother Sawyer, 4, mother Caryn and father Josh. 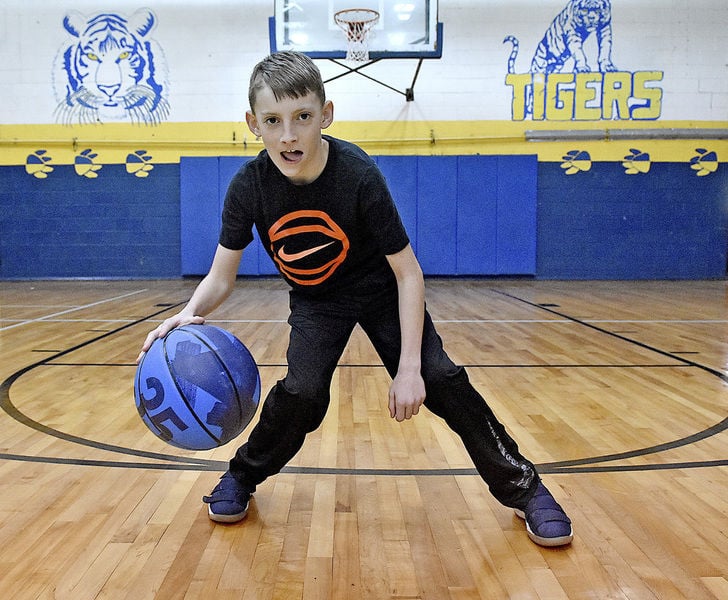 (Brad Davis/The Register-Herald) Nine-year-old Shady Spring resident Gunnar Tabor shows off his basketball kills during a Register-Herald visit with him and his family at KSI Sports inside the School of Harmony Friday afternoon.

(Brad Davis/The Register-Herald) Nine-year-old Gunnar Tabor and his family pose for a quick photo during a Register-Herald visit with the Shady Spring residents at KSI Sports inside the School of Harmony Friday afternoon. With him are his big sister Addison, 12, little brother Sawyer, 4, mother Caryn and father Josh.

(Brad Davis/The Register-Herald) Nine-year-old Shady Spring resident Gunnar Tabor shows off his basketball kills during a Register-Herald visit with him and his family at KSI Sports inside the School of Harmony Friday afternoon.

With some of the strictest immunization policies in the nation for children entering the public school system, West Virginia leads the nation for school-age vaccination rates.

Only the Mountain State, California and Mississippi do not allow religious or personal belief exemptions for children in public schools.

All 50 states and the District of Columbia do, however, allow medical exemptions. But some parents in West Virginia believe these exemptions are too difficult to obtain.

The child’s parent or guardian may file a written request for a review of the decision to the state health officer, Dr. Rahul Gupta.

Gupta, who is also commissioner of the West Virginia Bureau for Public Health, said a child diagnosed with cancer or another immunity-compromising condition could qualify for an exemption.

He said that's all the more reason why healthy children need to get vaccinated, to create "herd immunity" and prevent the spread of disease to those with weaker immune systems.

"My responsibly is to make sure people can make the best decision for themselves with good information, sound science and sound data," Gupta said.

West Virginians for Health Freedom, as described on wvforhealthfreedom.com, is a group of state residents fighting to establish legislative policies that recognize parental choice for vaccinations. The director of the organization, Chanda Adkins, was recently appointed by Gov. Jim Justice to the House of Delegates District 31.

Adkins told The Register-Herald she was unsure whether she would pursue legislation regarding vaccines, but at least two pieces of legislation were introduced before her appointment, Senate Bill 330 and House Bill 2945, which would allow for "conscientious" or "personal" objections to vaccinations. Both bills remain in committee.

Caryn Tabor, a Shady Spring resident and a Raleigh County teacher, supports this legislation. She said it isn't about being an anti-vaxxer. It's about choice.

"As a new mom and as new parents, we did everything we were told to do, exactly when we were told to do it," she said. "We never second guessed anybody. We never had any reason to doubt the medical community and those recommendations."

But her second child, Gunnar, had an adverse reaction after receiving a flu vaccine at age 1.

"He got a pretty high fever. I was in college at the time and I had to take off a few days from classes with him, but he had no lasting effects."

As someone who's adamant about getting her flu shot each year, Tabor listened to recommendations from the Centers for Disease Control and Prevention (CDC), as well as her pediatrician — young children and the elderly population are the most vulnerable.

The vaccine is not a requirement for children to be enrolled in the public school system, but it is strongly encouraged. To enroll in public school in West Virginia, state law requires diphtheria, pertussis, tetanus, polio, measles, mumps, rubella, varicella and hepatitis B unless properly medically exempted.

The next year, when Gunnar was 2, he was old enough for the flu mist rather than the shot, so he received that form of the vaccine.

"The next day, he woke up with a limp in his right leg. His right leg turned in toward his left leg. He had to walk on the tip of his big toe. His right leg wouldn't straighten. It sort of buckled in."

Gunnar was an active little boy, so Tabor thought perhaps he had pulled a muscle. She didn't take him to the doctor immediately, but after his condition didn't improve after a few days, she took him to his pediatrician.

X-rays showed nothing abnormal. No further testing was completed.

She tried to discuss with her pediatrician the possible correlation between the vaccine and Gunnar's sudden leg issues, but the doctor dismissed her concerns as a mere coincidence. The pediatrician said no research has shown this kind of reaction.

"It did eventually go away on its own," Tabor said. "But to me, it wasn't a coincidence."

When Gunnar was 3, Tabor decided to try once more with the flu shot, since his only reaction at age 1 had been a fever, which is a common side effect.

"After that shot, we were back in the pediatrician's office the next day with stuttering. It wasn't an occasional word. It was every word," Tabor said. "He would break down and cry because he couldn't communicate with us anymore."

The pediatrician assured her stuttering is a common speech delay at age 3.

Through the CDC's Vaccine Adverse Event Reporting System (VAERS), The Register-Herald searched for similar cases. Searching for "speech disorders" and "influenza vaccinations" for ages 1 to 5, VAERS yielded 40 similar events to what Gunnar experienced.

VAERS receives roughly 30,000 reports annually, and the CDC notes that anyone can file a report, and a report does not necessarily mean the vaccine caused the problem listed. To conduct a search, visit wonder.cdc.gov/vaers.html.

Moving forward, Tabor wanted to be especially cautious with Gunnar's other required vaccinations before he entered school. Instead of getting multiple shots at once, she wanted them one at a time, to better monitor his health as they were administered.

He was fully vaccinated by age 5, when he entered the public school system. But as he's approaching booster requirements for seventh grade, Tabor is growing fearful once more.

"My view is not an anti-vax view. My view is a pro-choice view. I want a choice when it comes to seventh grade with Gunnar."

Gunnar doesn’t remember not being able to walk or stuttering, but with upcoming vaccinations and booster shots, if he has an adverse reaction, he'll remember.

She said she would love to apply for a medical exemption for Gunnar, but she does not have the support of her pediatrician.

"Not too many doctors will support those," Tabor said. "They're incredibly difficult to get."

Nearly a dozen local residents reached out to The Register-Herald, sharing their stories of vaccine injury and a desire for more choice. Some said they plan to homeschool their children to avoid vaccination requirements, or move outside West Virginia to apply for a religious or personal beliefs exemption.

"We understand why people are hesitant," Gupta said. "But we want to work with families who are hesitant."

In many instances, he said parents do not want their child to receive multiple shots at once.

"Our health officer can work with them to spread shots out over a period of time. Most people are OK once they find out the facts of the matter."

He said there is a lot of inaccurate information circulating about vaccines, and he wants to see people rely on data rather than fear mongering.

Before 2015, California allowed personal belief exemptions. But after a 2014 measles outbreak at Disneyland, where 159 people were infected, lawmakers passed Senate Bill 277, eliminating all exemptions except for medical purposes. The Los Angeles Times reported an analysis found the outbreak was exacerbated by low vaccination rates.

Vaccines are some of the most studied drugs in the world's history, Gupta said, and they are found to be safe and effective in reducing diseases.

"We want to make sure West Virginians are protected, that families and communities are protected, and that children aren't victimized by any particular philosophy just because of misunderstanding."

As a doctor who trained outside the U.S., Gupta said he's seen first hand the devastation these diseases can cause.

"I have seen children die in my arms because of diphtheria. I've seen kids I've had to manage who would never walk straight again due to polio."

The World Health Organization (WHO) says on its site, "There is arguably no single preventive health intervention more cost-effective than immunization." The WHO reports immunization currently prevents 2 million to 3 million deaths every year.

As a parent himself, Gupta said he understands the concerns.

"It's the utmost responsibility a person has, being a parent to a child. But as a health care provider, I have to make sure people have the best tools in the toolbox to make the best decisions for their child. Vaccines are not 100 percent effective, and sometimes a child is not the best candidate for vaccines, which is why we have medical exemptions."

Of the 60 medical exemption requests received in 2017, Gupta said only two were denied.

He said at the end of the day, everyone wants the same thing — what's best for the child.

"It's not about a philosophy. It's about the best way to protect your child."

Elizabeth Jean Hurt of Columbus, OH, 81, passed away on Tuesday, January 21, 2020. She was born in Thurmond, WV, to the late Walter B. Liptrap and India Anna Liptrap. Survived by her devoted husband of 63 years, Franklin Hurt, and sons Franklin "Jody" Hurt, Jr. (Julie), Robert Hurt and Gary …

Carol Sue Williams, 68, of Fayetteville, passed away on Saturday, January 18, 2020. Born on December 12, 1951 at Fayetteville, she was the daughter of the late Herman and Mary Agnes Perdue Goodson. Carol was a member of New Beginnings Church of God at Glen Jean. Survivors include her daughte…