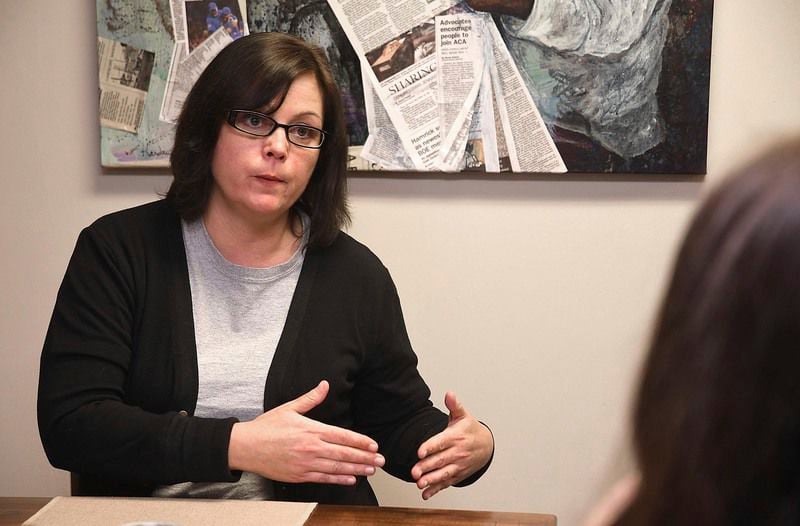 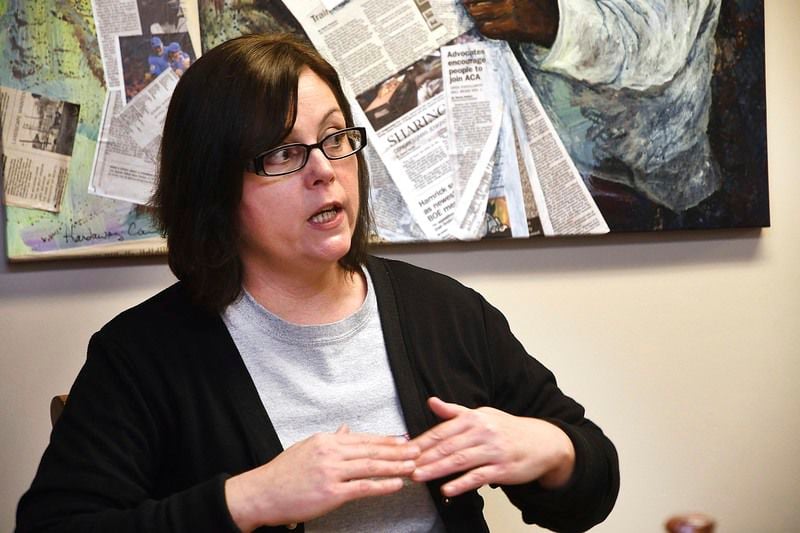 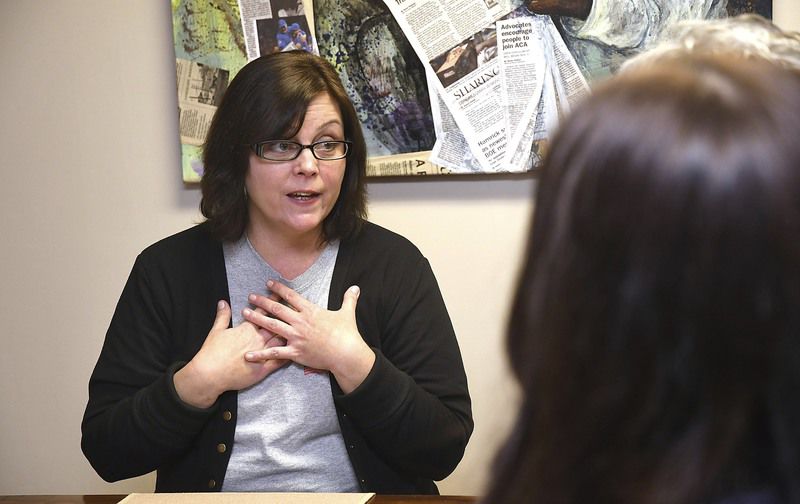 Paula Jean Swearingen is a coal miner's daughter and granddaughter.

Her perspective of being a West Virginian — and an American — was formed in the southern West Virginia coalfields.

When the U.S. went to war, her male forebears answered the call. Her grandpa served in the Korean War. When her dad returned from the conflict in Vietnam, he went back to work in the coal mines.

"I buried my daddy to cancer," said Swearingen, a Mullens native, on Tuesday. "He had black lung. I buried my grandfather to black lung.

"I drank acid mine drainage when I was a little girl," she said.

As an adult mother of four boys living in Coal City in Raleigh County, Swearingen worried that the silica dust that coal companies were dumping near her community would hurt her boys' lungs. She had concerns that highly toxic PCBs and other chemicals were polluting West Virginia's streams and entering citizens' drinking water.

Her neighbor's daughter developed bone marrow cancer. Doctors said the cause was environmental.

While she worried about the health hazards of industrial pollution on her sons and her rural community, Swearingen watched men lose their coal mining jobs to mechanization when the companies started mountaintop removal.

"I buried so many family members, I feel like my theme song is 'Amazing Grace,' " she said. "When my neighbor had cancer, I started fighting against mountaintop removal because it took jobs away from coal miners, and it was poisoning our water.

"It ruined our land."

"If another country came here and blew up our mountains and poisoned our waters, we'd go to war," she noted. "But they did it for the bottom dollar."

Swearingen was also a single mother. Health insurance and a living wage were dreams to many in southern West Virginia. From her perspective, West Virginians had built America during the Industrial Revolution. While coal barons in the state grew rich on their labor, the laborers were relegated to 1970s-style mobile homes, health problems and economic worries about the up-and-down cycle of coal.

Her sons are now all adults, and she is expecting her first grandchild. She's also become a surprising force in a focus campaign for U.S. Congress. She doesn't want West Virginians to be so exploited that they believe they are forced to choose between clean drinking water and a good paycheck.

"I got tired of begging," she described her decision to enter the political arena. "In 2012, during the Massey era, when they was saying, 'Tell them out of state tree-huggers to go home,' I was a mom, a coal miner's daughter, wanting those jobs.

"But there's no reason that anybody in America should beg for something so basic as a clean glass of water.

"There's no reason I should be sitting out at Coal City in a 1970s-model trailer, either, when our incumbents and our representatives in the industry got rich and left us with bread crumbs.

She ran against incumbent Democratic Sen. Joe Manchin in the 2018 midterm and garnered 30 percent of the Democratic primary vote. She also won more votes than any Republican on the primary ballot in a state that supported Republican President Donald Trump with 68 percent in the 2016 general election. Filmmakers followed her story for the Netflix documentary "Knock Down the House," about four female candidates who challenged big-money politicians.

Swearingen's castmate, Bronx bartender Alexandria Ocasio-Cortez, became the U.S. representative for New York's 14th Congressional District. Although Swearingen and Ocasio-Cortez come from different backgrounds and live in different parts of the country, Swearingen believes her experience in West Virginia is one that others can find relatable enough to send her to Washington, D.C.

She is taking on longtime Republican Sen. Shelley Moore Capito, the daughter of Arch Moore, who served twice as the state's governor. Moore was governor in 1972 when a Pittston Coal Company coal slurry in Logan County burst, causing one of the deadliest floods in U.S. history and killing 118 West Virginians.

"I'll tell you this," Swearingen said.  "My boyfriend was in the Buffalo Creek disasters. His baby sister was washed out of his mother's arms with Arch Moore, as corrupt as he was, standing behind the industry.

"We need to fight back."

The two women have vastly different backgrounds and come from different political parties. Swearingen believes the time is right for her life story to resonate with other state residents  — that of a single, working mom who fought for the rights of all West Virginians, regardless of political party.

"These are not partisan issues," she said. "When I label myself as a progressive, it's just because I feel like we need growth, we need real representation, West Virginians representing us.

"Who better to serve us than us? That's why people aren't going to the polls. They're tired of politicians.

"Joe Manchin was a Democrat," she said. "But who does he serve? His donors are the same donors as Shelley Moore Capito. What does that tell you?

Swearingen accepts donations only from individuals.

To go against Capito in November, Swearingen will first face off against fellow Democrat Richard Ojeda, who served in the West Virginia Senate from 2016 to 2019 and then ran a brief presidential campaign in the 2020 election.

Swearingen, 45, advocates for a diverse the economy, creating jobs with renewable resources and tourism. She also wants the natural gas industry to pay its fair share in supporting West Virginians.

Swearingen said she wants West Virginians to have a living wage. She is not advocating for $15 an hour or a set amount, she said. She pointed out that $15 an hour in California is not much. For many West Virginians, on the other hand, $15 would be a "game changer."

"We don't want small businesses to go bankrupt because we're paying $15 an hour."

"We're one of the wealthiest countries in the world, so there's no reason we can't provide Americans health care," she said.

"Not only is it moral sense, it makes economic sense. If you have happy and healthy people, you have more productive people," she added.

"A lot of West Virginians, with it being employee-based plans, your health care is dependent on what your employer can provide, so if you lose your job, you lose your health insurance, but more than likely, they pay a living wage.

"You can survive better, and (small businesses) can treat their employees better, if we get rid of the burden of having to pay high premiums to health insurance companies."

She is in favor of fully legalizing cannabis, which is still treated as a controlled substance by the federal government.

On a state level, Swearingen said she does not want West Virginians' economic opportunities taken away by out-of-state businesses. She pointed to $50,000 permit fees put in place by state lawmakers as being restrictive for many small business owners in the state.

"That needs to be put back in West Virginia," she said. "We fully need to legalize cannabis.

"Whether you support it or not, we'd see economic growth within six to eight months," she added. "But if we're going to regulate it, and it's going to be scheduled like that, we need to make sure our leaders in the Capitol put in legislation that you don't have to pay so much per permit.

"We create small business growth with that, instead of letting these out-of-state companies come in here and get rich off our backs anymore."

Swearingen is also a proponent of medication-assisted treatment (MAT) in addressing the opioid epidemic and wants more long-term addiction treatment centers in the state.

Swearingen said the average West Virginian is tired of political leaders. She said she cares about the issues that working-class West Virginians are facing, and those are the people she plans to advocate for in Washington.

She added that she is tired of worrying about the average West Virginian, like her own boys, developing health problems or worrying about finding a job to support their families. She wants her grandchild to grow up in a state that is good for the average West Virginian and that can offer a good job later — not a state where workers are exploited and the environment is polluted, so that a few grow wealthy.