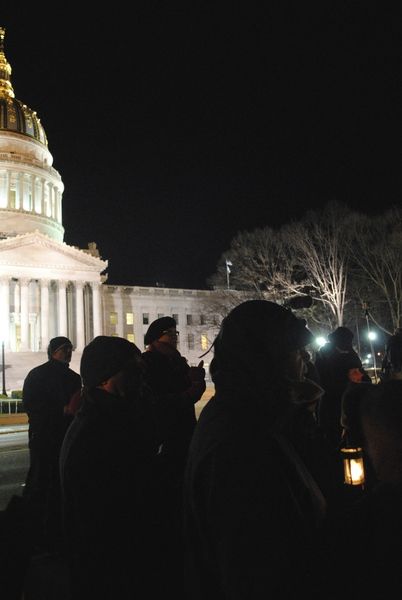 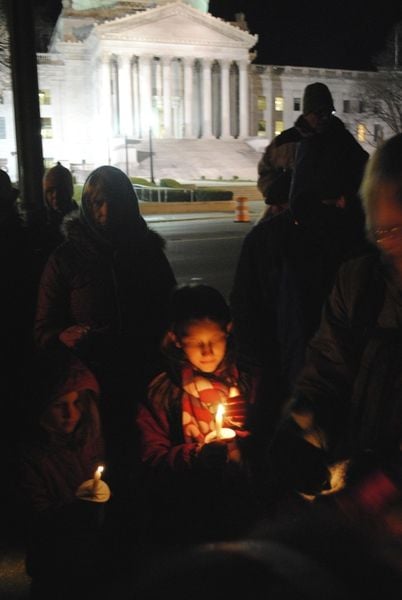 About 100 people attended a candlelight vigil Friday in Charleston to reaffirm that “water unites us” and to celebrate the strides advocates have made to protect water sources throughout the state. Citizens braved 23 degree temperatures along the Kanawha River across from the Capitol to mark the one-year anniversary of the chemical spill that tainted tap water for 300,000.

The Rev. Melvin Hoover and the Rev. Rose Edington told the crowd that despite the poisoning of the water and the damage done to small businesses, the area residents are survivors.

“We joined hands and what a difference we’ve made,” Hoover said. “Tonight we celebrate powerful action and change to build on.”

Edington said water is sacred, it is part of us all and we must honor, cherish and care for it.

Glenn McLernon, a Department of Environmental Protection employee in charge of stream and wetlands restoration, attended the vigil. He said he showered the morning of the chemical spill and was sick by the afternoon.

He commended the DEP for its handling of the disaster, and said one positive outcome from the spill is that West Virginia is now a leader in above-ground storage tank requirements.

Paul Dalzell, with Advocates for Safe Water System, agreed great strides have been made to better protect water in West Virginia, and he credits the presence and voice that citizen action groups brought to the Legislature in the weeks following the spill. And formal complaints filed by citizens have helped spur the criminal investigation against Freedom Industries, he said.

“We’ve gone forth and taken part,” he said. “Democracy works.”

Those present remembered the spill but vowed to move forward with water protection across the state.

“On the anniversary of the chemical spill, it is important to realize there are citizens that have struggled for clean tap water, and have struggled long before the spill,” said Paula Swearington, of Beckley. “It is time for us to worry about our children and creating a good, clean future for them.”

Robert Nuckles, of Kanawha Valley, said despite the religious or political affiliations of those in attendance, they all had one thing in common — concern for our water.

“This planet belongs to our children’s children,” Nuckles said. “No matter our beliefs, we come together in solidarity. We can make a difference.”

Donna Lee Adkins, 69, of Beckley, passed away Nov. 24th, 2021 at the Raleigh General Hospital. Per Donna's wishes there are no funeral or graveside services scheduled. To read more about Donna's life and leave online condolences please visit www.calfeefh.com. Arrangements by Calfee Funeral Home.