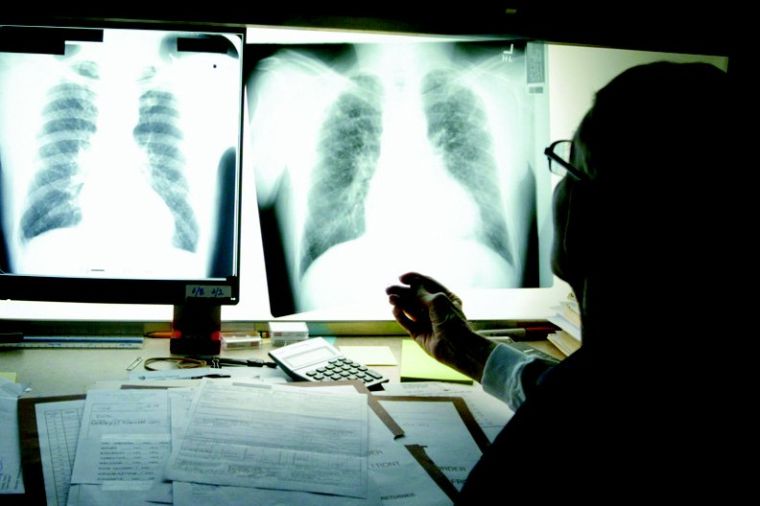 Dr. Donald Rasmussen, 85, shows no signs of slowing down. He has tested and analyzed some 40,000 miners during the past 50 years, and looks at hundreds of X-rays each year at his office to determine if patients have black lung disease. 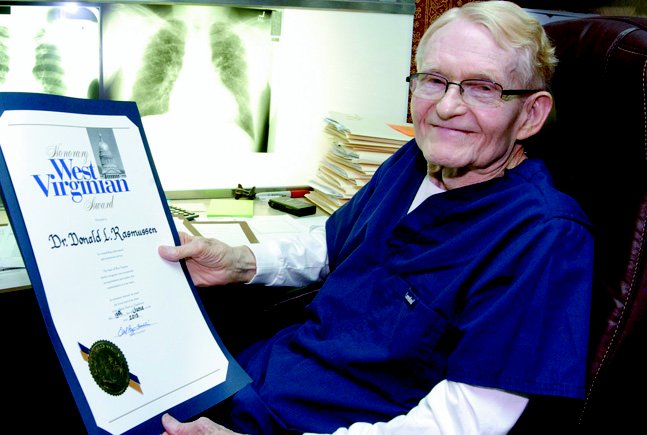 The physician recently was awarded a certificate making him an honorary West Virginian from the governor.

Dr. Donald Rasmussen, 85, shows no signs of slowing down. He has tested and analyzed some 40,000 miners during the past 50 years, and looks at hundreds of X-rays each year at his office to determine if patients have black lung disease.

The physician recently was awarded a certificate making him an honorary West Virginian from the governor.

Its symptoms range from shortness of breath during exertion to, in advanced stages, cases where patients are virtual invalids, wheezing for air even doing the simplest task such as walking across a room.

It starves the body of oxygen and forces the heart to work harder, leading to heart attacks.

In the nation’s coal fields, black lung is an issue affecting thousands of miners. It is a serious disease that is treatable but not curable. It is caused by exposure to coal dust, which destroys lung tissue.

“It has caused a lot of early deaths,” Dr. Donald Rasmussen of Beckley said during an interview recently.

In 1962, a young doctor from Manassa, Colorado, saw a help wanted advertisement in a medical journal needing doctors in Beckley at the then Miners Memorial Hospital.

“I was looking for a place to set up practice after getting out of the Army,” Rasmussen recalled. “I had never been to West Virginia and was a little skeptical about the move.”

But when the doctor arrived in Beckley he was impressed with what he saw. “The scenic beauty of the area, the wonderful people who lived here and the staff and the work going on at the Miners hospital were simply amazing.”

Rasmussen began working with coal miners, which would become his life’s mission. “Before I came here, I really had no exposure or knowledge about coal miner’s lung disease, known today as black lung,” he said.

Rasmussen says he began to see many miners who experienced shortness of breath and other trouble with their lungs and breathing. “I was asked to evaluate some of the miners.”

The doctor’s evaluation included breathing and exercise tests to determine any respiratory problems. Then he began writing reports for some miners for Social Security disability and others who were filing workers’ compensation claims as a result of respiratory problems.

He served as an expert witness before state and federal judges. These cases usually involved the awarding of benefits to a miner, his widow or his dependents.

For coal miners and their families, Rasmussen became known as the “doctor with a heart.”

But Rasmussen said he was just doing his job. “I wasn’t trying to take one side over another,” he explained. “But I saw a lot of injustice being done to coal miners and their families.”

Rasmussen would meet with coal officials, coal operators, miners, lawmakers and he even went to Washington in 1968 to testify before a congressional subcommittee. “I was invited to testify,” he said. “That was the first time I did any advocacy work, trying to explain to congressmen the problems miners were having.”

The coal companies hired doctors to dispute Rasmussen’s research and findings. “I wasn’t trying to make anyone mad,” he said. “I was just doing my duty as a doctor, which was to take care of my patients in whatever capacity needed.”

At age 85, Rasmussen continues to analyze X-rays. He moved his office to 417 Carriage Drive just off Harper Road a few years ago.

“I never felt I was leading a charge,” he said. “I never saw myself as a crusader or advocate. I saw the coal miners who needed help and I just told what I had learned while working with them. It was all in the scope of my job. I was just a physician performing my duty.”

But history has proved, and will continue to show, that five decades of work and research conducted by Rasmussen has had a tremendous impact on a program that aids miners afflicted with black lung.

One of the most widely suffered occupational maladies in the U.S., black lung is actually an all-embracing term for a number of ailments all believed to be caused by breathing coal dust. It was first diagnosed in Great Britain in 1813, yet in all the years since, no cure has been found for the disease that kills some 4,000 U.S. miners every year.

An estimated 70 percent of underground coal miners will be afflicted with some form of black lung during their lives.

To Rasmussen, a pulmonary specialist who has spent 50 years battling the disease, it is still a perplexing puzzle. “There’s no sense to it,” he said. “Some miners can work 50 years in the dustiest conditions and not develop any difficulty. Others can work 10 years or less and suffer significant loss of lung function.”

The symptoms are severe shortness of breath, a racking cough and a near suffocating buildup of mucus. Oxygen and medication are prescribed to relieve the periodic attacks of suffocation.

Rasmussen figures he has tested some 40,000 coal miners during the past 50 years. He insists that prevention is the best weapon against the disease.

Over the years he has been a tireless speaker before miners’ groups, legislatures and congressional hearings; he has urged better health standards for miners who toil underground.

“He is worshiped by miners all over Appalachia,” says one colleague. “He was the first really qualified pulmonary physician to take black lung seriously, and miners have never forgotten.”

Decades ago, work by Rasmussen and others led to the passage of the Federal Coal Mine Health and Safety Act in 1969, which established standards for coal and rock dust levels in mines. The deadly Farmington mine explosion in November 1968 also brought national attention to the working conditions of mines.

The Safety Act mandates that coal dust in an underground mine should not exist in concentrations higher than 2 milligrams per cubic meter of air. That standard is stricter when the dust contains at least 5 percent silica.

The good news is the passage of the Act led to a dramatic drop in black lung rates.

Now, though, rates are rising again, and the disease appears to be striking miners at an earlier age than it has in the past.

It’s a problem that can’t be ignored in West Virginia.

The state accounted for 1,050 federal black lung claims of the 4,900 filed in the nation last year, according to the U.S. Department of Labor. About 13 percent of West Virginia coal miners who have had chest X-ray screenings are found to have black lung, as compared to a national average of 9 percent, reports the National Institute for Occupational Safety and Health (NIOSH).

From 1968 through 2007, black lung caused or contributed to roughly 75,000 deaths nationwide, according to government data. In the decades following passage of the 1969 law, rates of the disease dropped significantly. Then, around the late 1990s, this trend reversed.

Rasmussen, meanwhile, is regarded as one of the world's leading experts on black lung. While coal mines have done much over the past 40 years to help alleviate some of the issues that lead to black lung, such as coal dust, Rasmussen believes that new, more powerful and efficient mining equipment is leading to the disease’s resurgence.

“The current mining machines are so much more powerful than the old ones,” the doctor said. “They can mine coal with a lot of layers of rock. The power releases a lot of coal dust and silica, too. The more silica in the dust, the more toxic it is.”

Black lung is known officially in medical circles as pneumoconiosis, but it’s been called miner’s asthma and miner’s cough. Regardless of the name, more and more cases of black lung disease are being reported-particularly in Southern West Virginia, Virginia and Kentucky, research indicates.

In other words, black lung disease is increasing among miners. Even relatively young miners who’ve spent their whole careers in mines that were supposed to be under federal dust control standards have been found with advanced disease. At the same time, however, compensation for miners who get black lung disease has been shrinking.

For the miner to convince the federal black lung program that the mining company where he worked owes him compensation for the damage done to his lungs is not an easy task. The miner had better be prepared for mountains of paperwork, and hearings and appeals that can go on for about seven years.

Rasmussen, who does medical examinations of miners for the Department of Labor, says it’'s not a rare occurrence for there to be 10 to 12 years of appeals, with the mining company usually opposing the claims.

“It takes a long time to succeed,” Rasmussen said, “and a miner is not assured of winning anyway.”