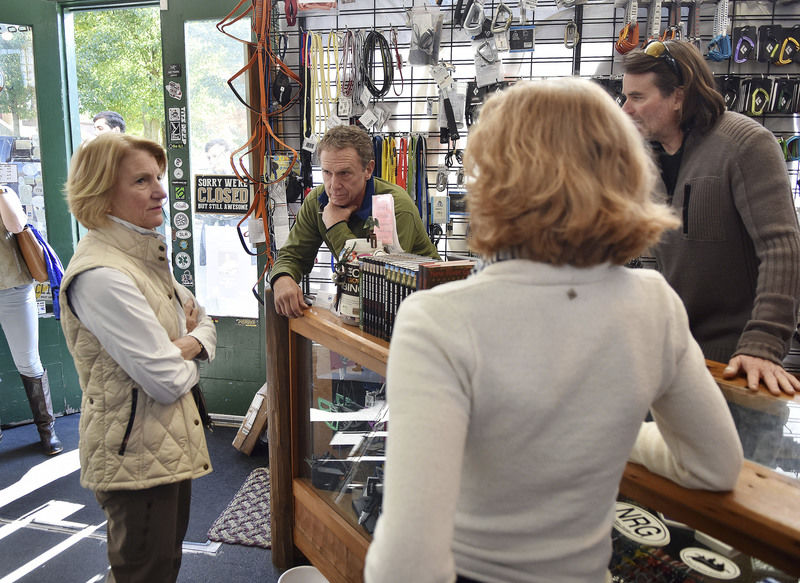 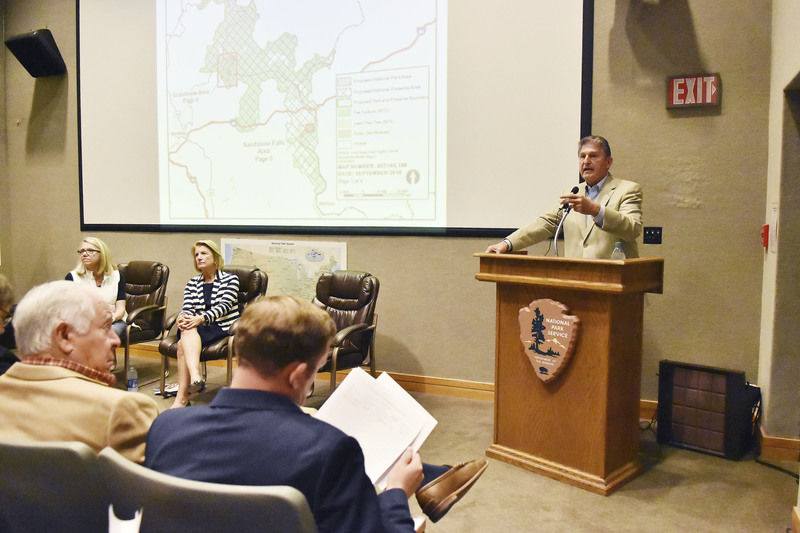 Capito introduced similar legislation in October 2018, but the bill didn’t advance – mainly because hunting was going to be restricted.

Both senators say a National Park designation will create a boost in tourism benefiting the state economically.

“Redesignating this and putting a gold medal stamp of a national park on this area says that West Virginia is a beautiful, attractive, spectacular place,” Capito said. “We want to share it with the nation and care for it at the same time.”

Both senators told The Register-Herald they are still working on the final border lines for the new legislation.

As of now, the National Park and Preserve will consist of 72,186 total acres.

The National Preserve side will be approximately 64,495 acres, and hunting and fishing will be allowed in accordance with the National Parks and Recreation Act.

The National Park side will be approximately 7,691 acres and composed of four areas: the Lower Gorge, Thurmond, Grandview and Sandstone Falls.

Hunting will be restricted in the National Park area.

Some areas that will make up the National Park already restrict hunting. However, hunters and West Virginia sportsmen groups say they are not happy as they’ll lose approximately 4,385 additional acres of hunting land if the legislation goes through.

West Virginia Wildlife Federation President Jerod Harmon said, “We will not support any additional restrictions to hunters, anglers or trappers.

“We could have considered support only if sportsmen would get increased access or something of benefit. However, it doesn’t appear to help us.”

Hettick told The Register-Herald he’s not in “flat out opposition” of the legislation if it can help the state economically.

However, he’s not “carrying the senators’ weight” in support of it.

Capito has said the public hunting land that could be eliminated is steep terrain that would be difficult to hunt.

However, she says she’s had staffers on the ground surveying the area and plans to walk the ground herself soon.

“If adjustments need to be made, we’re looking into it,” Capito said. “If it stays the way it is, there’s still 64,000 acres that are open and ready for all the different hunting groups that have hunted there for years and want to continue to do that.”

“There’s more to it if you put boots on the ground, which many politicians haven’t done. Get out there and walk,” Coleman said.

If you look at the New River Gorge area from a raft floating down the river or the overlook atop the bridge, the land does appear steep, he added.

However, “there are log roads and old tram roads all over it that are pretty much level with flats on top.”

“We’re vertical,” Beck said, referring to the land hunters are used to navigating. “Everywhere we hunt, there isn’t an easy way into anything.”

He also says his organization is not in support of the legislation.

“The bear hunters – we’ve never been for it at all. Any land we lose, we lose it. We’re not getting it back. It’s no longer available to us,” he said. “Public hunting has gone down a lot, because we’re losing public land."

Larry Case, a former Department of Natural Resources game warden and an outdoor columnist for The Register-Herald, says taking any land away from West Virginia hunters is “unacceptable” and local hunters “should be very concerned.”

He says, “We shouldn’t agree to give away one single acre of hunting land.”

He’s also fearful that the National Park Service will take more control and put even more restrictions into play whether it be on the river or land.

New River Gorge professional fishing guide Charles Mooney says he is not in support of it either.

“Folks are thinking this is going to be a sudden fix – predominantly toward the rafting numbers being down,” Mooney said. “Hunters are going to get locked out of more land they can’t use. And most of the folks I talked to see the rafting companies pushing this.”

Division of Natural Resources Director Stephen McDaniel said in a written statement the proposed legislation keeps “losses to a minimum.”

“We are always cautious and concerned anytime we face the possibility of losing public hunting lands,” McDaniel wrote.

He added that the DNR has added more than 100,000 acres of public hunting lands in the past three years that they have acquired and opened as various Wildlife Management areas.

He believes those “gains greatly offset any loss of hunting land in this proposal.”

“We will continue to monitor this situation and work collaboratively with all stakeholders to balance the best use of our state's wonderful natural resources,” McDaniel said.

Manchin and Capito say they are not adding any type of park entrance fee into the legislation. Some national parks charge as much as $25 to $30 a vehicle to enter.

“I can’t say in the future” that a fee won’t be incurred, Manchin said. “Never say never, because you never know.”

Manchin says his staff is being careful in how they draft the legislation.

The hunters may lose some traditional hunting land; however, “we're reconciling all the maps,” he said.

“If the terrain was so rugged, it would be limited,” he added.

In the end, Manchin says he'll do “what’s best for the public and helps the economy.”

He originally would not sign on due to the hunting limitations in a National Park, as he says they don’t support West Virginia’s generational hunting culture.

Manchin is in support of the National Park and Preserve model, which he says will have a positive economic impact on West Virginia.

“If they want to do something, we know a national park and preserve will work,” he said. “Any type of national park designation brings a tremendous amount of exposure.

“We know it will increase visibility and hopefully economic vitality.”

“I think overall, if they can come to a solution or can negotiate where they can all be happy, I think it would be a great thing for Fayette County,” Scalph said. “It would increase tourism, which would immensely help the economy in the area."

Becky Sullivan, president of the Fayette County Chamber of Commerce and director of the New River Gorge Convention and Visitor’s Bureau, said, “We are totally in support of it.”

“We think it will be a great thing for the area to boost tourism and the impact will be great for our local economy,” Sullivan said.

“We have treasures here that few have and the beauty of outdoor adventure tourism is being able to share our natural resources and our love for our environment,” Wilson said.

He believes that as visitation grows with a National Park and Preserve model, communities all the way from Hinton to Gauley Bridge will grow to support it.

She believes the town of Fayetteville is prepared to hit the national stage.

“We hit the national news in a negative fashion frequently,” Kistler said. “I think we’re a well-kept secret and we need to work harder to tell our story to the nation about the wonders of this place.

“I believe our resources warrant the designation,” she added.

Lizzie Watts, superintendent for the New River Gorge National River, said the National Park Service has not come out with a consensus opinion.

However, former acting NPS director Danny Smith was openly in favor of it.

Headwater Economics, a nonprofit research group, released the results of a study in May 2018 that found eight western U.S. national monuments redesignated as National Parks saw a 21 percent average increase in visitation after five years. However, “there is significant variability between case studies," the study reported.

Of the eight National Monuments studied, five had more visits after the redesignation and three had fewer visits.

Ray Rasker, the study’s lead author, told The Register-Herald that his study is irrelevant to West Virginia.

One cannot compare monuments on the west side of the country to West Virginia, he said.

“This is a study in completely different geography,” Rasker said. “It’s inappropriate to assume a study on that end of the country is going to have the same results there.”

Rasker said he hasn’t conducted a study on this area.

“How this plays out locally and whether it creates more visitation, more spending and more jobs depend largely on what you do with it as a business community,” Rasker said.

The national preserve category was formed to protect “activities like hunting and fishing or the extraction of minerals and fuels,” according to the National Park Service.

There are currently 19 national preserves in the U.S.; 10 of them are in Alaska.

Big Cypress in Florida and Big Thicket in Texas became the first U.S. National Preserves in 1974.

Capito and Manchin say they are hoping to have the New River Gorge National Park and Preserve approved by the end of 2020.

There will be an open hearing and public markup prior to it going through, Manchin said.

Capito said redesignation “is not as complicated as full-blown new carveout” and should reasonably happen in the time frame they’re estimating.