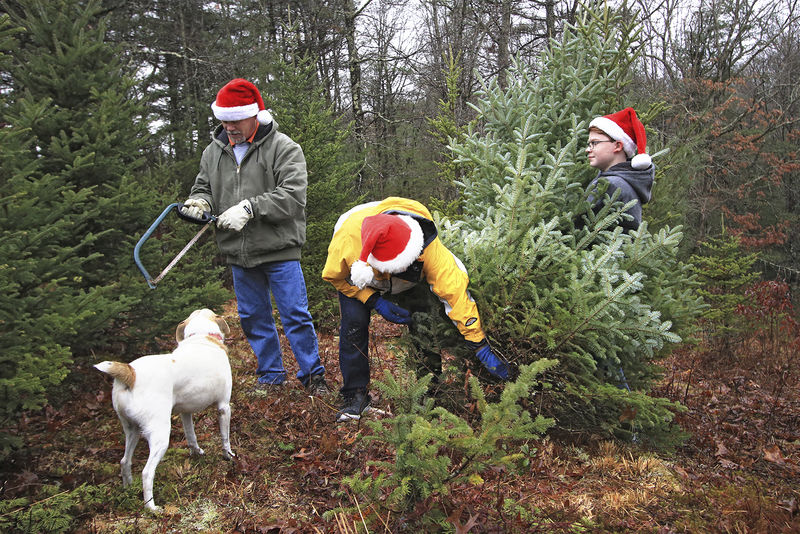 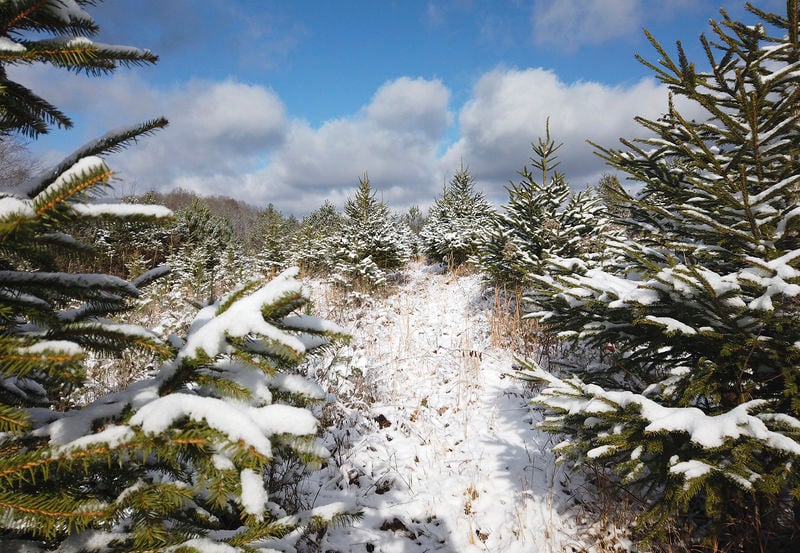 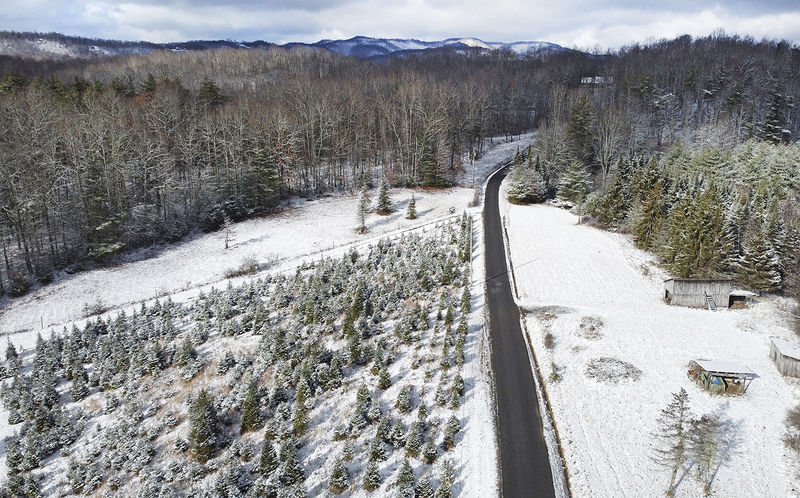 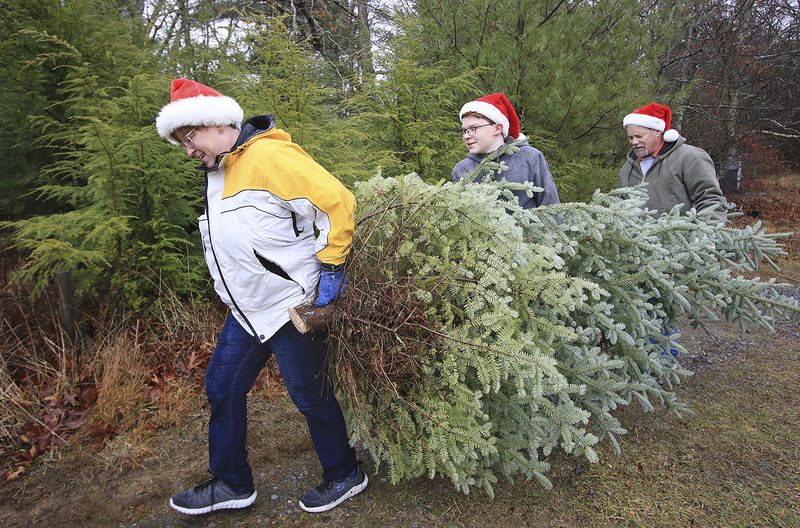 Sherry Counts, Matthew Counts and Greg Counts, of LIndside, haul their fresh cut tree from Bluestone Nursery Saturday. The family has been getting their Christmas tree from the choose-and-cut Christmas tree farm for 15 years. (Jenny Harnish/The Register-Herald) 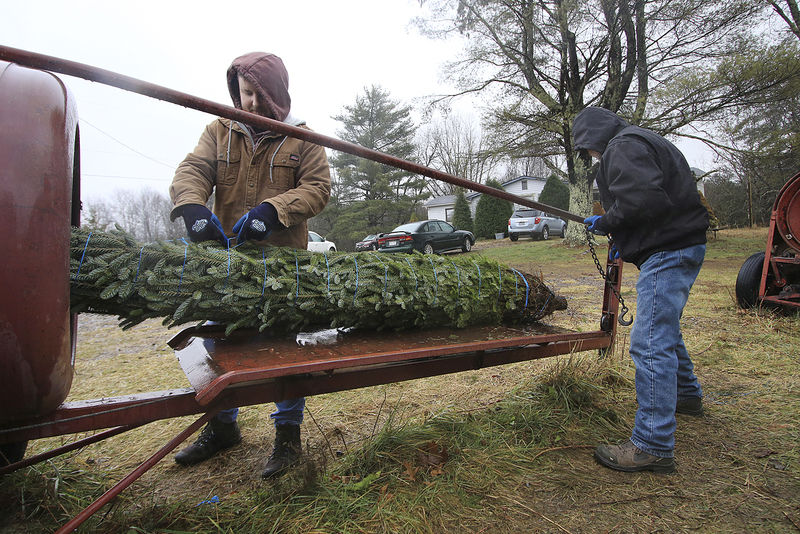 Dave Stevens, right, and his son Jesse Stevens bail a tree for a customer at Bluestone Nursery in Camp Creek Saturday. The family farm has been operating since the early 1960's. (Jenny Harnish/The Register-Herald) 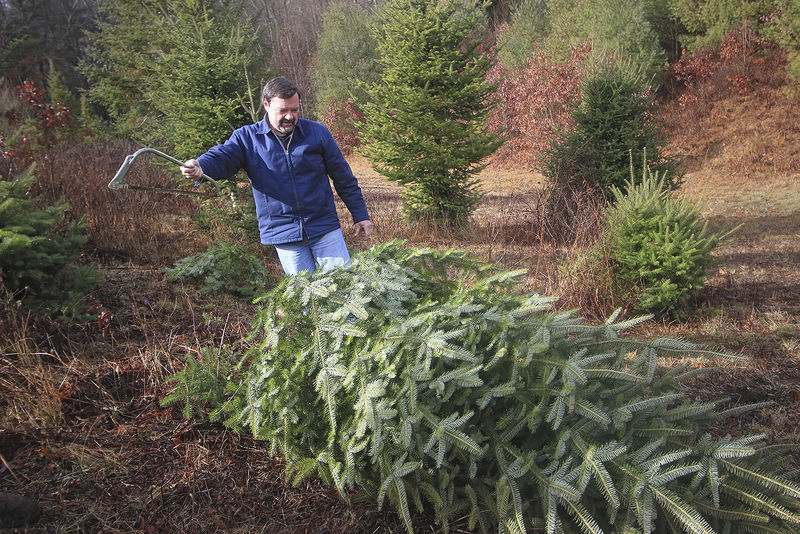 Mike Jones, of Tazwell, looks over his tree at Bluestone Nursery Saturday in Camp Creek. His family has been getting their Christmas tree from the farm for the last seven years. (Jenny Harnish/The Register-Herald)

Sherry Counts, Matthew Counts and Greg Counts, of LIndside, haul their fresh cut tree from Bluestone Nursery Saturday. The family has been getting their Christmas tree from the choose-and-cut Christmas tree farm for 15 years. (Jenny Harnish/The Register-Herald)

Dave Stevens, right, and his son Jesse Stevens bail a tree for a customer at Bluestone Nursery in Camp Creek Saturday. The family farm has been operating since the early 1960's. (Jenny Harnish/The Register-Herald)

Mike Jones, of Tazwell, looks over his tree at Bluestone Nursery Saturday in Camp Creek. His family has been getting their Christmas tree from the farm for the last seven years. (Jenny Harnish/The Register-Herald)

During Christmas tree season, Gene Bailey says it’s not uncommon to see vehicles with license plates from seven or eight different states parked in the gravel driveway of Bluestone Nursery in Camp Creek.

“We’re located fairly close to the interstate and we get people from Michigan, Florida, North Carolina,” he says.

The holiday travelers mix in with locals looking for an authentic Christmas experience and the perfect freshly cut tree.

Bailey grew his first trees on the Camp Creek land in 1964, but his very first Christmas trees were grown much earlier than that.

“I guess I planted my first trees in 1946 in the eighth grade,” he says of those first 1,000 Scotch pine trees. “Daddy had a hillside that was real steep and I thought that was a place to put them.”

He says the trees flourished on that hillside — although they were difficult to manage — but they didn’t have time to do too much, as the West Virginia Turnpike came in in the early 1950s and took them all out.

Today, that steep hillside is a paved portion of I-77 just north of the Princeton exit and visitors to Bailey’s 97-acre Christmas tree farm often drive right over the spot where it all began.

That early experience, however, piqued his interest in horticulture and started him down a lifelong path, building traditions for generations of families, including his own.

Bailey’s initial crop of trees might have been doomed, but his green thumb began to flourish in high school and college when he worked for a local doctor who grew Christmas trees and operated a nursery.

“His family had been growing trees since 1939,” Bailey recalls. “I planted trees, shaped trees, grew nursery stock, worked in the greenhouse and did a lot of landscaping.”

Bailey even continued to work for the doctor after he graduated from Concord College (now University) with education teaching degrees in science and social studies.

He was still working for the doctor in 1964 when a friend drove him up to see a 57-acre tract of land on Stovall Ridge Road.

“I thought maybe that would be a suitable place for Christmas trees,” he says. “I kind of wanted to get into it for myself. So I purchased the land in early 1964 and started planting trees.”

Five years later, he left his job and put his education degree to use, teaching during the day and driving to the farm in the evenings to work the land.

But it wasn’t until 1990 that Bailey, who had retired the year before, and his wife Betty acquired an additional 46 acres, including the house in which he lives, and moved onto the farm.

That’s also when Bluestone Nursery began to transition to choose and cut, making the move away from a strictly wholesale business.

“I didn’t have time to be up here to take care of that part when I was teaching,” he says, explaining the busy schedule. “Before, I had to run up here each day and do what little bit of work I could after it got dark when we had a good, full moon.”

“I remember one of the first times I helped you, right after Sara and I got married, we were cutting trees down by the headlights of a truck,” he says, smiling.

He now uses two canes to maneuver what was once a 6-foot-5-inch frame, but the former Princeton mayor and current 25-year Mercer County Board of Education member still gets around.

“All of this belongs to David and his family now with the provision that I still live here as long as I’m able,” Bailey says. “David does all the work.”

“Well, not all of it,” Stevens says with a chuckle.

The men explain each of Stevens’ six children, now grown and most with families of their own, worked the farm as kids.

“They earned a lot of college money,” Stevens says. “And they all come back now and help us some on the weekends when we’re busy during tree season.”

And Bailey, who says he’s now mostly relegated to sitting and making wreaths and occasionally shaping whatever tree he can reach from a tractor, continues to pass along more than seven decades of knowledge.

Bailey says some things have changed through the years, but not all.

He no longer grows Scotch pine, as he says they fell out of favor long ago. Visitors to Bluestone Nursery will find Canaan fir, spruce and the occasional pine tree now.

He did, however, make the decision to raise his prices this year for the first time in about 10 years.

Some places charge by the foot, but all trees at the farm are $25, although the men say a tiny tree would probably run $10 or $15.

Bailey says he knows that price is much lower than other places, but says he’s conservative.

He says he “just hates to raise prices,” and offers an example of how he’s kept prices low while other prices have gone up.

“I used to buy a nice Ford 350 pickup truck for 400 Christmas trees and now even with the price increase it will cost me at least 2,000 Christmas trees," he says. "So you think of it that way, and you’ll see our prices have stayed much lower than prices in general.”

Bluestone Nursery is open through Dec. 23, seven days a week from 9 a.m. to 5 p.m., but the busiest days by far are Saturdays and Sundays when 85-100 trees leave the farm.

Bailey says weekdays can be so slow they often wonder if they should adjust the schedule.

But the Thursday hours worked well for Princeton residents Kevin and Steven Parker.

Kevin Parker and his wife Nancy Lohuis cut down their first Christmas tree at Bluestone Nursery in 1993.

The Canadians were newly arrived in West Virginia and eager to find a Canaan fir, something not available back home.

As their family grew to add sons Sean and Steven, a trip to secure the perfect tree became part of their holiday tradition.

Kevin and Steven were on their own this year though, as Sean is now a medical student at WVU and Nancy spent the afternoon at work.

But the men were not deterred as they headed out into the fields of trees, gloves and saw in hand, and smiles on their faces.

In fact, Steven, a student at Virginia Tech, drove in for the afternoon just to get a tree.

“All the years of my childhood, this is the tradition that I remember and associate the most with Christmas,” he says. “Even more so, in some ways than Christmas Day. This kicks off my favorite time of the year.

“This is our family tradition.”

And Stevens says the farm will be his family’s tradition, and Bailey's legacy.

“It would be nice if some of them (children) would come back and keep things going,” he says. “I believe they will in some fashion. They all have developed a love for this farm and even for the work. And, from my perspective, it shows what a great love they have for their grandfather and for the work he has done.”

Bailey, head bowed slightly as he wipes at his eyes, says those words are important to hear.

"To carry on something that my wife and I started and passed down through the generations,” he says, his voice trailing off. “It gives you some feeling of continuity. Some feeling of immortality.”

Bluestone Nursery is at 3517 Stovall Ridge Road in Camp Creek.