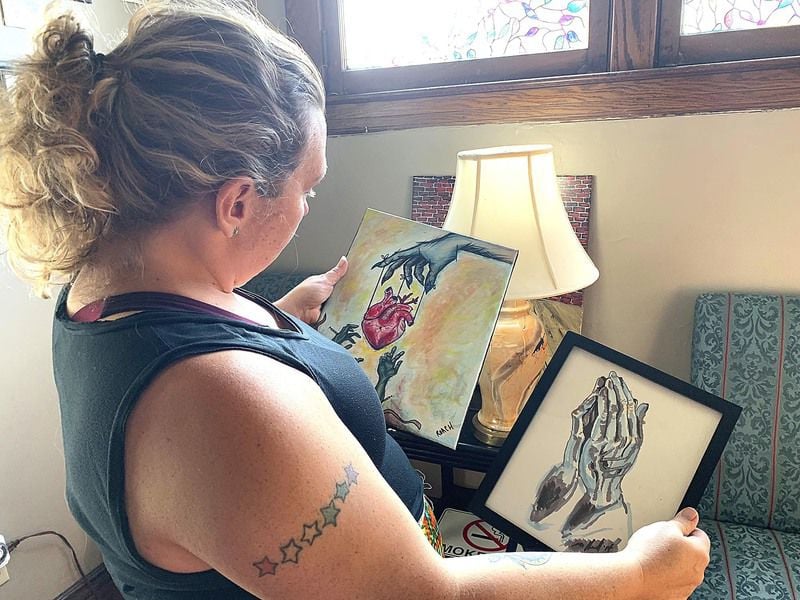 Sarah Cordwell, co-leader of Solutions Oriented Addiction Response, takes a moment to appreciate some of the artwork featured during a recent SOAR art show. People with experiences with addiction contributed their work.(Erin Beck/The Register-Herald) 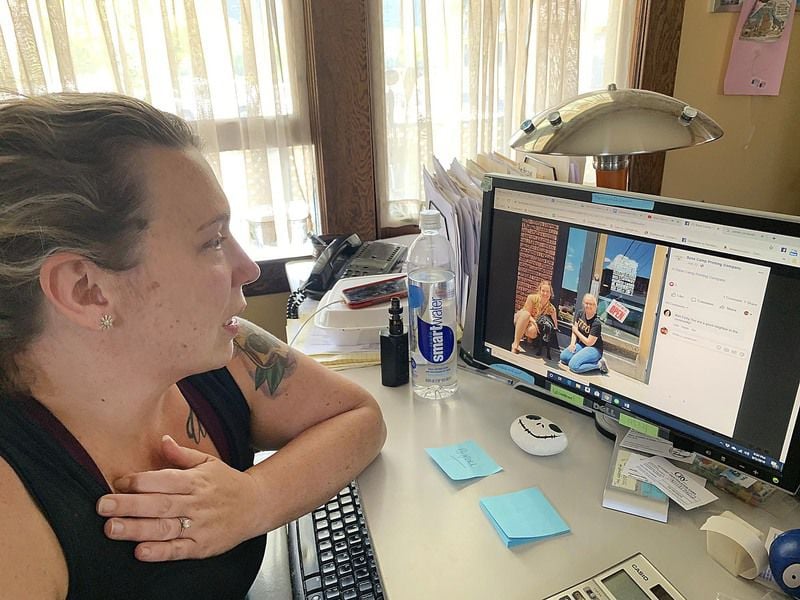 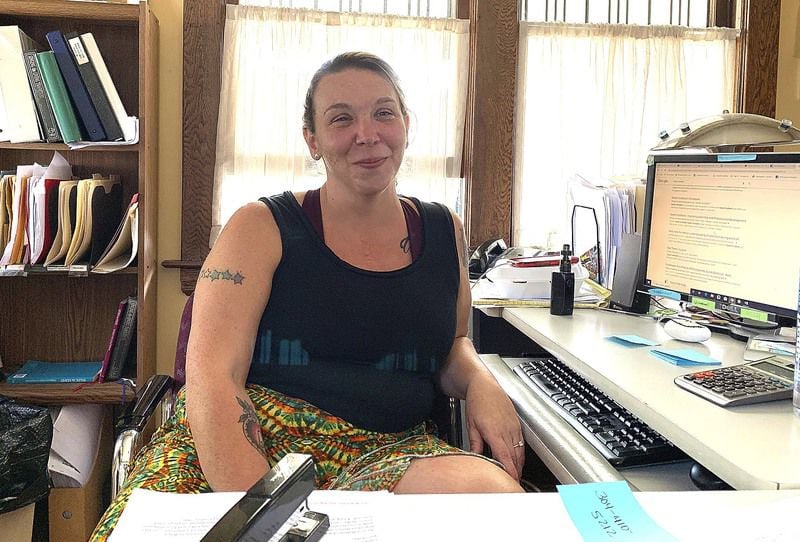 Erin Beck/The Register-HeraldSarah Cordwell, co-leader of Solutions Oriented Addiction Response, feels a new sense of hope in Charleston surrounding the addiction epidemic. Her grassroots groups is made up of many people with experience with addiction who want to help end the crisis.

Sarah Cordwell, co-leader of Solutions Oriented Addiction Response, takes a moment to appreciate some of the artwork featured during a recent SOAR art show. People with experiences with addiction contributed their work.(Erin Beck/The Register-Herald)

Erin Beck/The Register-HeraldSarah Cordwell, co-leader of Solutions Oriented Addiction Response, feels a new sense of hope in Charleston surrounding the addiction epidemic. Her grassroots groups is made up of many people with experience with addiction who want to help end the crisis.

charleston — On afternoons throughout the summer, Joe Solomon and others carried clipboards, knocked on local businesses’ and churches’ doors in Charleston, and made their pitch.

What about liability, they’ll ask. Can we get sued?

Solomon tells them that the law protects them.

Then, they start opening up. Inside a humble church with just a couple dozen chairs on Charleston’s West Side, people shared their stories of recovery.

At Dem 2 Brothers And A Grill, the owner, Adrian Wright, says no at first. Liability. His voice rises.

But Solomon keeps the conversation going.

Soon enough, Wright opens up, too, about a woman he’d found overdosed. You can hear the desperation he felt as he recalls putting cold towels on her, trying to wake her up. The cops and fire/EMS got there, but they didn’t seem like they even cared, he said.

The opioid crisis is real to him.

He saw it with his own eyes, he tells Joe.

He felt it with his own hands.

Eventually though, he decides that he will carry naloxone, the opioid overdose reversal drug, in his restaurant.

The canvassers will be back the following Tuesday, to train his employees on how to use it — their form is a simple nasal spray.

Amid the ongoing opioid crisis, volunteers with the Charleston-based Solutions Oriented Addiction Response Group have turned to old-fashioned organizing to make their case.

Not for a politician or product. Not for a religion.

“The message is that life is worth saving,” Solomon said. “You can’t erase stigma, but you can make it so it doesn’t dominate the town square anymore.”

In the spring of 2018, television news ran stories about “needles everywhere,” eventually leading to the demise of Charleston’s needle exchange program. Such programs reduce the spread of infectious disease by providing clean syringes to people who use drugs.

The mayor at the time, Danny Jones, warned of “criminal vagrants,” moving to the town from out of state to seek syringes and to commit crimes.

Research suggests that needles in public places are associated with drug use, not needle exchanges. And later, local homeless service providers and local homeless said that most of those without homes were from Kanawha County and southern West Virginia.

But for a while, you could feel the fear in Charleston.

Now Sarah Cordwell, one of the leaders of SOAR, along with Solomon, feels a sense of hope.

Cordwell, along with Joe and Cathy Kunkel (now a candidate for Congress in West Virginia’ Second District), decided they had to do something.

So they decided to hand out a dairy product – ice cream – outside Akers’ office.

If people were cattle, then...

Eventually, the grassroots group took on a name: Solutions Oriented Addiction Response, or SOAR, for short.

They had talked about how people in active addiction weren’t able or willing to speak up for themselves during such a vitriolic time in Charleston.

But now, dozens of people, including people in recovery, people still addicted, health professionals and others, show up at their monthly meetings.

Cordwell has been in recovery for a little over five years.

In an interview, she said most of the group is made up of people with experience with addiction.

“No one knows what we need but us,” she said.

The group that canvasses local businesses, Charleston Lifesavers, is one of their long-going working groups.

They also plan public events, such as the upcoming Glow Run for Recovery, and have planned two art shows. For a recent show, people with lived experiences painted their perspectives of addiction.

“Because they are,” she added.

Then she realized she needed to focus on what she could do, instead.

She also feels a responsibility.

“Our lives depend on other people in recovery,” she said, referring to people who’ve experienced addiction. “So if there’s none of us left, we’re all gone.”

They have no money. They often make their decisions via Facebook and in members’ dining rooms.

But people bring their best ideas and “their best intentions,” according to Cordwell.

Next, they’re talking about lobbying at the Capitol for “ban the box” legislation, which forbids employers from discriminating against people with criminal records.

They still have haters, Cordwell says. Some people on Facebook will attack businesses who carry naloxone.

The owner of Base Camp Printing responded by making a donation to SOAR for every comment, negative or positive.

And as for human to human, face to face contact with people in recovery, with no keyboards involved – well, Cordwell says that’s a different story.

The women who live at the recovery residence, Recovery Point Charleston, have also canvassed with Charleston Lifesavers.

“I’ll tell you what, no one says no to Recovery Point women,” she said. “I’m telling you, it’s very difficult to do. Think about it. You walk into a business and say, ‘This is what saved my life. Are you willing to have it here?’ What do you say to that?”

“You can already feel things are changing,” Cordwell said. “I can. I think the story is changing. I think the people in Charleston care about their community. They’re going to do the work necessary. And I think we have the leadership for it right now.”

SOAR meetings are held on the fourth Wednesday of each month, at 6 p.m. at St. John’s Episcopal Church in Charleston.