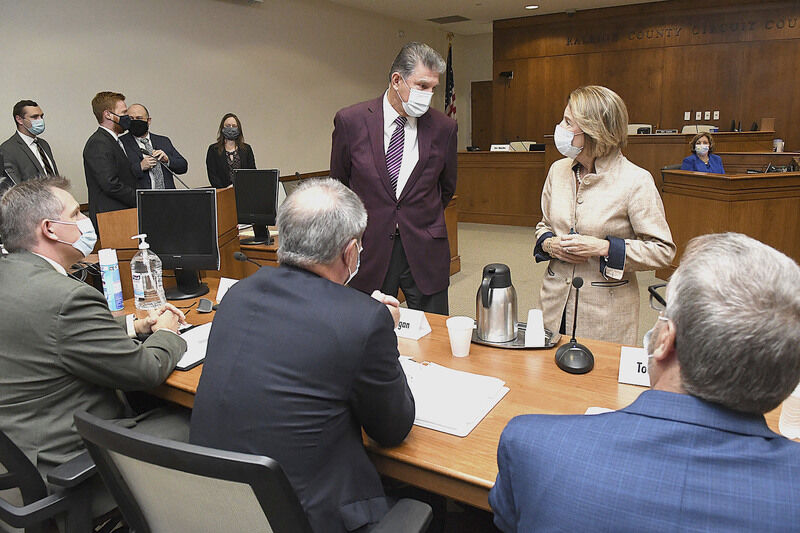 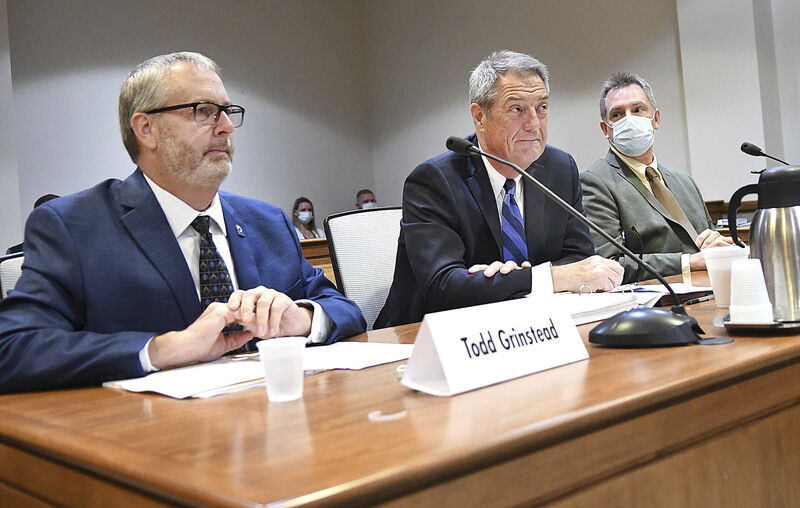 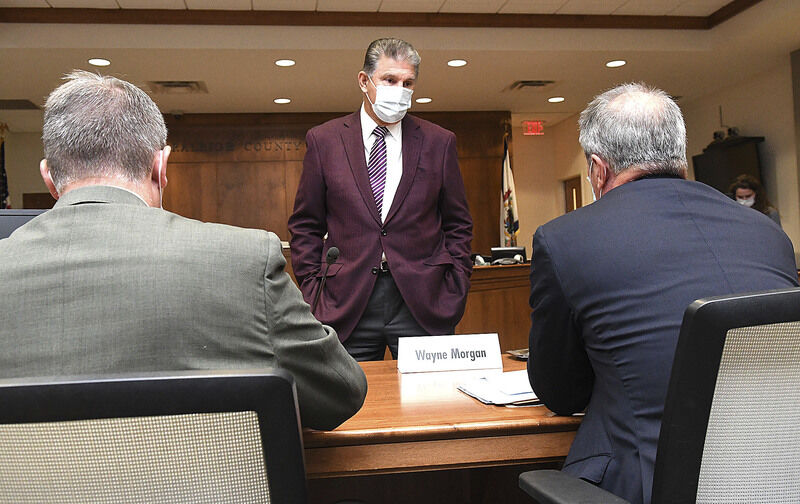 Sen. Joe Manchin, center, has a discussion with witnesses Jason Roberts, executive director, Region One Planning and Development Council, left; and Wayne Morgan, executive director, WV Infrastructure and Jobs Development, prior to the Senate Committee field hearing Thursday morning in Beckley. The focus of the hearing was water and wastewater infrastructure.(Rick Barbero/The Register-Herald) 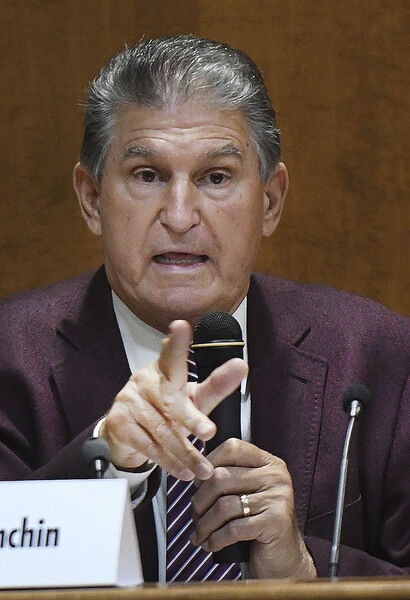 Sen. Joe Manchin speaks during the Senate Committee field hearing Thursday morning in Beckley. The focus of the hearing was water and wastewater infrastructure.(Rick Barbero/The Register-Herald) 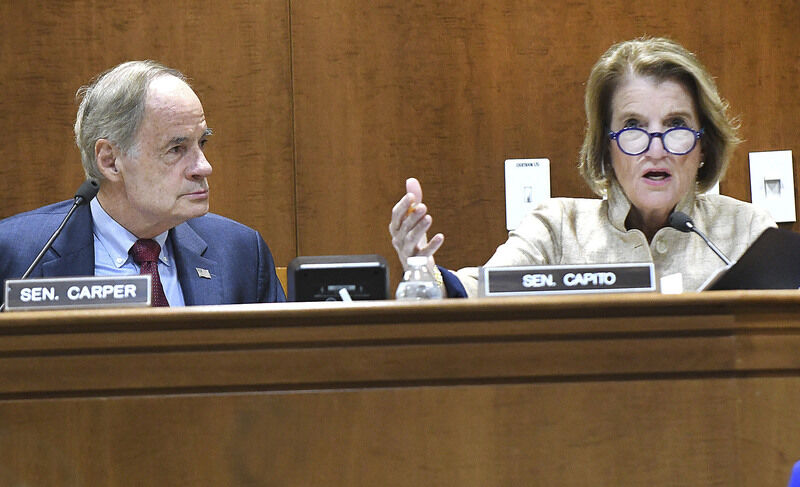 Sen. Joe Manchin, center, has a discussion with witnesses Jason Roberts, executive director, Region One Planning and Development Council, left; and Wayne Morgan, executive director, WV Infrastructure and Jobs Development, prior to the Senate Committee field hearing Thursday morning in Beckley. The focus of the hearing was water and wastewater infrastructure.(Rick Barbero/The Register-Herald)

Sen. Joe Manchin speaks during the Senate Committee field hearing Thursday morning in Beckley. The focus of the hearing was water and wastewater infrastructure.(Rick Barbero/The Register-Herald)

Consolidation and rate increases are key to upgrading West Virginia's aging water and sewer systems, where 30 percent of residents are unserved with drinking water and 40 percent are unserved with wastewater, experts on state infrastructure and funding told United States Senators Shelley Moore Capito, Joe Manchin and Tom Carper during a public hearing in Beckley on Thursday.

A declining population, aging work force, lack of technology and a lack of adequate infrastructure maps are among the challenges facing the state's water and public service districts (PSDs).

The hearing, which was held at Raleigh County Circuit Court in Judge Darl Poling's courtroom, is the first of two field hearings to be hosted by the U.S. Senate Environment and Public Works Committee.

The Senate in April overwhelmingly passed a $35 billion measure for improving drinking water and wastewater systems throughout the nation. The House of Representatives is now debating a $1.2 trillion bill addressing water systems as well as broadband, roads and bridges, and resiliency.

Manchin is not a member of the committee but serves as chairman of the Senate Energy and Natural Resources Committee. Manchin said that members of the Senate from both parties work well together but said disagreements among party lines receive more attention.

“We are facing critical challenges in the resilience of these systems, with many of our small and rural communities being disproportionately affected by the wide array of water infrastructure challenges,” Capito said.

“Clean water is an essential part of healthy lives, healthy economies and a healthy environment,” Carper, a native Beckleyan, said. “We have a moral responsibility to act to ensure that our water is clean and safe to drink, and we can do so in a way that powers our economy and creates good-paying American jobs.”

The witnesses offered insights and answers to questions related to water and PSD challenges facing rural West Virginia. Grinstead reported there are 835 public water systems in the state, with 434 being community water systems, which means they are operated by a town or another group.

"The U.S. Environmental Protection Agency (EPA) needs to recognize that small, local water supplies are operated and governed by people whose family drink the water every day," Grinstead said.

Witnesses suggested in other segments of the hearing that the EPA take less punitive measures when dealing with local systems that are trying to rid their water of contaminants.

Morgan reported that his agency, the West Virginia Infrastructure and Jobs Development Council, was formed in 1994 as a clearinghouse for funding programs. The U.S. Department of Agriculture, U.S. Environmental Development Association and Appalachian Regional Commission are among the agencies that contribute. The agency makes up a 20 percent match to state funding, which allows WVIJDC to use Facilities Sustainment Restoration and Modernization (FSRM) funds.

Applications for help with infrastructure upgrades to water and PSD systems are $400 million in each category, he reported.

"Engineers have put together applications, but they need funding to get them to construction," he said.

Morgan reported that construction of combined water systems that can be converted to stormwater systems is a necessity in controlling flooding in the state and preventing wastewater from flowing to rivers and streams.

He said aging infrastructure is a problem in the state, as it is in other parts of the country.

Unlike more arid states like Arizona and California, however, West Virginia has "an abundance" of water, Morgan reported.

"We've got an aging workforce, and we've got to address it," he said. "We've got to come up with more classes for operators, whether it's drinking water or wastewater.

"They've got to understand technology because there's tremendous savings associated with technology, whether it's mapping ... supervisory control and data acquisition or even just workforce management systems, keeping track of your assets."

"There's an apprehension of increasing rates, and we need to get rates that are equitable, across the United States," said Morgan. "If you have high rates, which exist in a lot of rural locations, then you can receive more grant money associated with the SFRM programs."

He added that when customers "get to two percent," which is considered the affordability level of drinking or waste water, the system qualifies for more grants.

According to the website moving.com, the average U.S. water bill is $72.93 for a family of four using 100 gallons of water per day, per person.

Roberts said that low customer rates are "a real issue."

"I realize that a lot of systems ... really try to keep rates low to really help their constituents and customers, but, in reality, it's dong more harm than good," Roberts said. "If you don't have the money you need to make improvements, to make repairs, to make expansions, we can't do that.

"Unfortunately, what happens is, maintenance is deferred, and then there's catastrophic failure."

Roberts said the rate issue was the "single most important thing to take away" and that minor rate adjustments keep track of inflation. In some places in southern West Virginia, he said, customers have not had a rate increase in 30 years. When a repair project is eventually required, the subsequent rate increase required to pay for the repair is a shock for many customers.

"It's like any other utility," said Roberts. "If you have periodic, incremental rate increases, you don't get the super shock."

Roberts said that many PSD and water systems are not adequately mapped or audited. As a result, it is more difficult for the systems to get grants, as they do not know the financial health of their water system.

Maps of existing infrastructure are also lacking, he added.

"It's really hard to manage and maintain something if you don't know where it is," he said. "It is a tremendous issue for these small systems."

He added that lack of an incoming workforce is another challenge, along with a general lack of technology. He said that, as an example, in-person meetings are more expensive than Zoom meetings, but some smaller districts are not using Zoom, an online meeting resource.

Many of the state's systems were placed in the 1970s with the expectation they would last 50 years. Other pieces of infrastructure in the state were laid in the 1930s.

"Some of the most intelligent people I've ever met are the operators of small municipal systems or small PSDs," Roberts said. "If it weren't for their ingenuity, a lot of these systems would've been defunct years ago.

Robert G. Forren, 82, of Parkersburg, WV, died Wednesday, October 13, 2021, at Elizabeth Care Center. He was born in Sinks Grove, WV, a son of the late John W. and Myrtle C. (Burns) Forren. He was a truck driver for Snowflake Quarry and Baptist by faith. He is survived by a brother, Donald W…