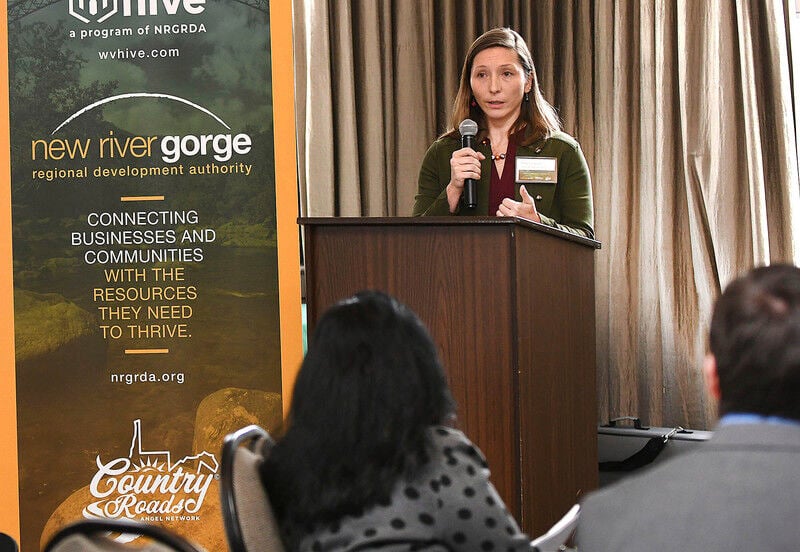 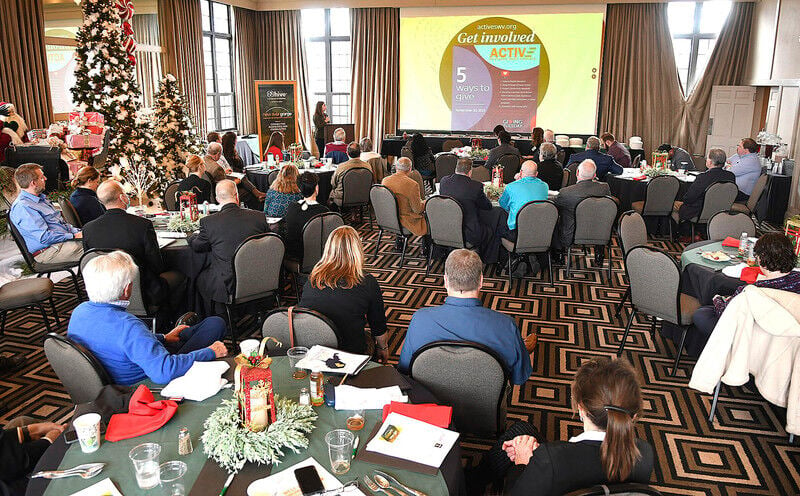 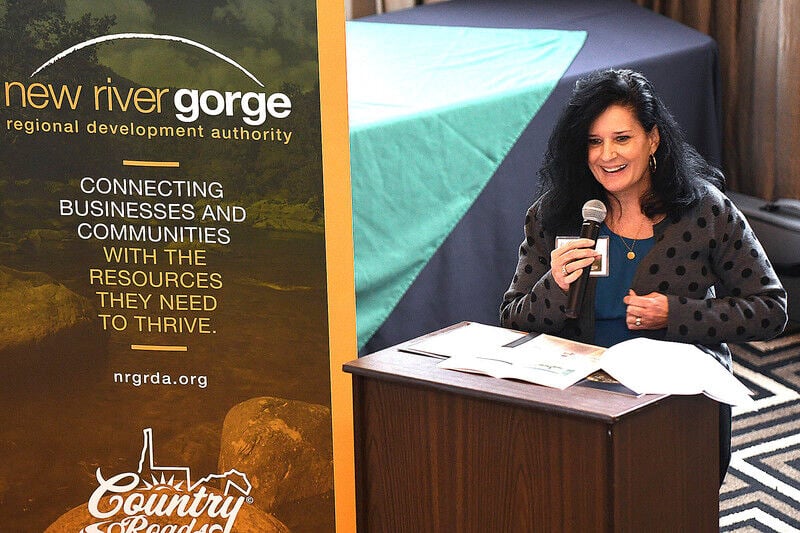 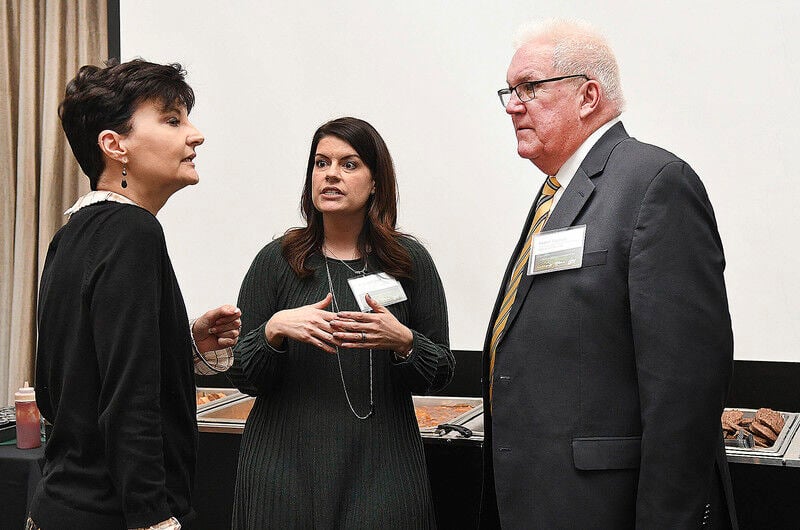 When it comes to the future of West Virginia, its success lies in its people.

From job opportunities to workforce participation to growing the population, the director of the Bureau of Business & Economic Research at West Virginia University said these are expected to trend downward in West Virginia.

During an economic summit Thursday at Historic Black Knight Municipal Park, John Deskins told a room full of businesspeople and community leaders that while these numbers seem grim, they are not set in stone.

While he spoke about the trends he’s seen in the economy for the entire state of West Virginia, he also spoke specifically about the New River Gorge region, which encompasses Raleigh, Fayette, Summers and Nicholas counties.

For the New River Gorge economy to improve, Deskins said investments need to be made in enticing workforce participation through education and health initiatives. He added that the region should funnel more resources into its outdoor economy as well as manufacturing related to chemicals, plastics and aerospace.

Serving as the perfect contrast to his presentation, Deskins was followed by speakers who are part of initiatives and programs either run by the New River Gorge Regional Development Authority or in partnership with it.

The mission of the NRGRDA is to initiate, facilitate and support the community and economic development efforts within the New River Gorge region.

Jina Belcher, executive director of the NRGRDA, said she found Deskins' presentation very interesting because all of his recommendations fit in line with projects and initiatives the NRGRDA is already working on.

“We feel really good about where we’re positioned as an organization to support those broader statewide goals that (Deskins) talked about,” she said. “We are starting to focus on more of the quality of life components than traditional economic development that authorities have done in the past.

“We’re focusing on workforce development programs with our community and technical colleges and WVU Tech in the region. We’re focusing on supporting housing developers to try to build out new workforce housing in the area and we’re focusing on child care for not only the remote worker but the traditional worker because we recognize that’s really a shortfall to recruitment.”

Belcher said one of NRGRDA’s most exciting projects is a 105-acre industrial park being developed as part of an aviation and aerospace industrial cluster at Raleigh County Memorial Airport.

“Because our aerospace industry focus is the most advanced, we hope to see a new aerospace manufacturing company next year so that we will be able to support job creation,” she said.

When it comes to bringing more people to the region as well as improving the quality of life for current residents, Belcher said the NRGRDA has a number of programs focused on health and enhancing businesses in the area.

She added that progress is also being made in growing the outdoor industry.

These programs were highlighted in presentations also given at the economic summit.

Melanie Seiler, the executive director of Active Southern West Virginia, touched on programs they offer that are focused on improving the health and quality of life of working West Virginians in the area.

She said they also have programs aimed toward kids as well as community members.

Seiler said that one aspect of a healthy lifestyle that the Covid pandemic has brought to light is the importance of social connections.

Every program Seiler touched on during her presentation involved investing time with participants in order to produce overall health benefits.

“We empower individuals to take control of their own health,” she said.

For its Kids Run Club, now in 30 elementary schools, Seiler said 75 percent of the kids participating have been able to encourage someone in their home to be more active.

Seiler said the volunteers who participate in this program also fill a mentorship gap present in lives of many children in the region caused by an absent parent or guardian due to the opioid epidemic.

Another way Active Southern WV is encouraging healthy lifestyle choices is through its Community Captain program, which trains individuals to lead physical activity programs in their community for free.

Active Southern WV also offers a Workplace Wellness program, to encourage healthy behaviors at the workplace, and a Bike/Walk program.

Seiler said the future of Active Southern WV lies in expanding these programs in order to offer more resources to the people of southern West Virginia. Seiler said they would also like to grow their network of volunteers.

“People want outdoor recreation and they want to be physically active,” she said. “They want to find things for their kids to do, they want to be surrounded by healthy friends and family and so we’ve positioned ourselves to provide those resources across southern West Virginia and soon to be across the state.”

Judy Moore, executive director of WV Hive, said since it was formed in 2017, they've served more than 300 businesses, been instrumental in the startup of 49 new businesses and helped to create 161.5 new jobs. She added that they’ve also helped businesses raise more than $4 million in capital.

As part of its model, Moore said they customize the experience for every business that applies for their help.

“We understand that no two businesses have the same challenges and so we work to create what they need – the path to put them on success,” she said.

Moore said WV Hive is there to provide support to business at any stage, whether it’s just a rough sketch of an idea written down on a napkin or something that’s further along and is nearly operational.

She added they also work with businesses that have experienced rapid growth and need help handling all the new business heading their way as well as businesses experiencing a decline that may need help integrating technology into their business model.

“Our mission is to connect entrepreneurs to the resources that they need in order to be successful,” Moore said.

While the plan for each business is customized to meet its needs, Moore said all the businesses received one-on-one support from a WV Hive business advisor.

She said they also offer workshops as well as more in-depth training courses for new and existing businesses.

Another program offered through WV Hive is the Community of Healing recovery-to-work program, which Moore said is all about giving people struggling with drug addiction a second chance.

“The whole mission behind this program is to shatter the perception that community investment into recovery programs comes at the expense of helping economic development,” she said.

She said they do this by working with businesses on hiring people in recovery.

A list of all the services offered by WV Hive is available on its website, wvhive.com, which is also where people can apply for assistance.

Through the work done by WV Hive, Moore said that they realized that businesses not only need help planning and executing their business idea but some also need funding to get their business off the ground.

To address this need, NRGRDA created the County Road Angel Network (CRAN) in 2019. It is also led by Moore as the managing director.

She added that CRAN is the only certified angel investment network in the state and serves the entire state.

Moore said CRAN currently has 21 investors that play a direct role in choosing the businesses they invest in.

She described the process as similar to “Shark Tank.”

As part of the process businesses apply for funding from CRAN and then a select number are chosen to pitch their business to potential investors during CRAN meetings.

To date, Moore said CRAN has reviewed over 30 investment opportunities and made three investments totaling $410,000, which has been used by the business owners to leverage an additional $2 million.

Those investment have gone to Iconic Air and Endolumik, Inc. of Morgantown and Mountain Steer Meat Company in White Sulphur Springs.

In addition to funds, Moore said investors also serve as mentors to these businesses and provide mentorship to the business that are not chosen to receive funds.

Moore said the goal is to attract more than 40 investors to CRAN to aid West Virginia businesses.