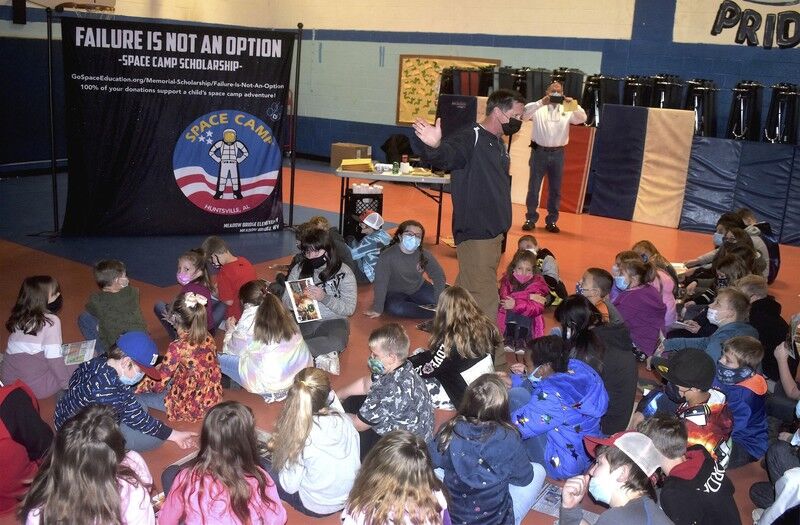 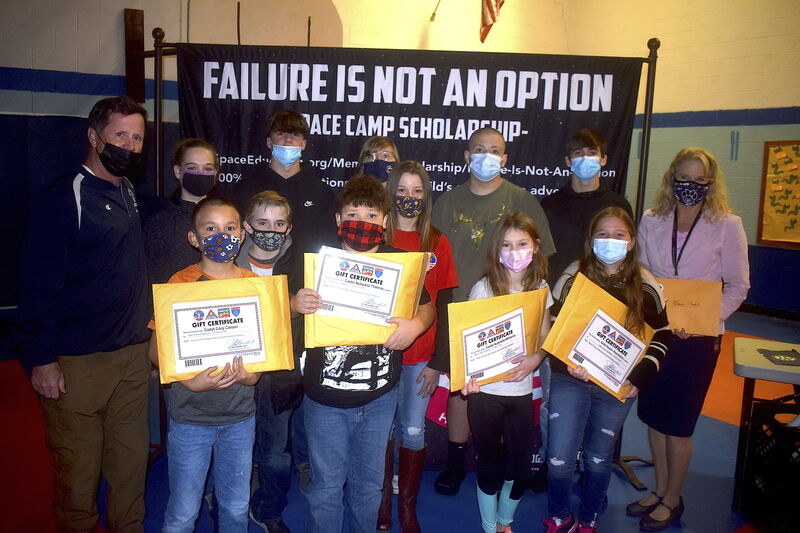 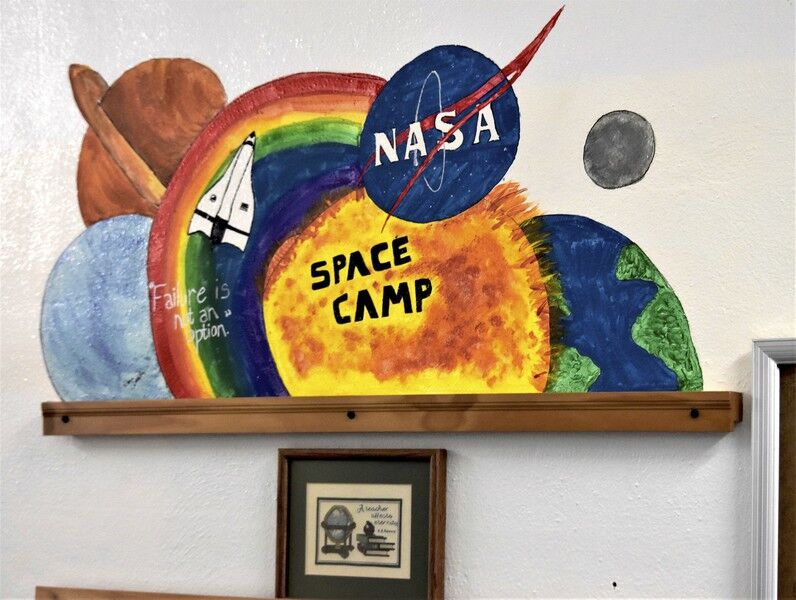 A wall in the hallway at Meadow Bridge Elementary displays artwork in honor of the scholarship program. 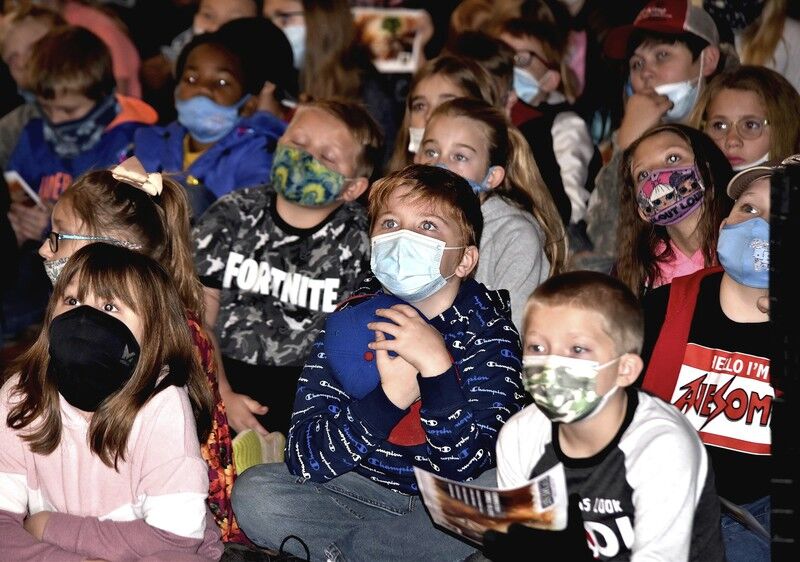 Bailey McKinney, front left, Tucker Mullins, holding hat in center, and Justin Poole, front right, were among the MBES students listening intently during a remote discussion with Miranda Odem, an engineer who is deputy in charge at the U.S. Army Developmental Command (DEVCOM) at the Redstone Arsenal in Huntsville, Ala. 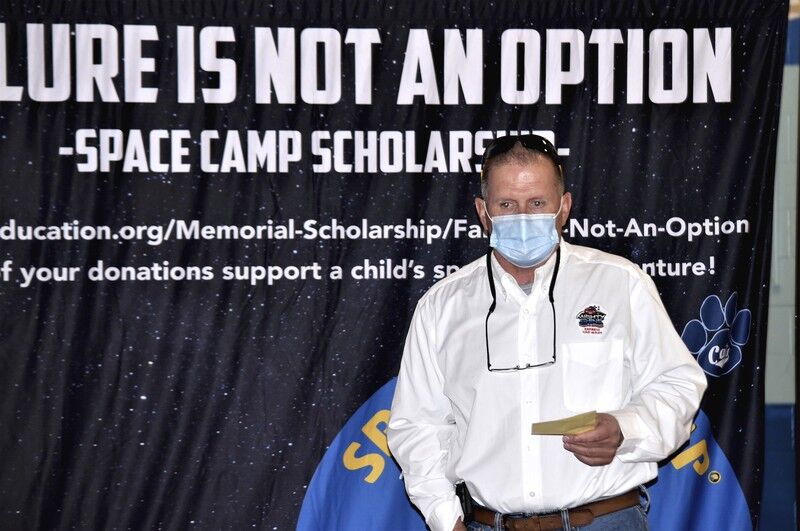 Wallace Dunford stresses to students they should choose something they love to do. 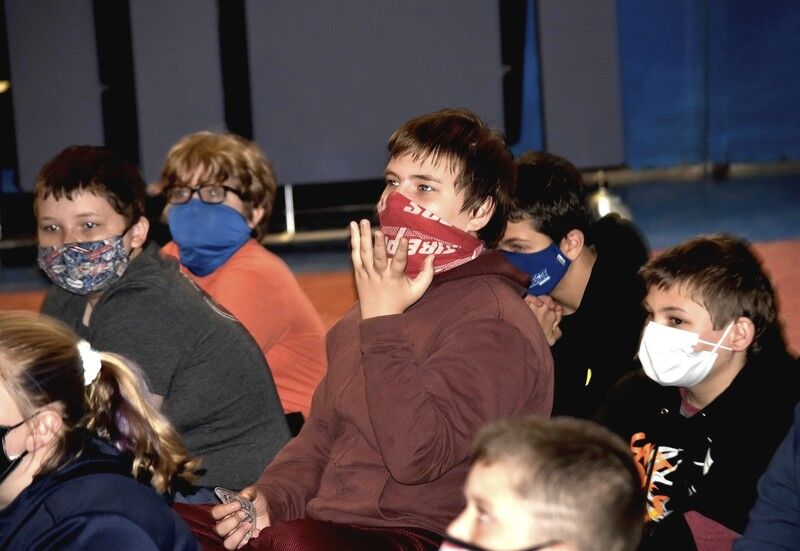 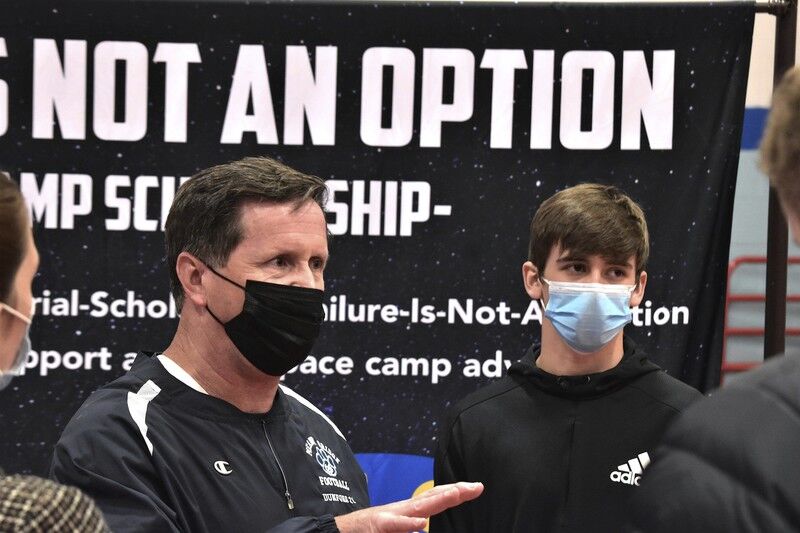 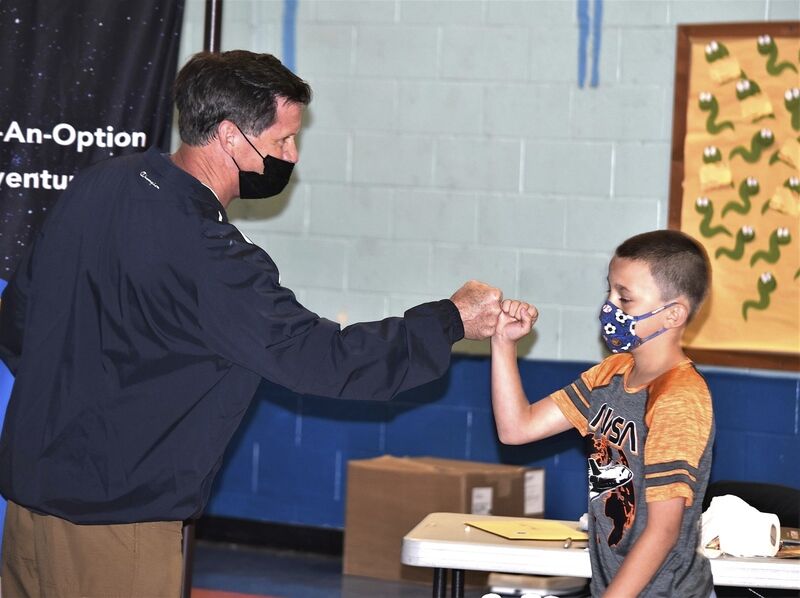 A wall in the hallway at Meadow Bridge Elementary displays artwork in honor of the scholarship program.

Bailey McKinney, front left, Tucker Mullins, holding hat in center, and Justin Poole, front right, were among the MBES students listening intently during a remote discussion with Miranda Odem, an engineer who is deputy in charge at the U.S. Army Developmental Command (DEVCOM) at the Redstone Arsenal in Huntsville, Ala.

Wallace Dunford stresses to students they should choose something they love to do.

MEADOW BRIDGE — Regardless of their background or ambitions, Meadow Bridge Elementary School students heard sound advice Nov. 19 they can carry with them through life.

It might even take them to space if that is their goal.

During a special ceremony at which "Failure is Not An Option Space Camp Scholarship Fund" participants were announced for the summer of 2022, MBES students were told that character, perseverance and, above all, hard work will be crucial as they advance through their school years and begin to develop career goals and plans.

Meadow Bridge High School graduate Russell Dunford and his brother, Wallace Dunford, visited MBES on Friday, Nov. 19, to talk with students and staff. The Dunford family is among those who help sponsor the annual scholarships that enable local students to spend a week at Space Camp and learn numerous details about aviation and space exploration. At the conclusion of the ceremony, two finalists and two alternates were announced as the school's representatives at Space Camp this coming summer in Huntsville, Ala. Fifth-graders attending the week-long event will be Cory Cooper and Aubrielle Williams, while alternates are Nehemiah Thomas and Kayelin Mullins.

Educator Kami Walker will also attend next summer, as for the first time this year, a staff member from Meadow Bridge will also participate in Space Camp.

"For my brother and I, we both know what education does for you," explained Russell Dunford. "We know the doors it will open and the doors it can close.

"Really, all we're trying to do is to teach the kids, one thing, the value of education, and two, by planting seeds that maybe they go one day and do STEM (science, technology, engineering or math fields of study) or engineering or whatever they do. Like my brother said, we don't care what you do. Just whatever you do, realize that failure is not an option. You may hit a wall and you just back up and say, 'OK, if I can't go through the wall, then let me find a window.'

"Just keep moving forward to that objective that you have and follow that passion that's in your heart."

"For he and I, it's about tenacity, it's about trying to live to what you want to be and helping these kids," added Russell Dunford, who is currently a director for the U.S. Army Corps of Engineers, performing data analytics. "Like I said, I'd rather help a kid now in the fifth grade than to see them have to deal with some type of rehab ... because they went down the wrong path."

Dunford, a retired U.S. Army lieutenant colonel, said he annually anticipates the presentation to honor the MBES students, as well as taking time to visit family for Thanksgiving. "This is the best Christmas gift I can get," he said. "It's more about giving than receiving. I've been very blessed.

"This year, we were able also to sponsor an educator to go down, and that was the first time we've been able to do that," Dunford explained. "Hopefully, we can do that every year moving forward."

During the event, the Dunfords advised students to thank and appreciate the efforts of individuals such as Walker and teachers Janet Fox and Lanna Duncan.

Wallace Dunford, an entrepreneur, urged students to follow their dreams. "If you can find whatever it is that you (love) to do, I guarantee you will never work another day in your life," he said.

"It's good for us to have the opportunity to participate in something like this," said Meadow Bridge Elementary Principal Mark Gladwell. "Hopefully it will show our students it doesn't matter where you're from, you're capable of anything. Whatever your goals are, we're encouraging you to pursue them."

During his presentation, Russell Dunford pointed out individuals such as Katherine Coleman Johnson, Edward O. Buckbee, Chuck Yeager and Homer Hickam who achieved success in the aviation field.

Also during the ceremony Nov. 19, MBES students and staff heard a remote presentation from Miranda Odem, an engineer who is deputy in charge at the U.S. Army Developmental Command (DEVCOM) at the Redstone Arsenal in Huntsville, Ala. Odem discussed challenges in the engineering profession, the importance of study in STEM (science, technology, engineering or math) fields and other issues.

"The sky is the limit with what you can do with math and science," Odem told the students. She also took several questions from students.

Meadow Bridge High junior Conner Mullins, the first MBES student to attend Space Camp, said Friday the camp exposed him to many opportunities and gave him a boost for his future. "When I went down there, I focused a lot on aviation," he said, calling it "great reference for my future."

Mullins also is glad to see the program growing. "It's expanded and that's great for the community."

For his part, Cooper said he's appreciative of the chance to be a Space Camp cadet that Mullins once embraced. "I'm super happy to the point I'm shaking really bad," said Cooper, who hopes to be an engineer when he gets older.

Walker, who works in the administration side of things at MBES, will attend because a school teacher couldn't work the week into their summer schedule for 2022. "I was a little bit apprehensive at first since I don't have a teaching degree; I'm in administration," said Walker, who used to work for the Air Force in a civilian capacity.

She wants to enjoy the experience, then bring back knowledge to share it with students at the school. "My dad always told me there's nothing you can't do, and I just want to pass that on. I'm over the moon is all I can say."