Charleston — Advocates filed a class action lawsuit against West Virginia officials Tuesday, alleging that while the state is quick to terminate parental rights, it doesn't have adequate foster families and adoptive homes in which to place those children. Often, children sleep in hotel rooms or in DHHR offices.

In turn, the state's child welfare system is putting about 7,000 foster children at heightened risk of someday experiencing homelessness, mental health problems, incarceration and addiction, according to the lawsuit, which advocates said they planned to file at 12:01 a.m. Tuesday in the Huntington Division of the Southern District of West Virginia.

A Better Childhood, a national nonprofit advocacy group that wages court battles on behalf of children; Disability Rights of West Virginia, a federally funded nonprofit; and the West Virginia law firm Shaffer and Shaffer allege that West Virginia's Department of Health and Human Resources has "repeatedly failed the children they are charged with protecting."

"We're not seeking money damages," said Marcia Robinson Lowry, executive director of A Better Childhood. "We're seeking for things to change going forward – that the government must take care of these kids."

The lawsuit names Gov. Jim Justice, DHHR Cabinet Secretary Bill Crouch, DHHR Deputy Secretary Jeremiah Samples, and DHHR Commissioner of the Bureau for Children and Families Linda Watts as defendants. Plaintiffs filed the lawsuit "on behalf of all children who are now, or will be, in the custody of DHHR."

DHHR officials were not aware of the lawsuit Monday.

DHHR officials have said that West Virginia has about 7,000 kids in state custody, and that the number has increased by 67 percent since 2013. During that time, the number increased nationally by 11 percent, according to DHHR.

"The drug epidemic was not the root of the problem but rather toppled an already fractured system," the lawsuit states. "The public statements display a lack of accountability but nonetheless, clearly acknowledge that the system is in fact in crisis."

The lawsuit says that recruiting foster families is difficult in the state because "DHHR caseworkers routinely exclude foster parents from MDT meetings, verbally threaten to remove children from foster parents’ care when they engage in any sort of advocacy that challenges the caseworkers’ orders, are difficult to contact in crisis situations (such as when consent is needed for medical or behavioral health care), and often speak disrespectfully towards foster parents." MDT meetings are multi-disciplinary team meetings, where case workers, prosecuting attorneys, parents, lawyers and others meet to address familial problems that led to abuse and neglect.

Some foster parents are also selective about the children they will accept.

Meanwhile, West Virginia is quick to terminate parental rights, frequently within months after the child is placed with a foster family, according to the lawsuit.

Meanwhile, the number of adoptions in the state has not kept up, according to the lawsuit, "leading to more children becoming legal orphans, frequently left in institutional settings."

The lawsuit states that frequent moves while in foster care are associated with maltreatment, poorer educational outcomes and increased mental health issues.

Adolescent children are at higher risk of substance abuse, juvenile arrests and failing out of school, according to the lawsuit.

One 11-year-old girl, with Down syndrome, was removed from her parents after they were arrested for habitually failing to send her to school. She was placed with an aunt, then in two foster homes. Now, state officials plan to send her to The Potomac Center in Romney, according to the lawsuit.

The lawsuit says that in 2017, "formal allegations were filed against the facility claiming that, among other abuses, the disabled residents did not receive the services the facility claimed to offer and they failed to hire, train and supervise their employees adequately.

"Separately, as a result of an ongoing criminal investigation, state police have claimed that Potomac Center staff abused 12 children, ages seven to 17, subjecting them to physical, sexual, and psychological abuse, including inhumane and degrading treatment by some employees of the Potomac Center, Inc. facility," the lawsuit states.

Four senior administrators were charged with failing to report the abuse.

In another case, a boy was sent from living with his abusive mother to his abusive aunt's, according to the lawsuit. He suffers from post-traumatic stress disorder. 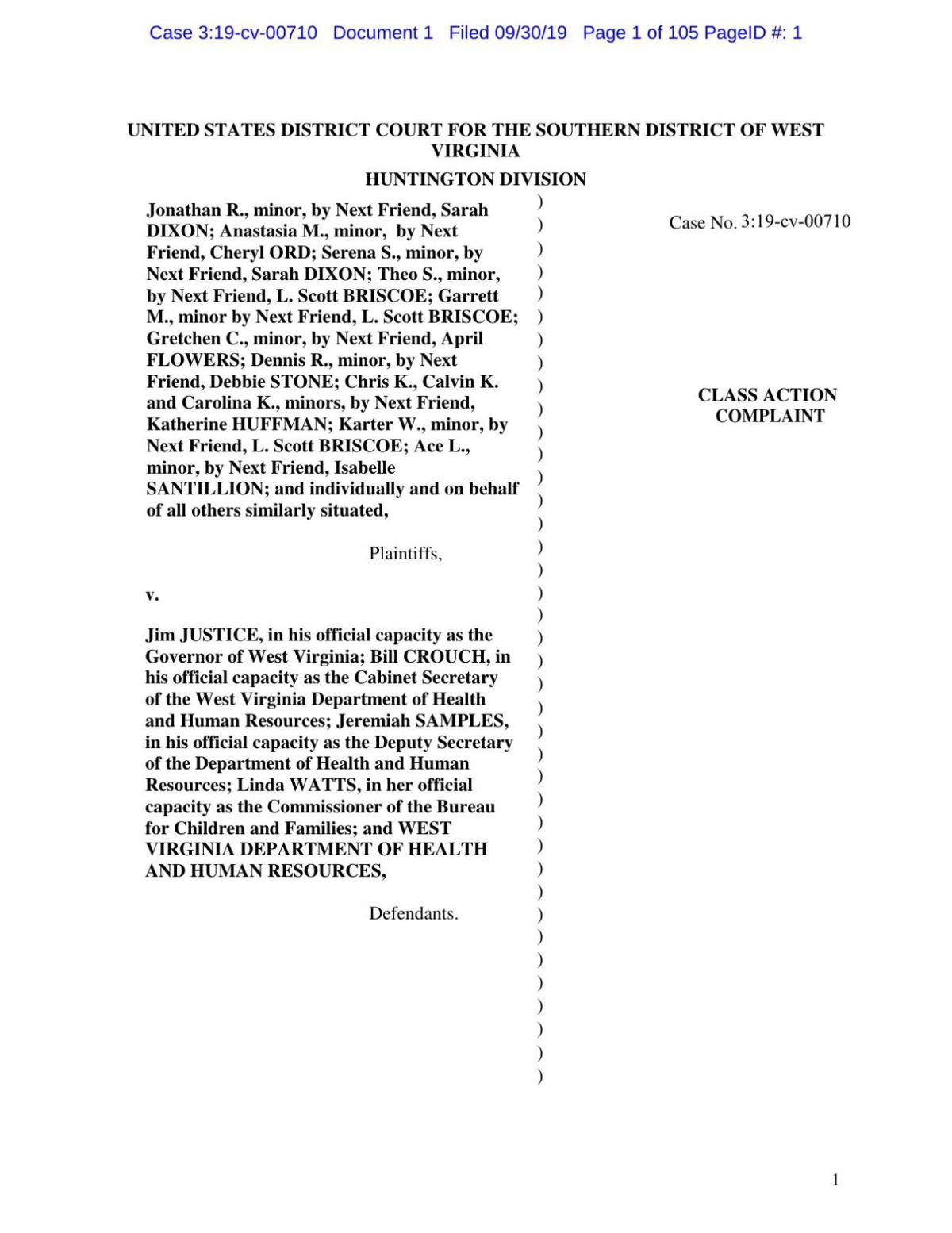 Plaintiffs say that due to the increase in foster children, state officials are placing more children in kinship care, meaning in the care of a relative. About half are in kinship care.

But according to the lawsuit, those families don't receive the $600 monthly payment that certified families do, and DHHR officials dissuade them from becoming certified. Because they aren't certified, their homes are not subject to the same safety regulations, the lawsuit says.

"Upon information and belief, DHHR regularly discourages kinship caregivers from seeking foster home certification by either failing to inform them of their option to become certified, or by 'warning' them that they will likely not meet the certification requirements and may instead risk losing the foster children if they seek certification," the lawsuit states.

"Those are bad numbers," said Robinson Lowry. "They're very bad numbers and we really do think something needs to be done and probably nothing's going to be done unless this lawsuit does it."

Plaintiffs are also suing about over-reliance on out-of-state facilities. The lawsuit states that DHHR is spending approximately $41,181,775 per year to place children in out-of-state congregate care facilities "that are too frequently the subject of investigations that confirm rampant sexual, physical, and emotional abuse at the hands of employees who are undertrained and not properly screened."

In 2015, the Department of Justice sent then-Gov. Earl Ray Tomblin a letter, stating that West Virginia was keeping too many kids with serious mental health problems far from their homes, in residential facilities and psychiatric hospitals, often out of state. That violated a U.S. Supreme Court decision that found segregation of people with disabilities is discrimination.

In May of this year, state and federal officials announced they had reached a memorandum of understanding, and that West Virginia officials had agreed to expand services meant to keep those children at home and in care in their own communities.

According to the agreement, West Virginia has agreed to begin screening children on Medicaid, those who are in the care of the state, including foster children, and those who reside in juvenile justice facilities, to determine whether the new services could be of help. State officials would then offer new services covered by Medicaid, including a mobile crisis team, and in-home visits by mental health care providers.

Plaintiffs argue that a goal, of a 25 percent reduction of the June 2015 number of children in residential placement by 2022, is too low, and that the MOU is "self-enforcing" with "little to no oversight."

They want DHHR to contract with an outside entity to conduct a needs assessment of the state's foster care system. They also want DHHR to develop a plan for ensuring CPS workers don't handle more than 15 cases, that DHHR keeps written plans for each child with the goal of finding that child a permanent home or be reunited with his or her family, that kinship families are safe and properly trained, and to increase the availability of community-based mental health care for children.

The lawsuit also states that DHHR doesn't employ enough child welfare workers, that it fails to "adequately" screen their applicants for criminal backgrounds or drug use, and experiences high turn-over. Plaintiffs say that a 2013 audit recommended exit interviews to reduce turn-over, but DHHR ignored that recommendation.

In January 2019, 213 positions were vacant, amounting to a 45 percent vacancy rate among caseworkers, according to the lawsuit.

The lawsuit states that while The Child Welfare League of America, a coalition of private and public agencies that develops child welfare policies, recommends CPS workers shouldn't handle more than 12 to 15 clients at a time, it "is not uncommon" for West Virginia CPS workers to handle 50 cases.

Inadequate staffing results in "less time to interact with children, families, and service providers or to provide meaningful and appropriate case plans, necessary services, and timely casework and decision-making around issues such as permanency planning," the lawsuit states.

Case workers also fail to prepare foster children for adult life, according to the lawsuit, putting them at higher risk of premature pregnancy and incarceration.

"Rather, caseworkers attempt to plan for the transition out of foster care when youth are on the verge of aging out, sometimes as late as weeks before a teen’s 18th birthday," the lawsuit states. "Without any plan in place, young people are being dropped off at homeless shelters."