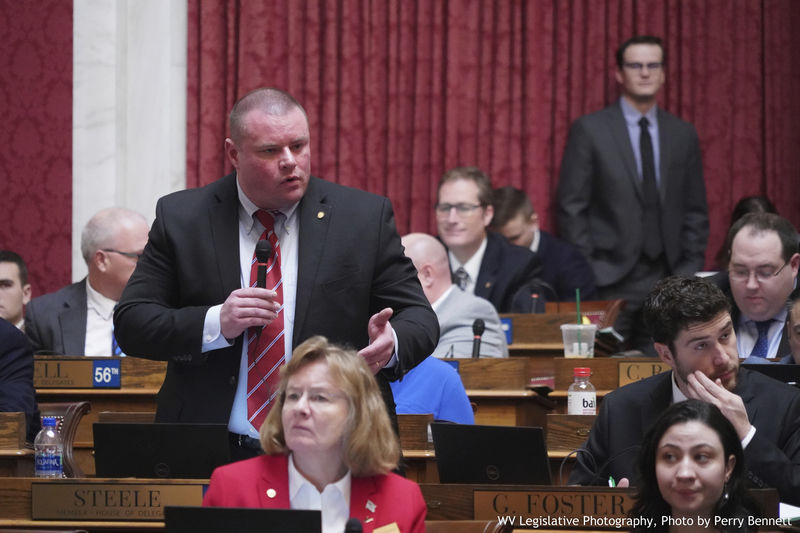 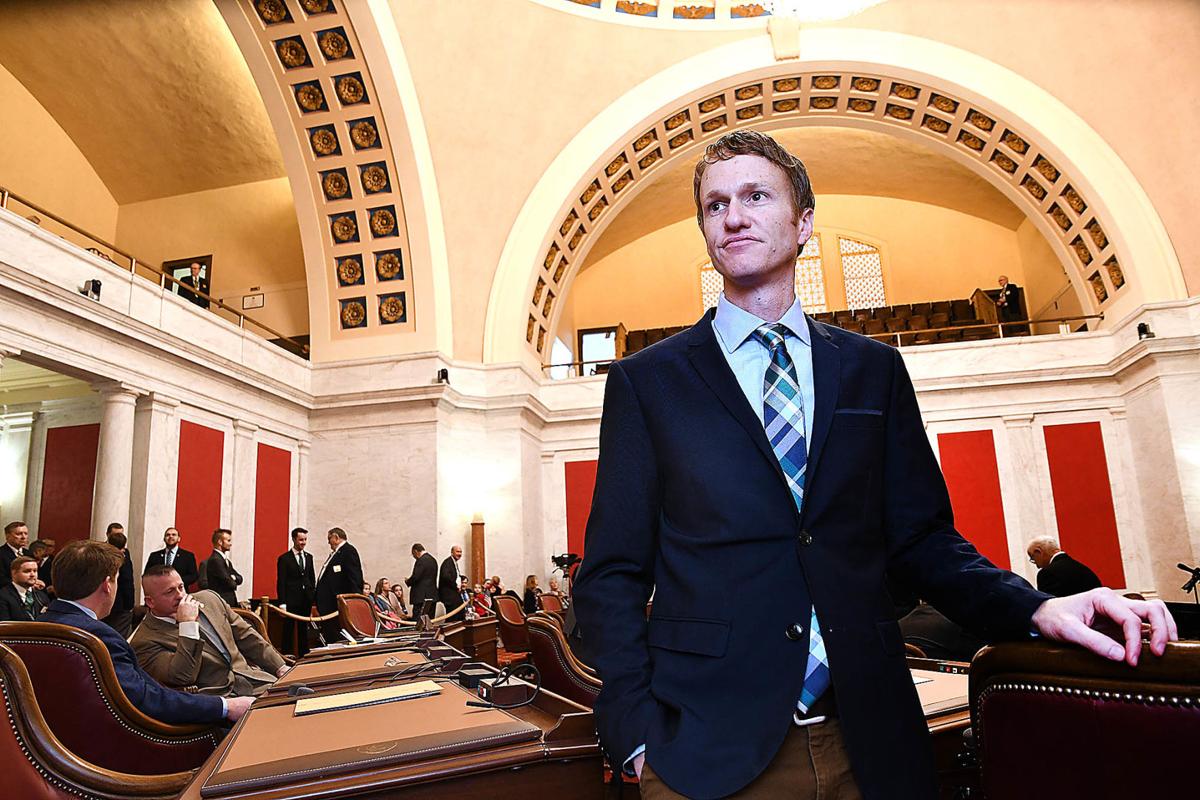 Senator Stephen Baldwin in the senate chambers during the first day of the 2019 legislative session at the State Capitol in Charleston. (Rick Barbero/The Register-Herald)

Senator Stephen Baldwin in the senate chambers during the first day of the 2019 legislative session at the State Capitol in Charleston. (Rick Barbero/The Register-Herald)

Charleston – In the state with the highest per capita rate of children in state custody in the country, a group of West Virginia lawmakers voted this week to remove a provision of state law that requires LGBTQ children in protective care to have equal access to foster and adoptive families.

LGBTQ youth are already at higher risk of being placed in state custody and less likely to find stable homes after they enter the child welfare system.

Mary Boo, executive director of the North American Council on Adoptable Children, said that "if something happened to us, it's what we'd want for our kids, is another family or relative, someone to care for them."

"We know that that's good for kids to have those connections and to have somebody who's there for them for life," she said. "And when you are discriminating against prospective foster or adoptive parents, you're taking people out of the pool – people who could be families for those kids. And really we need to only be looking at 'Can these people meet the child's needs?' "

During a meeting of the West Virginia Legislature's rule-making review committee meeting Wednesday, lawmakers were discussing an area of state law that lists requirements for agencies that place foster children.

While the Legislature passes laws, state agencies, such as the West Virginia Department of Health and Human Resources, propose rules on how to implement or interpret those laws.

Currently, the law states that child placement agencies must provide foster children and their biological families equal access to services, regardless of race, religion, ethnicity, gender, disability or sexual orientation.

One agency, the Family Focused Treatment Association, had submitted a public comment, suggesting that lawmakers also add to the law that agencies could not deny or delay a child's placement with a foster family based on the child's sexual orientation, and that adults couldn't be denied the chance to become foster parents based on sexual orientation.

Lawmakers not only denied that request, but also removed existing protections for LGBTQ foster children.

Delegate Geoff Foster, R-Putnam and chairman of the committee, proposed changing the rule to say that foster children and parents shall have equal access to services if they fall into classes already protected by state and federal law.

There are no protections for LGBTQ foster children or parents under state law. In November, the Trump administration also proposed reversing an Obama-era rule protecting LGBTQ people from discrimination in programs funded by the federal Department of Health and Human Services, which would include foster care agencies.

Delegate Barbara Fleischauer, D-Monongalia and a member of the committee, said that West Virginia children are "desperately in need of good homes.”

Two advocacy groups filed a lawsuit against the state in October, alleging that West Virginia doesn't have adequate foster families and adoptive homes in which to place foster children. Sometimes children sleep in hotel rooms or in DHHR offices.

DHHR officials have said that West Virginia has about 7,000 kids in state custody, and that the number has increased by 67 percent since 2013. During that time, the number increased nationally by 11 percent, according to DHHR.

“I think it’s wrong," Fleischauer said. "I think it’s cruel. I think everybody deserves a home and a family and if you’re saying that you're going to allow these agencies, that you’re going to permit them to discriminate on these grounds, then I just want to raise a very strong objection to that.”

Delegate Brandon Steele, R-Raleigh, sided with Foster, saying he did not "consider it our role here today to legislate policy through rules."

Later in the discussion, Fleischauer noted that by stripping existing protections for LGBTQ youth from the law, the committee would be "removing a protection that is currently in our regulation and has been voted on by the Legislature."

Testifying before the committee Wednesday, DHHR Deputy Secretary Jeremiah Samples said that youth in care of the state are more likely to be LGBTQ than those in the general population.

"There’s also a wealth of data that indicates that children that are LGBT are much more likely to commit suicide and have other negative consequences in life," he said, "and so I believe there was just a general recognition by the department and the child providers, the child placement providers, that we needed to add additional protections for this population.”

While questioning April Robertson, DHHR general counsel, Steele said, "I know we're speaking a lot about discriminating against children based on their sexual orientation, which is a farce, but we’re actually talking about the prospective parent as well?”

Steele also said he was concerned about faith-based organizations that may not want to place a child with same-sex parents.

Samples told him that he didn't believe any child placement agencies in the state want to deny same-sex couples that option.

Senator Stephen Baldwin, D-Greenbrier, argued against Foster's proposal, saying that protections for LGBTQ youth in foster care have already been in state code since 2001.

"We heard from DHHR that these child welfare agencies will have higher standards than our rule does for protecting vulnerable children if we adopt this modification," he said.

Next, the rule goes to the rest of the Legislature for final approval. The 2020 legislative session begins next month.

"We want to scrutinize anyone who wants to be a foster parent, make sure that they're suitable to be a foster parent, they don't have any criminal history, their home is safe, all of those pieces are very important, but in terms of your gender, your sexual orientation, your race, all of those pieces, we don't gain anything by limiting ourselves within those categories, those demographics," she said. "We are desperately seeking foster parents so...to not approve based on one of those demographic factors just doesn't help us move that needle in terms of increasing the number of foster parents that we have."

She also wasn't aware of any child placement agencies in West Virginia that want to deny services to LGBTQ youth or prospective foster parents.

"I do know of kids in West Virginia who are themselves in the LGBTQ community and have struggled to find the right placement, especially when they end up getting placed with families who have different values and don't agree with them or they don't feel comfortable being out of the closet," she said.

"When folks are talking about these rules, they tend to be talking about it from the perspective of the agency," she said. "We hear that the agency has to, that agencies are being asked to violate their religious principles," she said. "Let's talk about the kids first, and talk about the kids' needs, and the agencies should be doing this work on behalf of meeting the kids' needs. And we really need to switch that focus, because it's gotten a little skewed in this administration."

Her group submitted a public comment noting that certain groups of youth, including LGBTQ youth, "currently experience increased placement instability, are more likely to be placed in congregate care, and are more likely to age out of the system. They are most in need of a large pool of qualified, loving prospective parents."

The comment also said that LGBTQ youth "report experiencing poor treatment within the system at twice the rate of their peers.

According to Boo, at least ten states have introduced laws allowing child placement agencies to discriminate against LGBTQ people based on religious beliefs. According to the American Civil Liberties Union, at least eight states have passed laws allowing state-contracted child welfare agencies to exclude prospective families based on agencies’ religious beliefs.