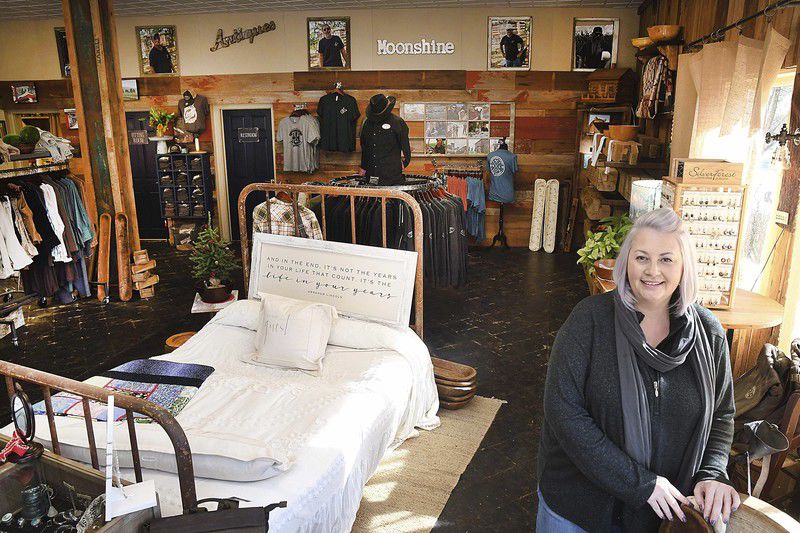 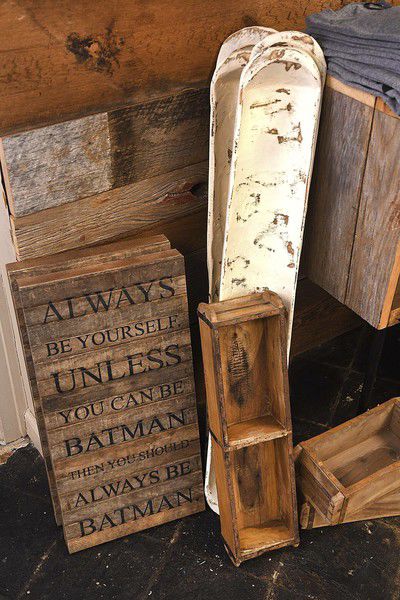 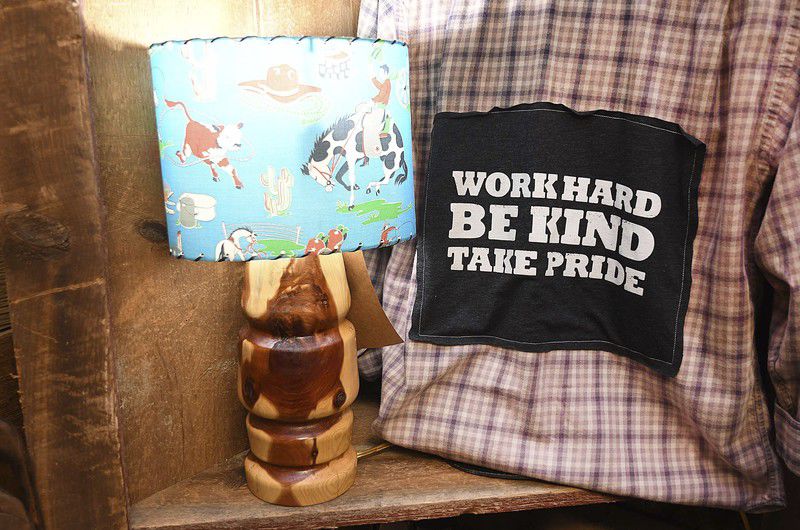 Shelton said the store houses goods from individuals from West Virginia and from across the globe who share the Barnwood Living mindset.Items displayed at Barnwood Living on 574 West Main Street in White Sulphur Springs.(Rick Barbero/The Register-Herald) 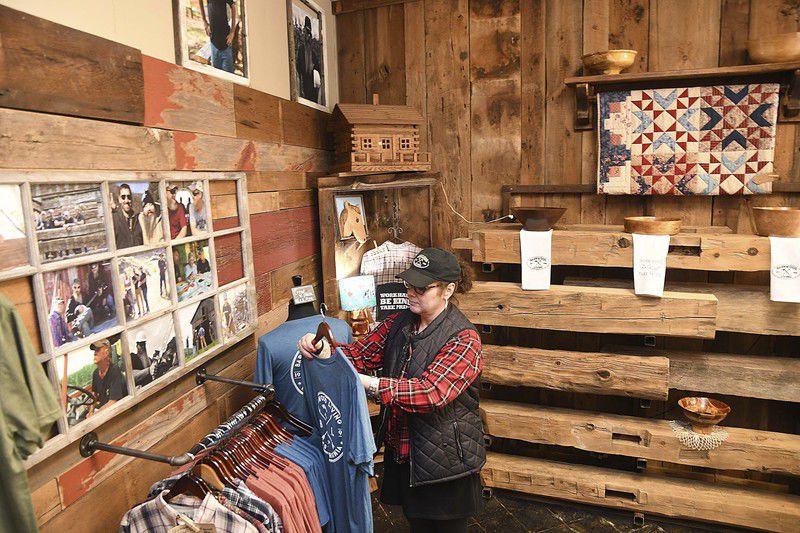 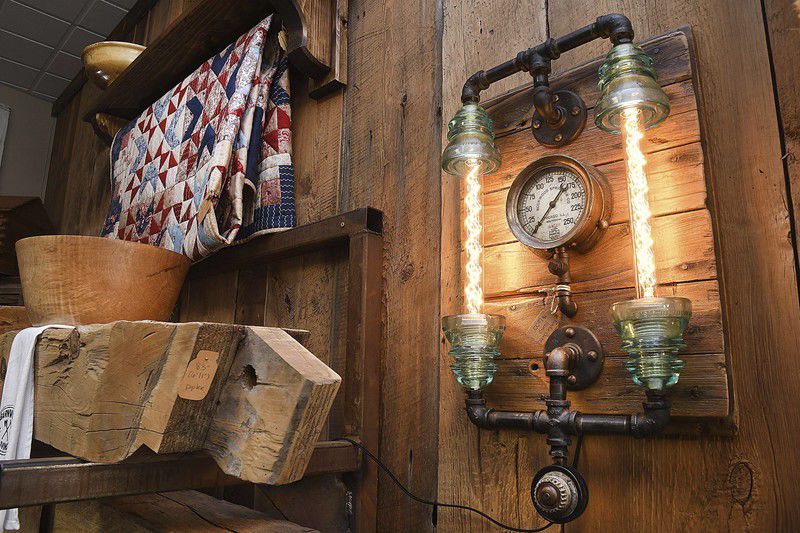 This light was made from salvage material by Eddie Booze, of Renick. The Barnwood Living crew also has items for sale in the store., at Barnwood Living on 574 West Main Street in White Sulphur Springs.(Rick Barbero/The Register-Herald) 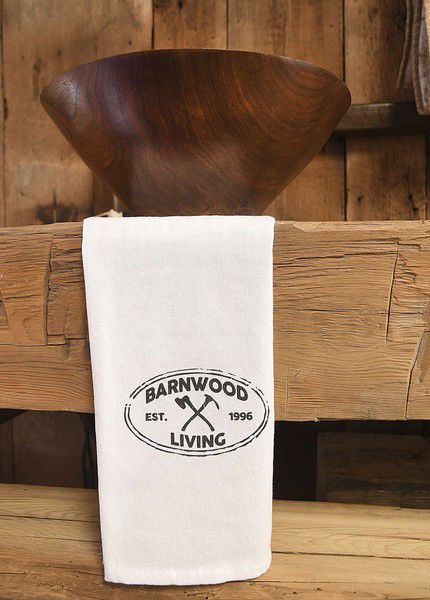 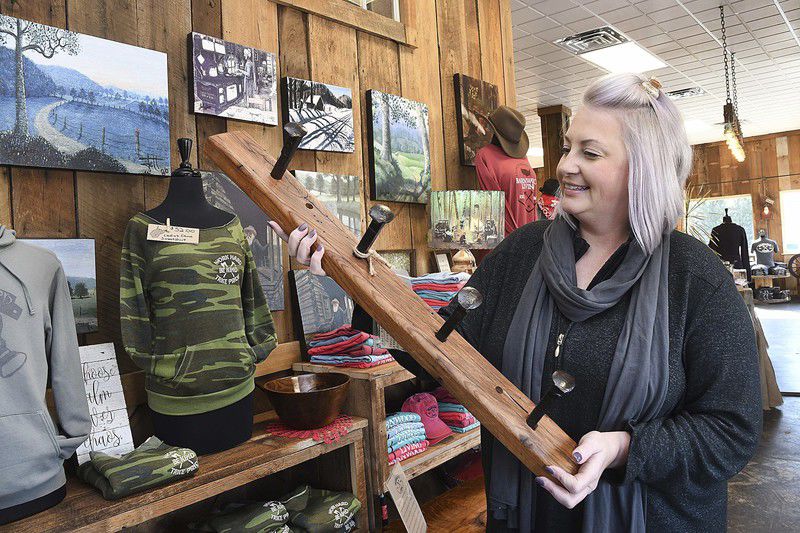 Shelton said the store houses goods from individuals from West Virginia and from across the globe who share the Barnwood Living mindset.Items displayed at Barnwood Living on 574 West Main Street in White Sulphur Springs.(Rick Barbero/The Register-Herald)

This light was made from salvage material by Eddie Booze, of Renick. The Barnwood Living crew also has items for sale in the store., at Barnwood Living on 574 West Main Street in White Sulphur Springs.(Rick Barbero/The Register-Herald)

Nine years ago, the world was introduced to a number of quirky, eccentric and hardworking individuals from Greenbrier County by way of a television show called “Barnwood Builders.”

The show follows a group of men from a White Sulphur Springs business called Barnwood Living, led by owner Mark Bowe, as they go through the tedious and challenging task of recycling and refurbishing wood from 1800s cabins and timber frame barns in order for them to later be used in modern builds.

Much to the surprise of the men and women involved, the show, which will air its ninth season in March on the DIY Network, was a tremendous hit attracting fans from across the globe.

The popularity of the show also carved the way for a storefront on Main Street in White Sulphur Springs, which not only sells T-shirts inspired by the show but also offers up a variety of handmade products including wood carvings and paintings crafted by the men on the show and serves as a makeshift showroom to demonstrate to visitors what a barn or timber frame would have looked like in the 1800s.

Katherine Shelton, director of operations at Barnwood Living, said those involved are thrilled that the popularity of the show has led to so many new avenues for the business, but more than that, they are grateful that the show and the business have helped attract more interest in not just White Sulphur Springs and Greenbrier County but also West Virginia.

What is now known as Barnwood Living was initially started in 1996 by Bowe and his father, who would travel the countryside looking for 1800s cabins and barns to refurbish.

This new passion would eventually lead Bowe to five other like-minded and self-proclaimed hillbillies who now make up the backbone of his business and the show, which first aired in 2013.

Those core crew members are Johnny Jett, a Vietnam veteran from Fleming County, Kentucky, who is also an accomplished artist; Sherman Thompson, a farmer and tobacco grower; Tim Rose, a Virginian who worked for 10 years as an Air Force aircraft mechanic; Graham Ferguson, of Summers County; and the newest member of the crew, Alex Webb, an Army veteran and Monroe County native.

Helping to keep this crew of men in line is Shelton, who considers her actual job title to be the hillbilly wrangler.

“The guys are like a bunch of 12-year-old kids,” she said lovingly and with a laugh. “They’re responsible enough — you can leave them on their own — but they don’t always come up with the best ideas on their own. They need adult supervision from time to time but they are the main reason we are all here.”

Prior to the opening of the downtown retail space, which will celebrate its third anniversary on Feb. 21, Shelton said she mostly did office work and would serve as the contact for clients who were looking to buy or sell structures.

She now serves as one of the unofficial faces of the company, greeting each customer who walks through the doors of Barnwood Living with a warm smile and a friendly “howdedo?”

Having been with the company for nine years, Shelton said she could not have imagined that the show would ever lead to these types of opportunities.

“This retail space came to be a place of landing,” she says. “Sort of like a home base for our business as well as for folks who are interested or just curious in what we do for a living.”

“Not everybody can build, not everybody can step into that, but millions of people watch the show and are fascinated by what the guys do so we created almost like a retail space and show room combined so folks can see what an 1800 barn might have been clad in or how a timber frame attaches together.”

Pointing to the interior walls of the shop, Shelton explained that one wall is made from the exterior boards of an 1800s Pennsylvania barn that was at one point painted red, though the color has faded over time.

On another wall, the interior boards from a similar barn are displayed vertically giving off a wood paneling effect.

Also featured in the store is a replica of what a timber frame would have looked like complete with uprights and bents or cross frames.

Bowe said the shop serves as yet another way for people to see what they do up close.

“In this era of e-commerce, it is nice to have a retail location where you can have a tactile experience,” he said. “Place your hands on a beam that is 400 years old, hold an ax similar to our forefathers, and of course be greeted at the door with a warm smile like you just visited an old friend.”

Shelton said roughly 85 percent of people who walk through their doors are fans of the show while the remaining 15 percent happen upon the store by chance.

Shelton said the goal is to make every visitor feel like “they’re home and they’ve come to visit a friend.”

She added that they also aim to have the other products they sell give off that same vibe from the comfy clothing to the crafty keychains.

“Most everything we carry here in the store is made in West Virginia or by a local or regional artist,” she said. “We’ve branched out as we’ve met people along the way and the idea has kinda come about now that we’re more of a lifestyle brand. We’re still doing cabins and barns and still doing these fun things but what we want to show and epitomize what the Barnwood Living lifestyle is about. It’s about keeping up with our past, recycling and upcycling things to be used now.”

Contributors of this Barnwood Living lifestyle brand include a man in Fayetteville who converts wine and beer bottles into all-natural wax and essential oil candles that are capped with pieces of reclaimed wood, an 86-year-old man from Pocahontas County who uses wormy chestnut wood and railroad spikes to craft shelves and coat hooks and a man from Greenbrier County who uses the wood from fallen trees to create tables and countertops.

Shelton said the store also houses goods from individuals from across the globe who share the same Barnwood Living mindset.

“We have some of the crew’s favorite things here,” she says, pointing out tomahawks and knives forged in the United Kingdom and jewelry from a silversmith in Texas. “We have leather workings from a company in Asheville, N.C., that employs all folks on the autism spectrum from their community.”

In addition to these items, Shelton said the crew from “Barnwood Builders” also contributes items to be sold at the store.

“They are all good at lots of things,” she said. “They are kind of like renaissance guys; they would be the guys you’d call up when you want help putting on a roof, but they have all of these great skills as far as the old ways of building.”

Shelton said the store sells a number of prints of paintings made by Jett that depict landscapes from around where he grew up in Kentucky as well as scenic log cabins and 1800s towns.

Another popular item in the store, especially for fans of the show, is the T-shirts, featuring everything from the business’ logo to the beloved “boneyard,” which is a title that came as a result of the show and describes the salvage yard where all the reclaimed wood or “bones” of a structure are stored.

As a result of the show, which is broadcast worldwide, Shelton said they have had guests from the UK, Australia and Trinidad just to name a few.

“We have folks who want to come see West Virginia just because of (the show),” she said. “They come to see us, they make us a destination and then they go and visit other places around the area as well.”

Past and future episodes of “Barnwood Builders” can be streamed online on DIYNetwork.com as well as through iTunes and Amazon Prime for a fee.

For more information about Barnwood Living or to view its online store go to www.barnwoodliving.com.