Charleston – A year ago, the state's Department of Environmental Protection proposed new limits on the amount of certain pollutants that cause human health effects, including cancer, permitted in West Virginia rivers and streams.

During a public meeting Tuesday, Laura Cooper, assistant director of the DEP's Division of Water and Waste Management, described plans to start the process of updating water quality standards once again.

Rebecca McPhail, president of the West Virginia Manufacturers Association, was listening by phone.

Six months ago, she asked a group of West Virginia lawmakers, the legislative rule-making review committee, to hold off on implementing new water quality standards until state-specific information could be gathered – namely, West Virginians' higher body weight and lower drinking water consumption. Those are two of the factors the federal Environmental Protection Agency uses when coming up with the standards, based on the theory that heavier bodies can handle more pollutants, and that people who drink less water are less exposed to the pollutants.

A public records request showed that state Sen. Glenn Jeffries, D-Putnam, who has not responded to several requests for an interview, worked with the manufacturers to give them until at least 2021 before they'd have to comply. 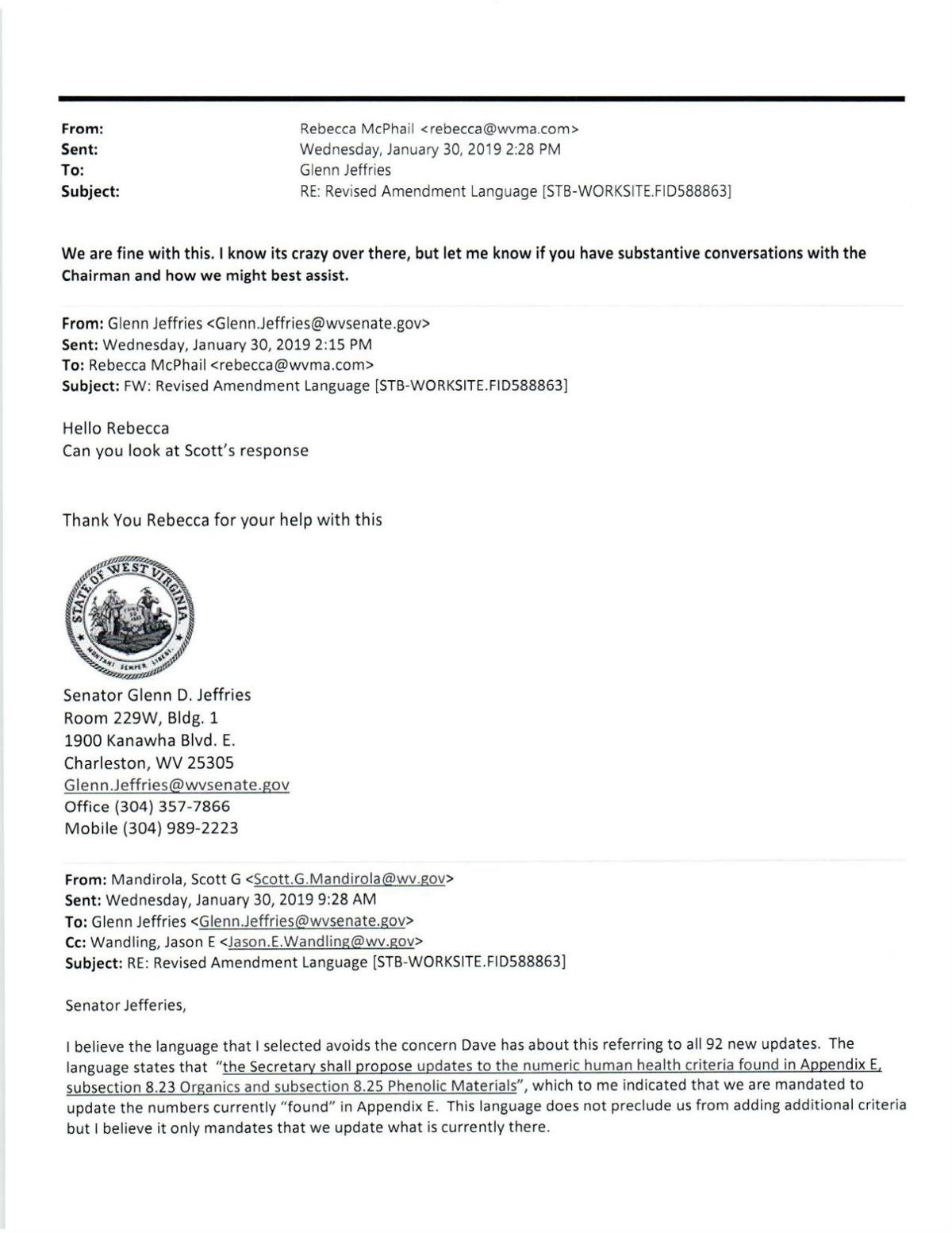 McPhail's argument later went viral on the Internet, but only after the legislative session had ended and West Virginia lawmakers had already given the Manufacturers Association until 2020 to study whether the EPA's recommendations for water quality standards should be applicable to West Virginia.

Tuesday, Cooper said she couldn't find a West Virginia study of body weight that could be used.

She told the group some about how the standards are devised.

She said that when the DEP proposed to change the water quality standards last year, it kept the standards mainly the same as EPA recommendations, except the DEP factored in lower fish consumption rates in West Virginia, based on a 2008 survey.

She said how more than a year ago, in March of 2018, the DEP held a public meeting on proposed revisions, and in May of 2018, provided public notice of their proposed water quality standard updates. In July of 2018, Cooper said, the DEP submitted its proposal to the Legislature for review.

She then explained how the Legislature passed the rule with a new section, giving manufacturers until 2021. The West Virginia Coal Association had also opposed updating the standards.

Cooper told them how another public meeting is planned for August or September, and for November, and that the DEP is accepting suggestions until Oct. 2019.

"We have what we proposed in July," she said, "but now we're starting fresh."

CHARLESTON — The West Virginia House of Delegates on Tuesday passed a rules bill that includes a provision opposed by advocates for clean water.

Robbie Wayne Collins, 54, of Fairdale, went home to be with the Lord on January 13, 2022. Service 1p.m. Wednesday, January 19, at Bolt Church of God, Bolt, with visitation one hour prior. Arrangements by Handley Funeral Home, Danville.