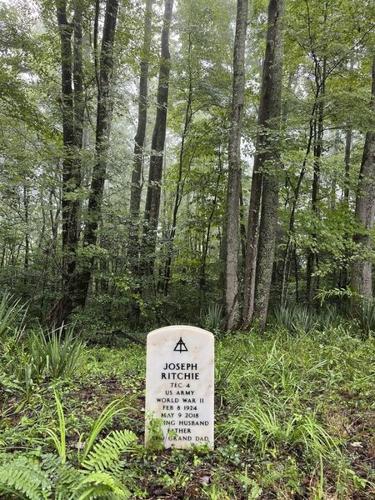 Steve Keenan/The Register-HeraldAiding with upkeep of a Black cemetery on Tank Hill is one of Peña’s suggestions. 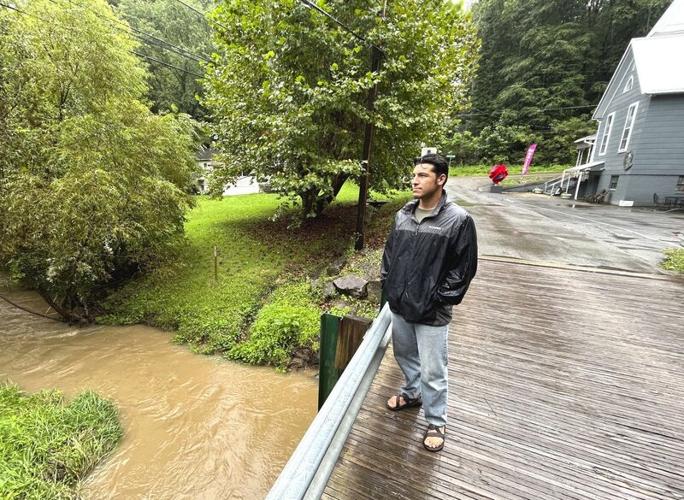 Steve Keenan/The Register-HeraldFayetteville town councilman Gabriel Peña looks out over House Branch, a stream which feeds into Wolf Creek and eventually reaches the New River Gorge National Park and Preserve. Under Fayetteville’s inclusion in the Recreation Economy for Rural Communities (RERC) program, Peña and other town officials and community representatives, as well as outdoor recreation industry representatives, hope to bolster Fayetteville, including a possible hiking/biking trail that could reach the national park as well as create a safer situation for residents of the Tank Hill portion of town. 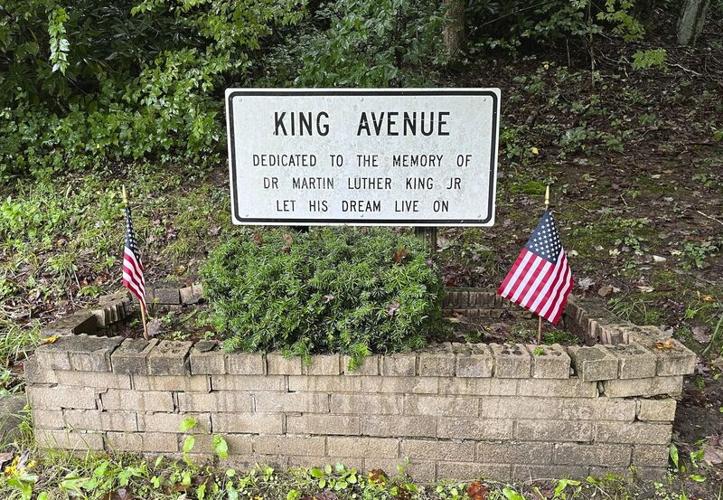 Steve Keenan/The Register-HeraldSafer access to King Avenue and Tank Hill is among the priorities among consideration in Fayetteville’s participation in the Recreation Economy for Rural Communities (RERC) program. 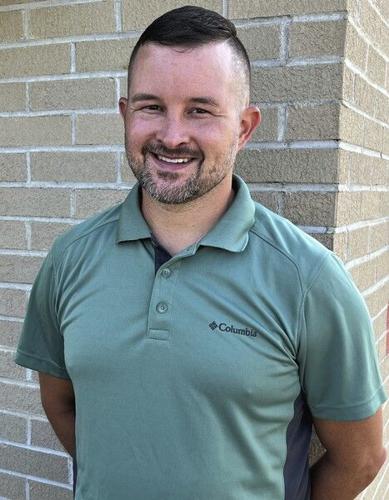 Steve Keenan/The Register-HeraldAiding with upkeep of a Black cemetery on Tank Hill is one of Peña’s suggestions.

Steve Keenan/The Register-HeraldFayetteville town councilman Gabriel Peña looks out over House Branch, a stream which feeds into Wolf Creek and eventually reaches the New River Gorge National Park and Preserve. Under Fayetteville’s inclusion in the Recreation Economy for Rural Communities (RERC) program, Peña and other town officials and community representatives, as well as outdoor recreation industry representatives, hope to bolster Fayetteville, including a possible hiking/biking trail that could reach the national park as well as create a safer situation for residents of the Tank Hill portion of town.

Steve Keenan/The Register-HeraldSafer access to King Avenue and Tank Hill is among the priorities among consideration in Fayetteville’s participation in the Recreation Economy for Rural Communities (RERC) program.

As people in the region continue to seek out positive, perhaps innovative ways to adapt to a changing landscape created by the 2020 designation of the New River Gorge National Park and Preserve, Fayetteville is poised to be at the centerpiece of many local efforts.

The town, which is the Fayette County seat and is home to many tourism-related organizations and businesses, was recently revealed as the only West Virginia community among 25 selected nationally for a prestigious federal interagency partnership to support outdoor recreation initiatives.

On Aug. 17, the U.S. Environmental Protection Agency, U.S. Department of Agriculture Forest Service, Appalachian Regional Commission, and Northern Border Regional Commission announced the selection of 25 small and rural communities from across the country to identify strategies to grow their outdoor recreation economies and revitalize Main Streets via the Recreation Economy for Rural Communities (RERC) program.

According to an earlier press release, the Town of Fayetteville and its partners propose to plan for and leverage the increased visitation to the region that has resulted from the establishment of the New River Gorge National Park and Preserve nearby, engage in inclusive community tourism development and planning, increase local access to outdoor recreation, and cultivate a culture of wellness in the community.

“Technical assistance provided by this program creates great potential to position the gateway community of Fayetteville to capitalize on the newly designated New River Gorge National Park and Preserve. In order to identify more opportunities to tie Fayetteville’s residential neighborhoods and downtown corridors into national park lands a collaborative and inclusive planning approach will be required,” Davis wrote in his submission. “We recognize the benefits a strong recreational economy can have on the health and well-being of our community. It is in this spirit that we lend our support to this funding proposal.”

In the interagency announcement, federal and non-profit leaders, including ARC Federal Co-Chair Gayle Manchin, stressed the importance and benefits of supporting outdoor recreation. “The travel and tourism industry in Appalachia is among the region’s fastest-growing employment sectors, generating more than $4.5 billion in local tax revenue and employing more than 577,000 Appalachians,” Manchin said when the announcement was made.

Communities were chosen after a comprehensive review process from a pool of more than 100 applicants. A federal planning team will work with each community over the next few months, with a two-day facilitated community workshop as the focal point. Participants will work together to develop strategies and an action plan to grow their local outdoor recreation economies.

“They will have a consultant who works with these communities on a planning grant,” explained Fayetteville Town Superintendent Matt Diederich. “We have a steering committee made up of community members, and they work with the steering committee.”

The upcoming two-day workshop will focus on “what we’re planning on doing and what the committee is doing to formulate a plan to accomplish that process,” he said. Diederich said it could be a year-long process.

Federal officials will give guidance once the plan is completed to steer town officials and the steering committee toward possible funding channels, Diederich noted. “So, it’s a planning grant that leads to additional funding in the end, and it gives you that leg up since you’ve already been through the process.”

The superintendent feels participation in the RERC initiative will be a very positive step for Fayetteville. “Absolutely, it’s a unique opportunity,” he said.

Diederich said that Bath County, Va., was among the communities involved in the first round of the initiative. “Early on, we got to hear from Bath County officials.”

Fayetteville is in the process of putting a steering committee of between six and 12 individuals in place, Diederich said in late August. He has already been in contact with the consultants for guidance in the process. The community workshop will more than likely occur “sometime late winter, early spring.”

When Fayetteville town councilman Gabriel Peña envisioned participation in the initiative, he focused on the Tank Hill area in general, an “underserved population in town,” said Diederich. “He wants to figure out a safe but yet accessible way to access town,” Diederich said, noting that a two-way state road extends up the hill without a place for a sidewalk. “How do we extend it on through sidewalks, through trails, through bike lanes?” Diederich asked.

While Tank Hill will be a main focus, the RERC collaboration will include input on plans or improvements in other areas of Fayetteville, Diederich said. “Our community is small enough that we can focus on that but still get a total view of the community.”

Being cognizant of the RERC program, as well as pursuing non-related projects in town such as a pending survey on town park needs, a possible sidewalk addition and a project involving earmark funding, Diederich said, “We’re doing a lot of planning in Fayetteville right now.”

The town recently hired a town planner, who will devise a master plan in the coming months.

On a recent day, Peña took a reporter on a brief tour of the Tank Hill area, beginning where House Branch feeds into Wolf Creek and the New River National Park and Preserve. It is in the shadow of King Avenue, which leads up to Tank Hill.

“There’s a bridge that goes over Wolf Creek, and it’s at the confluence,” he explained. “It’s a beautiful area.

“I’ve had a chance to walk along this creek. It’s really beautiful along the creek valley, and it feeds right to the national park.

A potential hiking and biking trail in that area would give locals and visitors the opportunity to explore an area that is about 1 1/2 miles in length, he said.

“I think there has been some right-of-way work done by the Town of Fayetteville,” he said. “There are a few other parcels of property here we would have to make sure we have access to.” One he mentioned is a dilapidated structure with only a chimney still standing.

If a project comes to fruition, it will be a boost to the town in avenues other than recreation. For example, Peña said, a trailhead could be located somewhere in the immediate area that would “allow folks to use that trail but also be able to walk into town and alleviate some of the parking issues that we have.”

Another possibility if a trail is built is that it could also create a walking path up to Tank Hill.

“Putting a sidewalk on King Avenue (the narrow, main roadway at Tank Hill) really doesn’t seem very feasible to me, understanding the amount of money that would be required to build that infrastructure up,” said Peña. “It seems like this proposed trail, if there was a spur off it that went up to Tank Hill, that might create the kind of walkability that would make for safer pedestrian access to Tank Hill. A lot of folks walk up and down Tank Hill, and I think it’s really unsafe.” Two or three blind curves on that portion of Tank Hill are problematic, he said. It presents a “really unsafe proposition,” for example, for individuals riding bicycles or walking in certain parts of the area, said Peña.

Another goal of his is to help provide upkeep of a Black cemetery which has been the scene of some dumping in recent years.

Nearly 100 residents live in the Tank Hill section, which is in Fayetteville limits.

The funding for the technical assistance grant will be about $25,000. The EPA Office of Smart Growth will hire a contractor to help the town develop an actionable plan, Peña said. He based his suggestions on the Tank Hill proposal on work he helped do with the River Cities Trails in western Fayette County, work he performed when he was the county resource coordinator.

“We essentially are following the same game plan that we followed with the River Cities Trail (an integrated trail system) in Montgomery and Smithers. I think a lot of community members had envisioned a trail that followed along the Kanawha River from Montgomery into Smithers as not only a recreational amenity but also as a reason to get people to stop in those communities that needed more foot traffic to help them rebuild their local economies and revitalize their downtown, but we needed that vision that the community members had, a concrete plan and something that is well thought out.

“I applied as the resource coordinator for the Healthy Places for Healthy People technical assistance through the EPA, and we were awarded it, and it gave us an opportunity to map the assets in those communities, bring stakeholders to the table and let them articulate their vision for that trail and for their community.”

In the RERC initiative, participating communities will undertake a variety of revitalization projects which include: building new trail systems, improving access and walkability along Main Streets, increasing access to outdoor activities for all residents and visitors, strengthening outdoor recreation businesses, adapting to the climate impacts that affect coastal resources, wildfires and winter recreation opportunities, cleaning up and repurposing vacant buildings, and creating new parks and recreation amenities.