Charleston – Continuing to base their reasoning on a study that does not say 50/50 custody of children is best, West Virginia lawmakers in the House of Delegates on Wednesday passed a bill that states judges should assume 50/50 custody is ideal, unless certain other conditions are met.

House Bill 4648, sponsored by Del. Geoff Foster, R-Putnam, states that unless parents come to another agreement, courts should assume that shared legal and physical custody, including equal time spent with both parents, is best, unless one party can prove that other factors, such as child abuse, neglect, or abandonment, or domestic violence, should be considered.

Other exceptions include if a parent has "persistently violated, interfered with, impaired or impeded the rights of a parent or a child with respect to the exercise of shared or sole custodial authority," made fraudulent reports of domestic violence or child abuse, is currently incarcerated, has been convicted of one of several types of violent crimes, or has an "adjudicated substance abuse addiction."

The bill also removes a provision of current state code stating that temporary parenting plans should consider "performance by each parent during the last twelve months of the parenting functions relating to the daily needs of the child."

Del. Shawn Fluharty Fluharty, D-Ohio, attempted to amend that provision back into the bill Tuesday, but was unsuccessful. Wednesday, he argued that making prior care-taking "irrelevant" means lawmakers weren't considering the best interest of the child.

Under questioning from Fluharty, Foster said that one other state, Kentucky, has passed a similar law. Foster added that "it's fairly new scientific research that proves this is in the best interest of the child."

The bill states that its rationale for "co-equal shared custody" is "the findings of leading published and peer-reviewed social science studies." Foster has acknowledged that statement refers to an analysis of studies conducted by Richard Warshak and signed by more than 100 contributors.

While that analysis stated that studies are "favorable to parenting plans that more evenly balance children's time between two homes" and that both parents should "maximize the time they spend with their children," it does not state anywhere that lawmakers should set in law a 50/50 default child custody template.

In contrast, Warshak and other researchers wrote that "We use the term shared parenting time to designate divisions of time in which each parent is responsible for the child's care at least 35 percent of the time" and "These findings do not necessarily translate into a preference for parenting plans that divide young children's time exactly evenly between homes."

Warshak and other researchers also stated: "Young children's interests benefit when two adequate parents follow a parenting plan that provides their children with balanced and meaningful contact with each parent while avoiding a template that calls for a specific division of time imposed on all families," and that arrangements should be "flexibly tailored to the developmental needs, temperament, and changing individual circumstances of the children concerned." 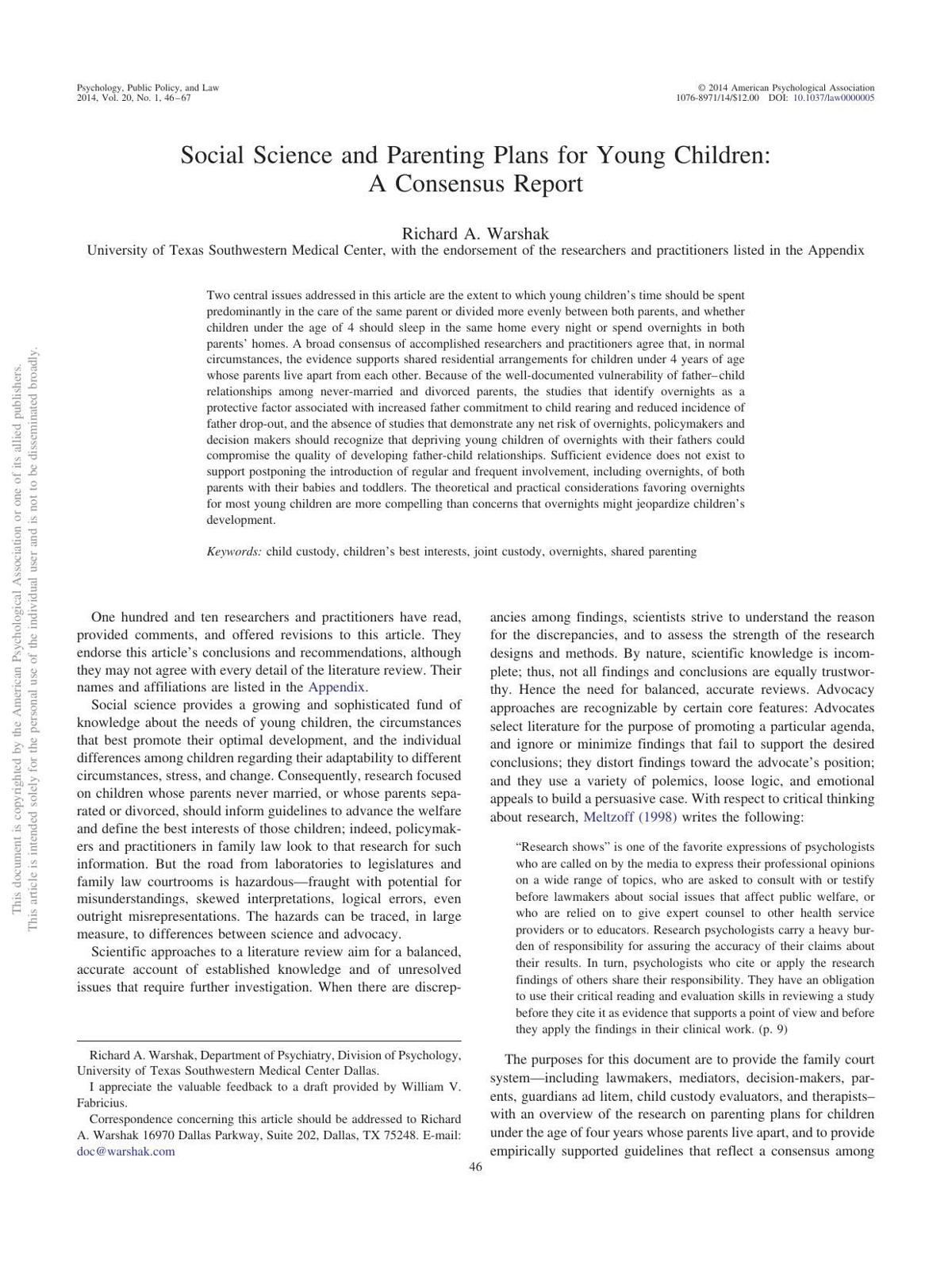 On the floor Wednesday, Del. Marshall Wilson, an Independent representing Berkeley County and a bill co-sponsor, said he wanted to "straighten out some of the misconceptions that have been presented here today."

He said that the 50/50 custody "presumption" is simply a "new starting line for the race," but that other factors, such as child safety and happiness, would still be considered.

He didn't address his comments Tuesday, that considering prior year performance by parents could lead to him telling his children, if he was in a custody battle, that their deployed mother had "abandoned them."

Members of the Republican majority argued that children do better with more time with both parents. None acknowledged that the Warshak study does not call for a 50/50 template.

Advocates for the prevention of child abuse and for victims of domestic violence oppose the bill.

On the floor Wednesday, Del. Barbara Fleischauer, D- Monongalia, noted that the bill is opposed by the West Virginia Coalition Against Domestic Violence.

She said that "50/50 custody is not always what’s best for the child and that's where our focus should be, not on fairness to parents."

Joyce Yedlosky, team coordinator for the West Virginia Coalition Against Domestic Violence added, in an interview Wednesday, that perpetrators of domestic violence may use the bill to open up old cases as a tactic to once again control the victim, and victims may lack the evidence, especially years later, to prove their case.

"It can also disrupt stability that children may have finally received after the trauma of being exposed to the domestic violence," she said.

He said he believed  "the reason for that is they're encouraging parents to work it out beforehand (and) that they understand they'll start from 50/50 anyway."

Yedlosky said she had heard an advocate for the bill present that claim in the House Committee on Senior, Children and Family Issues, but she added that the presenter had not said the drop was proven to be related to the bill, that Kentucky's domestic violence coalition had been unable to verify the claim, and that her understanding was Kentucky's law is substantially different from West Virginia's bill.

"I find it hard to believe that victims of domestic violence who are terrified of their offender are going to say because of a bill 'OK, I guess I better work it out,'" she said.