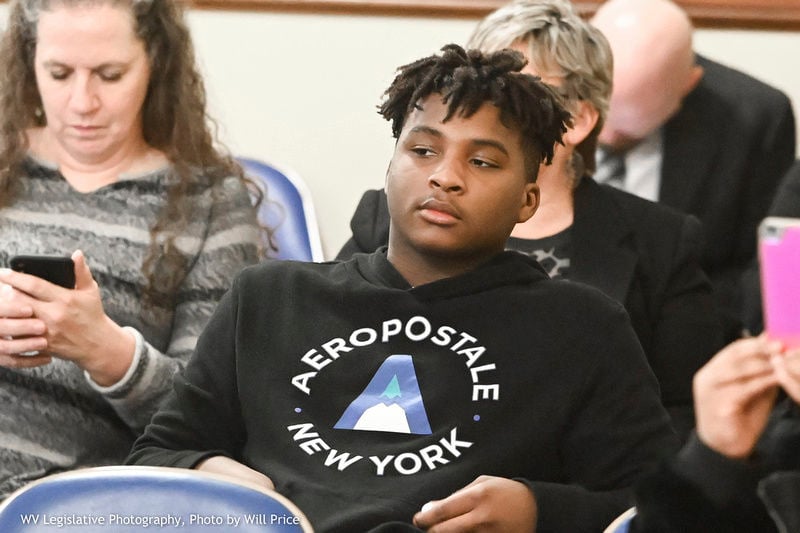 Will Price/WV Legislative PhotographyMatthew Moore said his dreadlocks were a few inches longer during basketball season and are now in the “rebuilding phase.” 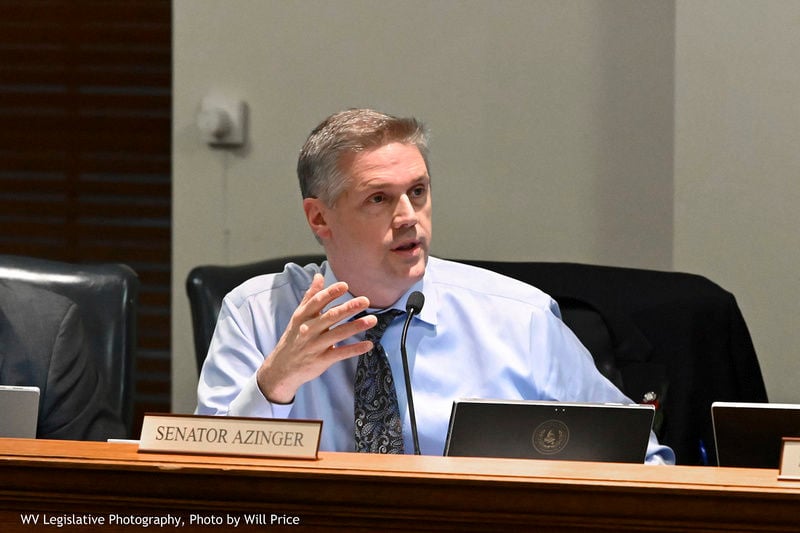 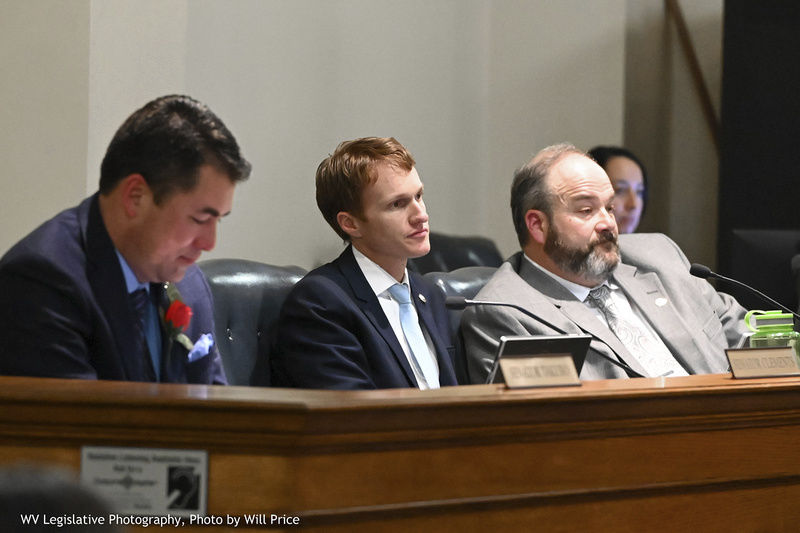 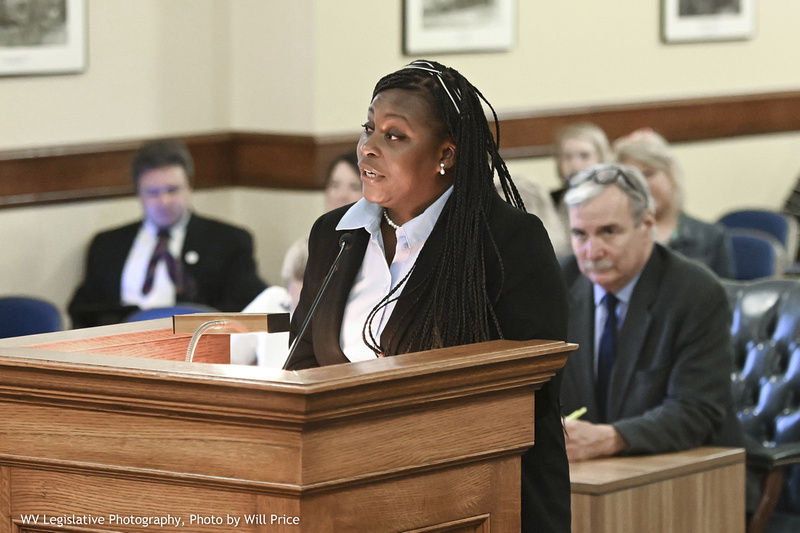 Will Price/WV Legislative PhotographyTarsha Bolt, of Beckley, testifies before the Senate Judiciary Committee on Monday afternoon. 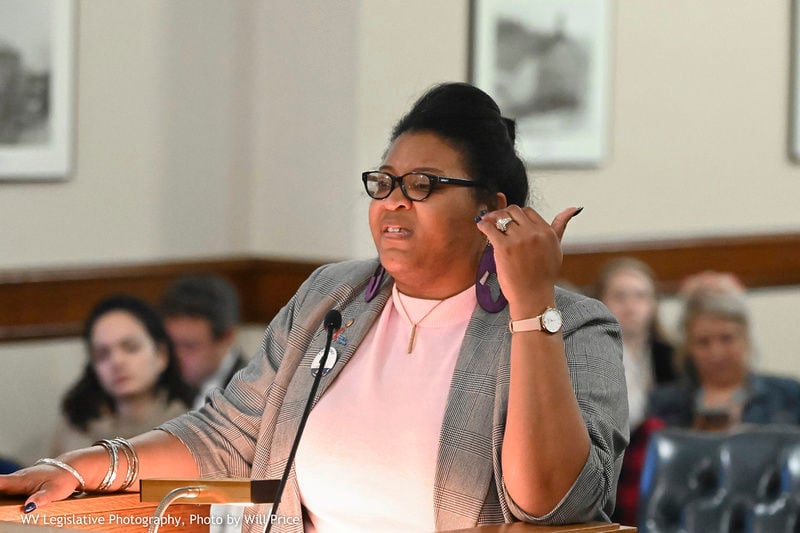 Will Price/WV Legislative PhotographyDel. Danielle Walker, D-Monongalia, sponsored a similar bill that has stalled in the House of Delegates.

Will Price/WV Legislative PhotographyMatthew Moore said his dreadlocks were a few inches longer during basketball season and are now in the “rebuilding phase.”

Will Price/WV Legislative PhotographyTarsha Bolt, of Beckley, testifies before the Senate Judiciary Committee on Monday afternoon.

Will Price/WV Legislative PhotographyDel. Danielle Walker, D-Monongalia, sponsored a similar bill that has stalled in the House of Delegates.

Charleston – After a Beckley mother told lawmakers that her son was barred from playing high school basketball games because of his dreadlocks, the West Virginia Senate's Committee on the Judiciary passed a bill on Monday clarifying that state law prohibiting racial discrimination includes mistreatment based on hairstyles typically associated with a race.

Sen. Mike Azinger, R-Wood, a white man, vehemently spoke against the bill, telling Tarsha Bolt, the Beckley mother and a black woman, that she was trying to "undercut authority" and trying to pick "the rules" for herself.

Bolt told lawmakers that a basketball coach at Woodrow Wilson High School told her son, Matthew Moore, a freshman player, that he had to cut his dreadlocks because they weren't "neat," even though other players on the team had afros and man-buns.

She explained to lawmakers that dreadlocks are "one of the most manageable ways" for black people to wear their hair.

He had consistently shown up at practice, she said, but had to sit out the first three games. He began to rip out his dreadlocks, and even cried, according to Bolt.

"He doesn't like for me to say that," she said.

After the school and Board of Education were no help, she said, she contacted lawmakers.

"I tried to do everything I could to talk to the school, talk to the local county board of education and said we need to change this, because no kid should be in a situation like this, and that's why we're here today," she said. "We have a lot more things to worry about like his academics, his future, which college he's going to. Why are we here discussing his hair?"

Bolt also said that the coach, who is black, may not be racist but has "some biases that he needs to address."

"So I think one of the most important things today that you guys have the power and the ability to do is make sure that no kid can be discriminated against because of their ethnic hairstyles," adding that there are other ethnic hairstyles.

Azinger told her she was "picking the rules for (herself)."

"You're deciding yourself which rules are just and which aren't," he said.

"I don't agree with that," she responded. "I can't control how Matthew's hair grows out of his head. All I can do as a mom is support him and make sure he maintains it.

"It shouldn't be a problem to respect his culture and embrace diversity on the basketball team," she added.

Azinger said with his sons, he tries to "back up the authority because I think that kids need to learn that – authority's not always right, sometimes they make bad decisions, and as a dad, I'm going to say to my son or to my daughter, look life's not fair... Sometimes life isn't fair. Sometimes things don't go the way you want them to go, but you got to listen to the coach, or the teacher, or mom and dad, or whoever. That authority is, I think, being undercut in culture today and I think that's what's happening here."

He said he saw the bill "as undercutting another standard and authority in society, but I appreciate you coming today."

"I can understand where you're coming from, and I respect authority, and I teach my son each and every day to respect authority," she said, "but what we've got to understand is right now there's a lot of people in powerful positions that have some outdated ways of thinking, and that's what this bill is here to address. It's not trying to undercut authority –"

"Well, I think that's what you're doing, though," Azinger interrupted.

"I would never tell my son to undercut authority, but this is just, it's a discriminatory act–," she said.

"I'm showing him how to stand up for what's right," she said.

Sen. Mark Maynard, R-Wayne, also spoke against passing the bill, saying he was worried about lawsuits for monetary damages, and argued that he would like to hear from the coach.

Sen. Stephen Baldwin, D-Greenbrier, who brought Bolt before the committee, also called on Del. Danielle Walker, D-Monongalia, to testify. She sponsored a similar bill that has stalled in the House of Delegates.

She compared the situation to slave-owners who used to force slaves to shave their braided hair, adorned with beads and jewels.

Sen. Paul Hardesty, D-Logan, commended Matthew, who was sitting in the audience, for coming to the Legislature.

"We kinda like basketball in Logan and Matthew, if you would like to know the coach's name at Logan High School, I can hook you up," he said.

He added that, on a more serious note, it's difficult enough being an adolescent.

"I want you to keep your chin up," he told Matthew.

In an interview following the vote, Moore, 14, said by the second game, he was sitting in the locker room pulling out his own dreadlocks.

"It bothered me to an extent where at one point I just didn't want to play for Beckley basketball," he said. "But since my mom's probably about to get this law passed, I'm probably going to play next year."

He said he hadn't expected the bill to pass.

His mom was "one of the only ones" who thought the bill had a chance, he said.

Now, he says: "You can do anything if you put your mind to it."

Also in an interview after, Bolt further addressed Azinger's accusation, that she was undercutting authority.

"Without authority in the world we would have chaos, but this is just asking for the right to be who he is and embrace his culture and be respected ... This is about being inclusive as a society," she said. "It has nothing to do with undercutting authority. I can respect authority if it's fair and it's right, but if it's outdated, and it's biased, and it's discriminatory, then it's not acceptable. I'm trying to teach my kids to stand up for what's right even if authority is dishing out wrong ideas and polices, we have to stand up for what's right and continue to evolve as a nation."

If the full Senate and then House of Delegates passes the law, a new provision to that code would state "discrimination on race includes, but is not limited to, discrimination based on hair textures and protective hairstyles historically associated with a particular race.

"The term 'protective hairstyles' includes, but is not limited to, hairstyles such as braids, locks, and twists."

Baldwin noted that discrimination based on hairstyles isn't limited to high school sports, noting that his secretary, who has dreadlocks, had told him she'd faced employment discrimination.

Azinger attempted to convince the committee to adopt a resolution to study the problem instead of passing the bill, saying there were "too many unknowns," but failed. Other lawmakers argued that there was nothing to study.

The bill passed on a bipartisan voice vote, with the vast majority of the committee heard voting for it. Locally, Baldwin and Sen. Sue Cline, R-Wyoming, were observed voting for the bill.

Jonathan Randall Miller, 37, of Hump Mountain, Lockbridge, passed away Monday, March 30, 2020, from injuries sustained in a motor vehicular accident. Born September 17, 1982, in Beckley, he was the son of Dale and Brenda Smith Miller of Lockbridge. Jonathan was a 2001 graduate of Meadow Brid…

Dorothy Elizabeth Hines was born on January 18, 1923 in Zenith, WV, and passed away on March 31, 2020 in Cool Ridge, WV, at the age of 97. Dorothy is preceded in death by her late husband of 35 years, Ralph Hines; her parents Jonathan and Neva (Harvey) Martin; grandson Tim Elliott; and 7 sib…