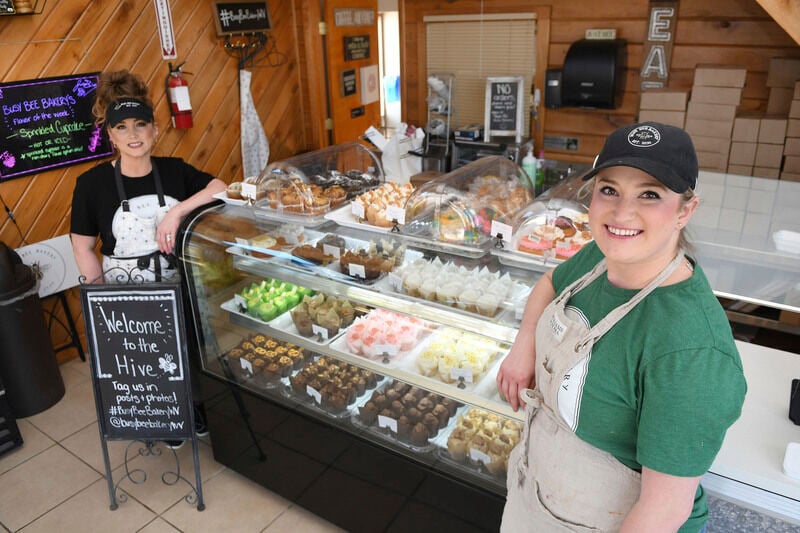 Brittany Bailey-Cline, right, and her mother Nicky Bailey welcome customers with a smile and something sweet to Busy Bee Bakery. 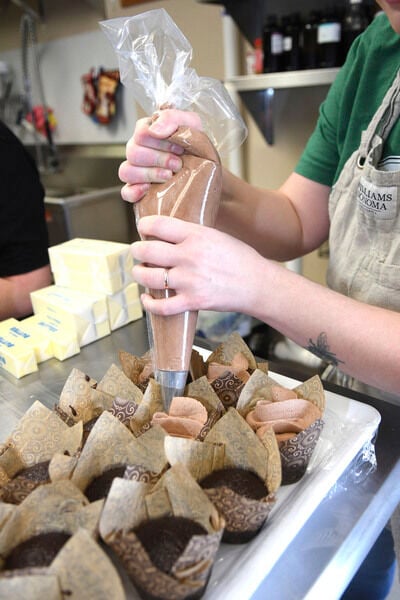 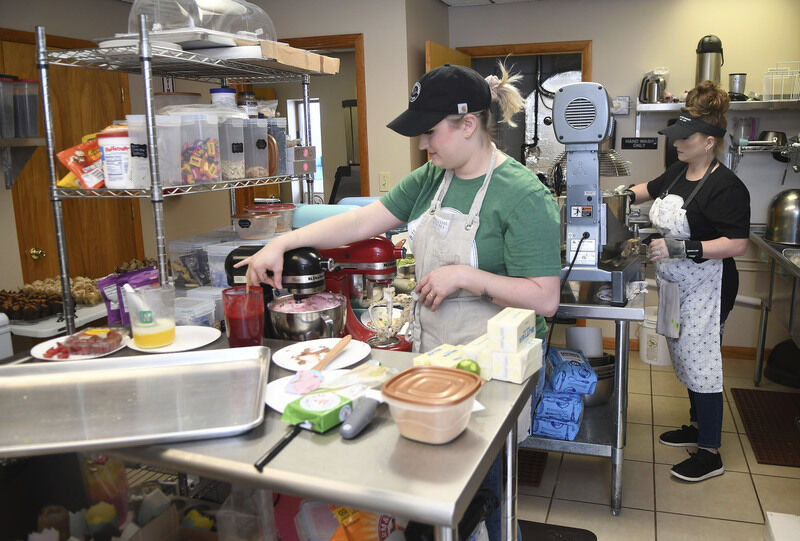 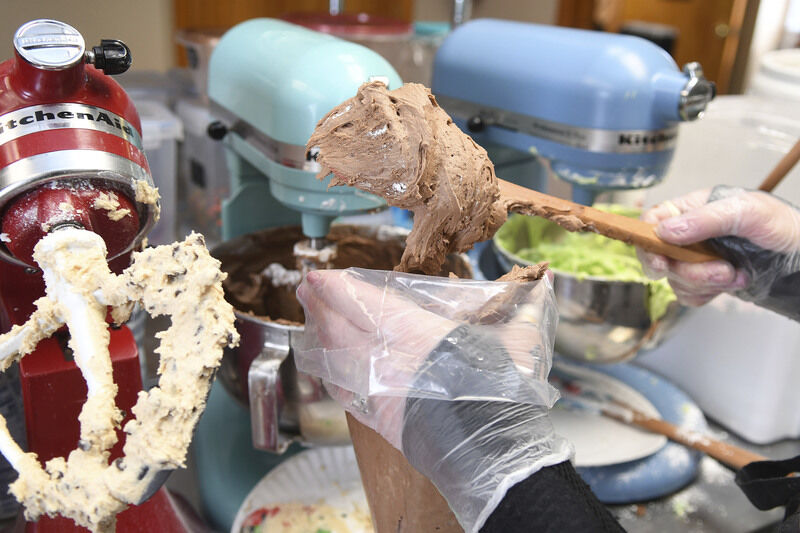 Brittany Bailey-Cline, right, and her mother Nicky Bailey welcome customers with a smile and something sweet to Busy Bee Bakery.

During the first few weeks and months of Covid-19 when much of the United States population was on some form of lockdown, in addition to disinfectant wipes and toilet paper, simple kitchen items like yeast and flour were also in high demand.

The world, it seemed, was nesting.

But Brittany Bailey-Cline has never been a fan of downtime.

“It started with sports, multiple sports, at a young age,” the 25-year-old Mount Hope native said. “And then in high school, I started working two or three jobs, so I always had something to do every evening.”

When she discovered photography – and realized she could make a career of it — during her senior year at Woodrow Wilson High School, her free time became nonexistent.

“That was a totally different ballgame of busy,” she said.

But in late March of 2020, when Covid brought Cline’s flourishing photography business to a screeching, albeit temporary, halt, Cline found herself at a loss.

“I had nothing to do and it was driving me crazy,” she said.

That’s when she, too, turned to the kitchen.

Unlike the salt rising bread that took over social media feeds throughout stages of the pandemic, however, Cline began making cupcakes.

And before she knew it, her pandemic hobby morphed into a business, outgrew two spaces and moved into its own storefront with lines wrapped around the building.

Although photography has been her bread and butter for the past six years, Cline said baking was her first business plan.

“I was really interested in baking shows and shows like 'Cake Boss,'” she said, “And as far back as middle school, I had plans for a bakery or a café/coffee shop of some sort.”

She said she remembers drawing photos of cakes and sketching out what her storefront would one day look like.

“I made cakes and cupcakes, maybe brownies,” she said, of the early creations she made from boxes and online recipes. “I never had a lot of time growing up to make anything from scratch because of sports and work.”

And though she loved baking, when a friend asked her to take her senior photos, she found a new love.

“I thought photography was fun and I wanted to do that for other people,” she said.

That was the beginning of Brittany Bailey Photography.

Pre-pandemic, she said her schedule was so steady that she rarely had a day off, with multiple sessions scheduled each weekday and a wedding every weekend.

Then Covid forced the postponement of two months’ worth of events.

“So, I started baking a lot and sticking cupcakes in my mom and dad’s and other people’s mailboxes, mainly because I had nothing to do,” she said.

As she tooled around in the kitchen, she began to revisit her childhood dream of opening a bakery.

“And I thought, ‘Man, this would be the time to go ahead and try this,’” she recalled.

First, she dropped the idea on social media, got what she said was some good feedback, and began work on a logo for a business that did not yet exist.

It needed a name.

“When I first started, I tried to call it Kitchen Bee,” she said. “But my mom said, ‘Why don’t you call it Busy Bee?’”

“I’ve had a bee tattoo on my arm for years because I’m really busy,” she said. “So, it‘s the perfect name.”

With a name decided, she completed the logo and then pulled out her photography equipment and began baking in order to get the perfect promotional photos.

Then in May, when things began to open back up a little bit, she and her mother Nicky Bailey, who lives next-door and serves as her partner in the bakery and as her second shooter in her photography business, began to offer cupcakes on Facebook.

“We had menu boards for what (flavors) was available that day,” she said, explaining she and her mom would bake between 300 and 350 cupcakes each day and meet customers in parking lots to make deliveries.

But she said they quickly discovered they couldn’t continue to operate at that level in a home kitchen.

"That’s an insane amount to do at your house,” Cline said. “Honestly, I didn’t expect the feedback we got.”

They had already moved from Cline’s kitchen into her parents’ bigger space, but they began looking for commercial property where they could install a commercial kitchen and open a storefront.

“We started with ‘practice days,’” Cline said, of the first days in business. “We quickly realized we shouldn’t do a grand opening because we wouldn’t be able to keep up.”

The bigger space — the two-story building is the former home of Raleigh Insurance — did not come with more employees.

“I want to keep it family only as long as possible,” Cline said, explaining she and her mom hold down the fort Wednesday through Friday and are joined by her dad and brother on Saturdays.

And her entire family, including her husband Jacob, a lineman for AEP, worked to get the building move-in ready.

“It’s definitely a family job for sure,” she added.

Though the expansion did not bring more employees, it did, however, come with an expanded menu, as customers can also order cannoli, cake doughnuts, cookies, hand pies, bagels, a variety of fun coffee flavors and cheesecake.

“The cheesecake is usually gone within the first hour we’re open,” Cline said, adding the cheesecake is offered in a variety of flavors including honey lavender and white chocolate raspberry.

But the showpieces, of course, are Busy Bee’s cupcakes.

“We have a little bit of everything,” she said, explaining the cupcakes range from vanilla to exotic and fun gourmet flavors.

“We’re very creative people in the family and I like to think very quickly,” she said. “Like, I think, ‘That’s a cute candle scent. I bet that would be a cute cupcake.’ The other day, my husband brought grape soda home and I was like, ‘That could be a cupcake.’

“There’s way too many (flavors) to count,” Cline added.

Of course, not every flavor — she makes ice cream-flavored cupcakes and seasonal cupcakes as well — is offered every day.

“We switch them around, so you have something different every time you come in,” she said. “But we do have our set ones that we always have, like some kind of vanilla or Death by Chocolate.”

She said she enjoys baking them all, mentioning a honeybee cupcake that tastes like honey lavender with an edible handmade honeycomb on top. And she said a cotton candy cupcake is probably the most popular flavor with both adults and kids so far.

But Cline doesn’t have a favorite cupcake or even a favorite dessert item.

“This is hilarious,” she said laughing, “but I don’t really like sweets.”

She knows how they’re supposed to taste though, so they’re thoroughly vetted. And she said her mom is also on the case.

“When we first started this, I lost 16 pounds and my mom gained eight,” she added, with a laugh. “She wanted to eat or try everything, so we’re good.”

It was a cold, drizzly afternoon as Beckley native Angie Harding and her husband Brice waited in line to try Busy Bee’s cupcakes for the first time.

Neither had consumed anything sweet since Christmas, and Angie, who had seen Bailey’s cupcake photos online, decided they would visit the bakery for their post-holiday cheat day.

“I’m a foodie so I stalk any new business in town,” Angie said. “I enjoy food pictures.”

Angie said she learned a bit about what to expect from the visit from the bakery’s social media page. So, she and Brice weren’t bothered when they waited in line, outside, for nearly an hour.

“The food is worth the wait,” she said. “We never mind waiting on something good.”

That wait has become commonplace for Busy Bee customers, though it’s not something Cline said she expected.

“It doesn’t matter what the weather, before we open for the day, we have a line around the building,” she said. “People have been standing outside in the snow.

Crazy in a good way, she said, as long lines mean people like what she’s doing.

But the demand is one of the reasons she said Busy Bee doesn’t offer cakes and doesn’t accept orders.

“We’re kind of a walk-in, grab-and-go convenience bakery,” she said, explaining she and her mom bake each item fresh every morning.

Down the road, she said she might add grab-and-go breakfast or lunch items to the list and possibly expand Busy Bee's schedule.

But she still operates Brittany Bailey Photography and doesn’t plan to leave that.

“I’m learning to balance the two businesses,” she said.

And she said she’s grateful for the success she’s had so far and looks forward to seeing her businesses continue to grow.