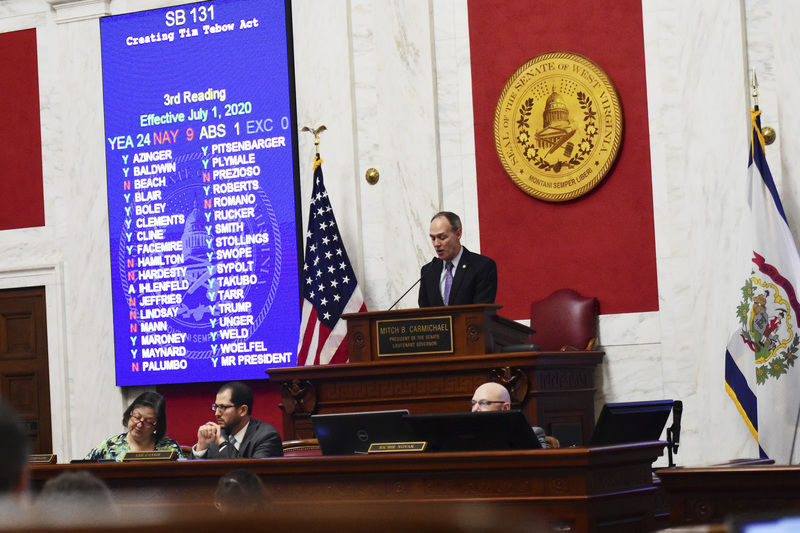 Senate President Mitch Carmichael reads the votes on the Tim Tebow Act in the senate chambers at the West Virginia State Capitol in Charleston on Tuesday. (Chris Jackson/The Register-Herald) 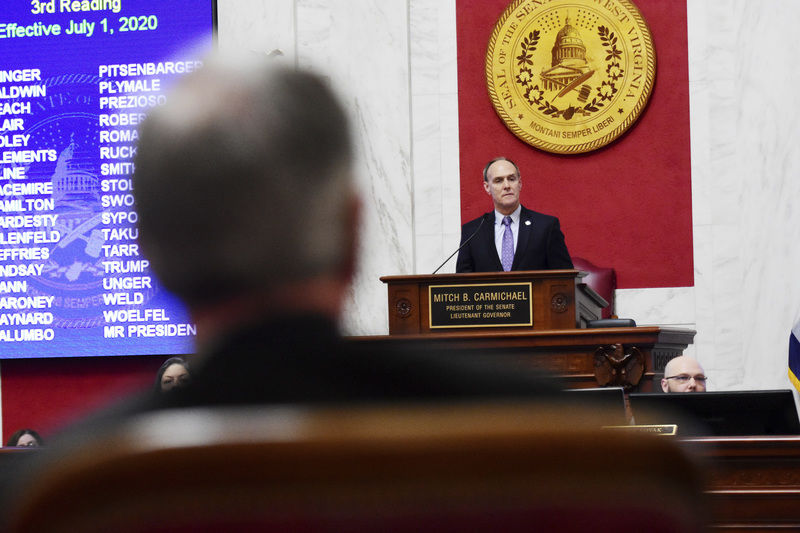 Senate President Mitch Carmichael looks on as senators debate the Tom Tebow Act in the senate chamber at the West Virginia State Capitol in Charleston on Tuesday. (Chris Jackson/The Register-Herald) 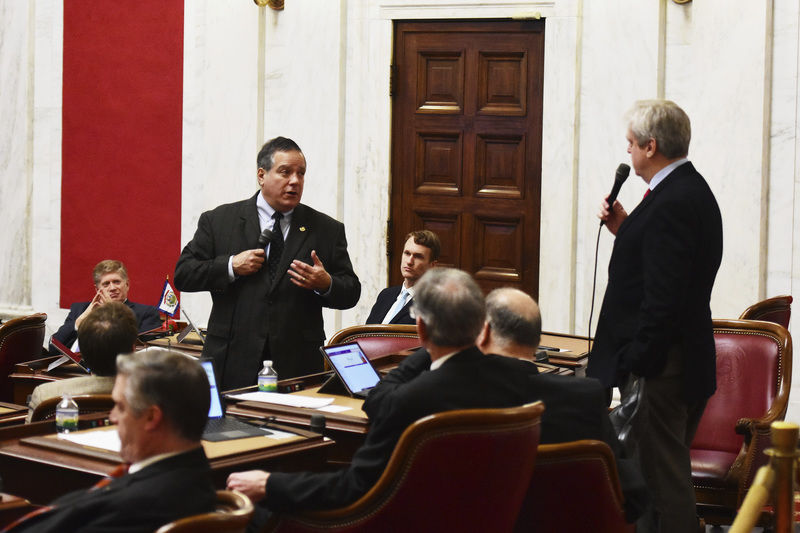 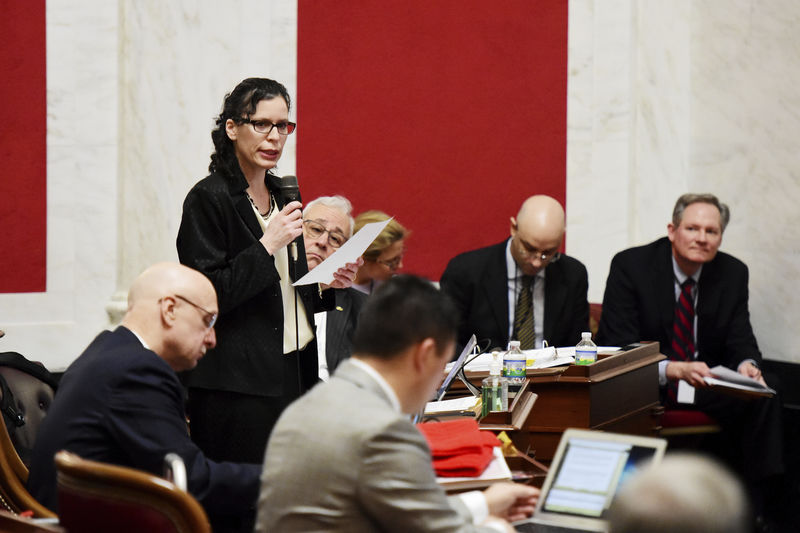 Senator Patricia Rucker, (R-Jefferson) speaks during the third reading of the Tim Tebow Act in the senate chambers at the West Virginia State Capitol in Charleston on Tuesday. (Chris Jackson/The Register-Herald)

Senate President Mitch Carmichael reads the votes on the Tim Tebow Act in the senate chambers at the West Virginia State Capitol in Charleston on Tuesday. (Chris Jackson/The Register-Herald)

Senate President Mitch Carmichael looks on as senators debate the Tom Tebow Act in the senate chamber at the West Virginia State Capitol in Charleston on Tuesday. (Chris Jackson/The Register-Herald)

Senator Patricia Rucker, (R-Jefferson) speaks during the third reading of the Tim Tebow Act in the senate chambers at the West Virginia State Capitol in Charleston on Tuesday. (Chris Jackson/The Register-Herald)

A bill that would allow homeschool and private school students to participate in public school sports and marching band passed the State Senate Tuesday on a 24-9 vote.

The vote came the day after Sen. Stephen Baldwin (D-Greenbrier) attempted to amend the bill, dubbed the "Tim Tebow bill," by adding changes including requiring home-school students participating in sports to be included in public school’s enrollment numbers, allowing local county boards to decide if they wish to allow the proposed bill, and changing the academic requirements of home-school students wanting to participate.

Although none of Baldwin's amendments were added to the bill, he still voted in favor of it during Tuesday's Senate floor session. He took to his Facebook page after the vote to further explain his "yes" vote.

"After much deliberation in which I could see both sides of the argument, I voted yes. Because sports break down barriers. Because we allow homeschool students to take band, vocational classes, and academic courses already. Because getting homeschool students involved in public school activities could help heal our divided communities," Baldwin stated on his page.

"You elected me to study the issues and do what I think is right for the community and the state. I talked to as many coaches, parents, and school officials as possible about this issue. Many of those folks, whom I respect greatly, urged me to vote no. I took their concerns seriously," Baldwin continued. "I even offered three amendments to make the bill better. But in the end, I think letting kids play is the right thing to do. Inclusion is the right thing to do."

Baldwin added the bill needs work, and he is hopeful when the bill gets to the House of Delegates, they will make it better.

"I also feel compelled to say one more thing: If we spent half the time and energy we spend on academics as we do on athletics, then all our children would be better for it. Athletics are an important part of education, but they are not the only part. We need to be as invested in academics as we are athletics if we want our kids to succeed," Baldwin said.

Before the bill passed, some senators stood up for and against the bill. Sen. Mike Woelfel, D-Cabell, was for the bill, saying he valued inclusion. He said he's seen first-hand sports lift confidence, promote leadership and offer a better understanding of diversity.

"Sports promote empathy and self-discipline," Woelfel said. "With that being said, I wonder why we'd exclude these students from participation? Why would we exclude a certain segment of our youth from these experiences that will likely enhance their quality of life?"

Sen. Paul Hardesty, D-Logan, felt there were too many unintended consequences that would come forward if the bill were passed, therefore he couldn't vote for it. He said he doesn't think any child in homeschool or private school should be discriminated against, and felt they should have all opportunities, but was worried some parents may take advantage of the opportunity.

"Where I come from, in Logan, sports is king. Sports are way more important in southern West Virginia than education ever was, although that's sad, it's reality," Hardesty said. "My concern is that the child in public school doing his best to make a C to be qualified to play ball — what happens now when he's not making the grades he should be to play, and his single parent or grandparent takes him out for 'homeschool' and he's not actually getting the education he needs.

"What if he starts missing a hot meal because he's no longer in school?" Hardesty continued. "It's not the kids coming in from homeschool to play sports that concerns me, it's the kids that would migrate out."

Sen. Mike Romano, D-Harrison, also opposed the bill. He said he's supported the Tim Tebow bill for homeschoolers for the last two years it's been presented in the Legislature, but now feels it will upset the system governing sports in West Virginia — the West Virginia Secondary Schools Activities Commission (WVSSAC).

In closing before the vote, Sen. Patricia Rucker, R-Jefferson, said she wanted to emphasize to Senate members the bill has additional criteria and oversight for students who wish to participate in the Tim Tebow bill.

"This reassures me greatly if you want to to be a student and leave school, the amount of proof that parent will have to turn over to school to show your child is doing well is double what a homeschool student already has to show, and it's a great way to provide more oversight," Rucker said. "I want to be sure we're meeting the needs of all students in West Virginia, and this legislation would allow students who attend private or homeschool who meet certain criteria to participate in sports in band.

"We need to tune out the political noise and do what's best for the students. Our job is to provide as many opportunities as we can so they can be successful."

The bill will now head to the House of Delegates.