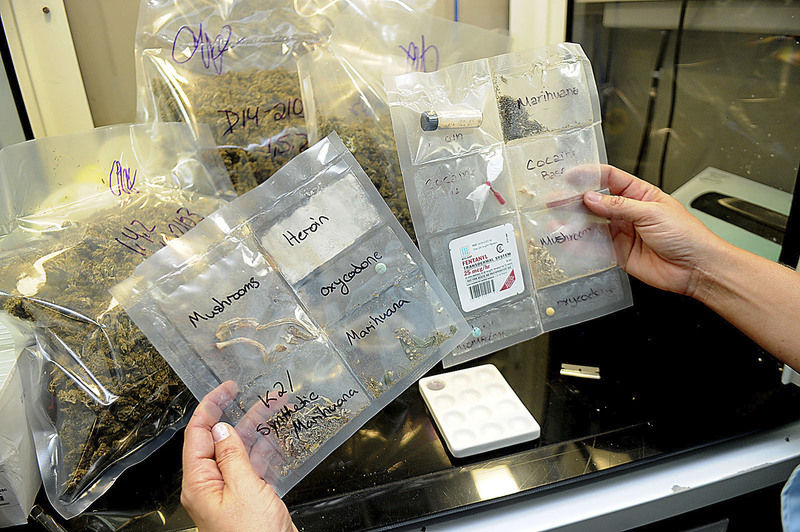 Rick Barbero/The Register-HeraldCarrie Ozalas holds up a variety of drugs to be tested for various investigations across the state of West Virginia. 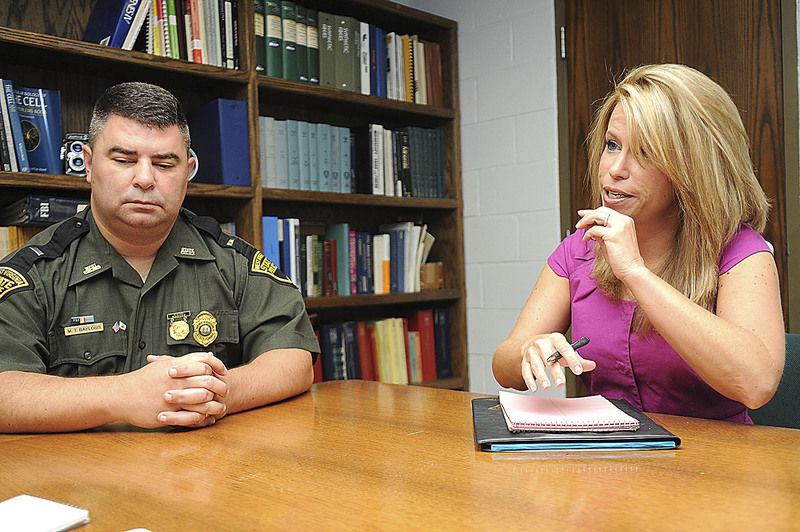 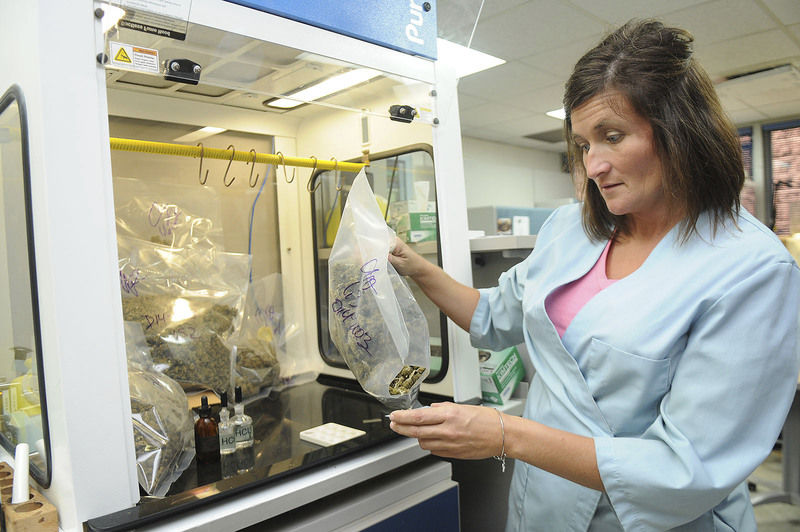 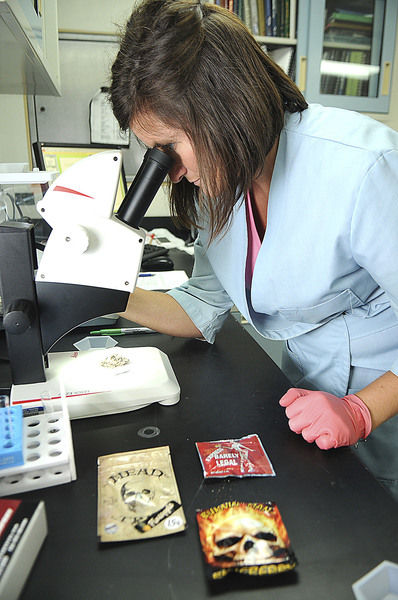 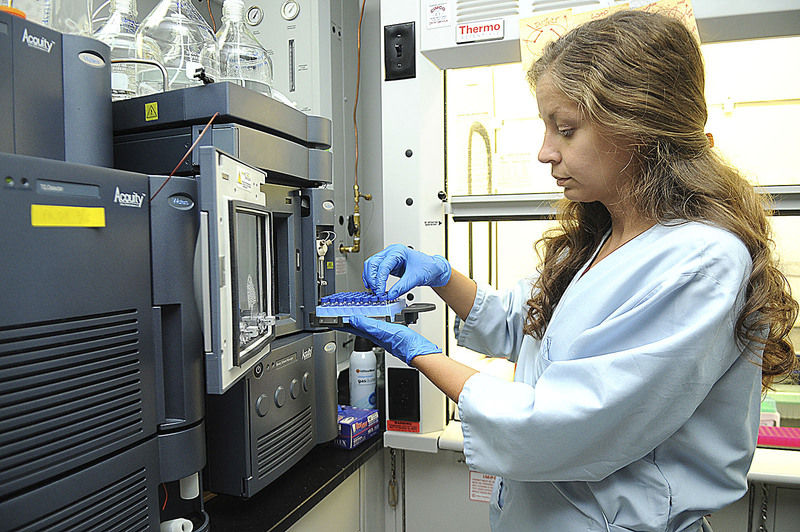 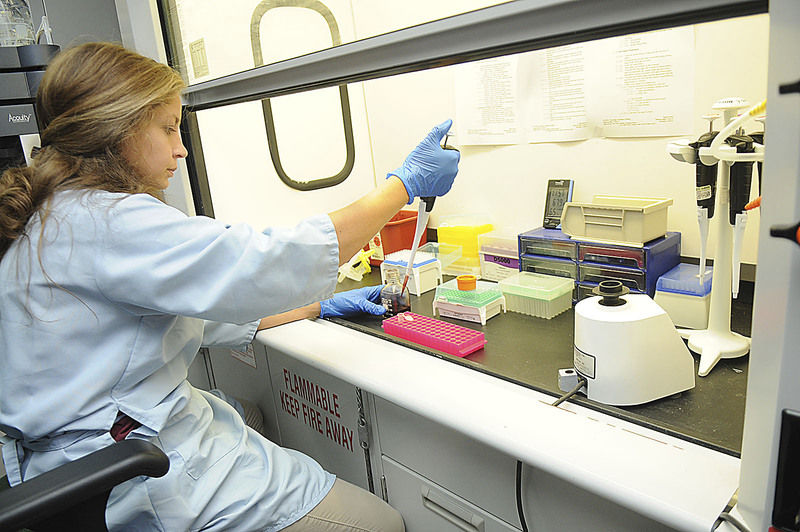 Rick Barbero/The Register-Herald Erin Feazell, Toxicology Supervisor for the West Virginia State Police Forensic Laboratory in Charleston does some testing on a variety of drugs

Rick Barbero/The Register-HeraldCarrie Ozalas holds up a variety of drugs to be tested for various investigations across the state of West Virginia.

Rick Barbero/The Register-Herald Erin Feazell, Toxicology Supervisor for the West Virginia State Police Forensic Laboratory in Charleston does some testing on a variety of drugs

In this three-part series “From Crime Scene to Courtroom,” The Register-Herald will follow the evidence trail involved in serious cases. Last week, readers learned more about evidence collection at the scene. Today, experts at the West Virginia State Police Forensic Laboratory will explain the next step — evidence processing.

The WVSP Forensic Lab, an accredited, full-service laboratory, serves all 55 counties in the state, including all law enforcement agencies from the local to the federal level.

Sheri Lemons, acting laboratory director and quality assurance manager, said the lab has the potential to service over 800 agencies from all across the state.

The lab, established in 1935, provides its services completely free of charge to the law enforcement agencies, and those services have expanded drastically over the years.

Within these disciplines, analysts perform a number of tests, including comparing of latent prints with those of a suspect, analyzing footwear and tire tread impressions, identifying controlled substances, testing urine and blood specimens for the presence of drugs, and evaluating a firearm or weapon to determine if it was used in a crime.

When officers or detectives bring evidence from the crime scene to the forensics lab, the items are dropped off at central evidence receiving. The evidence is logged and stored until analysts can perform testing.

At the full-service lab, Lemons said the analysts can perform multiple tests on multiple pieces of evidence.

The firearm would pass through three different types of tests at the lab, all while the analysts use intact chain of custody and a number of quality measures to ensure the way it comes in the door is the way that it goes back out the door, back to the officer.

Lemons also said if a bullet is found at a crime scene, analysts can determine the type of weapon from which it was fired. And even if a criminal may have tried to remove a serial number from a firearm, analysts can perform a restoration.

The lab accepts nearly all types of evidence, including blood and urine to test for drugs present in someone’s system.

Lemons said the toxicology department has a panel of drugs that can be tested for, and the panel is modeled on what’s being seen nationwide.

“There are so many drugs out there people can take, that we may not be able to test for all of them,” Lemons said, but a list will be provided to the investigator after the test is complete, identifying any drugs that were detected.

If the investigator would suspect another type of drug the lab is unable to test for, analysts will recommend additional testing elsewhere.

“It’s actually an established theory. It’s the concept that in a lot of cases, a jury almost feels like the case is not complete if there is not forensic evidence completed.”

She said oftentimes, that link is simply not there.

“Obviously, a lot of times there is, seeing that we get 6,000 cases a year. Our technologies have improved over time to allow us the capabilities of doing more testing, but sometimes, it’s just not there.”

Time is also a huge misconception in television versus reality. On TV, police work a crime scene, the crime lab processes the data, the case is prosecuted and the bad guy is locked away all in an hour’s time.

The lab currently has a backlog of cases, which causes delay, but each test of each piece of evidence in a case also takes time to process.

Timelines vary, but if a prosecutor or investigator lets the lab know a trial date is rapidly approaching, requests can be made for the evidence to be expedited.

All the evidence is prioritized, based largely on trial dates or if there is an immediate danger to society.

“If a trial date is coming up, or if we have somebody out there who is committing a crime and (officers) really need our help to ensure the public is safe, we’re going to absolutely put a rush on a case like that. Those are our two main focuses.”

Lemons said the lab typically receives 30 to 50 expedited requests per week, which really cuts down on efficiency. Analysts have to stop what they are doing and move those cases forward.

“It can almost grind us to a halt sometimes,” Lemons said. “It’s overwhelming to our analysts trying to keep up.”

The turnaround time is not only for the benefit of the lab, but also for the owner of the vehicle.

“Say it turns out that there’s nothing connecting that (to the crime), we want to get their vehicle back to them.”

While television shows and documentaries have given people a better idea of how the process works, those shows can also have a negative impact.

“You’ve got to remember, not only is the general public watching these shows, but the criminals are also watching,” Lemons said.

Analysts are sometimes asked to testify in court, especially with major felonies, to better explain to a jury how his or her job is performed and the results yielded from testing.

Lemons said sometimes though, because of the results from the tests, defendants may opt to take a plea deal instead of taking the case to trial.

“Forensics is an investigative tool. The idea is we can help the investigator with his case and, in turn, help the prosecutor to try a case.”

“That’s what it’s all about,” Baylous said. “It’s collecting the evidence and doing the proper work as they’re supposed to do and coming up with a conclusion — but it has to be the right conclusion.”

Lemons said she once had a victim come to her after a trial and hug her. “Sometimes we forget how personal it is.”

She said she and the other analysts take the personal aspect out of the cases, because their jobs rely on being unbiased and neutral.

Being unbiased is the No.1 requirement of a forensic analyst, Lemons said. No matter if the person works for a police agency or a private industry, all analysts must remain neutral.

Lemons said the lab employs just over 40 scientists who have a number of different backgrounds, all with a minimum of a four-year degree in forensics or another branch of science, such as biology or chemistry.

Some of the disciplines, DNA for example, usually require a master’s degree. Additionally, after a candidate is hired at the lab, Lemons said in-house training is required. The training times vary for each discipline — as low as six months for some branches and as much as two years for firearms specialists.

Losing an analyst can be detrimental to the lab because of the training period, Lemons said, but they do have a good pool of applicants. She said the lab has no trouble recruiting, possibly because of the popularity of the forensics field, but they do sometimes have issues maintaining the scientists.

Lemons now oversees the operations of the laboratory, ensuring the quality and efficiency, but back in 2002, she started out screening the evidence.

While she was in college, she anticipated going to medical school, but a forensics class flier steered her in a new direction.

“I thought it would be interesting to explore. This was at the height of ‘CSI,’ right when it was coming on.”

She said she was afraid the field would be a fad, but soon found out it was a viable career option. She obtained her bachelor’s degree and eventually focused on DNA in her master’s program. She’s still a proficient DNA analyst, although she doesn’t handle much case work anymore.

”It’s something different every day,” she said.

Most importantly, she said young hopefuls need to have integrity and great moral character.

She said the lab will not hire anyone who has any type of criminal background or any history with drugs, so decisions made during one’s youth carry great weight.

“I know a lot of what people think they do in their younger years is not going to have an impact, but it does. It follows you.”

In the final installment in the series, readers can learn how evidence collected at a crime scene and the results found from the crime lab can assist prosecutors or defense attorneys in their cases.

The lab does not charge any law enforcement agency for services provided, so those funds come from the general revenue budget of the West Virginia State Police.

He said it is often difficult for the administration to decide where to spend that money, as there is a backlog of lab cases, as well as a need for additional troopers on the road.

While he said there are criticisms about the timeliness of the lab’s work, there are never any critical comments about the quality of their work.

“It’s exemplary thanks to the dedicated people who work there,” Baylous said. “But you can only do so much with so many resources and so much manpower.”

For example, the toxicology department is currently short-staffed. To maintain accreditation with the American Society of Crime Laboratory Directors Laboratory Accreditation Board, the lab must maintain two analysts in each branch. Toxicology currently employs only one individual; therefore, her findings must be submitted to an external lab to be verified, so the lab can remain accredited.

Not only does that submission to an external lab cost additional money, but it also causes delays for the results of cases.

Both Baylous and Sheri Lemons, acting laboratory director and quality assurance manager, said a possible solution could be a special revenue funding, an option they hope to see the state Legislature explore.

“We’re not looking just at the cost of continued trial dates and the ramifications that we hear about the backlog, but you’ve got a potential defendant or an individual sitting in a regional jail somewhere waiting because of our delay,” Lemons said, which further increases regional jail costs. “There’s just so many factors to consider when you look at the big picture.”

Eventually, if and when the funding is available, Lemons said she would like to explore additional disciplines, including mitochondrial DNA, as well as fiber and hair analysis.

Funding is always a concern, and costs are anticipated to rise in the next four years because of technological changes. In the next four years, Lemons expects the lab will need $2.2 million to update equipment. After a piece of equipment has become dated, the company will no longer service it.

The instrument used in toxicology screens, for example, costs $400,000.

“This is not a cheap business.”

He said the funding will be used toward eliminating the backlog of cases, as well as to train and employ personnel.

Rahall said, “By reducing the backlog in forensic analysis, this funding will help to strengthen the criminal investigations of the State Police — from collecting evidence, to making arrests, to helping prosecute criminal offenders.”

Kitty Acord Lusker, 81, of Valrico, FL, born on December 21, 1938 in Cranberry, WV, entered into eternal rest on September 25, 2020. Expressions of condolence at HopewellFuneral.com.