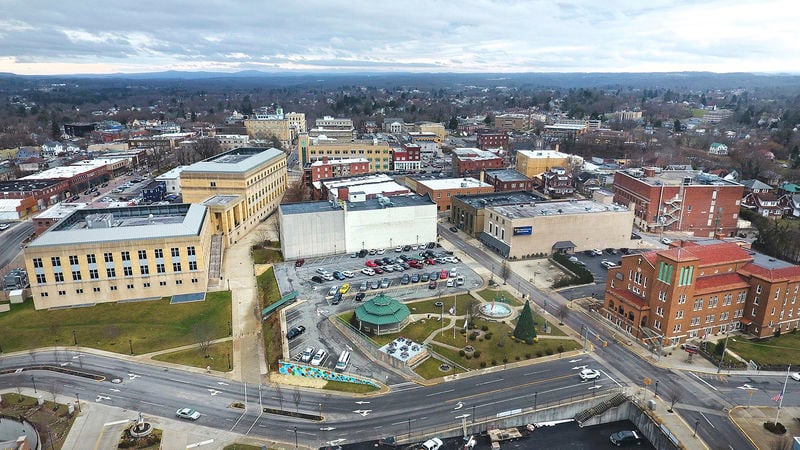 An aerial view of downtown Beckley shows the Neville Street parking lot. During the week, according to city officials, parking is at a premium. Over the past two years, Rappold has made a push for more parking. (Jenny Harnish/The Register-Herald) 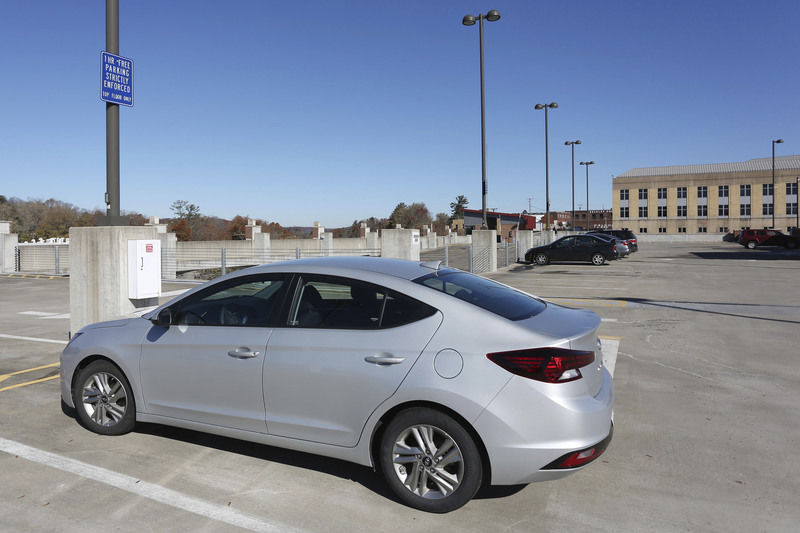 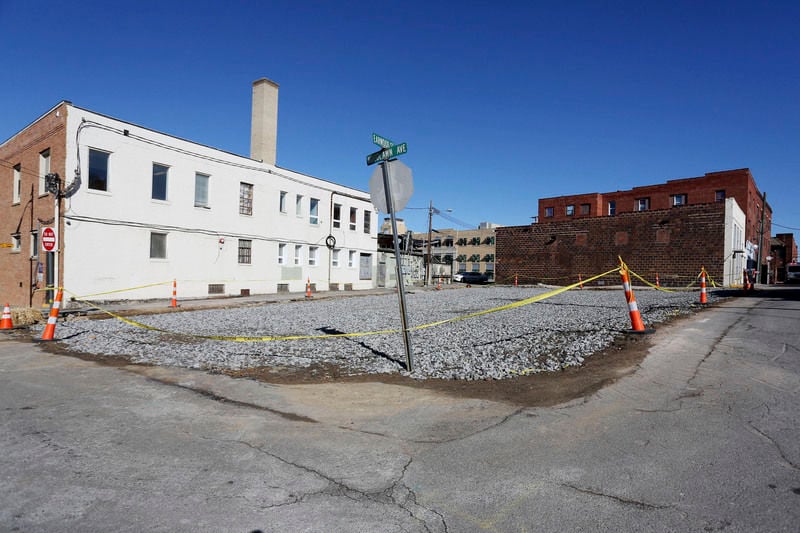 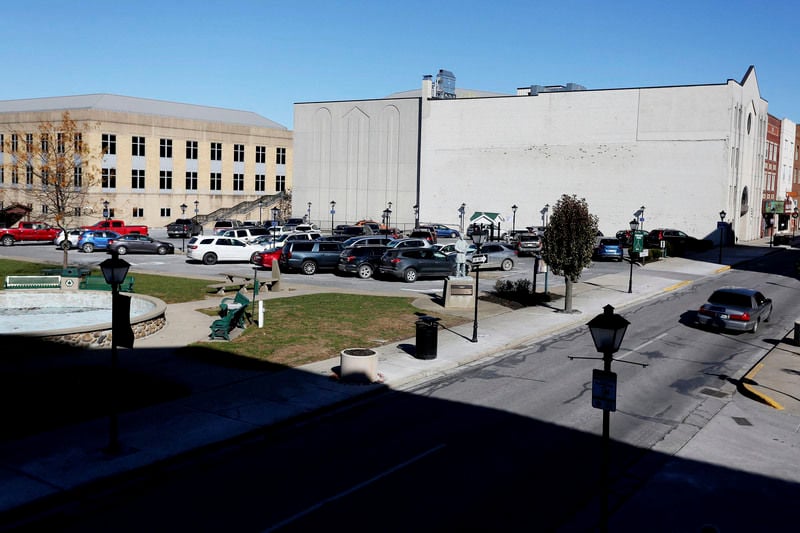 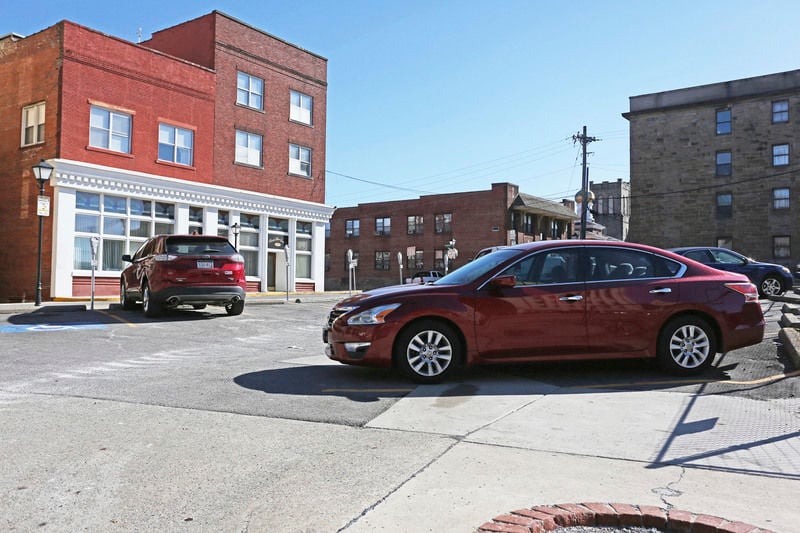 An aerial view of downtown Beckley shows the Neville Street parking lot. During the week, according to city officials, parking is at a premium. Over the past two years, Rappold has made a push for more parking. (Jenny Harnish/The Register-Herald)

Beckley needs more parking spaces in order to develop and to attract entrepreneurs, Beckley Mayor Rob Rappold and At-Large Councilman Tim Berry said Friday, and a cultural shift that happened in the 1980s with mall parking is partly to blame.

The councilman said Friday that city officials and downtown Beckley business owners want to expand the downtown economic landscape and to accommodate the growth of West Virginia University Institute of Technology and an emerging arts scene.

They face a litany of challenges, including older buildings that are cost-prohibitive for an entrepreneur to update, lending institutions that don’t judge a downtown opportunity as a promising investment and parking.

Over the past two years, Rappold has made a push for more parking.

Parking expansion plans now include the controversial demolition of the historic Burleson building on the corner of Earwood Street and Woodlawn Avenue and to purchase a building beside it for later demolition. City officials have not decided if the lots will offer monthly or metered parking.

He said that WVU Tech officials have requested more downtown parking, as university development experts plan to broaden the WVU Tech footprint in Beckley and to expand the campus to include the old RESA building at 400 Neville St.

“My personal feeling is, WVU Tech would sign up for every space we could create in that general area,” said Rappold.

The School of Creative Arts on Neville Street has asked for more parking, he added.

The old Beckley Police Department is also slated for demolition, according to comments by Rappold. There is a possibility that parking will be added there, said Berry.

Berry, who is also a real estate broker, emphasized that the need for parking is a key piece of keeping existing businesses and attracting new ones.

“When I have an opportunity to talk to someone about bringing business uptown, the first thing they always ask me is, ‘Where’s the parking? Where do my customers park?’” Berry reported. “When you tell them we’ve got the (Beckley Intermodal Gateway) and the little lot there on South Heber and the parking lot beside the State building, it’s not close enough, or it’s not enough parking.

“Parking is going to be an issue, any time you talk about uptown. We don’t have enough parking right in front of the stores.”

In larger cities, employees and patrons may not mind to take a cab, circle the block for 20 minutes in search of a vacant space or walk for several blocks.

But the 1980s advent of the mall in rural and suburban regions like Beckley robbed downtowns of anchor stores like JC Penney and G.C. Grant’s and the thriving mom-and-pop shops that sprung up around them, said Berry.

“The mall” and supermarkets also caused a shift in how patrons and employees think about parking, he said. Suburban and rural shoppers want to park in a lot that is directly outside of a mall or a large department store instead of parking on the street several blocks away and strolling through the downtown streets as they once did.

“It’s a matter of perception,” said Berry. “They didn’t see this back in the early 1980s when the malls basically took the country store.

“You’re probably not walking as far uptown as you would if you would go to the malls or Walmart, for that matter,” he said. “Once you get within the confines of the stores or the malls, you’re going to walk way farther than what you would (walk) uptown.”

He pointed out that now, downtown Beckley is working to attract back stores and that city officials must accommodate the “mall parking” expectation of business owners and customers.

“When you consider bringing business uptown, you’re certainly going to have to address closer parking to the businesses,” he said.

Berry said that parking concern is one reason that two-way traffic would not be advisable for downtown Beckley. Two-way streets would reduce curbside parking space, he said.

Even a “greener” approach to the parking problem would not be likely to cut down on the need for more spaces, said Berry.

With Active Southern West Virginia promoting walking and biking in the city and an influx of young WVU Tech students, some have suggested that Council focus on encouraging more cycling and walking and pedestrian traffic, and New River Transit has publicized its service in city limits, adjusted routes and added bike racks to buses.

Berry said he is in favor of adding a bike lane and increasing pedestrian traffic with better cross signals.

“I don’t think it would have that big of an impact on (parking),” he added. “People are going to want parking that is closer to the stores, regardless of where you are.”

He said that the West Virginia Department of Transportation will have to support any city effort to build bike lanes since South Kanawha Street is a state highway.

“Most of our lots are pretty much up to capacity,” she reported.

There are 238 second-level spaces at Beckley Intermodal Gateway (BIG) that are rented monthly and open to the public on weekends. Waddell said “about 95 percent” of those spaces are taken and that the Internal Revenue Service in downtown Beckley just made new hires.

The YMCA rental lots have not been as busy since an insurance company left Beckley recently, she said, and there are currently 28 spaces in the Piney Avenue lot, with three to four unrented spaces.

The East Prince and Piney Street lots are not considered prime lots for parking, the mayor added.

Waddell said that a pay box is going to be put on top of BIG, where people are currently parking for free.

Waddell said most city parking lots are rented per month.

Metered parking lots include South Heber and Neville and the State Building lot.

Waddell said that motorists rarely call the mayor’s office to lodge a complaint about parking.

Parking has been a hot issue at past Council meetings.

In March 2018, some business owners complained that metered parking in the few lots outside of their properties was bad for business. A council member and at least one shopper shot back that business owners and their employees parked in front of their own businesses, leaving too few spaces for shoppers during peak downtown business hours.

Also in 2018, Council adopted a 3-month stay of paid parking during lunchtime hours on weekdays, to encourage visits to downtown eateries and other businesses.

Council and city officials also launched the Passport Parking mobile app, which allows motorists to park, pay and add time on their mobile phones, in 2018.

Some have complained that the mobile app added a $5 processing fee to the existing $3 ticket, meaning that a violator pays $8 for the first ticket.

Some maintain that the city should terminate parking fees and tickets altogether.

The mayor reported Friday that parking fees do not make a profit in the city.

He said the prime uptown parking lots are $40 per month, while more remote lots like Piney Avenue and East Prince Street are only $15 to $20 each month.

Official figures were not immediately available to The Register-Herald on Friday, but Rappold said that an informal assessment he conducted recently suggested that about $120,000 is raised annually from parking fees.

“Our other costs were very close to that, when you look at retiring bonds and paying our parking attendants,” he said. “So it’s not a money-maker for the city.”

A parking bond was paid off earlier this year.

Rappold said that in downtown Beckley, parking is at a premium. The goal of paid parking is to ensure that everyone gets an equal shot at doing business or enjoying a meal and shopping.

“The most important thing about paid parking is treating everybody equally and playing on a level playing field, and not allowing certain people to park at no cost and other people to have to pay a meter,” he said. “We’d love to reach the point where we would have totally free parking, but when you do that, you still have to police it because there are people who would park cars for 24 hours, in certain spots.”

Jack B. Ashley died March 23, 2020, and a memorial service honoring him will be held, Saturday, July 11, 2020, at 2:00 pm at Miller Memorial United Methodist Church in Bellepoint, with Reverend Doctor John Sauvage officiating. Friends may call from 1:30 p.m. until time of service to greet th…

Beverly Lynn Ennis, 55, of Rainelle, passed away Monday, July 6, 2020, at her home following a long illness. A graveside service will be 1:00 p.m. Friday, July 10, in the Ennis Cemetery, Backus Mountain, Meadow Bridge. Online condolences and full obituary at www.smathersfuneralchapelinc.com.…