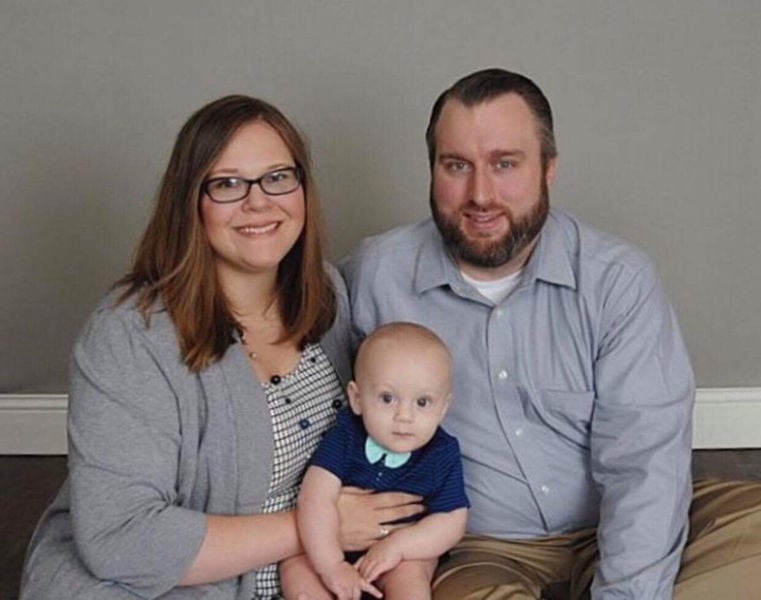 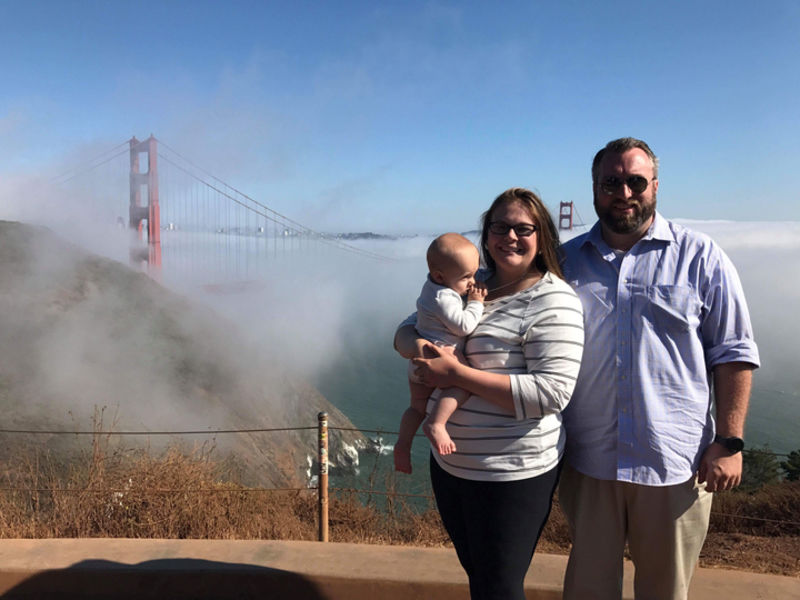 Ashley and Sean Noland originally thought they would stay in West Virginia long-term, saying their goal was to be part of the solutions and the change they wanted to see in the Mountain State.

However, after the couple had their son Knox, who is now 10 months old, their perception started to change.

Ashley, 30, and Sean, 34, said they had good jobs in West Virginia. Ashley worked as the executive director for the Childhood Language Center and Sean worked in judicial administration at the state Supreme Court.

They also were active in the community with Sean serving as a member of Rotary and Ashley a member of the Junior League of Charleston. Both grew up in West Virginia ­– Sean from Daniels and Ashley from South Charleston. The two later settled down and bought a house in Nitro, where they lived for five years.

The two said they didn't foresee a bright future for their son if they stayed.

Sean later found a job in Redwood City, Calif., as a collaborative court coordinator for the Superior Court of San Mateo County and left the state in July. Ashley stayed a little longer in Charleston to finish out her time at her job, saying she wanted to give her employer enough time to find a replacement. In November, she and Knox joined Sean in California. Relatively soon after moving to California, she got a job as an internal communications specialist with a tech company called Guidewire Software.

“Ashley and I, we both weren't motivated to leave the state when it was just us, but even before Knox came along we knew the state had problems,” Sean said. “We also felt that if all the good people left – the educated people who can try to make things better – then what chance does the state have?

"But when our son came along, we looked at it and said we could stay and be part of the solution but our son would suffer," Sean said. "As much as we love West Virginia, we love Knox more and wanted to give him the best opportunity he could have.”

West Virginia has experienced a population decline for several years. Plus, the Mountain State has an aging population. Dr. Christiadi – one name – is a research associate for West Virginia University's Bureau of Business and Economic Research, and said the state has a compounding problem: Younger people are not moving into the state.

According to recent numbers from the U.S. Census Bureau, from July 2016 to July 2017, West Virginia ranked second highest in both numeric and percentage population decline. The Mountain State was one of eight states that lost population in that time frame. It was outpaced by Illinois for numeric decline and Wyoming for percentage decline.

U.S. Census Bureau estimates, from April 2010 to July 2016, show West Virginia lost 1.2 percent of its population, decreasing from 1.85 million in 2010 to about 1.83 million in 2016. Two other states lost population in the same period. Illinois' and Vermont's percentage of change were both negative 0.2 percent. West Virginia's neighboring states saw gains with Virginia as the top, gaining 5.1 percent.

West Virginia's population has fluctuated since its peak in the 1950s. A statistical brief from the West Virginia Health Statistics Center said more than half of the Mountain State's overall loss from outmigration during a 50-year period, from 1950-2000, occurred from 1950-1960.

Population continued to drop through the 1960s but started to increase in the 1970s. This trend was reversed in the 1980s. In the 1990s, population and net migration both decreased, both attributed to a natural decrease, where deaths outweighed births, the statistical brief said.

"One of the many reasons (population increased) was because the economy was doing better in the state than in the nation," Christiadi said. "If you pay attention to the flow of in- and out-migration, both declined in the big recession but the decline in the outmigration was much smaller than the decline in the in-migration.”

“In 2013, there was a big drop in the demand for coal internationally as well as nationally for competition with natural gas,” Christiadi said. “The state economy overall started to decline in terms of job growth. We saw a lot of job losses. That continues until about 2016.”

West Virginia also has an aging population, which contributes to a natural population decline. According to U.S. Census data, West Virginia was the fourth oldest state in 2016 with a median age of 42.2. In 2000, it was 38.9 years.

“Very few states in the nation have negative natural change and West Virginia is one of them because deaths outweigh the births,” Christiadi said. “One of the reasons is we have a higher share of the elderly population. The second is the death rate is higher in the state.

"Even if you control for age, death rates are still higher," Christiadi said. "At the same time, birth rates are lower even if you account for age. The death rate may be associated with poverty, a lot of physical jobs like mining and also because of the drug epidemic.”

Natalie Roper, who leads Generation West Virginia, and her husband Kemper Steffe, both 26, are "West Virginians by choice."

Roper and Steffe, who attend the West Virginia School of Osteopathic Medicine, are originally from Virginia and chose to move to the Mountain State.

Generation West Virginia is a statewide organization dedicated to attracting, retaining and advancing young talent in the Mountain State. Roper has conducted surveys as part of her work on why young people choose to leave the state.

“The two factors that drive a young person's decision of where to live and work are jobs and quality of place,” Roper said.

“We know people can't stay in a place without a job, no matter how much they like a place," Roper said. "We also know that even with a plethora of jobs, young people choose places they like. They choose livable vibrant places. Young people won't stay in places they don't like.”

Forbes recently ranked West Virginia as the worst state for business for the third year in a row. The report said West Virginia's population growth and college attainment rate both ranked lowest in the country. The Forbes report also cited West Virginia's legal climate, ranking the state among the worst when measuring business friendliness according to the Institute for Legal Reform.

The Forbes report noted a silver lining for the state: West Virginia's cost of living is the lowest in the country – 11 percent below the national average.

A hit on the economy

West Virginia's economy has taken a major hit since 2012.

John Deskins, director of WVU's Bureau of Business and Economic Research, recently presented the 2018-2022 West Virginia economic outlook report at a conference in Charleston. He said the Mountain State has lost about 26,000 jobs between the 2012 peak and its bottom last year.

Deskins said the good news is that the state may have finally hit bottom and is growing again. So far, the state has added 4,500 jobs but it's still lagging national growth. Deskins estimated labor could take up to four years to get back to the 2012 level.

However, labor force participation in the state is still dead last with 53 percent of the state's adult population either working or looking for work. The state has been last in this category since at least 1976. Deskins said reasons for people giving up on finding jobs include lack of education or job skills and poor health.

Christiadi said people's decision to move out of the state is mostly driven by economics and by how well the economy is relative to the U.S. economy.

According to a report by the nonpartisan West Virginia Center on Budget and Policy, about 23 percent of the state's workforce is employed in low-wage jobs.

About 77 percent of the state's low-wage workers live in a county where housing is unaffordable for them, the report said.

Economics is not the only driver. Many out-of-state students who pick up a degree at a West Virginia college move back home upon graduation.

Where are people moving? Christiadi said his research indicates that answer is mostly to surrounding states of Ohio, Pennsylvania and Kentucky along with Florida, North Carolina and South Carolina. Christiadi said Virginia and Maryland are exceptions because West Virginia gains more people from those two states than it loses.

The Nolands mentioned several reasons including the state's overall health and the opioid epidemic. However, the top reason, they said, was having a stable and bright future, which they didn't think was a possibility. Sean Noland said he was concerned with a lack of direction from political leaders.

"There are not a lot of opportunities in West Virginia but maybe if leadership was looking in the future and saying things are bad right now but things are going to turn around, maybe it would be worth staying," Sean said. "But the leadership is not there in my opinion.

"We didn't see it turning around and didn't see potential from it. We wanted to get away. We saw it getting worse before it got better."

Ashley said both of them still keep up with local news and do miss the people.

"At the end of the day, wherever we are, we are still Mountaineers," Ashley said. "We still root for West Virginia."