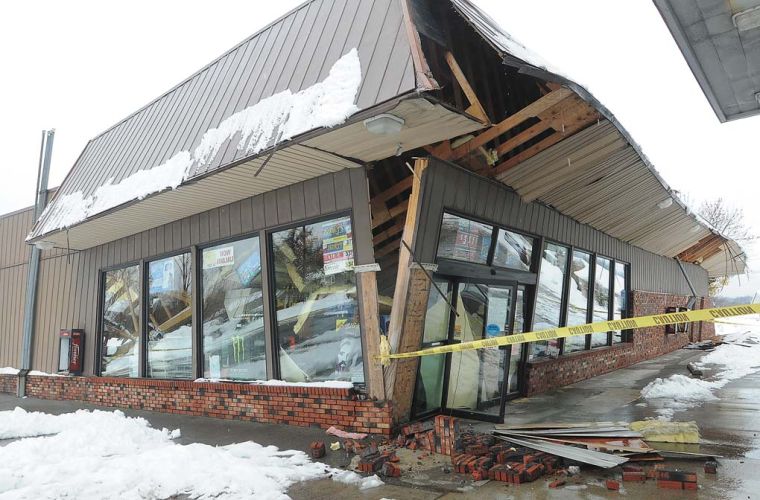 The roof on the U-Save station in Craigsville collapsed from the snowstorm that hit the area. 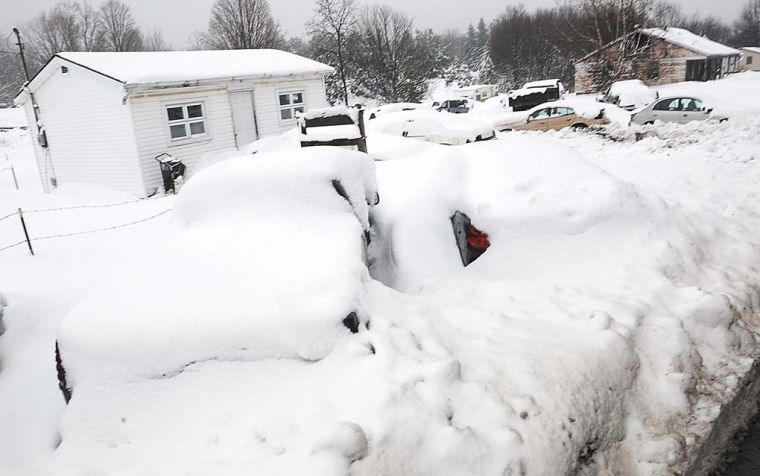 Vehicles sit in a used car lot in Nettie buried in snow from the storm.

The roof on the U-Save station in Craigsville collapsed from the snowstorm that hit the area.

Vehicles sit in a used car lot in Nettie buried in snow from the storm.

Nicholas County is slowly coming back to life after Monday night’s walloping  snowstorm that left nearly 90 percent of its residents and businesses without power and snowbound behind nearly 6 feet of snow in the mountains. It was one of the state’s hardest hit counties.

In Craigsville, Bill Farley sat in his blue Dodge truck with dents on the hood and roof — scars from where he, family and friends had to remove his collapsed carport that buckled under the weight of all the snowfall — looking at the rubble of the U-Save station, which was his favorite local hangout.

“This is my favorite spot,” Farley said. “I come here and drink coffee.”

The weight of the estimated 3 to 4 feet of snow had collapsed the roof of the U-Save in Craigsville, and its sister location in Summersville.

At the Summersville U-Save, Rachel Gohil, secretary/treasurer of the company, was working to clean up some of the mess and salvage what she could from the store. Gohil said U-Save plans to rebuild its locations and employees are being offered work at other sites.

“You don’t let it knock you down,” she said. “People have been good to each other.”

Among those offering assistance to Gohil were the seven employees of the Summersville store.

As far as snowstorms, Farley called what clobbered the mountains of West Virginia  “one of the worst I’ve ever seen.” The only other storm that compared was the March 1993 snow, he said.

Through the lack of power, Farley and many others in Nicholas County were doing what they had to do to just get by. He was among the fortunate whose home is heated by natural gas. He had been cooking meals on his grill; and melted snow in order to flush his toilets because he had also been without water.

Farley and his son, Roy Farley, both said that residents of Craigsville were working together to help their neighbors as best they could.

It’s a disaster and crisis such as what happened Monday night and Tuesday morning that “pulls together” residents of these small West Virginia communities, Roy Farley said.

Over roads that turned to one lane at times because of downed power lines and snapped trees, that’s just what was happening in Richwood.

The Food and Clothing Pantry in Richwood became a temporary home to those without electric or a way to cook for their families. By around 1:30 p.m. Thursday, most of the 50 or more people who had been there were able to go back home as power was coming back on in Richwood.

Frank Spencer, 89, of Horse Ridge, was among those still at the shelter. He had come into Richwood Monday evening and was “glad” he had stayed. Two other snowstorms came to Spencer’s memory that he deemed worse: the “monster” storm of 1942 and another in 1961.

Norvill Clark, of Richwood, had had his power restored earlier in the day, but was still at the shelter talking with some of those still displaced and assisting with the cleanup efforts.

“The people in this community are extremely resilient,” Clark said.

“It’s amazing what they’ve done,” Clark said. “They pulled it off and made it look easy.”

While taking a brief break from preparing dinner for those still at the Food and Clothing Pantry, Virginia Reed said she had only slept for about three hours since Monday. She had 50 to 60 people at times, all who needed assistance.

“They’re very grateful,” Virginia Reed said of those who were displaced because of the snow and havoc it wreaked. “They’re a joy. I think they like coming here. I enjoy the people and looking after their needs.”

Arlene Wolfe, who relies on oxygen, was among those waiting to go home.

If it were not for the shelter, “I’d be froze to death,” Wolfe said.

It was a little more than heat and food that Wolfe enjoyed, though. She said she also enjoyed the company of those who surrounded her at the shelter. Among those helping Wolfe was Sunny Hawkins, whose family had recently moved to the area from Ohio. Hawkins said she had brought her family to the shelter for hot food, but ended up staying a little longer to help in any way she could, including sitting and chatting with Wolfe and making sure beds were cleaned and straight.

Virginia Reed explained that the volunteers at the shelter were doing what they could to make everyone feel at home — including having a Wednesday night worship service and sing because no one could make it to church.

Richwood Fire Chief Tommy Coleman said his department had been working to cut trees and keep the roads open for the Division of Highways, and helping with welfare checks.

“It completely paralyzed us,” Coleman said. “You couldn’t get out. Small town ... we survived.”

Coleman said it’s not an exaggeration that there was snow 5 to 6 feet deep in the mountains; however, because the warmer temperatures and rain had melted much of what had fallen, it was more difficult to comprehend just how much snow Richwood received.

At the fire department with Coleman was Rodney Evans, deputy director of the Nicholas County Office of Emergency Management.

“You can’t be prepared,” Evans said of the amount of snow and number of power outages that occurred in the county.

Evans explained the county ensured all of their vehicles were in working order and prepared to go out, but had no way of knowing exactly what they would encounter.

To Evans’ knowledge, there had been no storm-related deaths in Nicholas County as of Thursday afternoon. He did say that there were some minor injuries and roof collapses in the county.

Evans is asking residents of Nicholas County to “be patient” and anyone in need of immediate assistance should call 911 and workers will provide assistance. Some roads, though, are still snow-covered and National Guard and DOH crews are working to clear them. It could still be a few days before workers are able to reach some residents and Evans is reminding those in his county that power restoration times are only estimates.

He is also encouraging residents who can safely remove snow from their roofs to do so. Evans stressed the importance of safety during snow removal and helping neighbors. Anyone who thinks their home roof could be in danger of collapsing should leave and call for assistance.

The Nicholas County OEM is monitoring the weather for the potential of flash flooding. Residents are being encouraged to do the same, Evans added.

With much of the county in recovery mode, Friday’s Nicholas County-Richwood High School football game has also been canceled. The game will not be rescheduled.

Ronald Dean Martin, 62, of Daniels, passed away Sunday, October 25, 2020, following a short illness. There are no services planned at this time. To leave online condolences please visit www.calfeefh.com. Arrangements by Calfee Funeral Home.

Tresa Marie Bowling, 75, of Flat Top, passed away Monday, October 26, 2020. There will be no services or visitation. The family suggests donations in memory of Tresa be made to Hospice of Southern West Virginia, P.O. Box 1472, Beckley, WV 25801. To leave online condolences please visit www.c…