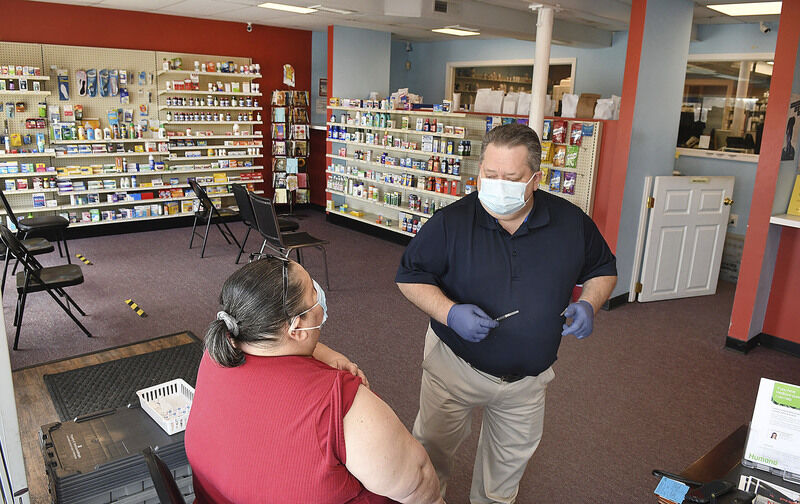 Gary Cunningham, pharmacist of Bypass Pharmacy on Eisenhower Drive in Beckley, prepares to give a Covid-19 vaccination to Tammy Rakes, of Sophia.(Rick Barbero/The Register-Herald) 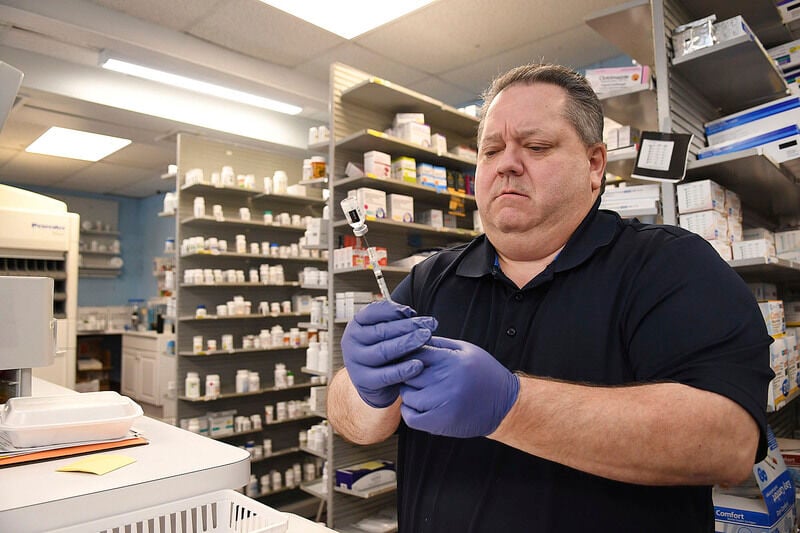 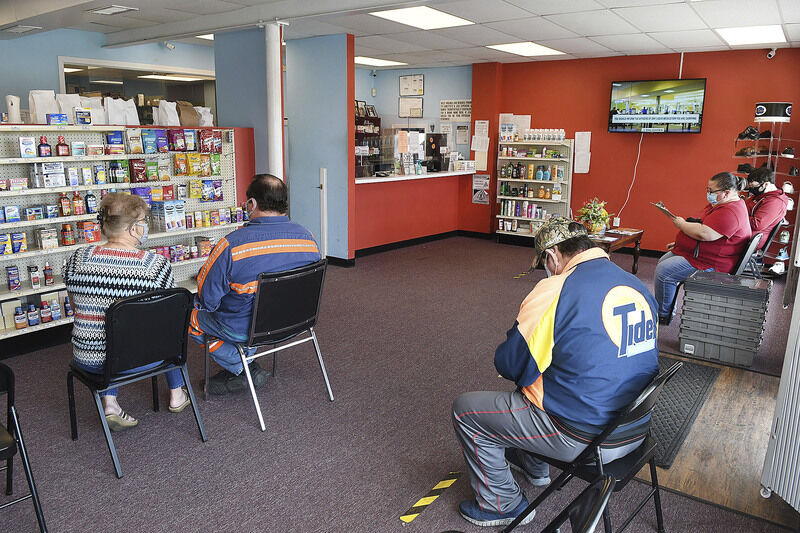 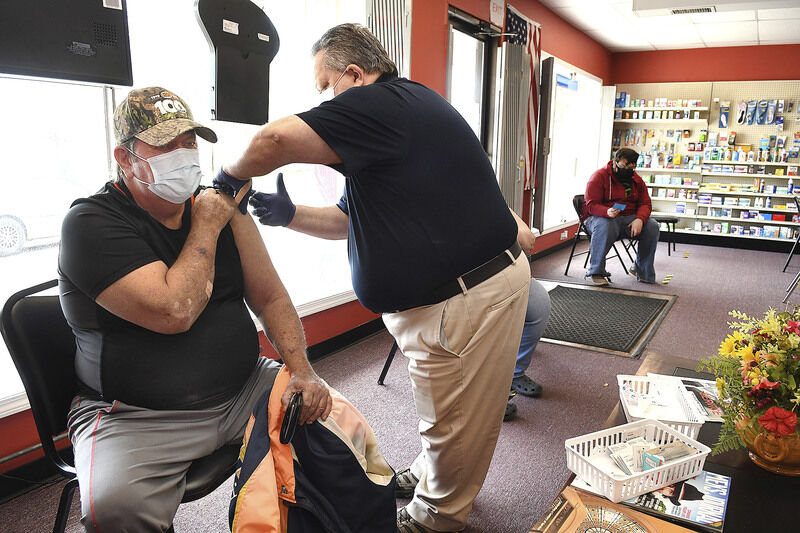 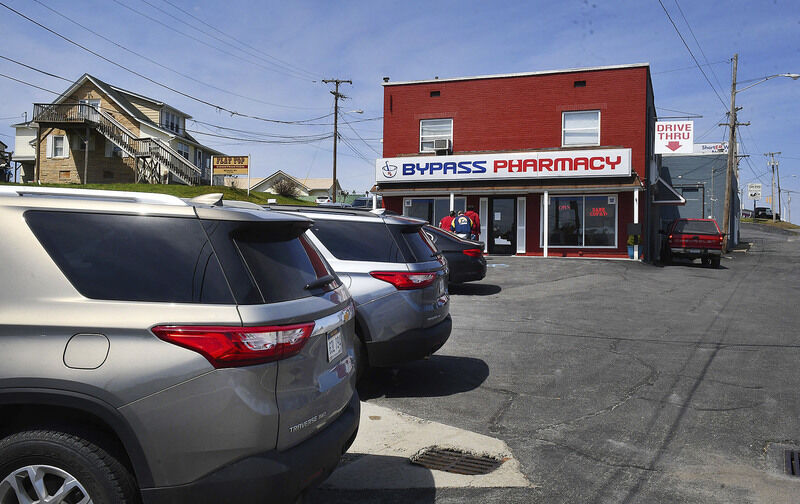 Gary Cunningham, pharmacist of Bypass Pharmacy on Eisenhower Drive in Beckley, prepares to give a Covid-19 vaccination to Tammy Rakes, of Sophia.(Rick Barbero/The Register-Herald)

As of Saturday, May 8, 727,888 West Virginians had received at least one dose of the Covid-19 vaccine with 622,463 having been fully vaccinated, according to the West Virginia Department of Health and Human Resources.

Over a million doses have been administered – 1,319,358 – in the Mountain State, with hundreds of thousands to go before the state reaches herd immunity – if, in fact, it does.

In many counties, the job is left to smaller, nonchain pharmacies.

Matthew and Mary Beth Wade, owners of Eppy’s Drug on Robert C. Byrd Drive – the oldest pharmacy in Beckley – say their business has been dispensing Covid-19 shots since December.

“We had originally signed on to be a distribution point for the vaccination,” said Matthew, whose pharmacy has also partnered with the Beckley Raleigh County Convention Center to dispense vaccines as part of a regional effort.

“We’ve given well over 20,000 shots,” said Matthew. “We have given all three [brands of] shots,” he said referring to the Moderna, Pfizer and Johnson & Johnson vaccines.

When all three vaccines were initially released, pharmacies across the U.S. like Eppy’s in Beckley immediately jumped to action to vaccinate as many Americans as possible.

Eppy’s even paused its remodel plans to start vaccinating the community as soon as vaccine became available.

The pharmacy has given immunizations for years, but the Covid-19 vaccine rollout has been a whole new ball game.

“We had to purchase an ultra-cold freezer… We had to buy gloves and different needles,” recounted owner Matthew Wade. “The state supplies a lot of that, but every now and then, they may not provide the right product. We prefer a more finite needle to make sure we get the right amount of dose out of every vial and not waste any vial,” he said.

One thing the public may not realize is that when a pharmacy opens a Covid-19 vaccine vial, there is more than one shot dosage in the vial, so dispensing pharmacies are trying to be cognizant not to waste any.

“Moderna has 10 shots in each vial. We have to have 10 people to give it to,” explained Matthew. “Once we break open a vial, there is a new guideline of how long it’s good for. It has been our goal all along not to waste doses. They’re extremely valuable,” he said.

Although the vaccines have been out for several months, Matthew says as of the first of the month he is still seeing a “decent demand” for it.

One factor that makes managing the vaccines difficult is the various temperature requirements that each vaccine has.

“The National Guard is handling all that. We’re scheduled for pickup on a certain day,” explained Matthew.

“We bring it to our ultra-cold storage, freeze it, extend the shelf life, and once it comes out of the frozen state, it has another temp requirement. It only stays good for a certain amount of time. The stability life goes down.”

Eppy’s Drug has plenty of Moderna and Pfizer vaccines in stock, and they’re asking interested patients to call to schedule an appointment to get vaccinated.

The pharmacy automatically schedules return appointments for the second of two-dose vaccines.

Matthew says he believes the small independent pharmacies have risen to the occasion to vaccinate as many West Virginians as possible.

“I pulled my team together. We’re fortunate enough to have 40-some employees and were able to give a lot of shots,” he said. “That was the key to getting ahead of the curve – the independent pharmacies."

“It was very limited – not open to the public,” said Cunningham. His pharmacy just started offering vaccines to the public a few weeks ago.

The Beckley pharmacy says it received the Pfizer vaccine from the state first, then the Johnson & Johnson vaccine. They were awaiting the Moderna vaccine during this interview.

During the initial public rollout, Cunningham said he vaccinated about 125 people in three days.

Cunningham also talked about the freezing requirements of the vaccine, saying the Johnson & Johnson is the easiest to maintain in stock, as “it’s good for six months in the refrigerator.”

“Pfizer has to be kept in the freezer,” said Cunningham, adding that anyone age 16 and up can get the Pfizer vaccine currently. “Once it’s unthawed, it can be good for two weeks in the refrigerator.”

Cunningham says there’s now plenty of the vaccine to go around for those who want one.

“We take appointments and we also take walk-ins,” he said.

Cunningham says, when the vaccines were first released this winter, he wasn’t sure if it was going to be feasible for an independent pharmacy like his to dispense the vaccines, due to the freezing requirements – so he’s glad that they were able to make it happen.

“There was some work around that,” he said.

Cunningham said he wants the public to know the vaccine is free to the public.

“There is no cost for the product,” he said.

He also commends the state of West Virginia’s handling of dispersing the vaccine.

“I think it’s been really great,” he said.

When asked about vaccine reactions or things he’s observed since giving the shots, he said, “More or less, the same thing I would see when giving a flu vaccination. Redness in arms. Aches and pains in arms, few fevers with really mild symptoms.”

Cunningham says he hasn’t seen anything crazy in terms of vaccines and has felt strongly enough about it to ensure that his own kids got vaccinated.

“One is 21 (years old) and the other is 17. I wouldn’t give anything to my own kids to jeopardize them, and I felt strongly enough about this to make sure they got the vaccination,” he said.

Cunningham says he also encourages patients to call to make an appointment.