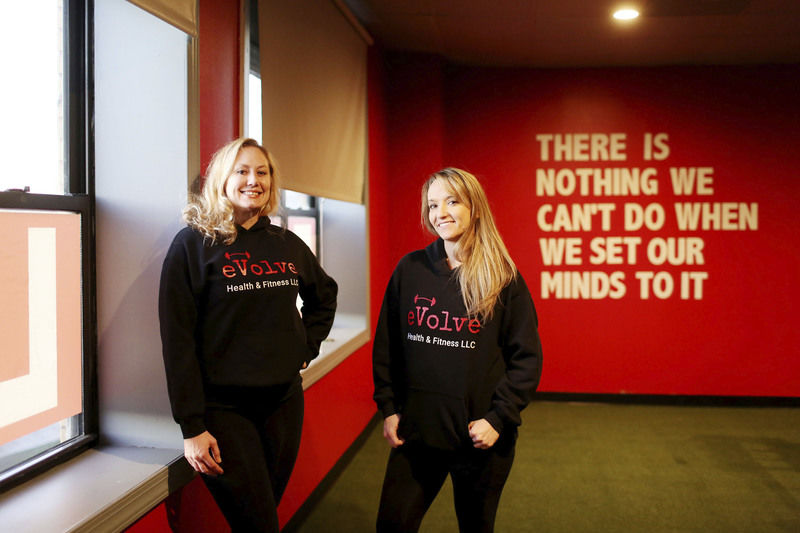 Chris Jackson/The Register-HeraldAmber Pugh and Melissa Hoag, co-owners of Evolve Fitness, at their business in the School of Harmony in Daniels on Thursday. 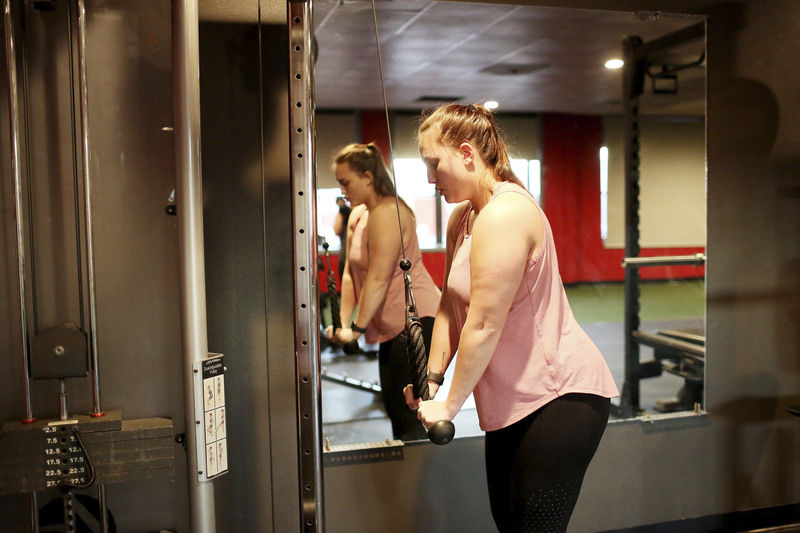 Brooke Lucas, from Shady Spring, works out on one the machines during the Muscle Workshop taught by Amber Pugh at Evolve Fitness. (Chris Jackson/The Register-Herald) 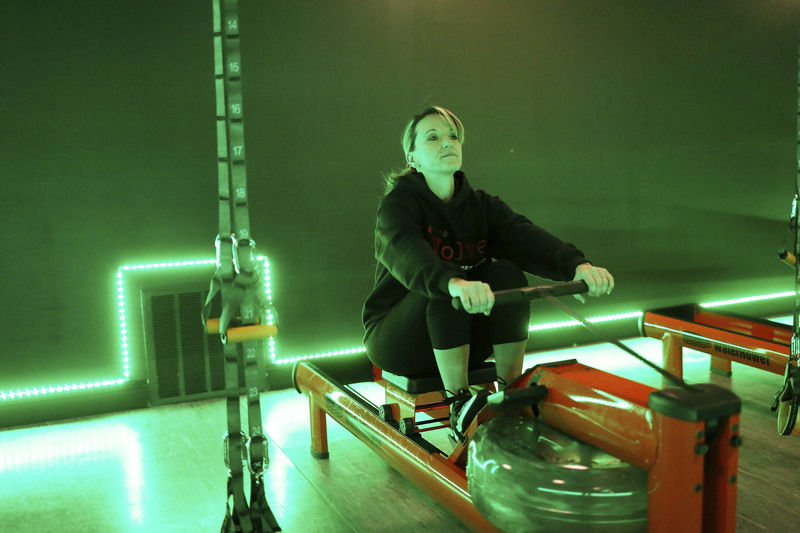 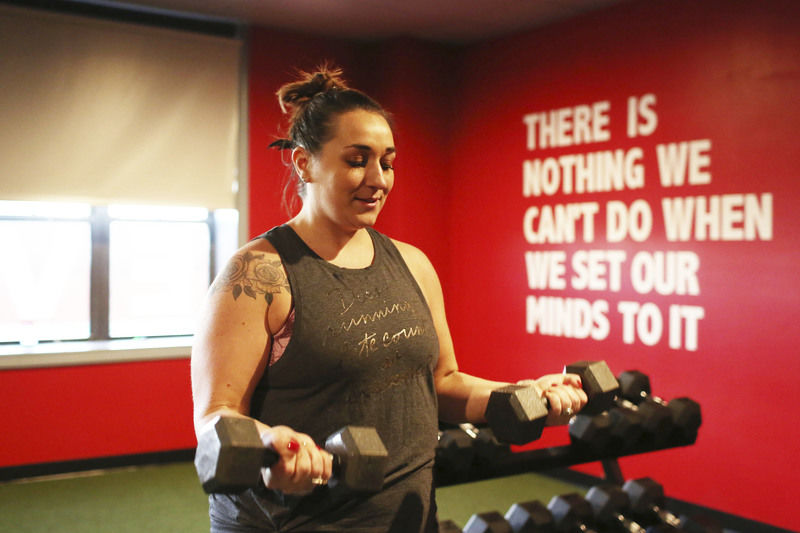 Dani Callaway, from Daniels, works out during the Muscle Workshop taught by Amber Pugh at Evolve Fitness in Daniels. (Chris Jackson/The Register-Herald) 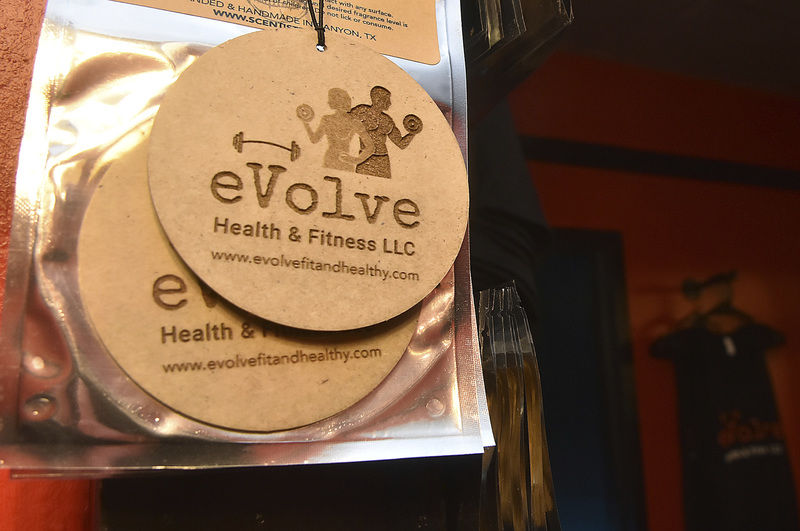 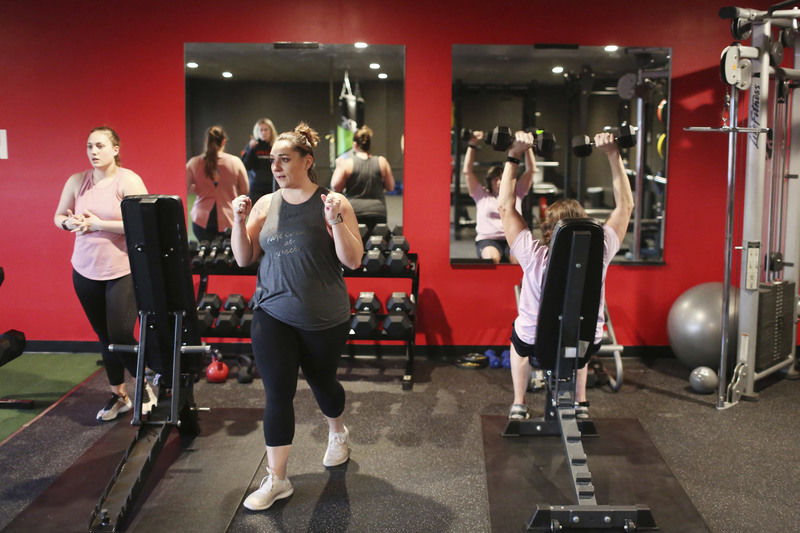 Chris Jackson/The Register-HeraldAmber Pugh and Melissa Hoag, co-owners of Evolve Fitness, at their business in the School of Harmony in Daniels on Thursday.

Brooke Lucas, from Shady Spring, works out on one the machines during the Muscle Workshop taught by Amber Pugh at Evolve Fitness. (Chris Jackson/The Register-Herald)

Dani Callaway, from Daniels, works out during the Muscle Workshop taught by Amber Pugh at Evolve Fitness in Daniels. (Chris Jackson/The Register-Herald)

On Sunday, Dec. 1, business partners Amber Pugh and Melissa Hoag opened the new and improved Evolve Health and Fitness LLC — a gym on the third floor of the School of Harmony at 159 Granby Circle in Beaver.

Both Hoag and Pugh are certified personal trainers through the National Federation of Personal Trainers. Hoag is also a certified nutrition specialist and Pugh is a NPC bikini competitor and muscle guru.

According to Hoag, who had previously been an instructor under Pugh, owning a gym had never been a goal for either woman.

“Everything has just fallen into place,” she said, explaining how their journey began almost overnight.

“One thing led to another and now we are here, but we never saw this coming.”

The idea for the gym was born about two years ago when the gym in which Pugh had worked as an instructor closed.

“I wanted to help the people who were working out there,” she said of the gym, which was smaller but also located in the School of Harmony building. “I couldn’t just leave them.”

The name of the new venture, Pugh said, came from her personal life.

“I was going through a physical evolution, but a mental one as well,” she said. “That’s where the name came from. We are always evolving.”

After a time, Pugh, who knew Hoag from their high school dance team, asked her to join in.

“I instructed there (Evolve’s previous incarnation) for a while, but a couple of months ago we decided that we could do so much more together, as partners,” Hoag explained.

“We decided it was time to expand and make the gym something more.”

“It was having things like that, that I knew we needed to take the next step.”

The new partners prepared for a complete upgrade. They relocated to a higher floor with more room, remodeled the space and replaced all their old equipment.

According to Hoag, the remodel took two months to complete.

“We had a good idea of what we wanted,” she said. “We had opportunities to relocate completely and not just to a different floor, but we have a good relationship with the landlord here and a good space. It just didn’t make sense for us to leave.”

Hoag said the results have been well received.

“Our members said that they knew it was going to be nice, but they were blown away with the before and after with what they were used to having and what they have now.”

She explained that before, gym members only had dumbbells and a few weighted bars to work with. Now they have treadmills, water rowers, strength training equipment and more.

The women say they are pleased with the success Evolve has achieved in the month since opening and both say they are content with what they have created.

“Everyone has what they like, and that’s important,” Hoag said, adding that everyone has to find their niche. “But we are not trying to be a big franchise gym. That’s just not what we are.”

Pugh agreed, saying that more one-on-one connections can be fostered with a smaller gym.

“It’s more intimate and more personalized. Big gym equipment can be intimidating if you don’t know what you’re doing.”

Hoag explained that at Evolve, members are split into small groups of no more than 10 people and are always guided by a personal trainer to ensure they are using the equipment correctly and safely.

“We are not your basic gym,” she said, referring to the gym’s hashtag.

But though they’re content with the size of Evolve Fitness, the women say their goals are ever-changing.

“One thing that I want is to not just be one type of fitness facility,” Pugh said. “We have a little something for everyone.”

She points to the gym’s array of workout classes, which range from beginner to advanced and offer a mix of cardio, Workit Circuit classes, muscle training, yoga, and more.

“We just mesh really well together, and we bring different things to the table,” Hoag said, mentioning the yoga classes led by Julie Bowles. “We have a balance. Amber handles the people aspect and I do the business side… We have something that anyone can enjoy and benefit from.”

Anyone interested in Evolve Health and Fitness can find more information by visiting the gym’s website at www.evolvefitandhealthy.com, by visiting its Facebook page at Evolve Fitness or by calling 304-890-2016.

The gym also offers drop-in classes for individuals who are considering getting a membership but want to try out the facility first.