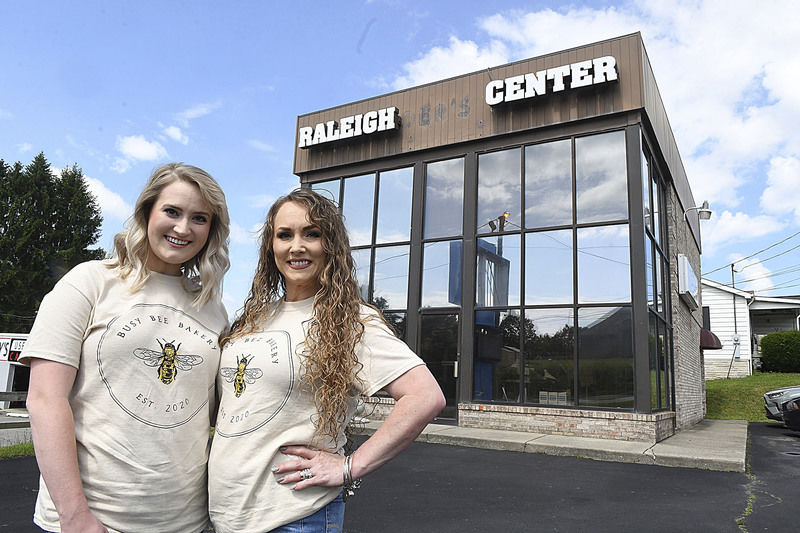 Brittany Bailey-Cline, left, and her mother, Nicky Bailey, started Busy Bee Bakery out of their kitchen only a month ago and have already become so popular that they are taking the bakery to full-time. They recently purchased the old Raleigh Center building on Robert C, Byrd Drive and will soon start renovating the space.(Rick Barbero/The Register-Herald 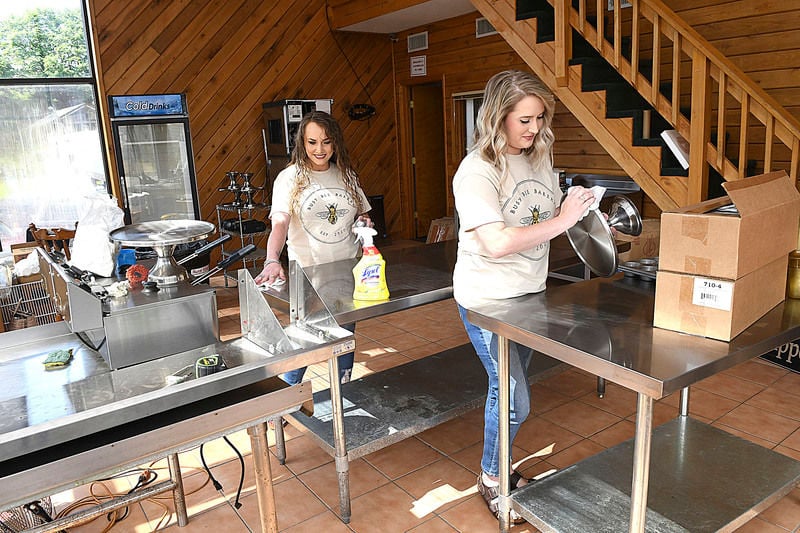 Brittany Bailey-Cline, right, and her mother, Nicky Bailey, started Busy Bee Bakery out of their kitchen only a month ago and have already become so popular that they are taking the bakery to full-time. They recently purchased the old Raleigh Center building on Robert C. Byrd Drive and will soon start renovating the space.(Rick Barbero/The Register-Herald)

Brittany Bailey-Cline, left, and her mother, Nicky Bailey, started Busy Bee Bakery out of their kitchen only a month ago and have already become so popular that they are taking the bakery to full-time. They recently purchased the old Raleigh Center building on Robert C, Byrd Drive and will soon start renovating the space.(Rick Barbero/The Register-Herald

Brittany Bailey-Cline, right, and her mother, Nicky Bailey, started Busy Bee Bakery out of their kitchen only a month ago and have already become so popular that they are taking the bakery to full-time. They recently purchased the old Raleigh Center building on Robert C. Byrd Drive and will soon start renovating the space.(Rick Barbero/The Register-Herald)

Busy Bee Bakery – owned and operated by self-taught baker Brittany Bailey-Cline and her mother, Nicky Bailey – will soon open shop inside the old Raleigh Center building on Robert C. Byrd Drive, where the baking duo hopes to make all of Beckley smile with their unique, homemade cupcake creations.

According to Cline, owning a bakery has always been a dream of hers, but when she graduated from high school in 2014, she chose a career in photography because she felt like that was the best choice for her at the time.

Now, as a published and award-winning photographer, she says pursuing photography first and establishing a clientele base, as well as a good reputation through her work, has helped grow her new bakery business.

In just a little over a month since its Facebook debut, Busy Bee Bakery has gained nearly 2,400 Facebook followers and just over 2,000 likes.

“People are excited we are doing this,” Cline said. “A photo session is more expensive than a cupcake or a cup of coffee. There have been people that have always wanted to support me and my family, but not everyone wants to spend money on pictures. This way they can finally give us that support that they’ve been wanting to.”

Cline said with the spread of Covid-19, all of her wedding shoots for spring and early summer were postponed. She was left with a lot of extra time on her hands to work on her baking skills.

“With the stay-at-home order, I was cooking and baking every day,” Cline said. “It’s just something I always loved to do.”

Keeping a food-focused Facebook account since 2014, Cline said, “That whole time the idea of a bakery was lingering in the back of my head.”

With the help of her mom, who has also helped run the photography business over the past six years, Cline started baking cupcakes out of her kitchen and selling them on the side.

The plan was to continue her photography work full-time and the bakery part-time, but Cline soon discovered that Busy Bee – Cline’s nickname given to her because of her fast-paced, workaholic nature – was becoming more successful than she thought possible.

“Things blew up more than we expected,” Cline said. “We thought we’d do a dozen cupcakes here and there, and before we knew it, we were making 250 to 300 cupcakes an order.

“We quickly grew out of the kitchen,” she said. “It’s hard to fill that many orders with only two people and one oven.”

After deciding to move to photography part-time and focus on other passions, Cline and Bailey purchased the Raleigh Center building with their own funds and closed on the building June 17.

“We want this to be an actual bakery with cakes, cupcakes, bagels, coffee, desserts, and snack foods – a place where people can grab anything they need,” Cline said. “Our goal is to make a place that helps Beckley have a new and fun place to go to, a place that is fun for all ages, somewhere people can bring their kids for a cupcake or where a couple can go out for a date night.”

Although the goal is to expand the bakery’s offering, Cline says Busy Bee will not be offering wedding cakes for quite some time due to her full photography schedule.

“I am booked out until next October with photography contracts, so I can’t do weddings yet, but it is something we have discussed.”

Other additions to the shop’s menu include grab-n-go lunchboxes, cookies, meringue pops, mystery cupcakes, pupcakes for dogs and possibly even Busy Bee merchandise.

“I love to bring fun stuff in and make people want to come see us,” Cline said. “I probably have at least 50 new cupcake ideas, and my family makes lists of their ideas too.”

Cline made sure to emphasize the family-oriented nature of Busy Bee Bakery. Various family members will be helping her and her mom run the business.

“My dad is already excited to start selling coffee and he doesn’t even know anything about coffee,” Cline said. “He just wants to get in there and help as much as he can.

“We are all open-minded and creative. Everyone can do a little bit of everything!”

Until the building is ready, Cline and Bailey will continue to sell cupcakes in boxes of four, six and 12 at $3 a cupcake.

The bakery tries to offer three to four different flavors per order so that customers can try a variety of flavors but will sell single cupcakes once the bakery is open.

Currently, their most popular flavors are their Cotton Candy Cupcake and their signature Honey Bee Cupcake – a honey lavender cupcake that represents the bakery with a chocolate honeycomb decoration and is made with locally sourced honey to support the area’s small businesses.

“We don’t just want to offer plain vanilla. We want interesting and different flavors and decorations,” Cline said. “We try to make them (cupcakes) look gourmet and not something you could see at Walmart. This is something I have wanted for so long and I wanted the reality of it to be perfect.”

Cline will continue photography part-time, stating that she has made too many relationships to stop.

“With pictures, I get to make people smile for a living and with the bakery, I can still do that,” Cline said. “If you’re having a rough morning, that coffee and cupcake could make a big difference in your day. We are just excited to get in there and make friends with everyone in Beckley.”

Busy Bee Bakery, which will be at 3559 Robert C. Byrd Drive, plans to hold an opening celebration once the renovations are complete.