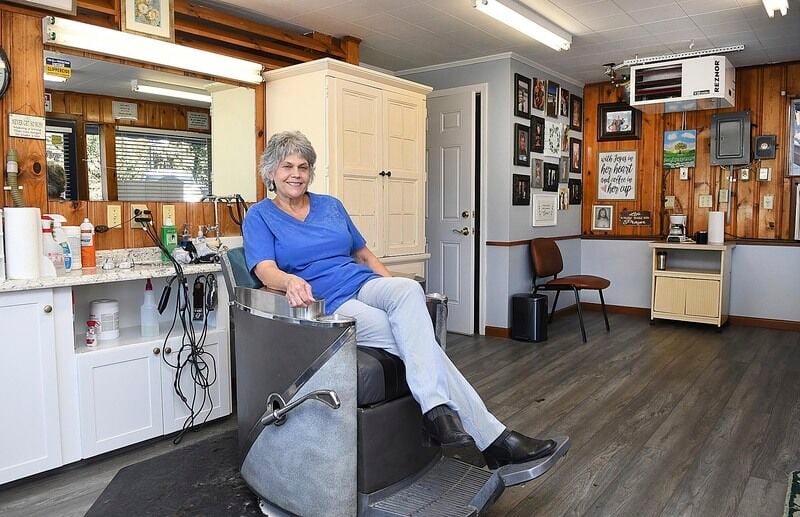 Jamie Carr, barber and daughter of the owner at Valley Drive Barber Shop on Robert C Byrd Drive in Beckley, sits in the barber shop's original 1950s Koken President barber chair. The shop first opened in 1959 and was flooded out July 2, 2019, causing the business to relocate on Johnstown Road for 16 months. The Barber Shop just reopened in its original location Tuesday at 8:30 a.m.(Rick Barbero/The Register-Herald) 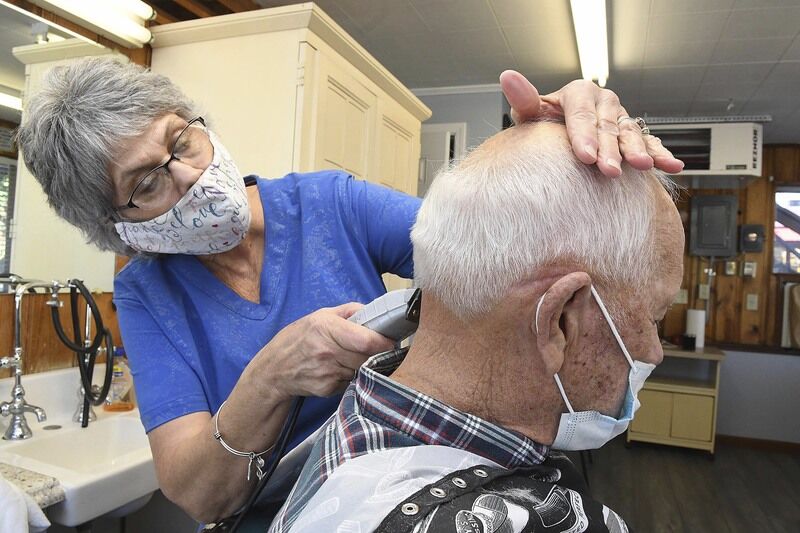 Jamie Carr, barber and daughter of the owner at Valley Drive Barber Shop on Robert C Byrd Drive in Beckley, sits in the barber shop's original 1950s Koken President barber chair. The shop first opened in 1959 and was flooded out July 2, 2019, causing the business to relocate on Johnstown Road for 16 months. The Barber Shop just reopened in its original location Tuesday at 8:30 a.m.(Rick Barbero/The Register-Herald)

Monday was an exciting day for the owner and patrons of the Valley Drive Barber Shop in Beckley.

The business – which is on Robert C. Byrd Drive near downtown and has been a staple in Beckley for more than 60 years – was shut down after enduring severe water damage during flooding on July 3, 2019.

Now retired, VanBuren was a pioneer in the barber profession when she opened the doors, as it was predominantly male-dominated at the time.

Carr has followed in her mother’s footsteps and is now a barber herself.

She has been serving long-standing clients in space rented from Tony’s Beauty Shop while Valley Drive Barber Shop underwent renovations to remediate the flood damage.

“We had to replace our flooring, our walls, basically everything from the windowsills down. There was a lot of water damage,” Carr said.

The business also underwent extensive mold remediation as part of the cleanup.

“The place next door was a real estate business. In the 1970s, they built the RC Mini Bank over a storm drain and it collapsed. It all came back on us,” Carr said, regarding the flood.

Tearing up while recounting the story, Carr reiterated some of the worst details of the ordeal.

“It was horrible. It was such devastation,” said Carr. “The water was all the way to the road. It was almost covering the garage – if you can imagine.”

Carr said the building had water and mud splattered all over the interior after the flood. Reopening has brought the trauma of the flood full circle.

“You can finally see the light at the end of the tunnel. It’s been a long haul,” said Carr. “But I’m here, and this is the path.”

Darrell Painter and his family have been getting their hair cut at the business for decades.

His twin boys, who are now in their 60s, had their first haircut there.

Painter said he followed Carr to her rented location while the business was shut down and will be returning to the normal location upon reopening.

Another customer, Shady Spring resident Mark Creager, says he’s been going to the barber shop since he was about 6 years old.

“It’s just a super place to go,” said Creager. “Great people, family-oriented. I wouldn’t think about getting my hair cut anywhere else.”

“If this was Mayberry, that would be Floyd’s,” he said. “Everybody in town went there. Regardless of your status, you were treated the same there.”

Creager can recall getting fruit striped gum as a reward after getting his hair cut there as a child.

He also remembers Carr’s mother, VanBuren, taking charge of cutting his hair as a child.

“My dad wanted me to get a buzz cut and she talked him out of it,” he recalled. “She said, ‘Dave, you’re not going to do this to this boy!’ She said I’d get made fun of at school and she took up for me.

“They just do a good job there. They’re very professional,” he added.

Valley Drive Barber Shop is open from 8:30 a.m. to 5 p.m. five days a week. It is closed on Wednesday and Sunday.

The shop is accepting new clients.

Clara Jean Gray, 66, of Beckley, WV left this world November 23, 2020 to be with her Heavenly Father. Clara was born March 22, 1954 and was the daughter of the late Junior Clark and Ella Mae Green Toler of Bim, WV. Clara was of the Christian faith for many years. She is survived by a sister …