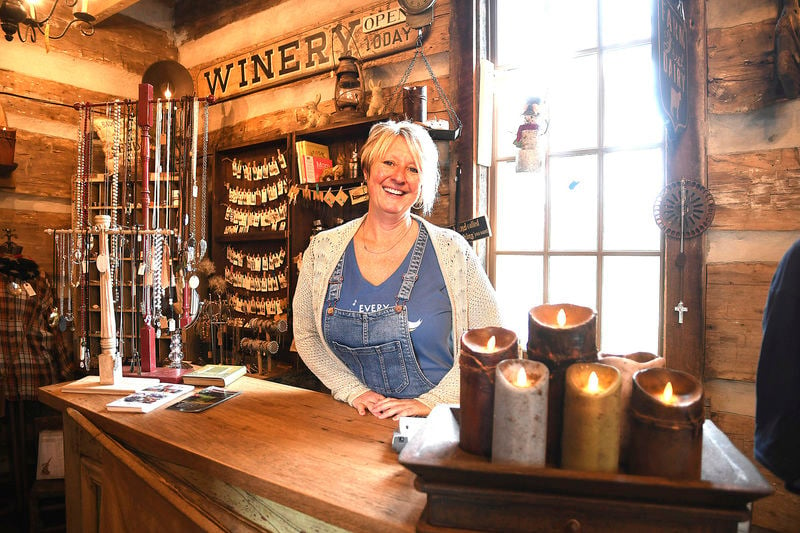 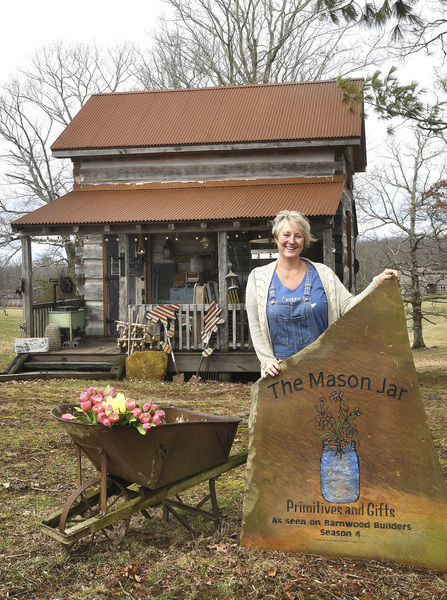 Rick Barbero/The Register-HeraldChristy Jones has a smile and a laugh for visitors who stop by The Mason Jar in Grandview.

Rick Barbero/The Register-HeraldChristy Jones has a smile and a laugh for visitors who stop by The Mason Jar in Grandview.

She’s often behind the counter.

Sometimes she’s on the porch with a cup of coffee, 7-year-old black lab mix Sadie by her side.

Or sometimes customers might find a sign if she’s slipped out to hop on the tractor to mow the grass at her house out back.

Wherever she is, though, Christy Jones has a smile and a laugh for visitors who stop by The Mason Jar in Grandview.

“I enjoy meeting people,” she says. “I’ve always made friends everywhere I go.”

And The Mason Jar has proven no different, as she’s made friends along every step of the way.

She’s had fun doing it, too.

That’s the point, she says, as a breast cancer diagnosis that led to the business also changed her outlook on life.

“It’s convenient being close to home and doing what I like to do,” she says. “This is my speed right now. I’m thankful and I’m blessed.”

Viewers of the popular DIY show “Barnwood Builders” might already know the story of The Mason Jar as Jones and her sister Tammy Harrah appeared on an episode of Seasons 4 and 5.

Jones explains the idea for the business was born years ago from their mutual love for traveling around, shopping at arts and crafts shows and antiquing.

But when Jones, who worked with her sister at the Gene Spadaro Center for Juvenile Detention, lost her job as a secretary and was diagnosed with breast cancer within the same week in 2015, the formula really began to cook.

“I was pretty sick for the better part of a year,” she says.

And the next year, Harrah asked if she would want to go ahead and go into business.

The sisters knew where they wanted to build their business and considered moving their grandfather’s cabin from Pocahontas County, but instead called on Greenbrier County resident and star of “Barnwood Builders” Mark Bowe, to see if he had anything on his boneyard.

Bowe’s team placed the frame of the cabin, originally constructed in Indiana on Nov. 3, 1873. A local contractor was then called in to complete the roof and the porch and Jones and her husband became YouTube-trained cement chinkers, finishing out the walls.

“That was interesting,” she says, laughing. “It took us the better part of three weeks to do.”

Jones even took it upon herself to “antique” a perfectly good new white oak floor.

“I beat it up a little bit,” she says. “I came out with a hammer and chain. I wanted it to look old, so I scratched it up and put black paint on certain spots and then sanded it down and stained it all.

“Jewelry is a big seller for us,” Jones says. “The candles, tarts. And I know this is going to sound crazy but these vintage flannel shirts are big sellers, too. They’re just soft and I can’t keep them when I get them.”

Shoppers can find old books, Marshall and WVU items, Arnett Santas, antique bunnies and stuffed animals made by Jones’ mom, and even antique baseball gloves, an homage to the sisters’ days as softball stars at nearby Shady Spring High School.

But though Jones still says “us” when talking about The Mason Jar, it’s really just her now as she bought Harrah out in August when she decided to return to her job as a counselor.

Jones refers to the property upon which The Mason Jar sits as the “compound of crazy.”

The circumstance that led to her, Harrah, their parents and an uncle living as neighbors, however, is one of southern West Virginia’s biggest tragedies.

Harrah’s husband, Steve, was one of the miners killed in the April 6, 2010, Upper Big Branch Mine explosion.

“We moved out here after Steve died because Zack (Harrah’s son) was only 6,” Jones says, explaining the entire family built houses together to provide a giant support system.

Although Harrah has officially bowed out of The Mason Jar, Jones says it’s still a family affair.

“She still picks things out and goes shopping,” she says.

Their mother covers the counter when she’s needed and her daughter helps out, too.

Her son has even pitched in — though she says she thinks she might have lost money that day due to a cash register error.

She continues to make friends with customers who happen upon The Mason Jar and those who learn about it from “Barnwood Builders.”

“I had a set of sisters from Oregon and they were obsessed with ‘Barnwood Builders,’” she says. They came in and hung out for three hours. They were a hoot. I’ve made friends with them. They send me stuff in the mail. I get cards from them all the time.”

She’s even had “Barnwood Builders” fans from Australia.

“I always know when ‘Barnwood Builders’ starts showing reruns,” she says. “Our Facebook blows up and I have messages from folks all around the world. It’s crazy.”

The Mason Jar is open Wednesday through Saturday from 10 a.m. to 3 p.m. but she posts all of her items on Facebook and Instagram, offers her cell phone number online for appointments, encourages people to message, call and even text.

Jones says her dad sometimes gives her grief over what he perceives to be her “too short” hours and she says she might have even shared his opinion a few years ago.

“I would have probably worried about it a little bit more, but I’ve come to realize life is short and I’m doing this because I like it and I enjoy my job and I enjoy the people but I don’t want to miss out on stuff,” she says.

“I guess I have a different outlook on things now.”

And even with what she calls her “funny” hours, she encourages people to come out, call for an appointment and see what The Mason Jar has to offer.

“We might have something they’re really interested in,” she says. Maybe that keepsake or treasure they’ve been looking for but couldn’t find. A little piece of history or jewelry. A candle to make their house smell good.

“Enjoy some good conversation with me and meet the dog.”

The Mason Jar is at 3823 Grandview Road in Grandview.