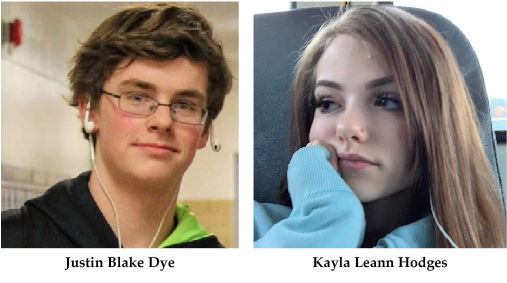 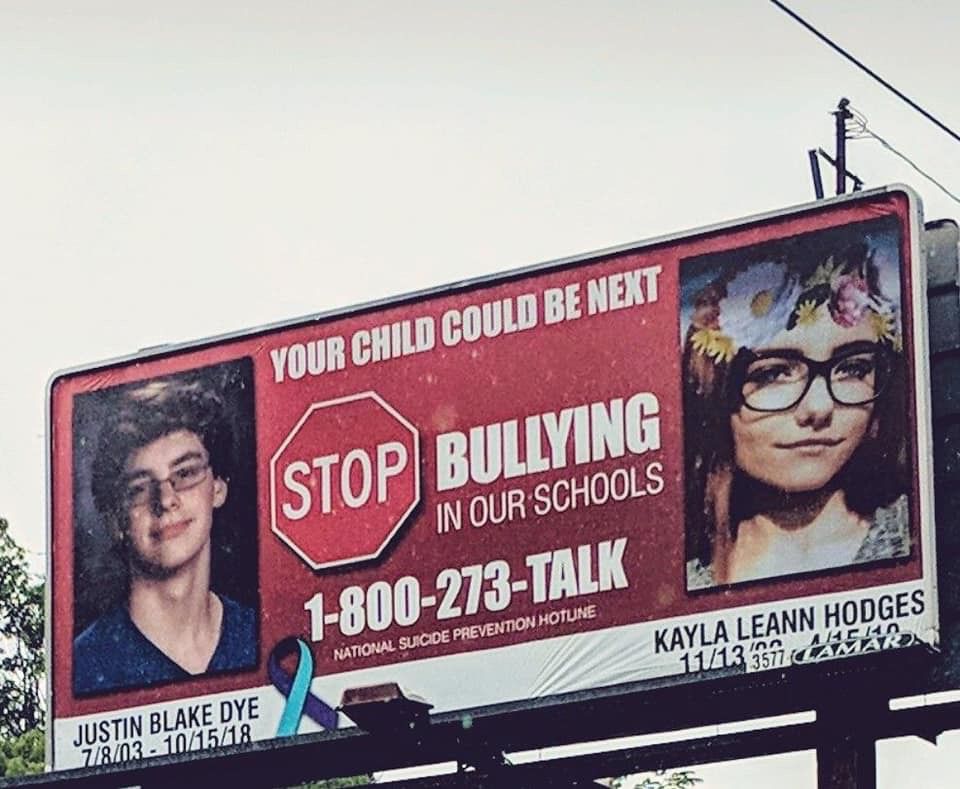 This billboard along Route 460, a main thoroughfare in Tazewell County, displays the images of Justin Dye and Kayla Hodges and offers a hotline number for those being bullied. (Contributed photo)

This billboard along Route 460, a main thoroughfare in Tazewell County, displays the images of Justin Dye and Kayla Hodges and offers a hotline number for those being bullied. (Contributed photo)

Both appear to be typical teens — youths growing up in an era when daily drama is documented on Snapchat, Twitter and a host of other social media sites.

Justin and Kayla were part of the high school scene at Richlands High School — until they decided to take their own lives in separate and unrelated incidents.

Both killed themselves on a Monday, exactly six months apart.

Jason shot himself in the heart with a family firearm.

Kayla hung herself by a noose strung from a tree in the front yard.

In the aftermath of the deaths, family members and those in the community bellowed in outrage. Fingers were pointed at the school, and accusations made.

A billboard along Route 460, a main thoroughfare in the county, displays the teens’ images and offers a hotline number for those being bullied.

But now, a little more than a year after the initial death, the Tazewell County Sheriff’s Office has wrapped up its investigation.

The parents of both children and a family friend are now being charged with felony child neglect for failing to address the teens’ mental health issues.

It was not the his first suicide attempt, according to Tazewell County Sheriff Brian Hieatt and Sgt. Mike Hall, lead detective on the case.

Although Justin lived with his mother, Janet Osbourne, and stepfather, Jason Osbourne, he rarely stayed at home.

Hieatt said Justin would only be at his own house about four nights a month. The rest of the time was spent at the homes of friends.

The teen had a long history of mental health problems, Hieatt said.

“On the day it happened we received a call from Jason who said he wanted to report a suicide,” Hieatt said. Dispatchers at 911 were told the incident was happening on Green Mountain Road.

“Once we started asking questions, he hung up,” Hieatt said. “We had units going.”

Before calling 911 Justin texted his mother and sister. His mother left work and arrived at the house at the same time as a sheriff’s deputy.

“His mom and the officer got to the door and the gun went off,” Hieatt said. “Justin had taken the gun and put it up to his heart.”

Justin was found at the top of the stairs with his phone playing.

“The music playing on the phone was very mournful,” Hieatt said. “It reminded me of a funeral dirge — very macabre.”

Although Justin did not go to school that day, his mother was unaware of his absence.

Hieatt said Justin’s parents said he was bullied, but no evidence was found to corroborate the accusation.

“As we started looking into things, we found he had a history of depression for many years and had attempted suicide multiple time before,” Hieatt said. “Before this happened he had been placed in a hospital after taking muscle relaxants and vodka — a friend provided them. He was found in the woods with no shoes and committed to a psychiatric hospital.”

“He said he would hear voices and see people who weren’t there,” Hieatt said. “In the notes from the hospital he said he was going to kill himself.”

A safety plan signed by Justin’s parents upon his release from the hospital stipulated the importance of the teen taking his anti-depressant medication and that he not be allowed access to any weapons.

“When the came back home his mom and stepdad didn’t make him take his medication,” Hieatt said, adding that the doctor’s notes stated the importance of this.

“The day we found him there were pill bottles thrown around the kitchen,” Hieatt said. “They were full, and had not been refilled.”

Hieatt said Justin’s parents were allowing him to not take his medication.

“The gun he used to kill himself was in the nightstand of his stepfather’s and mother’s bedroom, and the bullets were right there beside the gun,” Hieatt said. “The bedroom door was not locked. The gun was a Rutger .40 caliber with a 14-round clip.”

On the day of his death, Justin emptied the clip leaving only one bullet, which he used to shoot himself in the chest.

Upon investigating the case at the school, Hieatt said Justin was involved in “a couple of fights,” but there was no evidence to suggest a pattern of bullying.

“Bullying happens,” Hieatt said. “But in this case the cause of his suicide can be traced back to his mental illness and neglect from the home.”

Hieatt said Justin sought out counselors at the school who worked with him. “The school helped him get counseling for free.”

“This is someone with a long history of psychiatric problems who said he was going to kill himself,” Hieatt said.

“After it happened they (Justin’s parents) went public pointing fingers at the school system and authorities,” Hieatt said. “After interviews with kids we couldn’t find any bullying.”

Hieatt said the teen’s best friend said he was not bullied at school. “He (Justin) said he hated being at home.”

The felony child neglect charges now facing Justin’s parents, Janet and Jason Osbourne, are punishable by up to 10 years in prison.

Six months to the day after Justin killed himself a second student at Richlands High School committed suicide.

Kayla Leann Hodges, 16, hung herself from the slim branch of a forlorn tree in the front yard of her family’s residence in Raven, Va.

The backdrop of Kayla’s final resting place was a rundown mobile home. Photographs taken as part of the investigation show piles of trash visible around the front yard, porch and exterior.

Hieatt and Hall said Kayla had to step around mounds of empty beer cans in order to reach her bedroom door. However, they noted, the teen took steps to keep her sanctity neat and clean. Even with a broken door that would not close completely, Kayla’s bedroom was the most orderly place in the house.

He smiled when noting how good she was “with the false eyelashes.”

On April 15, Kayla recorded a final video. In it, she is seen filming herself in front of a tree on her lawn.

Wearing a royal blue hoodie and sporting black-rimmed glasses, Kayla states that her Internet is out. Then she calmly says, “I’m actually going to hang myself to be honest. I’ve got my rope ready.”

She then moves the camera to show a noose hanging in the tree behind her.

It was Kayla’s final video.

Kayla lived with her father, Richard Hodges, 52, and a woman once believed to be her grandmother, Suzanne Polkinghorn, 72.

Hieatt said Polkinghorn portrayed herself to be Kayla’s grandmother, but had only lived with the family for two years.

He described her as a “fake grandma,” who was originally from Florida.

Hieatt said Polkinghorn was having a sexual relationship with Hodges, a man who she referred to as her son.

Detailing the day of Kayla’s death, Hieatt said, “We received a call on April 15 from a girl, a friend of Kayla’s, who said she was talking to a friend online from California — it was a mutual friend of her’s and Kayla’s. This teenage girl called 911 and said Kayla told this guy (in California) she was getting ready to kill herself.”

Meanwhile, Kayla’s father arrived home. Hieatt said he initially did not see the teen’s lifeless body in the front yard due to “the junk” blocking his view.

Hieatt said Kayla’s biological mother lived nearby, but she was on probation for an assault charge against Kayla. She had hit the teen with a bag of frozen “tater tots” during an altercation.

“There were a lot of domestics between the biological father and mother,” Hieatt said.

Hieatt said Kayla was a good student who got good grades in school. She had friends at Richlands High, but did not invite them over because she was embarrassed by the family’s living conditions.

Kayla excelled in auto mechanics classes, and had placed in a regional tournament the weekend before her suicide.

She stayed home from school on Monday, the day she committed suicide.

Hieatt said Kayla had been cutting herself for some time, and had been to counselors. “She was diagnosed with suicidal ideology and depression,” he said.

Kayla also had a safety plan in place that included medication and counseling, Hieatt said.

He said Hodges asked doctors to take her off medication so she could get a driver’s license.

In the months prior to her death, Hieatt said Kayla often spoke of killing herself.

“She died in April,” Hieatt said. “In January, February and late March she was trying to choke herself out — it was called the suicide game.”

Hieatt said in March Kayla’s father discovered she was cutting herself again and threatened to take her to the hospital, but then opted to wait until the end of the school year.

“He stopped the counseling, he stopped her from taking her medication and he knew she was cutting on herself a month before she committed suicide and didn’t do anything,” Hieatt said.

“She pretty much fended for herself,” Hall said. “Our intent is that justice is coming.”

“As far as school records show, there was no indications of fighting or problems,” Hieatt said.

Hall said Kayla was known to talk other teens out of committing suicide.

“She would spend hours talking other people out of suicide,” he said.

“She would tell them, ‘I’m the only one who deserves to die,’" Hieatt added.

On one of her social media accounts, Kayla’s user name was “Broken.Makayla.” A screensaver on her cellphone showed an image of a triangle featuring a crying face with a gun in the right hand pointing to the head and rainbow colors exiting the left side.

Hyatt said a friend of Kayla’s on social media said the teen admitted to attempting suicide one to two times a week.

“She had to walk around beer cans to get into her room,” Hieatt said. “The bathroom didn’t have a wall. She had no privacy and low self-image.”

Hieatt noted that for months the community has been asking for answers about the teens’ deaths. Now that the investigation is complete, information can be provided.

“Both attempted suicide multiple times,” he said. “Both had been committed to hospitals, and in both cases the parents were not following up and giving them the care they needed.”

Hieatt emphasized that psychological and mental health problems are prevalent and serious issues that are increasing in our nation.

These are problems, he said, that must be taken seriously.