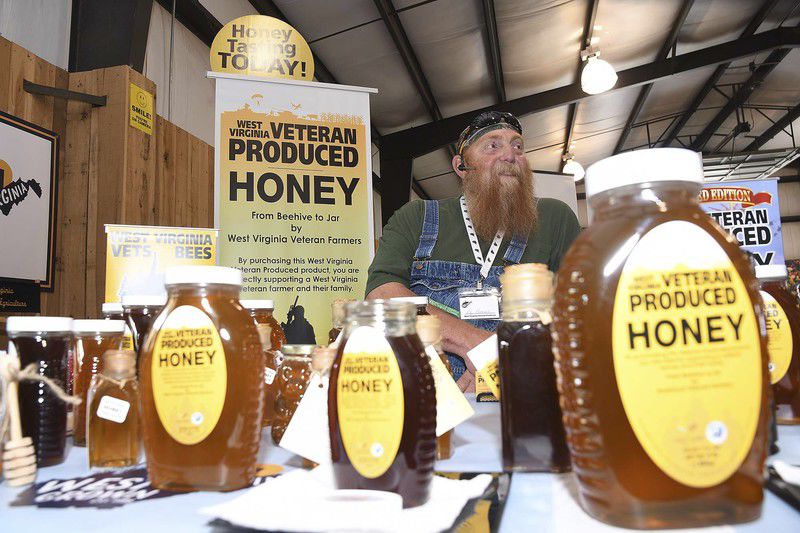 Ed Forney, with WV Veteran Produced, display a variety of honey at the State Fair in Fairlea.(Rick Barbero/The Register-Herald) 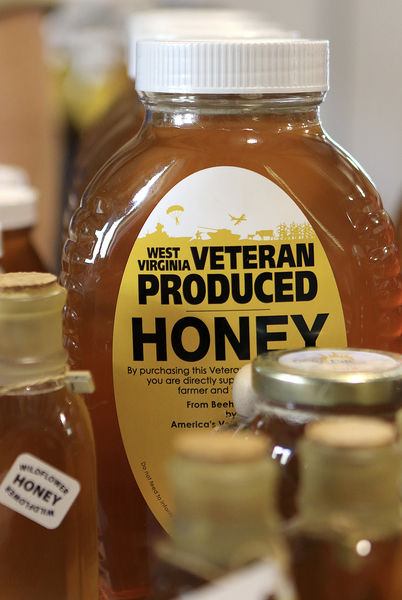 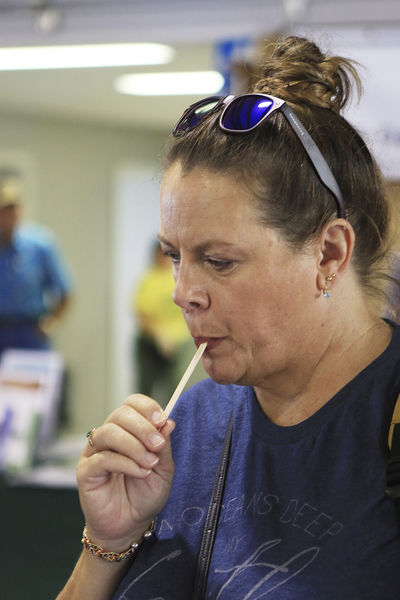 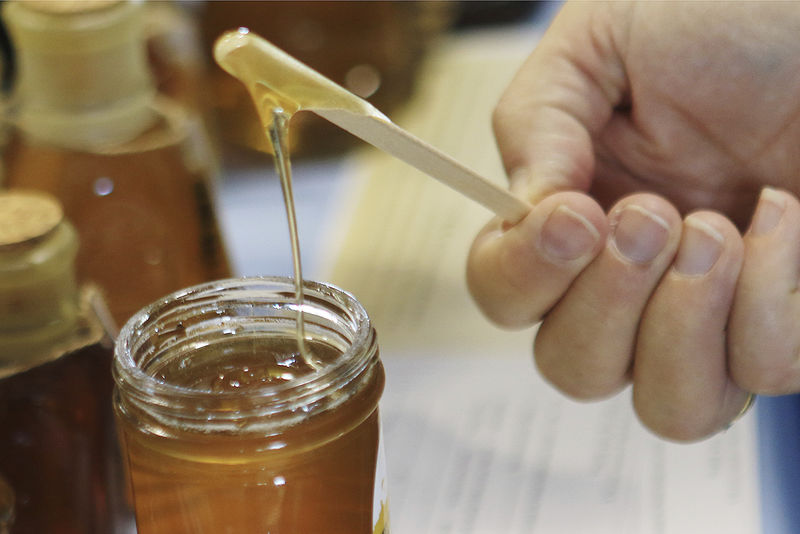 Photo by Jenny Harnish/The Register-HeraldVeterans purchase their own bees, labels and bottles. Their business often becomes a family affair, working together to produce and sell honey. 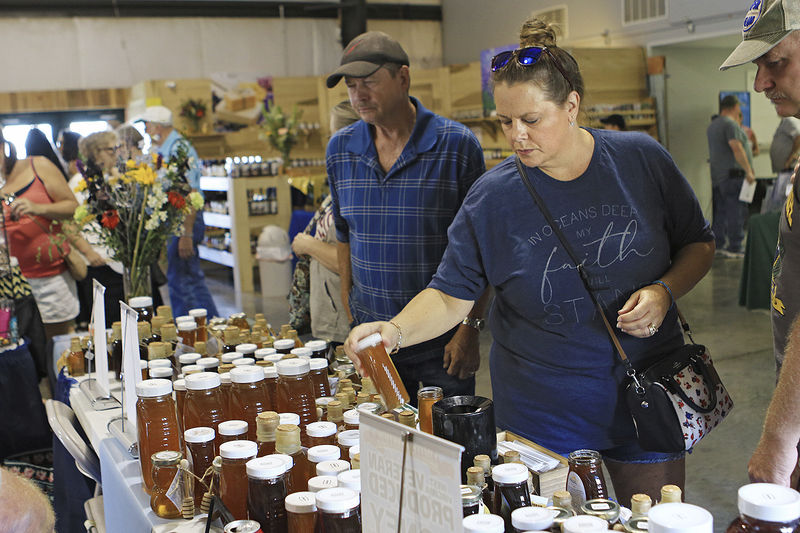 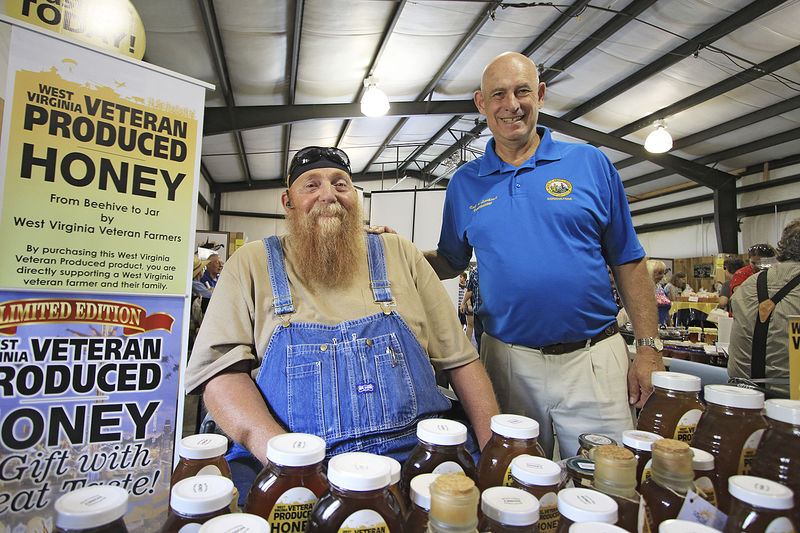 Veteran Ed Forney and West Virginia Department of Agriculture Commissioner Kent Leonhardt hang out at the West Virginia Veteran Produced Honey table in the West Virginia Grown Country Store at the State Fair of West Virginia. The program provides veterans with career opportunities in agriculture and Leonhardt, a veteran, is the driving force behind the program. (Jenny Harnish/The Register-Herald)

Ed Forney, with WV Veteran Produced, display a variety of honey at the State Fair in Fairlea.(Rick Barbero/The Register-Herald)

Photo by Jenny Harnish/The Register-HeraldVeterans purchase their own bees, labels and bottles. Their business often becomes a family affair, working together to produce and sell honey.

Veteran Ed Forney and West Virginia Department of Agriculture Commissioner Kent Leonhardt hang out at the West Virginia Veteran Produced Honey table in the West Virginia Grown Country Store at the State Fair of West Virginia. The program provides veterans with career opportunities in agriculture and Leonhardt, a veteran, is the driving force behind the program. (Jenny Harnish/The Register-Herald)

For 10 days, Ed Forney chatted with each visitor who passed by his table at the West Virginia Grown Country Store at the State Fair of West Virginia.

Forney’s display attracted a lot of attention, too.

Turns out, fairgoers have quite the sweet tooth and there isn’t much sweeter — even at the state fair, where food lurks around every corner — than a bottle of honey.

But it wasn’t just the honey, or the samples Forney offered, that drew the crowd.

The signs around his display helped quite a bit, as people stopped by to learn more about, and purchase, “West Virginia Veteran Produced Honey.”

Although Forney is the face fairgoers and many others might associate with veteran-produced honey, he is actually one of more than 300 veterans in the West Virginia Veterans & Warriors to Agriculture Program.

Forney, a U.S. Army veteran who resides in Hedgesville in Berkeley County, explains his wife Cheryl retired from the WVU Medical Center where she spent a lot of her time working in the trauma center.

“After she retired she got into beekeeping for relaxation,” he said.

As the two built an apiary on their farm, he said they began to look into establishing a veteran’s beekeeping program in the eastern panhandle.

That was 2012, which coincided with the establishment of the state’s Veterans & Warriors Program.

Instead of creating a program, Forney joined one as a participant.

“I was one of the very first folks to sign up for it,” he said.

A few days later, representatives from the Department of Agriculture visited his farm to view his apiary and asked if he would train other veterans.

“We had no idea what we were getting into, but we said we would volunteer,” he said.

Although the program was up and running for several years before West Virginia Department of Agriculture Commissioner Kent Leonhardt took office in 2017, Forney said it was after the change of guard that things began to take off.

“We saw major changes,” he said. “He (Leonhardt) is a veteran and is the driving force behind the program. So it’s been much better communication and a much better partnership. Now that he’s at the helm, there’s more structure.”

There are several reasons for the beekeeping program. One is that it provides a form of therapy for veterans who might be suffering from PTSD.

Leonhardt, a retired Marine lieutenant colonel, actually brings beekeeping experience to the job and said he knows first-hand how calming it can be.

He said those beehives were especially useful when he was on active duty, serving as a liaison to the National Security Agency in the early 1990s.

“I had beehives in my backyard and if I had a very stressful day, I’d get one of those 5-gallon buckets, turn it upside down and I’d watch the bees come and go,” he said. “You wouldn’t believe the calming effect watching how those bees would struggle, laden with pollen, just to get back to the hive and distribute it into the combs.”

That’s what Forney said drew him and his wife to beekeeping, and now other veterans to the program.

“If you’ve ever had a garden, you may go out working for ‘an hour,’ and then four hours later you realize, ‘My goodness, it’s been four hours,’ because you relax so much,” he said. “That’s the thing.”

The men say they hear stories like that often. Stories about how the program has helped people forget their troubles. How it has saved their lives.

“We have people like Eric (Grandon) who say they owe their lives to the program,” Leonhardt said of a Clay County veteran who served in recent Middle East wars. “He found this has become a business for him. He now has a hive at the Culture Center in Charleston and he says he owes it to the program that he didn’t put a gun to his head.”

Forney added, “I’ve been his mentor since the beginning and it’s life-changing. Not just a little bit, but completely life-changing for his family.”

Through beekeepers like Forney, the WVDA offers training to the veterans in the program, and also purchases and provides extraction equipment so that participants can make a go of a business at home.

That’s another part of the program.

Forney explains veterans purchase their own bees, labels and bottles, and their new business often becomes a family affair as they work together to produce and sell honey.

In some cases, Forney sells it for them if a veteran, for example, struggles with crowds or simply doesn’t want to set up and sell.

But in all cases, veterans keep 100 percent of the profits from the honey they produce.

And beekeeping isn’t the only program that falls under the Veterans & Warriors umbrella as, since the legislature funded it for $250,000 in 2018, agrotherapy has been introduced at the Huntington VA.

That program trains veterans in various areas of agriculture.

Also, Leonhardt said the department hopes to set up a mentoring program that places veterans with farms that don’t have an heir. He said the goal is that farm might continue when an owner passes away or retires.

Leonhardt and Forney both said they’re excited about the direction of Veterans & Warriors and of the beekeeping program itself, which has received attention throughout the country and as far away as Angola.

“This veterans program is one of those tools we use to bring everybody together,” Leonhardt said. “It’s a common goal that people feel passionate about. For me it’s very important, being a veteran.

“We want people to talk to us,” he continued, adding the program is not treatment for PTSD and offers no medical advice, but can provide a connection to help. “Sometimes all they (someone in crisis) need to hear is just a voice on the other end of the phone.”

For more information on the West Virginia Veterans & Warriors to Agriculture program call 304-558-2210 or visit www.agriculture.wv.gov.