Jarod Cline and his father, Darrell Cline, next to a plaque honoring Darrell's wife and Jarod's mother, Sherry Cline, at the Wendy's in Beaver on Friday. (Chris Jackson/The Register-Herald) 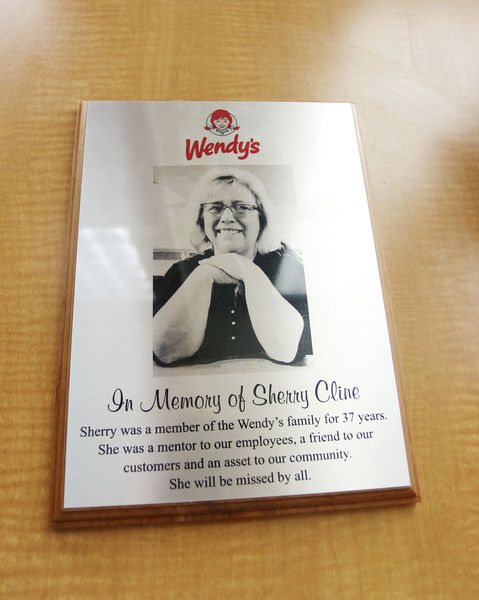 A plaque honoring Sherry Cline at the Wendy's in Beaver. (Chris Jackson/The Register-Herald) 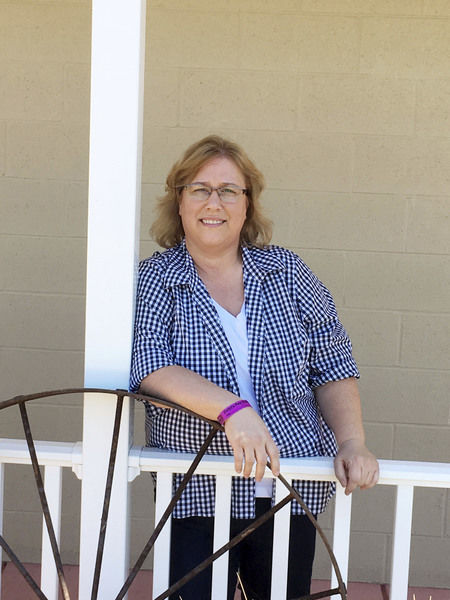 Submitted photoSherry Cline’s hospitality and kindness were qualities that were mentioned many times by her co-workers and employees. 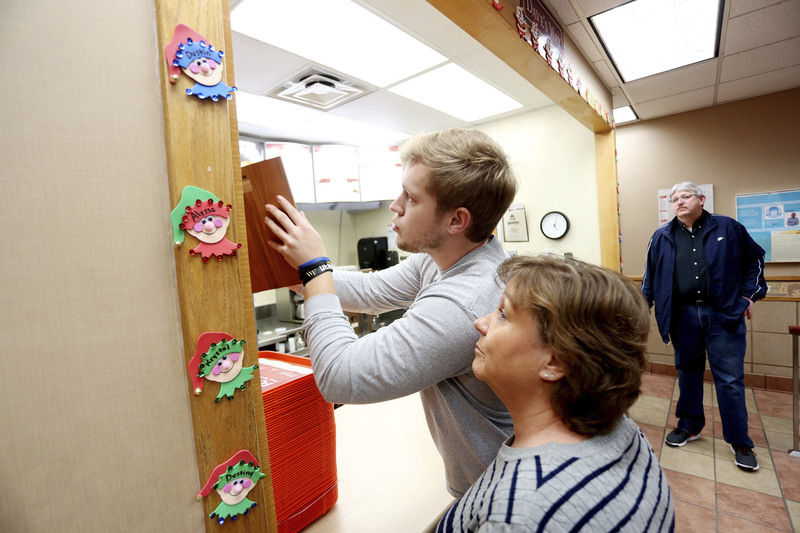 Jarod Cline hangs a plaque on the wall at Wendy's where his mother, Sherry Acord-Cline, worked for more than years before passing away last month, as her twin sister Sherl Grow, center, and Sherry's husband Darrell Cline look on at the restaurant in Beaver on Monday. (Chris Jackson/The Register-Herald)

Jarod Cline and his father, Darrell Cline, next to a plaque honoring Darrell's wife and Jarod's mother, Sherry Cline, at the Wendy's in Beaver on Friday. (Chris Jackson/The Register-Herald)

A plaque honoring Sherry Cline at the Wendy's in Beaver. (Chris Jackson/The Register-Herald)

Submitted photoSherry Cline’s hospitality and kindness were qualities that were mentioned many times by her co-workers and employees.

Jarod Cline hangs a plaque on the wall at Wendy's where his mother, Sherry Acord-Cline, worked for more than years before passing away last month, as her twin sister Sherl Grow, center, and Sherry's husband Darrell Cline look on at the restaurant in Beaver on Monday. (Chris Jackson/The Register-Herald)

Sherry Acord Cline spent 37 of her 55 years in a Wendy’s uniform, including the past 22 as the manager of the Beaver location.

The Grandview resident who, along with her twin sister Sherl Grow, got her start at the Beckley Plaza Wendy’s on her 18th birthday, would still be at work, too, if not for the pancreatic cancer that claimed her life at Bowers Hospice House on Nov. 9.

In an effort to keep Cline’s memory alive, friends, family and co-workers recently gathered at the restaurant for a memorial and plaque dedication.

The ceremony began with a prayer given from Wendy’s district supervisor Sharon Walls, followed by a few words from store owner Ray Blackburn.

“Sherry was fantastic, and I can’t imagine coming to this store without seeing her face,” Blackburn said. “She was an asset to this company and the community, and she always gave back, so tonight we are giving back to her.”

Blackburn then offered for Cline’s son, Jarod Cline, 22, to hang his mother’s plaque, which reads:

“In memory of Sherry Cline. Sherry was a member of the Wendy’s family for 37 years. She was a mentor to her employees, a friend to our customers and an asset to our company. ... She will be missed by all.”

Among those in attendance were longtime customers Jim and Jane Smith.

“Sherry was so gracious and easy to talk to,” Jim said. “She made you feel comfortable.”

“And she was always interested in what you were doing,” Jane added.

Cline’s hospitality and kindness were qualities that were mentioned many times by her co-workers and employees.

April Furrough, a Wendy’s co-manager who was friends with Cline before she began her career at the store, said Cline’s management style was nurturing and almost motherly.

“She was the most selfless person at work and at home,” Furrough said. “She always saw the good side of people. She would give second chances and sometimes even third chances, but she could be stern if she needed to be. I never had a friend like Sherry and I probably never will again.”

“She was a giver, not a taker,” added Wendy’s manager Missy Richards.

Richards began working under Cline’s leadership when she was 16. Over the 20 years that she worked with Cline, Richards worked her way up the Wendy’s chain of command, an accomplishment she says is possible because of Cline’s guidance.

“She was always the first one to tell you if something was wrong, but she would show you how to fix it,” she said. “She was always giving positive comments and I rarely heard her say anything negative. She wanted to build people up and she is everything that I hope to be as a manager.”

Walls, who knew Cline for 50 years, said she spoke with her almost daily.

“She worked for me as part of the crew and went up through the ranks with me until she became general manager,” she said. “We have seen our kids grow up together, we have succeeded together, not succeeded together, cried together and laughed together. The last words she told me before she was getting ready to go to Duke to see about treatment were ‘I love you.’

“All of the people that are here have been with the company for a long time and they all feel like she was their sister and another part of the Wendy’s family.”

Sherl Grow, now the manager of Wendy’s in the Beckley Plaza, said her twin sister never missed a single day of work during her Wendy’s career.

“She was dedicated,” Grow said. “Not many people can say that.”

Cline had been married to her husband Darrell for 29 years. He said her job at Wendy’s played a key role in their lives together.

“We (he and his co-workers) would always come here for our lunch and I’d see her working here,” he recalled. “When she went to the Plaza store, I followed her there and asked her out. We have been together ever since.”

The couple’s son Jarod, with whom Sherry was pregnant when she assumed her position as manager of the Beaver location, echoed his dad’s statements.

“I’d come here with her a couple days a week and stay before I had to go to school,” he recalled. “She made friends here that have turned into our family, and that is irreplaceable.

“She’d really appreciate all of this tonight. She loved the community, and this would mean a lot to her.”

Blackburn said the plaque, which hangs on the wall by the register, will be a permanent fixture, cementing Cline’s legacy for years to come.

“This is her store,” he said. “If I remodel and if I move things, I’ll remodel around her (plaque). It’s not going anywhere, and neither is she.”